Overview of Bile Acids Signaling and Perspective on the Signal of Ursodeoxycholic Acid, the Most Hydrophilic Bile Acid, in the Heart
Previous Article in Journal

Genetic model organisms have the potential of removing blind spots from the underlying gene regulatory networks of human diseases. Allowing analyses under experimental conditions they complement the insights gained from observational data. An inevitable requirement for a successful trans-species transfer is an abstract but precise high-level characterization of experimental findings. In this work, we provide a large-scale analysis of seven weak contractility/heart failure genotypes of the model organism zebrafish which all share a weak contractility phenotype. In supervised classification experiments, we screen for discriminative patterns that distinguish between observable phenotypes (homozygous mutant individuals) as well as wild-type (homozygous wild-types) and carriers (heterozygous individuals). As the method of choice we use semantic multi-classifier systems, a knowledge-based approach which constructs hypotheses from a predefined vocabulary of high-level terms (e.g., Kyoto Encyclopedia of Genes and Genomes (KEGG) pathways or Gene Ontology (GO) terms). Evaluating these models leads to a compact description of the underlying processes and guides the screening for new molecular markers of heart failure. Furthermore, we were able to independently corroborate the identified processes in Wistar rats.
Keywords: Heart failure phenotypes; zebrafish; Wistar rat; semantic multi-classifier systems Heart failure phenotypes; zebrafish; Wistar rat; semantic multi-classifier systems

Human heart failure (HF) is the leading cause of hospitalization in Western world countries and is associated with high morbidity and mortality thereby putting a large burden on health care costs [1]. Alarmingly, over the last decade, heart failure incidence further increased with a rate of about 1% per year mostly attributed to demographic changes and an aging population [2]. However, up to now, the molecular underpinnings of HF are still only poorly defined but are essential for the development and the clinical implementation of targeted and tailored HF therapies. In this context, the use of established model organisms such as mice and zebrafish to model human heart failure now enable the systematic dissection and definition of the molecular etiology of HF. In recent years, we analyzed several zebrafish lines suffering from heart failure which were identified in large-scale zebrafish forward genetics mutagenesis screens [3]. We characterized these HF zebrafish mutants phenotypically and molecularly, identified the respective underlying genetic defects and verified the relevance in human heart failure [4,5,6,7]. Nevertheless, the molecular networks and common denominators of HF in these mutants are still unknown so far.
Findings from such model organisms can now be generalized via computational approaches by identifying important processes. This augments translational approaches which try to bridge the gap between experimental findings in varying model organisms and to transfer this knowledge to humans. They face the challenge of aligning the behavior of homologous genes and signaling pathways across species. The identification of stable marker signatures in binary or multi-categorial comparisons can identify the most specific markers for a phenotype of interest [8,9,10] and subsequently link it to a biological process. The generalizability of diagnostic models can be used to access the importance of a marker signature [11,12,13]. Nevertheless, in very high-dimensional settings (, where n is the dimensionality and m is the cardinality of a dataset) the possibility of reconstructing molecular dependencies in a poorly data-driven way might be limited due to the restricted amount of data. In this case, the training of diagnostic models might be supported by semantic domain knowledge [14,15] on the components of known high-level processes and in turn help to identify them. In this work, we analyze the weak contractility/heart failure phenotype of zebrafish with the help of semantic multi-classifier systems. This model type generates a high-level hypothesis on the underlying processes which is then transferred from one model organism (zebrafish) to another (Wistar rat).

To validate and prove the cardiac relevance of these findings, we next analyzed transcriptional profiles derived from a cellular rat cardiomyocyte hypertrophy model and compared these cardiomyocyte-specific profiles to our whole zebrafish data.
Originally aiming for the identification of new mechanosensitive genes in cardiomyocyte hypertrophy and cardiac remodeling, we subjected neonatal rat ventricular cardiomyocytes (NRVCMs) to cyclic biomechanical stretch for 2, 6, or 24 h (116% at 1 Hz) respectively. RNA isolated from these cells was then analyzed using Agilent’s (Santa Clara, CA, USA) standard Rattus norvegicus 8x60K_60mer mRNA microarrays. The heat map (Figure 3) shows leave one out CV experiments with semantic 1-NN classifiers. Gene expression profiles were thereby restricted to the most frequently selected terms of the Danio rerio experiments. As a negative control we also analyzed the prediction based on randomly selected gene sets. Using 1000 repeats of 100 randomly selected genes from the Wistar rat we achieved a mean accuracy of 51.7% (interquartile range, IQR: [41.7–66.7%]).
Biomechanical stretch is a typical inductor of cardiac hypertrophy [52], which in turn represents an integral part of a process termed cardiac remodeling. In the later phases of cardiac remodeling and in addition to hypertrophy, fibrosis and apoptotic cell death take stage and finally lead to contractile dysfunction [53]. Thus, the cardiomyocyte stretch model used here represents an excellent in vitro model to resemble cardiomyocyte hypertrophy and early stages of cardiac remodeling. Interestingly, the high-level processes revealed by our experiments could also be applied to classify this stretch model of rats.

All procedures and experiments in this study were carried out after appropriate institutional approvals (Tierforschungszentrum (TFZ) Ulm University, No. 0183), which conform to the EU Directive 2010/63/EU. Care and breeding of zebrafish (Danio rerio) was carried out as described in Kustermann et al. [64]. Fractional shortening was determined by measuring the diameters of the ventricle at the end of contraction (systole) and relaxation (diastole) using the zebraFS software (http://www.benegfx.de) [65]. RNAs from seven different weak contractility/heart failure zebrafish mutant lines were extracted (25 embryos/sample) using the RNeasy Plus Mini Kit (Qiagen, Venlo, The Netherlands) at 72 hpf and subjected to RNA sequencing (llumina HiSeq 2000, Core Facility Genomics, Ulm University, Germany). Samples were collected at 72 hpf since at this specific and early time point cardiac contractile dysfunction was nicely established in all lines without visibly affecting overall embryonic development and morphology.
Table 2 provides an overview on the collected dataset. Overall 48 samples of seven different weak contractility heart failure genotypes are available. The dataset splits into 24 pairs of observable mutant phenotypes and the corresponding controls. For each sample, an RNA-Seq profile of 31,953 measurements is recorded. A mutant was categorized as a member of weak contractility superclass if it demonstrated significantly reduced ventricular fractional shortening (FS) measurements compared to their wild-type siblings Figure 4; see also [4,5,18,21]):

The weak contractility phenotype is analyzed in a binary classification experiment. We are interested in identifying a diagnostic model, a classifier, that allows the distinction between observed mutant phenotype () or control healthy phenotype () on a sample-wise level. In this context, each sample will be represented as a feature vector and interpreted by the classifier. A diagnostic model will be seen as a function mapping from the feature space to the space of class labels .
A classifier is adapted for a classification task in a data-driven initial learning phase
Here, the final classification model is chosen from a predefined concept class and adapted according to a set of labeled training examples . The subscript will be omitted if not necessary. In a second step, the generalization performance of a trained classifier is estimated on an independent set of test or validation samples . For our experiments the empirical accuracy, sensitivity and specificity are chosen
Here, and denote a restriction of to the samples of class 1 or 0, respectively.
Each binary classification experiment is designed as a CV [67]. That is, the overall set of samples is partitioned into folds of approximately equal size. They are used to generate independent pairs of training sets and validation sets for individual classification experiments. The ith classifier is evaluated on . The average accuracy, sensitivity and specificity are reported. To minimize sampling effects the mean values of permutations of are provided. Experiments are performed with the R-package (www.r-project.org) TunePareto [68].

We use Semantic Multi-Classifier Systems (S-MCS) for our experiments [14,15]. A S-MCS is a decision ensemble that integrates the predictions of several base classifiers where into one final prediction.
Each base classifier operates on an individual feature signature . It is restricted to a limited set of input signals . Each signature is coupled to a commonly accepted interpretation (term) and chosen from a predefined vocabulary (Figure 5a). This selection process is based on an internal CV on the training set of the corresponding base classifier. The terms with the individual highest accuracies are chosen (Figure 5b). For our experiments we chose an unweighted majority vote as combining scheme and an ensemble size of three base classifiers (Figure 5c). Semantic multi-classifier systems are trained for two vocabularies: the collection of KEGG pathways [69] and the GO terms [70].

As a base classifier the one nearest neighbor classifier (1-NN) is chosen [71]. The 1-NN is a member of the prototype-based classification k-NN algorithms which predict the class label of a query sample in the following way
Here, denotes the k nearest neighborhood of in a set of prototypes and the set of all pairwise Euclidian distances between and . The class label of is determined via a majority vote of the class labels of the selected candidates. In the case of 1-NN, and .

4.6. Pathways from Kyoto Encyclopedia of Genes and Genomes

The Kyoto Encyclopedia of Genes and Genomes comprises a collection of signaling pathways for a large spectrum of model organisms [69]. For Danio rerio 167 signaling pathways are available. For our experiments we restrict ourselves to those pathways that consist of at least 10 components (152 terms).

The Gene Ontology is one of the largest attempts to construct an organized and standardized terminology for the categorization of gene products [70]. Its vocabulary is organized in a hierarchical ontology covering three different domains: biological processes, associated cellular components and molecular functions. Most of these terms are linked to manually curated gene lists. We again use those GO terms that comprise at least 10 genes in Danio rerio (4354 terms). 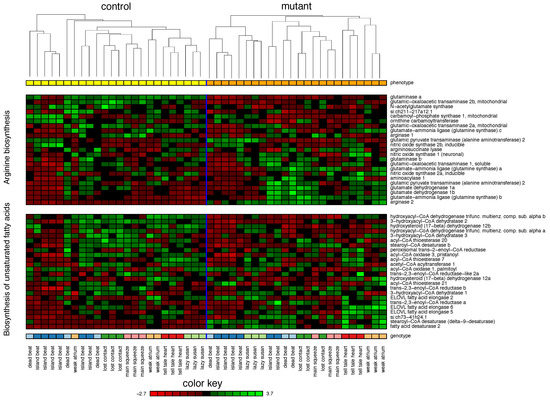 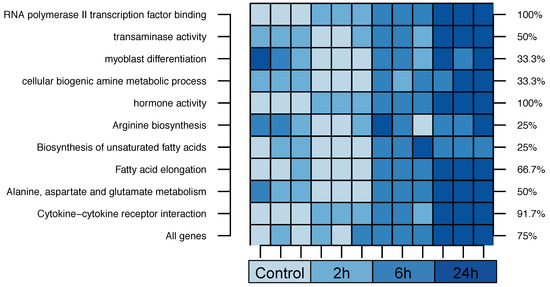 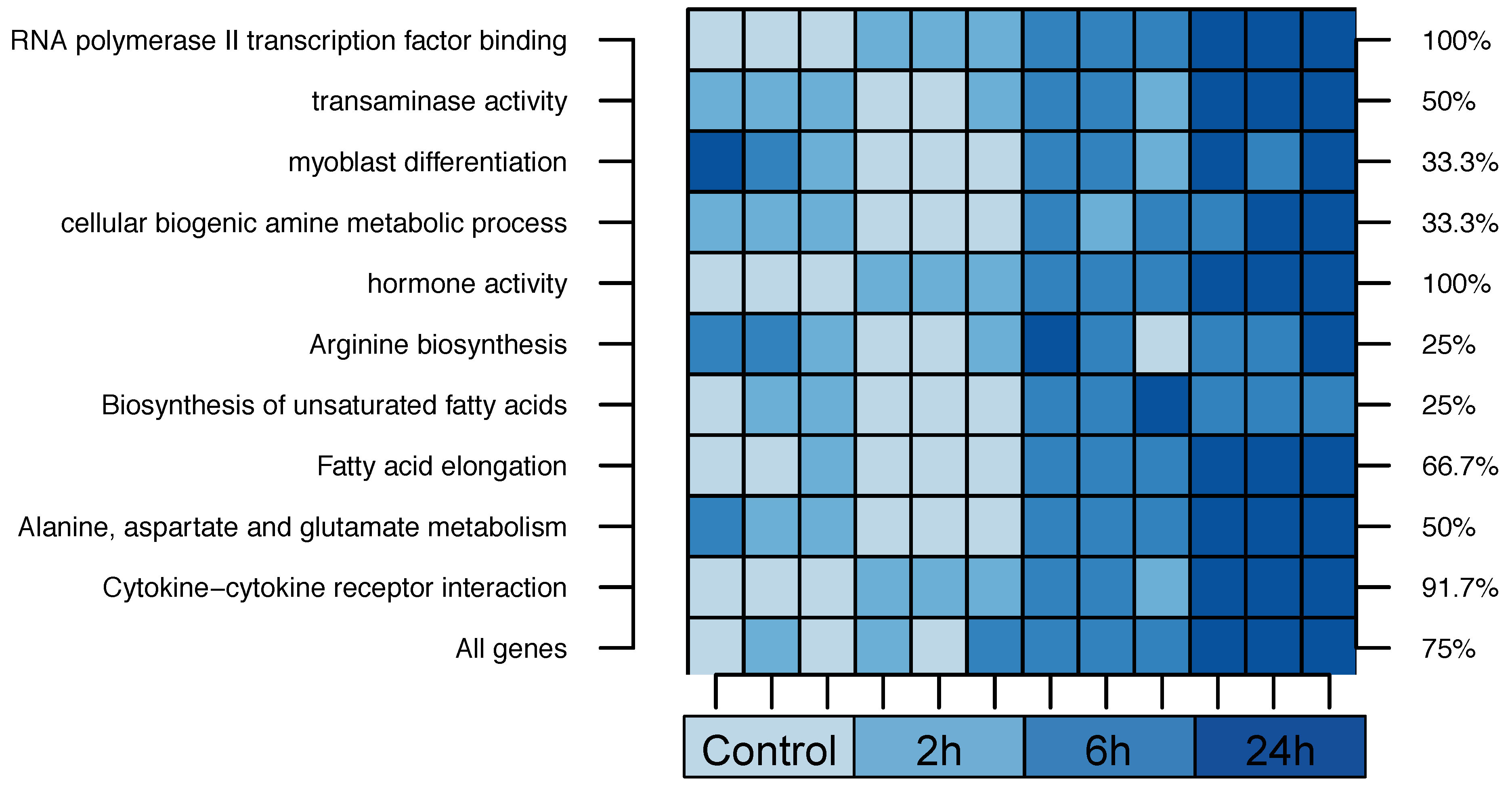