Role of Milk-Derived Antibacterial Peptides in Modern Food Biotechnology: Their Synthesis, Applications and Future Perspectives
Next Article in Special Issue

In Silico Studies on Compounds Derived from Calceolaria: Phenylethanoid Glycosides as Potential Multitarget Inhibitors for the Development of Pesticides
Previous Article in Journal

The proteasome is an intracellular complex that degrades damaged or unfolded proteins and participates in the regulation of several processes. The immunoproteasome is a specialized form that is expressed in response to proinflammatory signals and is particularly abundant in immune cells. In a previous work, we found an anti-inflammatory effect in a diterpenoid extracted from the octocoral Pseudopterogorgia acerosa, here called compound 1. This compound prevented the degradation of inhibitor κB α (IκBα) and the subsequent activation of nuclear factor κB (NFκB), suggesting that this effect might be due to inhibition of the ubiquitin-proteasome system. Here we show that compound 1 inhibits the proteasomal chymotrypsin-like activity (CTL) of murine macrophages in the presence of lipopolysaccharide (LPS) but not in its absence. This effect might be due to the capacity of this compound to inhibit the activity of purified immunoproteasome. The compound inhibits the cell surface expression of major histocompatibility complex (MHC)-I molecules and the production of proinflammatory cytokines induced by LPS in vitro and in vivo, respectively. Molecular docking simulations predicted that compound 1 selectively binds to the catalytic site of immunoproteasome subunits β1i and β5i, which are responsible for the CTL activity. Taken together these findings suggest that the compound could be a selective inhibitor of the immunoproteasome, and hence could pave the way for its future evaluation as a candidate for the treatment of inflammatory disorders and autoimmune diseases. View Full-Text
Keywords: marine diterpenoid; proteasome inhibitors; immunoproteasome marine diterpenoid; proteasome inhibitors; immunoproteasome
►▼ Show Figures 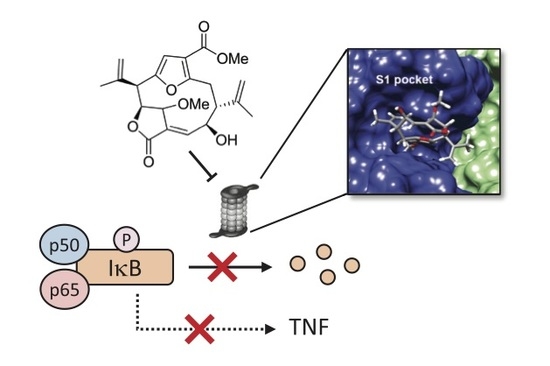