TOR is a serine/threonine protein kinase that assembles into distinct TOR Complexes 1 and 2 (TORC1 or TORC2) to regulate cell growth. In mammalian cells, a single mTOR incorporates stably into mTORC1 and mTORC2. By contrast, in Saccharomyces cerevisiae, two highly similar Tor1 and Tor2 proteins exist, where Tor1 assembles exclusively into TORC1 and Tor2 assembles preferentially into TORC2. To gain insight into TOR complex assembly, we used this bifurcation in yeast to identify structural elements within Tor1 and Tor2 that govern their complex specificity. We have identified a concise region of ~500 amino acids within the N-terminus of Tor2, which we term the Major Assembly Specificity (MAS) domain, that is sufficient to confer significant TORC2 activity when placed into an otherwise Tor1 protein. Consistently, introduction of the corresponding MAS domain from Tor1 into an otherwise Tor2 is sufficient to confer stable association with TORC1-specific components. Remarkably, much like mTOR, this latter chimera also retains stable interactions with TORC2 components, indicating that determinants throughout Tor1/Tor2 contribute to complex specificity. Our findings are in excellent agreement with recent ultrastructural studies of TORC1 and TORC2, where the MAS domain is involved in quaternary interactions important for complex formation and/or stability. View Full-Text
Keywords: HEAT repeats; mTOR pathway; rapamycin; AGC kinases HEAT repeats; mTOR pathway; rapamycin; AGC kinases
►▼ Show Figures 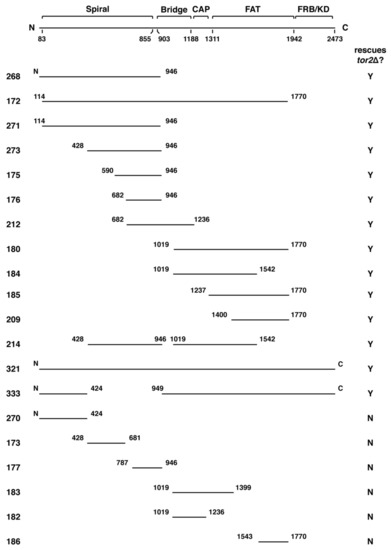