Anandamide is a lipid neurotransmitter derived from arachidonic acid, a polyunsaturated fatty acid. The chemical differences between anandamide and arachidonic acid result in a slightly enhanced solubility in water and absence of an ionisable group for the neurotransmitter compared with the fatty acid. In this review, we first analyze the conformational flexibility of anandamide in aqueous and membrane phases. We next study the interaction of the neurotransmitter with membrane lipids and discuss the molecular basis of the unexpected selectivity of anandamide for cholesterol and ceramide from among other membrane lipids. We show that cholesterol behaves as a binding partner for anandamide, and that following an initial interaction mediated by the establishment of a hydrogen bond, anandamide is attracted towards the membrane interior, where it forms a molecular complex with cholesterol after a functional conformation adaptation to the apolar membrane milieu. The complex is then directed to the anandamide cannabinoid receptor (CB1) which displays a high affinity binding pocket for anandamide. We propose that cholesterol may regulate the entry and exit of anandamide in and out of CB1 by interacting with low affinity cholesterol recognition sites (CARC and CRAC) located in transmembrane helices. The mirror topology of cholesterol binding sites in the seventh transmembrane domain is consistent with the delivery, extraction and flip-flop of anandamide through a coordinated cholesterol-dependent mechanism. The binding of anandamide to ceramide illustrates another key function of membrane lipids which may occur independently of protein receptors. Interestingly, ceramide forms a tight complex with anandamide which blocks the degradation pathway of both lipids and could be exploited for anti-cancer therapies. View Full-Text
Keywords: endocannabinoid; lipid raft; cholesterol; ceramide; sphingolipid; cannabinoid receptor; molecular docking; protein-lipid interaction endocannabinoid; lipid raft; cholesterol; ceramide; sphingolipid; cannabinoid receptor; molecular docking; protein-lipid interaction
►▼ Show Figures 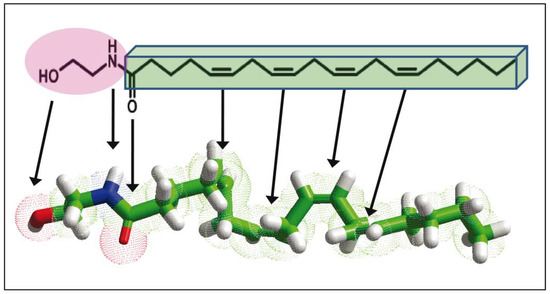