Alcohol and the Intestine

Jessica A. Williams and

Alcoholic liver disease (ALD) is a global health problem that is caused by heavy alcohol consumption in addition to other environmental, lifestyle, and genetic factors. ALD causes approximately two million deaths per year [1], and alcohol abuse leads to a variety of liver pathologies including fatty liver, alcoholic hepatitis, fibrosis, cirrhosis, and hepatocellular carcinoma (HCC) [2,3].
The best therapeutic options for ALD patients are abstinence from alcohol or liver transplantation. Abstaining from alcohol can reverse ALD in early disease states and can also decrease mortality rates [4]. Other therapies are used to treat ALD patients such as corticosteroids and tumor necrosis factor alpha (TNFα) inhibitors, but they are not successful for all patients [5,6,7]. Therefore, liver transplantation is currently the best option for decreasing mortality in ALD. However, the option for liver transplantation is only given to those with severe disease and/or to patients who have been sober for at least 6 months [8]. Therefore, a better understanding of the mechanisms underlying ALD pathogenesis and progression is greatly needed.
Macroautophagy (hereafter referred to as autophagy) is a protective and evolutionarily conserved process that degrades various macromolecules in the lysosome [9], and it can be both a selective and non-selective process. Non-selective autophagy, also known as bulk autophagy, occurs during starvation to provide amino acids that can be used for energy production [10]. In addition, degradation of lipids by autophagy produces free fatty acids that can be used to make energy by β-oxidation in the mitochondria [11]. Selective autophagy removes damaged organelles and protein aggregates using specific receptors, and it can occur in both nutrient-rich and poor conditions [12]. The role of autophagy in ALD has been recently reviewed [3,13,14,15,16,17]. We and others have shown that autophagy protects against alcohol-induced liver injury [13,18,19], and protection is due to selective removal of damaged mitochondria and lipid droplets by mitophagy and lipophagy, respectively [13,18]. Mitophagy is a form of selective autophagy specific for degradation of damaged mitochondria in the lysosome [20,21,22], and lipophagy is a form of selective autophagy specific for the degradation of lipid droplets [11,23,24,25]. Regulation of the lipophagy pathway is not yet understood but may require the GTPase Rab7 [26]. The role of mitophagy in protection against ALD and mechanisms for its regulation are the main foci of this review.
Mitochondria are the major sites of ATP production and are also involved in heme synthesis, fatty acid oxidation, maintenance of calcium levels, and initiation of cell death [27], and mitochondrial dysfunction leads to progression of ALD [28,29,30]. Mitochondria maintain their homeostasis by various mechanisms. Mitochondria have their own proteolytic system, which degrades misfolded proteins [31,32]. Mitochondria also utilize the proteasome to degrade damaged outer mitochondrial membrane proteins [33]. In addition, damaged mitochondria can be segregated from healthy mitochondria by mitochondrial fission, and healthy mitochondria can combine their components by mitochondrial fusion [34,35]. Moreover, mitochondria can degrade oxidized proteins via mitochondria-derived vesicles, which bud off damaged mitochondria and are degraded in the lysosome along with their contents [36,37]. Furthermore, mitophagy degrades damaged mitochondria in the lysosome [20,21,22,38], which is an important mechanism for protection against alcohol-induced liver injury and steatosis [13,18,39]. Formation of mitochondrial spheroids may serve as an alternate pathway for removal of damaged mitochondria [38,40,41,42] and may also protect against alcohol-induced liver injury. Mitophagy and formation of mitochondrial spheroids as protective mechanisms against alcohol-induced liver injury and steatosis are discussed in this review.

Alcohol metabolism has been extensively reviewed previously [43,44,45]. Briefly, alcohol metabolism occurs mainly in the liver, and alcohol is metabolized by both oxidative and non-oxidative pathways. Oxidative pathways are the predominant mechanism for alcohol metabolism. The most common pathway for oxidative metabolism in the liver is catalyzed by alcohol dehydrogenase (ADH), which metabolizes alcohol into acetaldehyde. Alcohol can also be oxidized into acetaldehyde by Cytochrome P450 2E1 (CYP2E1) and catalase [43,44]. Acetaldehyde is a highly reactive metabolite that forms adducts with other macromolecules. Proteins adducted by acetaldehyde have altered function, which sometimes results in loss of activity and subsequent liver injury [46]. Acetaldehyde is further metabolized into acetate and acetyl-CoA for use in metabolic pathways by aldehyde dehydrogenase (ALDH), which has two isoforms: cytosolic ALDH1 or mitochondrial ALDH2. Alcohol metabolism by ADH and ALDH require reduction of NAD+ to NADH. Therefore, oxidative alcohol metabolism results in a decreased NAD+/NADH ratio, leading to down-regulation of metabolic pathways that require NAD+ as a co-factor [43,44]. In addition, metabolism of alcohol by CYP2E1 results in production of reactive oxygen species (ROS), which leads to liver injury [47,48]. For non-oxidative alcohol metabolism, alcohol is esterified to fatty acid ethyl esters(FAEEs) by FAEE synthase or alcohol interacts with Phospholipase D to form phosphatidyl ethanol [44,45]. FAEEs may exacerbate alcohol-induced liver injury because they increase alcohol-induced cell death in HepG2 cells [49], but the effect of phosphatidyl ethanol formation in the liver is currently unknown.

The first stage of ALD is hepatic steatosis, which is characterized as an abundance of fat in hepatocytes and develops in most heavy alcohol consumers. Steatosis is reversible with a few weeks of abstaining from alcohol, but it can further develop into steatohepatitis, fibrosis, cirrhosis, and even HCC with prolonged alcohol abuse in combination with other factors such as race, sex, comorbidities, genetics, and lifestyle factors [2]. Alcoholic steatohepatitis is characterized by hepatic inflammation and injury in addition to steatosis and also includes fibrotic and cirrhotic disease states. Most patients who stop using alcohol once cirrhosis has developed have a survival time of approximately 5 years after diagnosis [8,50,51]. Approximately 20% of all cases of liver cirrhosis in the United States are related to alcohol abuse [52], and an estimated 5 million people in the US are thought to have alcohol-induced steatohepatitis [53]. Cirrhosis is the end stage of ALD, and it is characterized by massive fibrosis and the presence of regenerative nodules in the liver in addition to loss of liver function. Fibrosis is an exacerbated wound-healing response induced by liver injury that is characterized by an accumulation of the extracellular matrix protein collagen, which is produced predominantly by hepatic stellate cells. Continuous activation of this wound healing response leads to cirrhosis of the liver, which can eventually progress to HCC [8,50,51,54].
In addition to heavy alcohol consumption, several other factors contribute to progression of ALD from steatosis to more severe liver pathologies including race, sex, lifestyle, drinking pattern, genetics, and comorbidities with other diseases. African-Americans and Hispanics are more prone to alcohol-induced cirrhosis than Caucasians [55,56], and women are more likely to progress beyond alcohol-induced steatosis compared to men after prolonged alcohol consumption [57,58,59]. Comorbidity with obesity [60,61,62,63] or Hepatitis C Virus [64,65,66] also increases ALD severity and promotes disease progression. Genetic polymorphisms and epigenetics also contribute to ALD progression and severity. Polymorphisms in ADH2, ADH3, ALDH2, and CYP2E1 [67,68] enhance ALD progression, and alcohol alters epigenetics and modifies histones in the GI tract and liver, which increases ALD severity [69]. Finally, lifestyle choices and drinking patterns affect ALD progression. For example, smoking exacerbates, while drinking coffee protects against, progression to liver cirrhosis [70,71,72,73,74]. The amount and duration of alcohol use in addition to the type of alcohol consumed and the pattern of alcohol consumption all also have roles in progression of ALD. Women who drink more than 40 grams of alcohol per day and men who drink more than 80 grams per day are more likely to develop ALD, but some may develop ALD by consuming less amounts of alcohol. In addition, wine drinkers may be less likely than beer or liquor drinkers to develop alcoholic cirrhosis, but this is controversial. Heavy daily drinking also increases the risk for developing ALD in comparison to weekly binge drinking [54]. 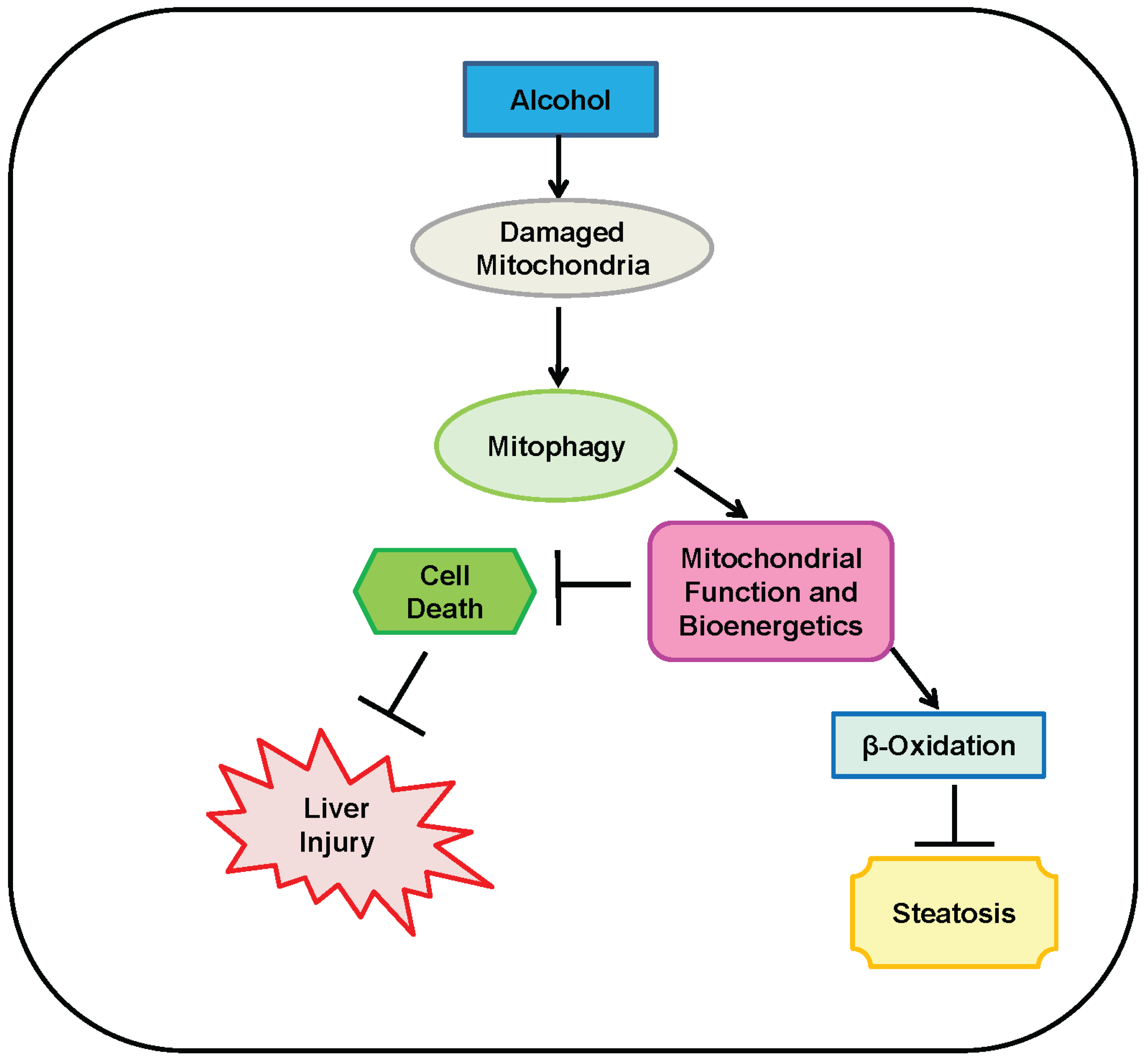 6. Role of Parkin and Parkin-Dependent Mitophagy in Protection against Alcohol-Induced Liver Injury and Steatosis in Mice

8. Mitochondrial Spheroids May Be a Novel Mechanism of Protection against Alcohol-Induced Liver Injury 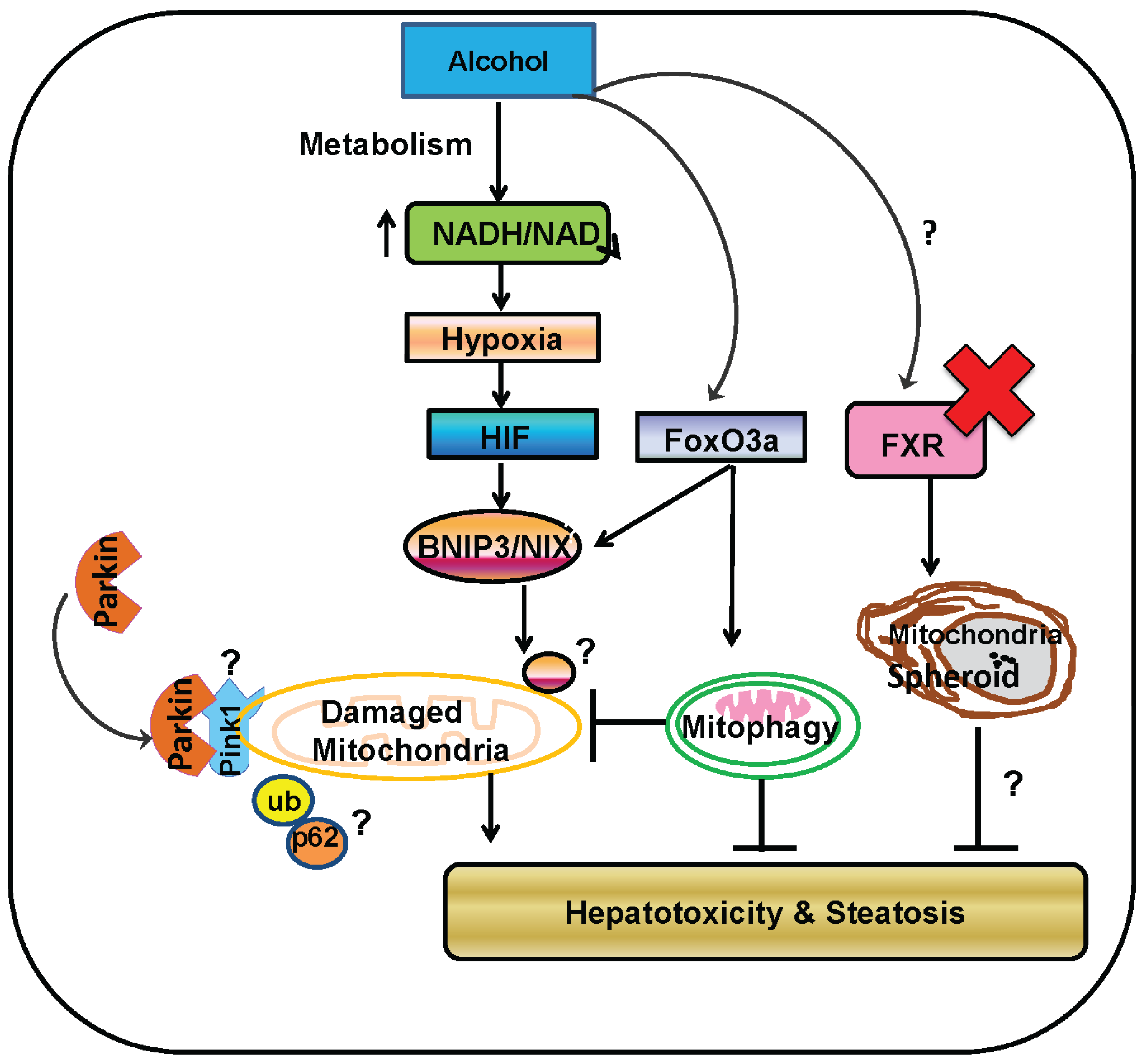 Jessica A Williams drafted this manuscript. Wen-Xing Ding designed the conceptual idea and logical outline for this manuscript and read and made additional changes on the draft.