Stress Responses in Down Syndrome Neurodegeneration: State of the Art and Therapeutic Molecules

Expression and Functional Analysis of the Argonaute Protein of Thermus thermophilus (TtAgo) in E. coli BL21(DE3)

The prokaryotic Argonaute proteins (pAgos) have been reported to cleave or interfere with DNA targets in a guide-dependent or independent manner. It is often difficult to characterize pAgos in vivo due to the extreme environments favored by their hosts. In the present study, we expressed functional Thermus thermophilus pAgo (TtAgo) in E. coli BL21 (DE3) cells at 37 °C. Initial attempts to express TtAgo in BL21(DE3) cells at 37 °C failed. This was not because of TtAgo mediated general toxicity to the host cells, but instead because of TtAgo-induced loss of its expression plasmid. We employed this discovery to establish a screening system for isolating loss-of-function mutants of TtAgo. The E. colifabI gene was used to help select for full-length TtAgo loss of function mutants, as overexpression of fabI renders the cell to be resistant to the triclosan. We isolated and characterized eight mutations in TtAgo that abrogated function. The ability of TtAgo to induce loss of its expression vector in vivo at 37 °C is an unreported function that is mechanistically different from its reported in vitro activity. These results shed light on the mechanisms by which TtAgo functions as a defense against foreign DNA invasion. View Full-Text
Keywords: TtAgo; in vivo; endonucleases; mutagenesis; fabI; triclosan TtAgo; in vivo; endonucleases; mutagenesis; fabI; triclosan
►▼ Show Figures 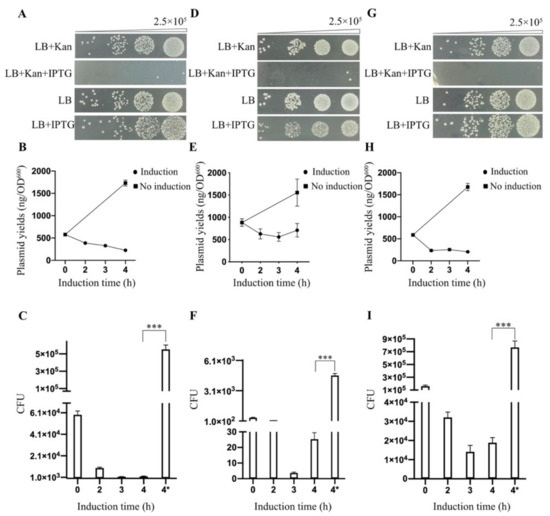