Thermosonication for the Production of Sulforaphane Rich Broccoli Ingredients

Irisin is an exercise-induced myokine, suggested to exert beneficial effects on metabolism. However, the studies on the regulation of irisin secretion and the expression of its precursor FNDC5 have shown conflicting data. The discrepancies among previous correlation studies in humans are related to the heterogeneity of the study population. The fact that irisin is not only a myokine but also an adipokine leads to the further complexity of the role of irisin in metabolic regulation. In this study, we examined the regulation of FNDC5 expression and irisin in circulation in both type 1 and type 2 diabetic mice, and their potential relationships with metabolic parameters. In streptozotocin (STZ)-induced type 1 diabetic mice, high-fat diet (HFD)-induced obese mice and db/db mice, the circulating irisin as well as FNDC5 gene expression in subcutaneous fat was downregulated. Muscle FNDC5 expression was only significantly lower in STZ mice, and epididymal fat FNDC5 expression was unaltered. It is interesting to note that plasma irisin levels correlated positively with subcutaneous fat FNDC5 expression, but not epididymal fat or muscle. Moreover, both irisin levels and subcutaneous fat FNDC5 correlated negatively with markers of insulin resistance. These results suggest a regulatory role for subcutaneous fat-derived FNDC5/irisin in metabolic disease.
Keywords: irisin; FNDC5; diabetes; metabolism; muscle; adipose tissue irisin; FNDC5; diabetes; metabolism; muscle; adipose tissue

Irisin is a myokine, identified as a proteolytic cleavage product of fibronectin type III domain-containing protein 5 (FNDC5), a transmembrane protein expressed mainly in skeletal muscle [1]. Irisin is known to be dependent on proliferator-activated receptor gamma coactivator 1-alpha (PGC1α), a major mediator of the effect of exercise in muscle [2]. In the original report by Bostrom et al., PGC1α overexpression led to the increased expression of FNDC5, which is then secreted as irisin into circulation by exercise [1]. The discovery of irisin has highlighted the vital role of crosstalk between muscle and other tissues, such as adipose tissue, liver, and bone, in the regulation of metabolism [3]. It has been proposed that irisin mediates the beneficial effects of exercise on metabolism by upregulation of uncoupling protein 1 (UCP1) expression and the subsequent elevation of energy expenditure, resulting in the amelioration of obesity-induced insulin resistance [4,5]. Since the first report in 2012, the therapeutic effects of irisin on metabolism have been evaluated in many reports, most of which were interventional animal studies. In high-fat diet (HFD)-induced diabetic mice, irisin treatment reduced epididymal fat mass and improved glucose tolerance as well as lipid profiles in serum, compared to control mice [6]. In another study, FNDC5/irisin ameliorated glucose and lipid metabolism by enhancing lipolysis via the cAMP-PKA-HSL/perilipin pathway and suppressing adipogenesis via the activation of Wnt signaling [7,8]. Furthermore, the subcutaneous perfusion of irisin improved insulin sensitivity in the liver [9], a finding which was further confirmed by the same investigators using FNDC5 knockout mice. In those animals, FNDC5 deficiency aggravated HFD-induced hepatic lipid accumulation, while FNDC5 overexpression alleviated hepatosteatosis through AMPK/mTOR-mediated autophagy restoration [10]. It is interesting to note that the anti-diabetic activity of irisin was also reported in insulin-deficient type 1 diabetic mice. Duan et al. observed that recombinant irisin treatment in streptozotocin (STZ)-induced diabetic mice significantly lowered blood glucose levels, partly by improving the expression of metabolic genes in the skeletal muscle and adipose tissue [11]. Taken together, these data indicate that irisin is a promising therapeutic candidate for the prevention and treatment of both type 1 and type 2 diabetes.
In contrast to the growing evidence with respect to the therapeutic potential of irisin, studies on the regulation of irisin and its putative role in metabolic diseases in humans have shown conflicting data. Controversy exists primarily with regard to the association between circulating irisin and body mass index (BMI). Whereas some studies have shown that irisin is positively correlated with BMI [12,13,14,15,16], others have reported the opposite relationship [17,18]. Similar divergent results have been reported for the correlation between circulating irisin and insulin resistance [19]. Although most studies agree that circulating irisin is positively correlated with insulin resistance, no consensus opinion exists regarding the association of irisin and metabolic syndrome [15,16,20,21,22,23,24,25,26,27,28]. Those who observed that a reduction in irisin is associated with an increased risk of hyperglycemia or metabolic syndrome suggest the protective role of irisin against insulin resistance, similar to the relationship observed with adiponectin in metabolic diseases. Conversely, those that have shown increased irisin levels in metabolic syndrome point to the compensatory role of irisin or even irisin-resistance, a phenomenon that resembles insulin. Relatively consistent results were observed in populations with type 2 diabetes (T2DM). In most clinical studies, including meta-analyses, lower levels of irisin in patients with T2DM compared to controls have been reported [19,24,29]. However, data regarding irisin in patients with type 1 diabetes (T1DM) are lacking.
The complexity of irisin’s role in metabolic regulation also derives from the fact that irisin is not only a myokine but also an adipokine. Muscle is known to be a dominant organ for the expression and secretion of irisin, but we and others have shown that adipocytes are also responsible for the expression of FNDC5 and the secretion of irisin [8,17,30]. In healthy individuals, most of the irisin in circulation derives from muscle cells, which is induced in response to exercise [30]. However, studies have suggested that although lower in relative expression compared to muscle, adipose tissue FNDC5 expression significantly correlates with the circulating irisin levels, especially in metabolically dysregulated states, which further supports the hypothesis that irisin may play a compensatory role as an adipokine secreted in response to altered metabolic state [17]. However, the discordance of the data on the direction of correlation makes it difficult to draw firm conclusions [30,31,32,33,34]. The contrasting role of distinct adipose tissue depots [35], including subcutaneous and visceral fat, in metabolism could also be implicated in the inconsistent findings.
The discrepancies among previous results from human subjects are related to confounding variables such as age, sex, race, and physical status. The fact that most patients with metabolic disease are under pharmacotherapy further contributes to the heterogeneity of the study population. In addition, the conflicting results in patients with metabolic syndrome may be associated with differences in the severity or duration of insulin resistance. Therefore, a well-controlled study is needed to verify the relationship between irisin secretion, FNDC5 expression, and diabetes. In this study, we have explored the regulation of FNDC5 expression and plasma irisin concentration in three different diabetic models: (i) STZ-induced type 1 diabetic mice, (ii) HFD-induced type 2 diabetic mice, and (iii) genetically obese db/db mice. In each group, the circulating irisin levels and tissue expression of FNDC5 in skeletal muscle, epididymal fat and subcutaneous fat were measured. The potential relationships between plasma irisin, the tissue expression of FNDC5, and metabolic parameters, such as insulin sensitivity, were investigated to gain a better understanding of the role of irisin in the pathophysiology of metabolic disease.

Experimental diabetes was induced in six-week-old mice by intraperitoneal injection of 50 mg/kg STZ for 5 days [36]. STZ was dissolved in 0.1 M sodium citrate buffer solution and kept on ice until ready for injection (pH 4.5). Age-matched controls were administered with an equivalent volume of vehicle (n = 11 for each group). All mice were euthanized at 12 weeks post-STZ or vehicle injection.

After collecting blood, the mice were perfused with 1× PBS (pH 7.4). Subcutaneous fat, epididymal fat, brown fat, kidney, and muscle were harvested and kept on cold PBS, and then the weight was measured. All tissues were stored at −80 °C until further analysis.

SPSS was used for the statistical analyses. Differences between groups were compared by ANOVA with subsequent Fisher’s significant difference method. The associations of circulating irisin levels and FNDC5 expression in muscle and fat with various parameters were calculated with Pearson’s correlation coefficients. Data are presented as mean ± SEM with p value of < 0.05 as the criterion for a statistically significant difference.

The study was conducted according to the guidelines of the Declaration of Helsinki, and approved by the Institutional Animal Care and Use Committee (IACUC) of Ewha Womans University (No. 14-051 for STZ mice, No. 15-062 for HFD mice, No. 14-110 for db/db mice)

The data presented in this study are available in the figures and tables of this manuscript.

We are grateful to Ahreum Cho and Guideock Kwon for their technical support on animal experiments. 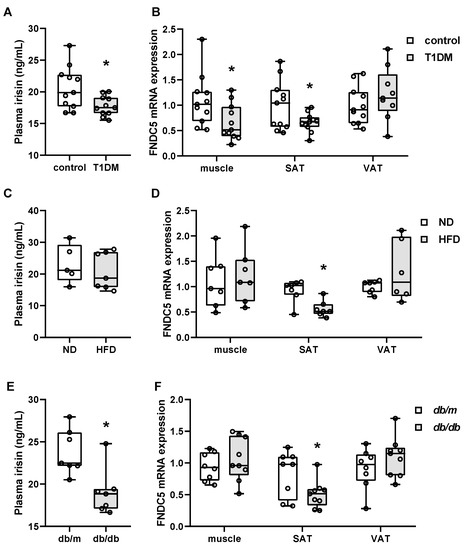