Inflammation in Obesity-Related Complications in Children: The Protective Effect of Diet and Its Potential Role as a Therapeutic Agent
Previous Article in Journal

MicroRNAs (miRNAs/miRs) such as miR-1, miR-133a, miR-133b, miR-135a, and miR-29b play a key role in many cardiac pathological remodeling processes, including apoptosis, fibrosis, and arrhythmias, after a myocardial infarction (MI). Dietary flaxseed has demonstrated a protective effect against an MI. The present study was carried out to test the hypothesis that dietary flaxseed supplementation before and after an MI regulates the expression of above-mentioned miRNAs to produce its cardioprotective effect. Animals were randomized after inducing MI by coronary artery ligation into: (a) sham MI with normal chow, (b) MI with normal chow, and (c–e) MI supplemented with either 10% milled flaxseed, or 4.4% flax oil enriched in alpha-linolenic acid (ALA), or 0.44% flax lignan secoisolariciresinol diglucoside. The feeding protocol consisted of 2 weeks before and 8 weeks after the surgery. Dietary flax oil supplementation selectively upregulated the cardiac expression of miR-133a, miR-135a, and miR-29b. The levels of collagen I expression were reduced in the flax oil group. We conclude that miR-133a, miR-135a, and miR-29b are sensitive to dietary flax oil, likely due to its rich ALA content. The cardioprotective effect of flaxseed in an MI could be due to modulation of these miRNAs.
Keywords: myocardial infarction; microRNA; diet; heart; flaxseed; alpha linolenic acid myocardial infarction; microRNA; diet; heart; flaxseed; alpha linolenic acid

Cardiovascular disease (CVD) is a leading cause of morbidity and mortality, and according to the latest estimates by the Heart Disease and Stroke Statistics—2019 update, approximately 1 of every 3 deaths occur due to CVD. Ischemic heart disease is the major cause of mortality as 43.2% of cardiovascular deaths are attributed to it alone [1]. Ischemia results in acute cardiac damage through myocardial infarction (MI). Insufficient blood flow to the myocardium results in an MI, which, in turn, leads to inflammatory and fibrotic changes in both viable and infarcted myocardium and consequently leads to adverse cardiac remodeling and ventricular dysfunction [2]. Recent advancements in the understanding of molecular mechanisms of heart function have shone a light on the impact of endogenously encoded microRNAs (miRNAs) on cardiovascular health and disease [3]. In contrast to standard pharmacological drugs acting on single targets, miRNAs are capable of modulating several downstream pathways in parallel [4].
miRNAs are endogenous, non-coding, single-stranded RNAs of 22–26 nucleotides that regulate messenger RNA (mRNA) expression through posttranslational inhibition or degradation [5]. Several miRNAs have been shown to be involved in cardiac pathological processes such as acute MI, cardiac arrhythmias, and hypertrophy [6,7,8]. miRNAs can either promote or inhibit apoptosis of cardiomyocytes, they can modulate angiogenesis, alter cardiac regeneration and reprogram cardiac fibroblasts into cardiomyocytes [9]. These effects clearly support a relationship between altered miRNA expression and ischemic heart disease. Recent studies have highlighted the importance of miRNAs in the regulation of cardiac rhythm [9]. miRs such as miR-1, miR-133, miR-29, and miR-135 play important roles in cardiac remodeling and arrhythmias. The present study focused on examination of miR-1, miR-133a/b, miR-135a, and miR-29b due to their involvement in cardiac remodeling processes including inflammation, apoptosis, arrhythmias, and fibrosis. Furthermore, miR-1 and miR-133 are cardiac-specific markers [10] and two of the most abundant miRs in the heart [11]. Increased expression of miR-1 has been associated with arrhythmias after an MI [9]. Upregulation of miR-133 reduces apoptosis of cardiomyocytes [12], decreases the inflammatory response in myocardium after an MI [11], lowers incidences of arrhythmias [13], and improves cardiac reprogramming [14]. miR-29b is considered to be a master regulator of cardiac fibrosis [15,16,17]. Although miR-135a is less widely studied, strong evidence supports its role in arrhythmias and cardiac fibrosis after an MI [18,19].
A recent meta-analysis of 13 randomized controlled trials with a total of 127,477 participants demonstrated a significant reduction in the risk of MI, total CAD, and total CVD through supplementation of the diet with marine omega-3 polyunsaturated fatty acids (n-3 PUFAs) [20]. An alternative source of n-3 PUFAs is being investigated due to limiting physical and physiological concerns regarding n-3 PUFAs obtained from marine sources [21]. Flaxseed is a rich source of ALA, which is a plant-based n-3 PUFAs. In addition to the high content of ALA, flaxseed is also a good source of lipid-lowering dietary fiber and the antioxidant secoisolariciresinol diglucoside (SDG), which is a plant lignan [21]. Dietary flaxseed recently demonstrated several positive effects in a coronary artery ligation induced model of MI in rats. Flaxseed supplementation reduced the incidence of ventricular arrhythmias as well as prevented an excessive increase in infarct size, myocardial fibrosis, inflammation, and left ventricular dilation [22]. However, the mechanism responsible for this cardioprotective effect of flaxseed was unclear. In view of the above discussion of the impact of miRNAs on cardiac performance under pathological challenge, it is possible that dietary flaxseed may alter miRNA expression and, ultimately, affect myocardial adaptive processes. In support of this hypothesis, diet is known to induce significant cardioprotective effects via a direct action on the epigenome [23]. The current investigation was thus performed to test the hypothesis that flaxseed supplementation exerts its cardioprotective effect by modulating the expression of miR-1, miR-133a, miR-133b, miR-135a, and miR-29b, which are involved in the adverse cardiac remodeling process after an MI.

This study protocol (17-005) was approved by the University of Manitoba Office of Research Ethics & Compliance and Animal Care Committee and was done in accordance with the guidelines by the Canadian Council for Animal Care. Male Sprague Dawley rats (100–140 g; Charles River Laboratories, Quebec, Canada) were housed in a temperature and humidity-controlled room with a 12 h light/dark cycle. Animals were randomized into five groups: (a) sham MI fed normal chow, (b) MI fed normal chow, (c) MI fed chow supplemented with 10% milled flaxseed (flax), (d) MI fed chow supplemented with 4.4% flax oil enriched in alpha-linolenic acid (Oil), and (e) MI fed chow supplemented with the flax lignan secoisolariciresinol diglucoside (SDG) (0.44%). These dietary interventions and the concentrations used are similar to those used successfully in previous studies [24]. The amount of ALA present in 10% milled flaxseed is equivalent to the amount in 4.4% flax oil. The amount of SDG present in 10% milled flaxseed is equivalent to the amount in 0.44% flax lignan. The four diets included a Prolab® RMH 3000 rodent regular chow (TestDiet, Richmond, IN, USA), a 10% ground flaxseed (BakePur Milled Golden Flaxseed, Pizzey Ingredients, Russell, MB, Canada) supplemented chow diet, or a 4.4% flax oil (Cold Pressed Flax Oil, Royal Harvest, Shape Foods, Brandon, MB, Canada) supplemented chow diet, or a 0.44% SDG (Archer Daniels Midland, Chicago, IL, USA) supplemented diet.
After receiving respective diets for two weeks, animals underwent either coronary artery ligation (CAL) or sham surgery. Animals were anesthetized with 1–5% isoflurane and oxygen at a flow rate of 2 L min−1 and kept in a surgical plane of anesthesia with 2% isoflurane during surgery. A left thoracotomy was carried out, and the heart was gently exposed from the pericardial sac through the incision. The left anterior descending coronary artery (LAD) was located and occluded with 6-0 polypropylene silk suture at about 2 mm from aortic root. The suture was tied, and the ligation was estimated to be successful when the anterior wall of the left ventricle turned pale. The heart was repositioned, then the chest compressed to remove any air from the cavity and the incision was closed using a purse string suture. Sham-operated animals that served as controls were subjected to similar surgical procedures except that the LAD artery was not ligated. Buprenorphine 0.05 mg kg−1 was administered pre- and post-surgery (2 times a day for 2 days) subcutaneously as an analgesic agent to all animals. Animals were fed their respective diets for two weeks before and for 8 weeks after surgery. Thus, animals were sacrificed after a total of 10 weeks on the study protocol.

All animals were anesthetized with ketamine/xylazine (9.0 mg per 100 g/0.9 mg per 100 g IM). The depth of anesthesia was assessed by a pedal withdrawal reflex. The blood sample was collected from the inferior vena cava by opening the thoracic cavity and the heart was immediately excised. The whole heart was rinsed in phosphate buffered saline (PBS), and the left ventricular (LV), septum, and fibrotic scar tissues were separated, weighed, and flash-frozen in liquid nitrogen.

The macronutrient composition of the experimental diets has been reported previously [22]. The fatty acid profile of the diets is presented in Table 1. Notable differences were observed in the levels of saturated and monounsaturated fatty acids. As shown in Figure 1, due to the supplementation of the diets with flaxseed and flax oil, a significant increase of 14-fold and 15-fold, respectively, was observed in the levels of ALA (C18:3n3) as compared to the control diet. Similarly, total n-3 fatty acid levels were also significantly higher in the flaxseed supplemented diets when compared with the control diet, Figure 1. Consequently, the ratios of n-6 to n-3 fatty acid levels were significantly lowered in the flaxseed and the flax oil supplemented diets compared to the control diet, Figure 1. This increase in the levels of ALA, total n-3 fatty acid, and the ratios of n-6 to n-3 in the diet corresponds with an increase in the plasma levels of the same parameters observed in our previous study [22].

3.2. The Effect of Dietary Flaxseed and Its Components on the Expression of Collagen I

A western blot analysis was performed to evaluate the expression levels of collagen protein. A significant >2-fold increase in the levels of collagen type I and alpha 1 (Col 1α1) protein was found in the untreated MI group compared to the sham control (Figure 2). Dietary supplementation with flax, flax oil, and SDG decreased the protein levels of Col 1α1 by 2.36, 2.69, and 2.13-fold, respectively, compared to the untreated MI group as shown in Figure 2.

3.3. The Expression of miR-133a Is Sensitive to the Flax Oil Treatment

Dietary flaxseed supplementation was reported in our previous study to reduce myocardial infarct size and decrease the incidence of arrhythmias after an MI [22]. Downregulation of miR-133 expression after an MI is related to the death of cardiomyocytes as well as the development of ventricular fibrillation. In this study, the expression of miR-133a and miR-133b was analyzed in the postinfarct cardiac tissue after 8 weeks of CAL surgery. No significant differences in the expression patterns of both the isoforms of miR-133 were observed in the untreated MI group when compared to the sham control (Figure 3). However, flax oil treatment significantly upregulated the expression of miR-133a compared to the control tissue. Interestingly, miR-133b expression was not sensitive to the flax oil treatment.

3.4. Upregulation of miR-135a and -29b by the Flax Oil Supplementation

3.5. The Effect of Dietary Flaxseed and Its Components on the Expression of NCX

In summary, this study has provided the first evidence that miR-133a, miR-135a, and miR-29b are sensitive to dietary flaxseed oil and associated with significant cardioprotection in a model of MI (Figure 6). These findings reflect a selective change in miRNA expression since miR-1 and miR-133b were unaffected during the course of this investigation. The present study also suggests the cardioprotective effect of flaxseed in the setting of an acute MI is likely mediated, at least in part, via its ALA content (Figure 5). These data complement previous studies on hypertension and atherosclerosis that have also attributed the health benefits of dietary flaxseed to its content of ALA [24,51,52,53]. Overall, the experimental evidence generated in this study suggests that dietary flaxseed can modulate the expression of certain miRs involved in adverse cardiac remodeling to produce a favorable effect in an MI.
APAF1, apoptotic protease activating factor 1; Bcl-2, B-cell lymphoma 2; BMF, Bcl-2 modifying factor; Col1A1, collagen, type 1, alpha 1; CTGF, connective tissue growth factor; DAPK2, death-associated protein kinase 2; EMT, endothelial-mesenchymal transition; HCN2, potassium/sodium hyperpolarization-activated cyclic nucleotide-gated ion channel 2; NCX1, sodium calcium exchanger; PTP1B, protein tyrosine phosphatase 1B; TRPM7, transient receptor potential ion channel subfamily M, member 7; TXNIP, Thioredoxin-interacting protein. 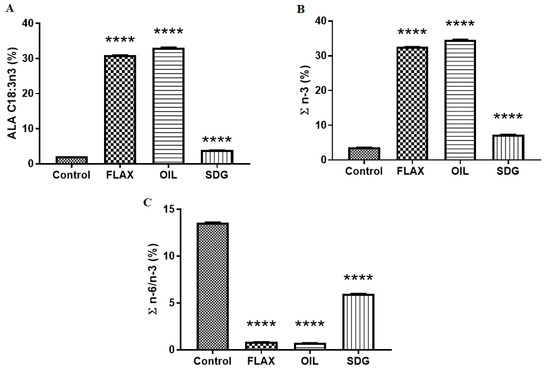 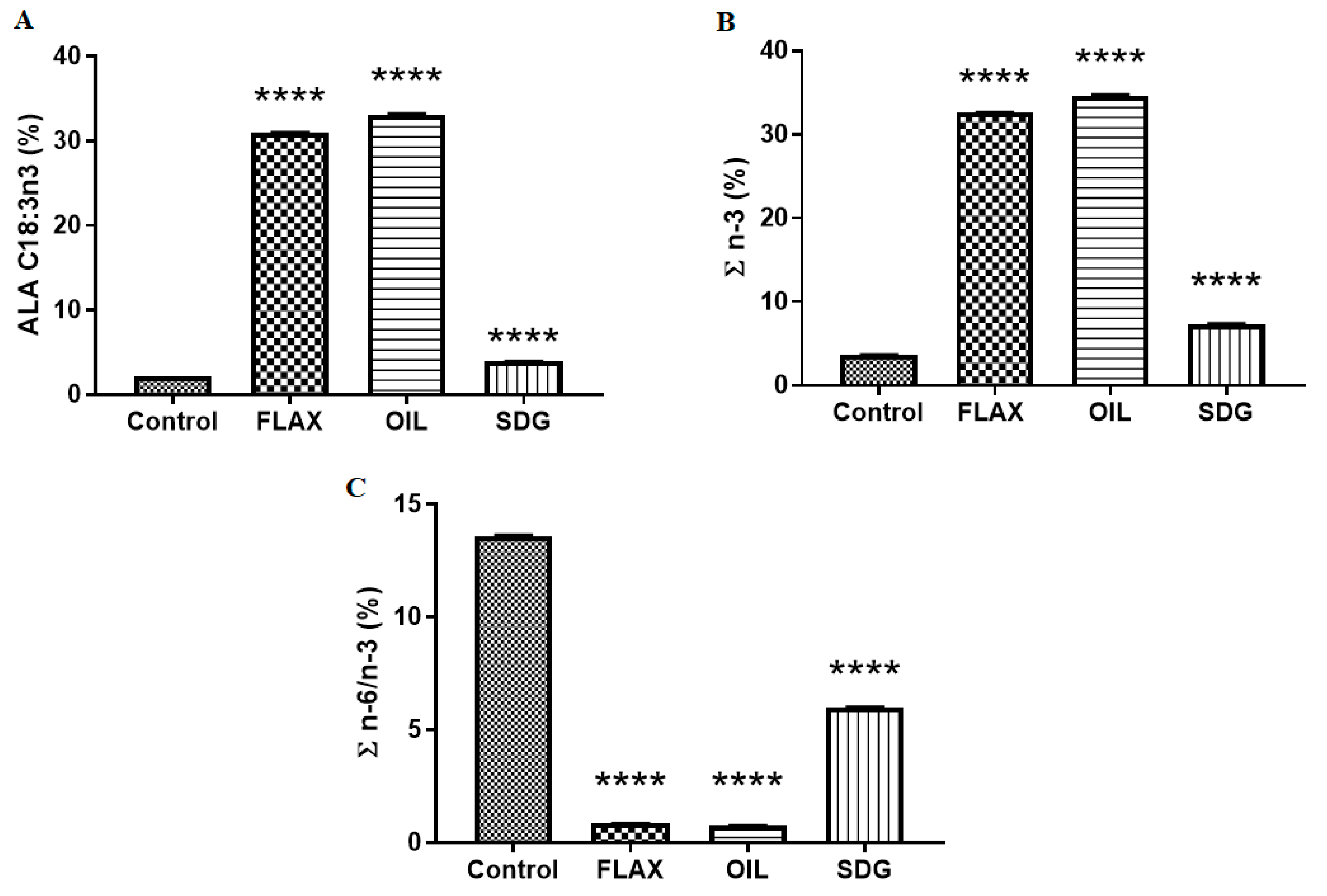 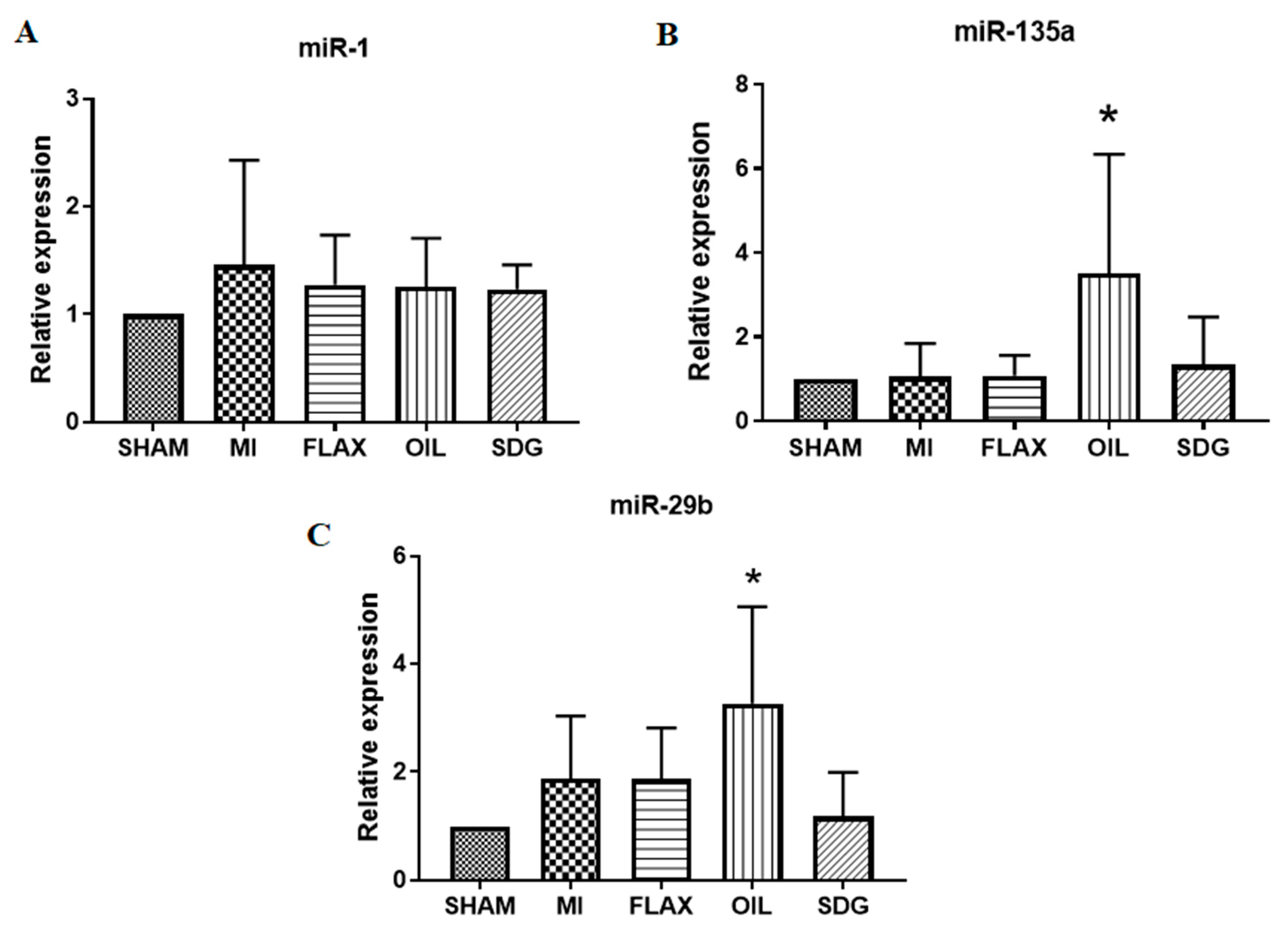