Oxysterol binding related proteins 5 and 8 (ORP5 and ORP8) are two close homologs of the larger oxysterol binding protein (OSBP) family of sterol sensors and lipid transfer proteins (LTP). Early studies indicated these transmembrane proteins, anchored to the endoplasmic reticulum (ER), bound and sensed cholesterol and oxysterols. They were identified as important for diverse cellular functions including sterol homeostasis, vesicular trafficking, proliferation and migration. In addition, they were implicated in lipid-related diseases such as atherosclerosis and diabetes, but also cancer, although their mechanisms of action remained poorly understood. Then, alongside the increasing recognition that membrane contact sites (MCS) serve as hubs for non-vesicular lipid transfer, added to their structural similarity to other LTPs, came discoveries showing that ORP5 and 8 were in fact phospholipid transfer proteins that rather sense and exchange phosphatidylserine (PS) for phosphoinositides, including phosphatidylinositol-4-phosphate (PI(4)P) and potentially phosphatidylinositol-(4,5)-bisphosphate (PI(4,5)P2). Evidence now points to their action at MCS between the ER and various organelles including the plasma membrane, lysosomes, mitochondria, and lipid droplets. Dissecting exactly how this unexpected phospholipid transfer function connects with sterol regulation in health or disease remains a challenge for future studies. View Full-Text
Keywords: oxysterol binding protein like 5 and 8; OSBPL5; OSBPL8; PtdIns; PtdIns4P; PtdIns(4,5)P2; cortical endoplasmic reticulum oxysterol binding protein like 5 and 8; OSBPL5; OSBPL8; PtdIns; PtdIns4P; PtdIns(4,5)P2; cortical endoplasmic reticulum
►▼ Show Figures 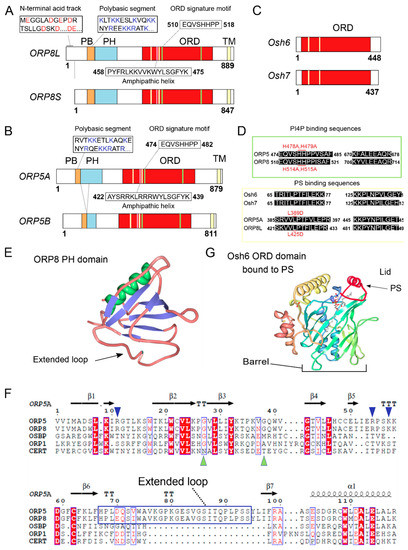