Biological Effects of Glucosinolate Degradation Products from Horseradish: A Horse that Wins the Race

Horseradish degradation products, mainly isothiocyanates (ITC) and nitriles, along with their precursors glucosinolates, were characterized by GC-MS and UHPLC-MS/MS, respectively. Volatiles from horseradish leaves and roots were isolated using microwave assisted-distillation (MAD), microwave hydrodiffusion and gravity (MHG) and hydrodistillation (HD). Allyl ITC was predominant in the leaves regardless of the isolation method while MAD, MHG, and HD of the roots resulted in different yields of allyl ITC, 2-phenylethyl ITC, and their nitriles. The antimicrobial potential of roots volatiles and their main compounds was assessed against sixteen emerging food spoilage and opportunistic pathogens. The MHG isolate was the most active, inhibiting bacteria at minimal inhibitory concentrations (MICs) from only 3.75 to 30 µg/mL, and fungi at MIC50 between <0.12 and 0.47 µg/mL. Cytotoxic activity of volatile isolates and their main compounds were tested against two human cancer cell lines using MTT assay after 72 h. The roots volatiles showed best cytotoxic activity (HD; IC50 = 2.62 μg/mL) against human lung A549 and human bladder T24 cancer cell lines (HD; IC50 = 0.57 μg/mL). Generally, 2-phenylethyl ITC, which was tested for its antimicrobial and cytotoxic activities along with two other major components allyl ITC and 3-phenylpropanenitrile, showed the best biological activities. View Full-Text
Keywords: horseradish; glucosinolates; isothiocyanates; microwave-assisted isolation; antimicrobial activity; cytotoxic activity horseradish; glucosinolates; isothiocyanates; microwave-assisted isolation; antimicrobial activity; cytotoxic activity
►▼ Show Figures 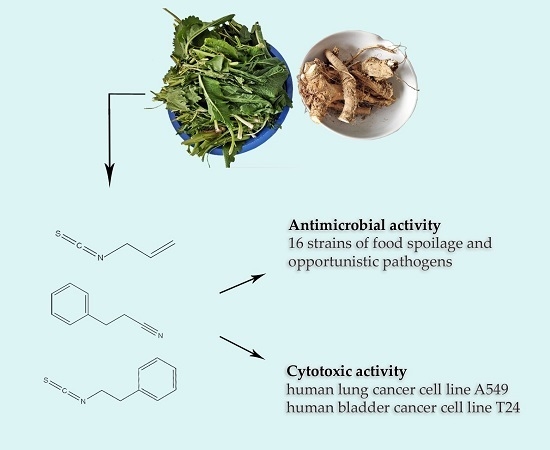