Eosinophilic chronic rhinosinusitis (ECRS), a subgroup of chronic rhinosinusitis with nasal polyps is characterized by ethmoid-predominant sinusitis with eosinophilic inflammation [1,2]. ECRS is a refractory eosinophilic airway disease because ECRS patients have a much higher incidence (about 50%) of bronchial asthma [3]. In general, conventional ECRS treatments, including intranasal corticosteroids and oral corticosteroids, do not control the disease adequately. Recently, we reported the usefulness of inhaled corticosteroid (ICS) exhalation through the nose (ETN) treatment for ECRS patients with bronchial asthma [4,5,6]. ICS-ETN treatment reduces operative interventions by half [6] and reduces recurrence rates within three years, after endoscopic sinus surgery (ESS), by half in patients with severe ECRS (unpublished data, in preparation). However, about 30% of these patients experienced recurrence even after ESS. Bronchial asthma is a known risk factor of relapse after ESS [7], suggesting that severe ECRS with asthma is much more difficult to control because of reduced corticosteroid sensitivity [8].
Nuclear translocation of the glucocorticoid receptor (GR) is a critical process that mediates corticosteroids’ biological actions [9]. In patients with refractory airway inflammation, including severe asthma, the reduced nuclear translocation of GR is an important molecular mechanisms of corticosteroid resistance. GR-Ser226 phosphorylation induces this resistance due to the reduced activity and expression of phosphatases, such as protein phosphatase 2A (PP2A) [10,11,12]. Interestingly, a recent report has shown that PP2A expression is lower in nasal polyps from ECRS patients compared with controls [13]. In addition, there are reports of reduced corticosteroid responses in nasal polyp epithelial cells from patients with refractory chronic rhinosinusitis [8]. However, the local response to corticosteroids in patients with ECRS and the underlying mechanisms have not been elucidated fully.
In this study, we focused on corticosteroid sensitivity in nasal bronchial cells from patients with ECRS and investigated the molecular mechanisms of steroid resistance.

Tissue specimens were obtained from nasal polyps in the ethmoid sinuses of patients with ECRS and uncinate process tissues of patients with allergic rhinitis or ECRS during surgery. Nasal epithelial cells were collected from healthy volunteers and patients with allergic rhinitis, ECRS, or chronic rhinosinusitis (non-ECRS), by brushing the inferior turbinate (middle meatus side) with a cervical cytology brush. The desquamated epithelium from the tissue samples and nasal epithelial cells was incubated until EpCAM (Millipore, Temecula, CA, USA) confirmed a monolayer of epithelial-like cells. The human bronchial epithelial cell line BEAS-2B was obtained from the European Collection of Authenticated Cell Culture (Salisbury, UK). Eosinophils (purity > 98%) were isolated from the peripheral blood of healthy volunteers with mild eosinophilia (approximately 4%–8% of total white blood cells) by negative selection using a MACS system in conjunction with the Eosinophil Isolation Kit (Miltenyi Biotec, Bergisch Gladbach, Germany). Table S1 shows the characteristics of subjects. This study was approved by the local ethics committee of Kansai Medical University (approval number: KanIRin1313), and written informed consent was obtained from each patient or volunteer.

Comparisons of two groups of data were performed using Mann-Whitney U test or paired t-test. Correlation coefficients were calculated with the use of Spearman’s rank method. Other data were analyzed by ANOVA with post hoc test adjusted for multiple comparisons (Dunn’s test or Newman-Keuls test), as appropriate. Differences were considered statistically significant if p value was <0.05. Descriptive statistics were expressed as means ± SEM.

3.1. Local Responses to Corticosteroid are Reduced in ECRS Patients with Asthma

We further evaluated PP2A’s involvement in GR nuclear translocation during eosinophilic inflammation. When BEAS-2B airway bronchial cells were stimulated with eosinophil peroxidase (EPX), an eosinophil granule protein, PP2A became phosphorylated in a dose-dependent manner (Figure 2A). In addition, PP2A protein expression was slightly, but significantly, reduced (Figure 2B), concomitant with a 20% reduction in PP2A activity (Figure 2C). This reduction in PP2A activity was likely accounted for in terms of the degradation of PP2A by its phosphorylation, as we have shown previously [11]. Since PP2A was detected in GR-immunoprecipitates obtained from BEAS-2B cell extracts (Figure 2D), PP2A may be associated with GR function in the same complex [10]. Finally, we revealed that reduced PP2A by siRNA impaired GR’s ability to translocate to the nucleus (Figure 2E), suggesting that activated eosinophils could reduce PP2A and the response to corticosteroids at local inflammatory sites.

3.3. Eosinophilic Inflammatory Mediators are Increased in the Epithelial Cells of Nasal Polyps

When corticosteroids work properly, they suppress a number of inflammatory genes [14]. Thus, we focused on mRNA levels of inflammatory mediators associated with eosinophilic airway inflammation at local sites as regulators of corticosteroid action. In epithelial cells of nasal polyps (eosinophil-rich areas), TSLP, IL-25, and IL-33 were higher than in those of uncinate process tissues (eosinophil-poor areas) (Figure 3A). The eosinophilic chemo-attractants CCL4, CCL5, CCL11, and CCL26 were increased in nasal polyps compared with uncinate process tissues (Figure 3B). These results indicated that, in eosinophil-rich areas, corticosteroid action was impaired concomitant with reduced PP2A (Figure 3C).

In this study, we demonstrated reduced local responses to corticosteroids in ECRS patients with bronchial asthma, particularly at eosinophilic inflammatory sites (eosinophil-rich areas). Impaired PP2A in these areas resulted in reduced GR nuclear translocation and corticosteroid insensitivity. In addition, epithelial cells in these areas enhanced the production of ILC2-stimulating cytokines, which served to induce type 2 allergic responses [15] and the expression of several chemokines involved in eosinophilic inflammation [16,17,18,19]. Among these chemokines, CCL4 was found to be markedly elevated. CCL4 is also released, not only from macrophages and mononuclear cells, but also activated eosinophils [16]. Since CCR5, a specific receptor for CCL4 [20], is expressed on eosinophils, T cells, and ILC2 [21], these cells could be further recruited in eosinophil-rich areas and cooperatively enhance type 2 allergic responses.
We recently showed that eosinophils are activated in eosinophil-rich nasal polyps compared with peripheral blood eosinophils in the same patients [22]. Several granule proteins, such as EPX and EDN, degranulate from activated eosinophils [23]. In addition, our results demonstrated that PP2A phosphorylation levels were elevated in epithelial cells after EPX stimulation (Figure 2A) but not in those under co-incubation with non-activated eosinophils (Figure S1). The PP2A catalytic subunit, a regulator of PP2A complexes and activity [24], is phosphorylated at the Tyr307 residue [25], which reduces PP2A activity [26]. Thus, at local sites where eosinophils are activated, impaired PP2A may induce corticosteroid insensitivity. As one of the mechanisms for PP2A hyperphosphorylation in eosinophilic airway inflammation, we confirmed that PTP-RR, a regulator of PP2A-Tyr307 phosphorylation [11], was reduced under stimulation with EPX and in nasal epithelial cells from ECRS patients with severe asthma (Figure S2). Furthermore, PTP-RR expression in nasal epithelial cells was positively correlated with PP2A expression, suggesting that PTP-RR may regulate PP2A-dependant local responses to corticosteroids.
Regarding the therapeutic targets of local corticosteroid insensitivity, restoration of PP2A function may be a candidate. Increased PP2A expression with plasmids, or LABA’s activation of PP2A, may enhance responses to corticosteroids, as we have previously shown in mononuclear cells [10,27]. In same cases of refractory eosinophilic airway inflammation, increased drug delivery to the local inflammatory site with a novel method using inhaled ICS/LABA ETN has been shown to be effective [5]. Our findings are supported by recent reports showing that LABA ameliorates eosinophilic inflammation via PP2A activation [28,29].
Milara et al. reported that responses to corticosteroids were reduced concomitant with the downregulation of the mucin 1protein in nasal polyp epithelial cells from patients with refractory chronic rhinosinusitis [8]. Mucin 1 may contribute to corticosteroid-induced MAP kinase phosphatase 1 (MKP1) upregulation [8], inhibiting MAPK activity and GR-Ser226 phosphorylation, which is associated with reduced GR nuclear translocation [10]. Although the interaction between mucin 1 and PP2A has not been elucidated, we confirmed mucin 1 and PP2A are located in the same complex from GR-immunoprecipitates (Figure S3). Further study is warranted to investigate mucin 1’s role in the PP2A-dependent regulation of corticosteroid sensitivity.

In this study, we evaluated one of the molecular mechanisms of reduced local response to corticosteroids in ECRS with asthma and showed PP2A may present a promising therapeutic target. Our findings contribute to the management of refractory eosinophilic airway inflammation.

This work was supported by Grants-in-Aid for Young Scientists [26860377] and Grants-in-Aid for Scientific Research [16K08951, 19K07949] from Ministry of Education, Culture, Sports, Science and Technology of Japan.

This work was supported in part by the fund of academic society for research in Otolaryngology, Kansai Medical University and the branding program as a world-leading research university on intractable immune and allergic diseases. The authors would like to thank Enago (www.enago.jp) for the English language review. 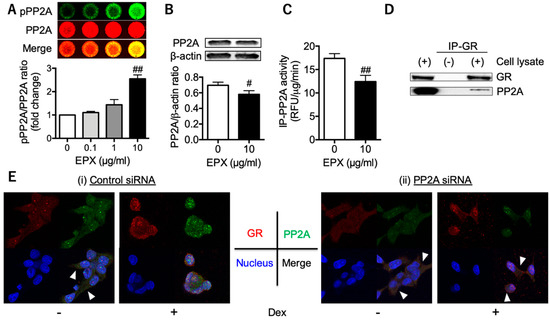 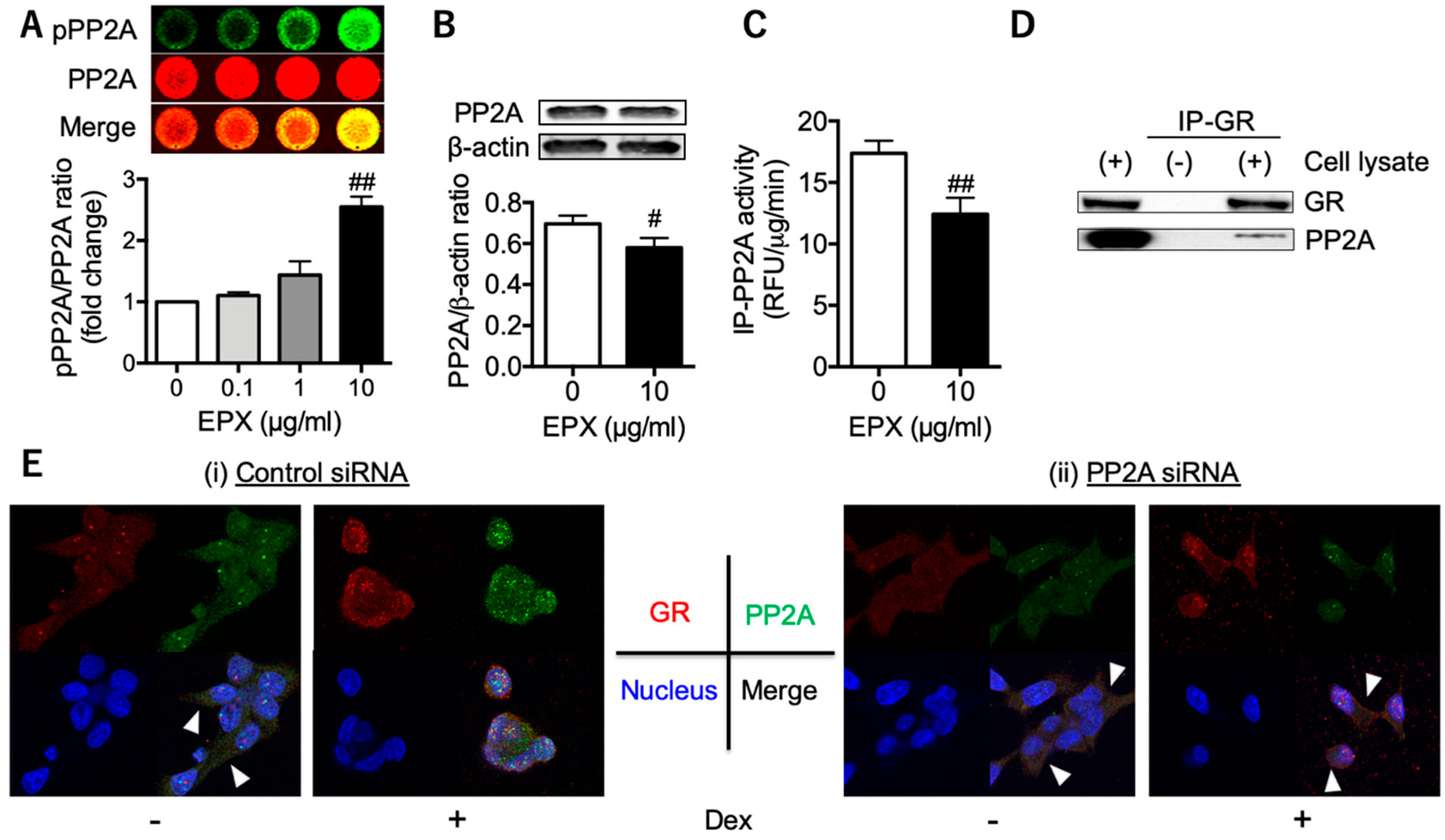