Role of Serum and Urine Biomarkers (PLA2R and THSD7A) in Diagnosis, Monitoring and Prognostication of Primary Membranous Glomerulonephritis
Next Article in Special Issue

Glioblastoma (GBM) is a fast-growing type of malignant primary brain tumor. To explore the mechanisms in GBM, complex biological networks are used to reveal crucial changes among different biological states, which reflect on the development of living organisms. It is critical to discover the kernel differential subgraph (KDS) that leads to drastic changes. However, identifying the KDS is similar to the Steiner Tree problem that is an NP-hard problem. In this paper, we developed a criterion to explore the KDS (CKDS), which considered the connectivity and scale of KDS, the topological difference of nodes and function relevance between genes in the KDS. The CKDS algorithm was applied to simulated datasets and three single-cell RNA sequencing (scRNA-seq) datasets including GBM, fetal human cortical neurons (FHCN) and neural differentiation. Then we performed the network topology and functional enrichment analyses on the extracted KDSs. Compared with the state-of-art methods, the CKDS algorithm outperformed on simulated datasets to discover the KDSs. In the GBM and FHCN, seventeen genes (one biomarker, nine regulatory genes, one driver genes, six therapeutic targets) and KEGG pathways in KDSs were strongly supported by literature mining that they were highly interrelated with GBM. Moreover, focused on GBM, there were fifteen genes (including ten regulatory genes, three driver genes, one biomarkers, one therapeutic target) and KEGG pathways found in the KDS of neural differentiation process from activated neural stem cells (aNSC) to neural progenitor cells (NPC), while few genes and no pathway were found in the period from NPC to astrocytes (Ast). These experiments indicated that the process from aNSC to NPC is a key differentiation period affecting the development of GBM. Therefore, the CKDS algorithm provides a unique perspective in identifying cell-type-specific genes and KDSs. View Full-Text
Keywords: glioblastoma; kernel differential subgraph; complex networks; single-cell; scRNA-seq glioblastoma; kernel differential subgraph; complex networks; single-cell; scRNA-seq
►▼ Show Figures 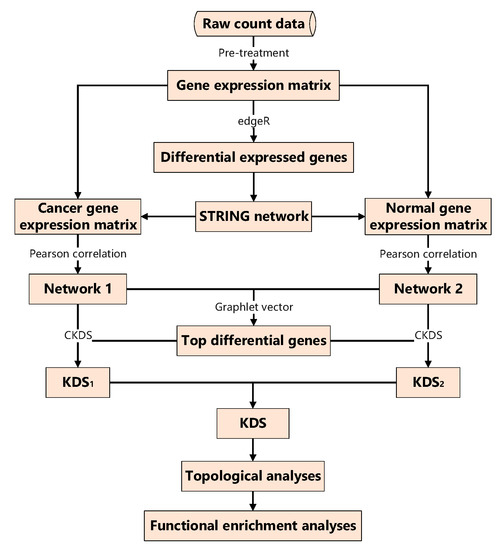