The c.*52 A/G and c.*773 A/G Genetic Variants in the UTR′3 of the LDLR Gene Are Associated with the Risk of Acute Coronary Syndrome and Lower Plasma HDL-Cholesterol Concentration
Previous Article in Special Issue

Multiple myeloma (MM) is a B-cell malignancy that is incurable for a majority of patients. B-cell maturation antigen (BCMA) is a lineage-restricted differentiation protein highly expressed in multiple myeloma cells but not in other normal tissues except normal plasma B cells. Due to the restricted expression and being a cell surface membrane protein, BCMA is an ideal target for immunotherapy approaches in MM. Recombinant immunotoxins (RITs) are a novel class of protein therapeutics that are composed of the Fv or Fab portion of an antibody fused to a cytotoxic agent. RITs were produced by expressing plasmids encoding the components of the anti-BCMA RITs in E. coli followed by inclusion body preparation, solubilization, renaturation, and purification by column chromatography. The cytotoxic activity of RITs was tested in vitro by WST-8 assays using BCMA expressing cell lines and on cells isolated from MM patients. The in vivo efficacy of RITs was tested in a xenograft mouse model using BCMA expressing multiple myeloma cell lines. Anti-BCMA recombinant immunotoxins are very effective in killing myeloma cell lines and cells isolated from myeloma patients expressing BCMA. Two mouse models of myeloma showed that the anti-BCMA immunotoxins can produce a long-term complete response and warrant further preclinical development. View Full-Text
Keywords: mAb BM306; LMB-70; ABD fusion protein; H929 cells mAb BM306; LMB-70; ABD fusion protein; H929 cells
►▼ Show Figures 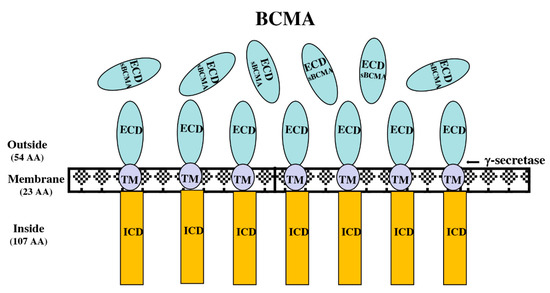