There is increasing proof that polycystic ovary syndrome (PCOS) is associated with the increased frequency of thyroid disturbances. Chamomile (Matricaria chamomilla L.) herb and metformin showed therapeutic efficacy against polycystic ovary syndrome (PCOS). This study aimed to investigate the possible therapeutic effect of both chamomile flower extract and metformin against thyroid damage associated with PCOS in rats. The PCOS model was developed in rats by injecting estradiol valerate, and it was confirmed to be associated with thyroid hypofunction biochemically and pathologically. Treatment of PCOS rats with both chamomile extract and metformin resulted in an improvement in serum level of thyroid hormones (TSH, p < 0.01; T3 and T4, p < 0.05) and the disappearance of most thyroid gland pathological changes demonstrated by light and electron microscopes. They also reduced the level of serum estrogen (p < 0.01). Both chamomile extract and metformin decreased MDA (p < 0.05) and increased GPx and CAT (p < 0.01). Only chamomile extract increased GSH (p < 0.01). Both treatments reduced the apoptotic death of thyroid cells as noted by the reduction of caspase-3 immunoexpression (p < 0.01). In conclusion, both Matricaria chamomilla extract and metformin ameliorated hypothyroidism associated with PCOS through an antioxidant and antiapoptotic mechanism.
Keywords: Matricaria chamomilla; PCOS; hypothyroidism; oxidative stress; apoptosis; estrogen; histopathology Matricaria chamomilla; PCOS; hypothyroidism; oxidative stress; apoptosis; estrogen; histopathology

Subclinical hypothyroidism (SCH), which may be interpreted as an increased thyroid-stimulating hormone (TSH) level together with normal thyroxine (T4) level and absence of obvious symptoms of hypothyroidism is often more prevalent than overt hypothyroidism [1]. Despite the fact that SCH is a mild type of hypothyroidism, it often results in anovulatory cycles, imbalances in sex hormones, subfertility, and detrimental pregnancy outcomes [2,3,4]. Moreover, females with SCH face an increase in the metabolic danger of obesity, insulin resistance, and hyperlipidemia [5,6].
Polycystic ovarian syndrome (PCOS) is among the most prevalent endocrine diseases as it affects 15% to 20% of ladies at reproductive age. The syndrome is characterized mainly by anovulation and hyperandrogenism [7]. Ladies with the PCOS are at high risk of developing a variety of metabolic syndrome and endocrinological disorders, including obesity, resistance to insulin, subfertility, and miscarriage [8,9]. Furthermore, there is growing evidence to indicate that PCOS is related to the increased incidence of thyroid disorders, including nodular goiter and autoimmune thyroiditis [10].
Assuming that women with PCOS and SCH share nearly the same features, it can be deduced that the occurrence of PCOS may be correlated with SCH’s initiation and progress [9]. Our research group recently reported an experimental model of estradiol valerate-induced PCOS in female Wistar rats that is accompanied by thyroid gland dysfunction [11]. Estradiol valerate is a long-acting estrogen used for anovulatory PCOS induction. This agent interferes with the excretion of hypothalamic gonadotropin releasing hormone, consequently, it impedes both luteinizing hormone (LH) secretion and storage [12]. The physiology and histology of the ovary in estradiol induced PCOS model are like those of the human ovary [13].
Chamomile (Matricaria chamomilla L.) is one of the most common medicinal plants in Southern and Eastern Europe. Worldwide, Matricaria chamomilla L. (M. chamomilla) is commonly known as babuna, which belongs to the family Asteraceae [14]. The chief active constituents of chamomile include phenolics, flavonoids, and phytoestrogens [15,16]. Flavonoids have been linked to several of chamomile’s pharmacological activities, which have anti-inflammatory, antioxidant, antihepatotoxic and antiviral effects along with their vasculo protective and spasmolytic impacts. The most abundant flavonoids in chamomile extract are flavon, apigenin, and luteolin. Furthermore, the alcoholic extract of M. chamomilla flowers is reported to reduce the histological features of PCOS in the ovary and assist luteinizing hormone (LH) excretion in rats [17].
This work relies on the assumption that if the chamomile extract has the potential to improve PCOS-related hormonal and pathological changes, it should improve the thyroid dysfunction associated with this syndrome.
The purpose of this study was to investigate the possible protective role of M. chamomilla flowers extract against estradiol valerate-induced hypothyroidism during PCOS. In addition, the possible antioxidant and antiapoptotic mechanisms are examined.

The powdered flowers of M. chamomilla were repeatedly extracted with 70% ethanol after which the solution was filtered and evaporated under vacuum to yield the extract powder.

Twenty-four adult virgin female Wistar rats weighing 186 to 212 g were collected from King Fahad Medical Research Centre animal house, KAU, Jeddah, SA. The rats were left to acclimatize for 7 days at 21 °C temperature, 38% humidity, and 12:12 h light/dark cycle. There were no restrictions on feed and water offered to the rats. The research design was confirmed from the biomedical ethics research committee, college of medicine, KAU, Jeddah, SA under number (168–19).

2.5. Induction of PCOS and Hypothyroidism

PCOS was induced in 18 rats by injecting two estradiol valerate doses of 0.2 mg each, one dose at the beginning and the other after 6 weeks. After 6 weeks of the second estradiol valerate dose, PCOS and the associated hypothyroidism were assessed histologically and biochemically respectively. This model was previously reported by [17] and modified in our laboratory [11]. The 18 rats with PCOS were then divided into 3 groups (Groups 2, 3, and 4).

Rats BW was assessed at the beginning of the experiment (initial BW) and at the end of 12 weeks (final BW). The % BW increase was calculated by the following equation:
% BW increase = ((Initial BW−Final BW)/Initial BW) × 100

At the end of the experiment blood samples were gathered by heart puncture and the serum was then separated and kept frozen at −80 °C for determination of thyroid function markers and oxidative stress/antioxidant measures. The ovaries and left thyroid lobes were then dissected and kept in 10% neutral buffered formalin for assessment of PCOS induction, thyroid gland histopathological alterations and thyroid gland immunohistochemical expressions. The right thyroid lobes were collected and kept 1 h in 2.5% glutaraldehyde, postfixed for 30 min in 1% osmium tetroxide [19].

Thy W in g was determined for each rat.

Haematoxylin and eosin (H & E) stained sections of the ovary were examined for the presence of multiple cysts in the PCOS rats (n = 18) compared to the control rats (n = 6).

Results were represented as mean ± SE. Data were examined using ANOVA followed by the Tukey HSD test via the online calculator, astatsa.com/One-Way_Anova_with_TukeyHSD/. The p-value was fixed at 0.05.

In estradiol valerate injected rats (PCOS), ovaries sections stained with H & E showed marked histological features of PCOS such as the presence of many cysts and degenerated follicles compared to the control rats’ sections (Figure 2a,b).

3.3. Effect of M. Chamomilla Extract and Metformin on Body and Thyroid Gland Weight

3.4. Effect of M. Chamomilla and Metformin on PCOS-Associated Thyroid Dysfunction

This study clearly showed that the ethanolic extracts of M. chamomilla relieved the thyroid gland hypofunction demonstrated in estradiol valerate-induced PCOS in rats after 30 days of treatment. This therapeutic effect was characterized by restored serum TSH and estrogen levels, increased serum T3 and T4 levels, reduced oxidative stress, and improved antioxidant capacity. The thyroid gland histological study also showed significant improvements in the histology of thyroid follicles. Furthermore, M. chamomilla extract significantly reduced the apoptosis of the thyroid gland.
Several researchers have established an increased incidence of thyroid autoimmunity in females with PCOS. A previous study demonstrated higher concentrations of thyroid antibody in females with PCOS, increased thyroid size and increased incidence of hypoechogenic thyroid glands (favorable with thyroiditis). Moreover, in the same research, PCOS females showed an increased TSH concentration [20]. Likewise, this study showed increased thyroid gland weight and decreased serum TSH in PCOS rats suggesting that it may be autoimmune thyroiditis accompanying PCOS caused by estradiol valerate. So far, the pathophysiological mechanism that connects PCOS to hypothyroidism has not been strictly defined. Currently, the best explanation seems to be overlapping pathways with a complex interplay between PCOS, fattiness, thyroid hypofunction, and autoimmunity, operating to generate convergent clinical images [21]. A reasonable elucidation for higher thyroid autoimmunity in PCOS is probably due to the hyperestrogenic status of PCOS. Hyperestrogenism was suggested as a reason for enhanced autoimmune disorders in females contrasted with males [22,23]. Similarly, the results of this study showed increased serum concentration of estrogen in rats in the PCOS group together with the increased level of serum TSH, decreased T3 and T4 serum levels.
Treatment of PCOS rats with M. chamomilla extract significantly ameliorated the hypothyroid function as confirmed by the improved thyroid hormones and histological structure of thyroid follicles. Moreover, caspase-3 (apoptotic marker) expression was decreased in the thyroid gland of M. chamomilla rats compared to PCOS rats. This may be due to M. chamomilla caused a drop in the level of serum estrogen [15]. Phytoestrogens regulate the function of aromatase and the activity of major enzymes in estrogen biosynthesis. In the ovary, the enzyme converts androgens into estrogens. Thus, as phytoestrogens inhibit this enzyme, this process is blocked, thereby reducing the concentration of estrogen [24]. Chamomile extract constitutes the phytoestrogen active constituents; coumarins, which may decrease estrogen formation [25]. Furthermore, phytoestrogens inhibit the function of cytochrome P450 enzymes, thereby hampering cholesterol conversion to pregnenolone, and thus decreasing the production of estrogen [26,27]. In addition, the increase in free T3 and T4 is responsible for the decrease in TSH hormone.
Treatment of PCOS rats with metformin significantly ameliorated the hypothyroid function as confirmed by the decreased TSH and improved T3 and T4 hormones relative to PCOS rats. The results were in agreement with those of Xiaowen et al. [28], who reported that that metformin may directly affect the synthesis of thyroid hormone and then decrease the level of TSH. It has been demonstrated that metformin crosses the blood-brain barrier and a central mechanism of TSH inhibition may thus be an attractive explanation. Even though it activates AMPK in the periphery, metformin suppresses AMPK activity in the hypothalamus and possibly counteracts hypothalamic T3 action on TSH secretion [29].
Also, the caspase-3 expression was decreased in M. chamomilla rats compared to PCOS rats. These histological features were generally correlated to the thyroidal functional status because the serum T3 and T4 levels were enhanced in animals treated with estrogen or tamoxifen as compared to the vehicle-treated controls.
Oxidative stress occurs when the generation of reactive oxygen species (ROS) exceeds the activity of the antioxidant molecules and enzymes, resulting in injurious consequences for the body tissues and cells [30]. Studies have reported that PCOS was accompanied by oxidative stress that may result from obesity, hyperinsulinemia, and dyslipidemia. Administration of many antioxidants like omega-3 fatty acids, α-lipoic acid, and N-acetylcysteine ameliorated hyperlipidemia and insulin resistance in PCOS females [31]. Likewise, this study’s results showed increased serum MDA and decreased the serum concentration of GSH, GPx, and CAT in PCOS rats. Treatment of PCOS rats with M. chamomilla extract significantly improved serum oxidant/antioxidant status, compared to PCOS rats, which may be correlated with the improved PCOS-associated thyroid gland hypofunction. Chamomile contains plentiful antioxidants’ active constituents [32]. This study showed that the volatile chemical ingredients of M. chamomilla consist of sesquiterpenes compounds (α-bisabolol, bisabolol oxides, bisabolone oxide, trans-beta-farnesene), pentacosane, tetracosane, and tricosane [33,34,35]. The sesquiterpenes compounds may be essential for the antioxidant function of M. chamomilla extract [36,37].

The histological examination of the thyroid gland with both light and electron microscopy, as well as the hormone measurements, showed the efficacy of M. chamomilla ethanolic extract and metformin in improving thyroid hypofunction associated with PCOS in rats, through an antioxidant mechanism.

This work was supported by the Deanship of Scientific Research (DSR), King Abdulaziz University, Jeddah, under grant No. (DF-561-247-1441). The authors, therefore, gratefully acknowledge the DSR technical and financial support. 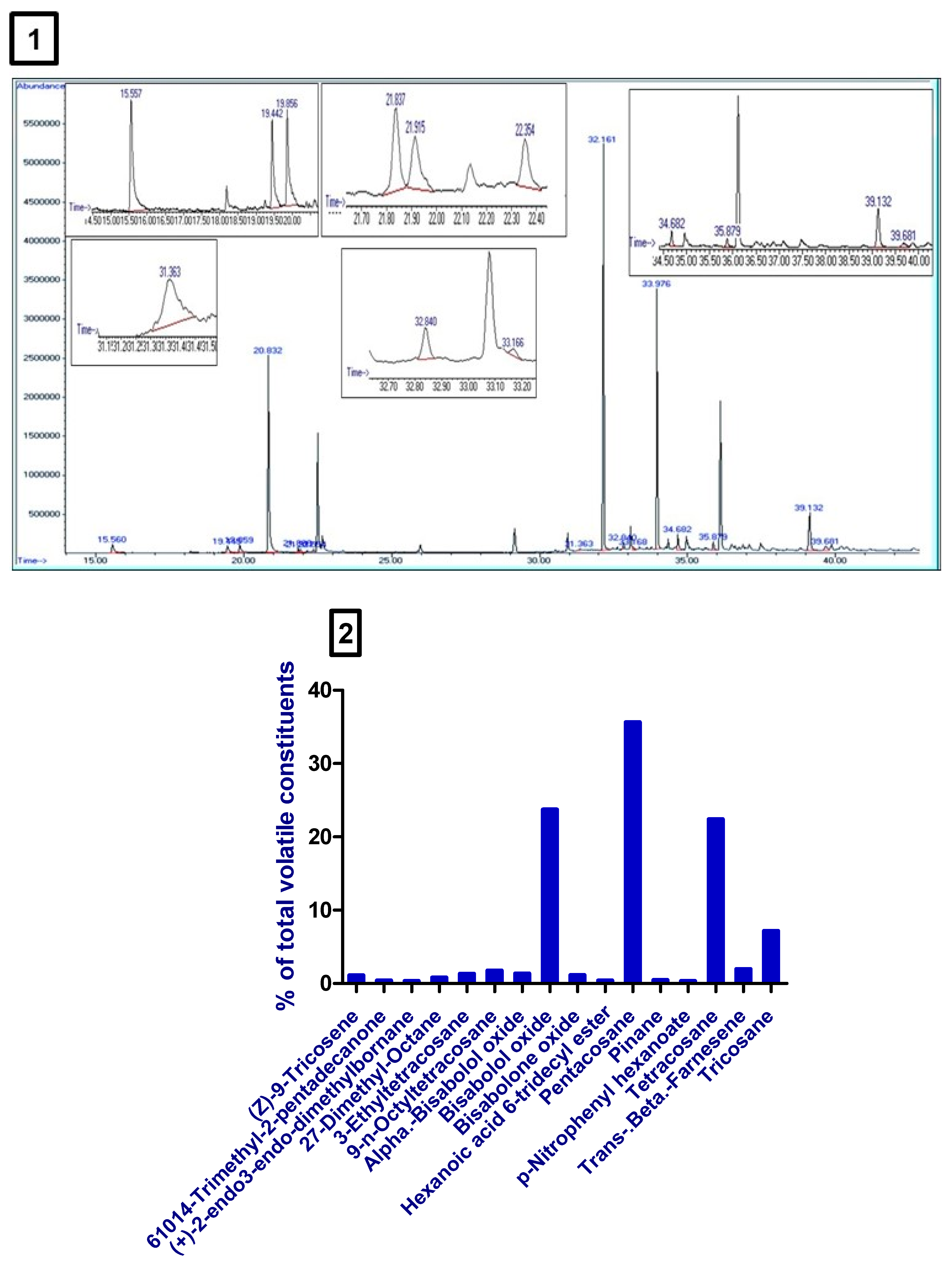 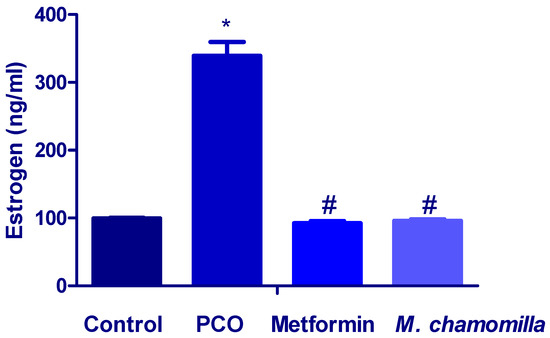 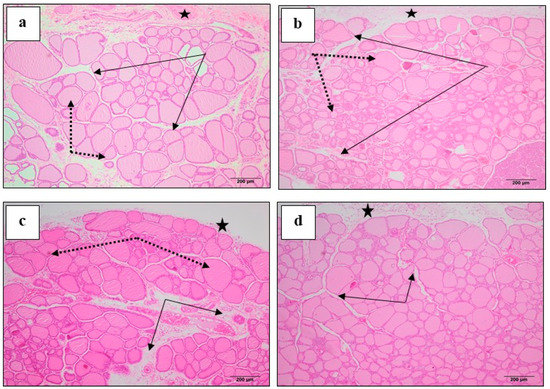 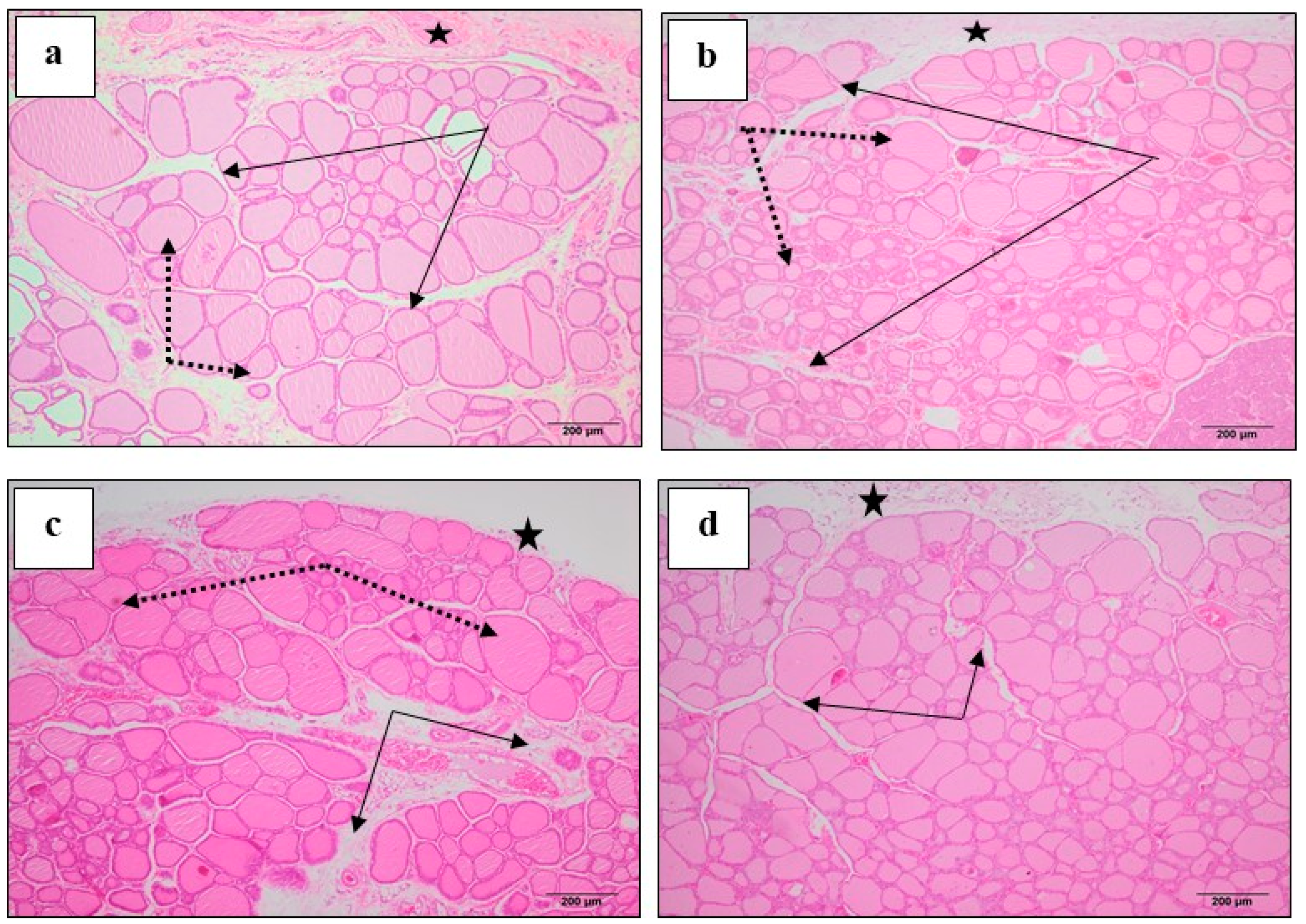 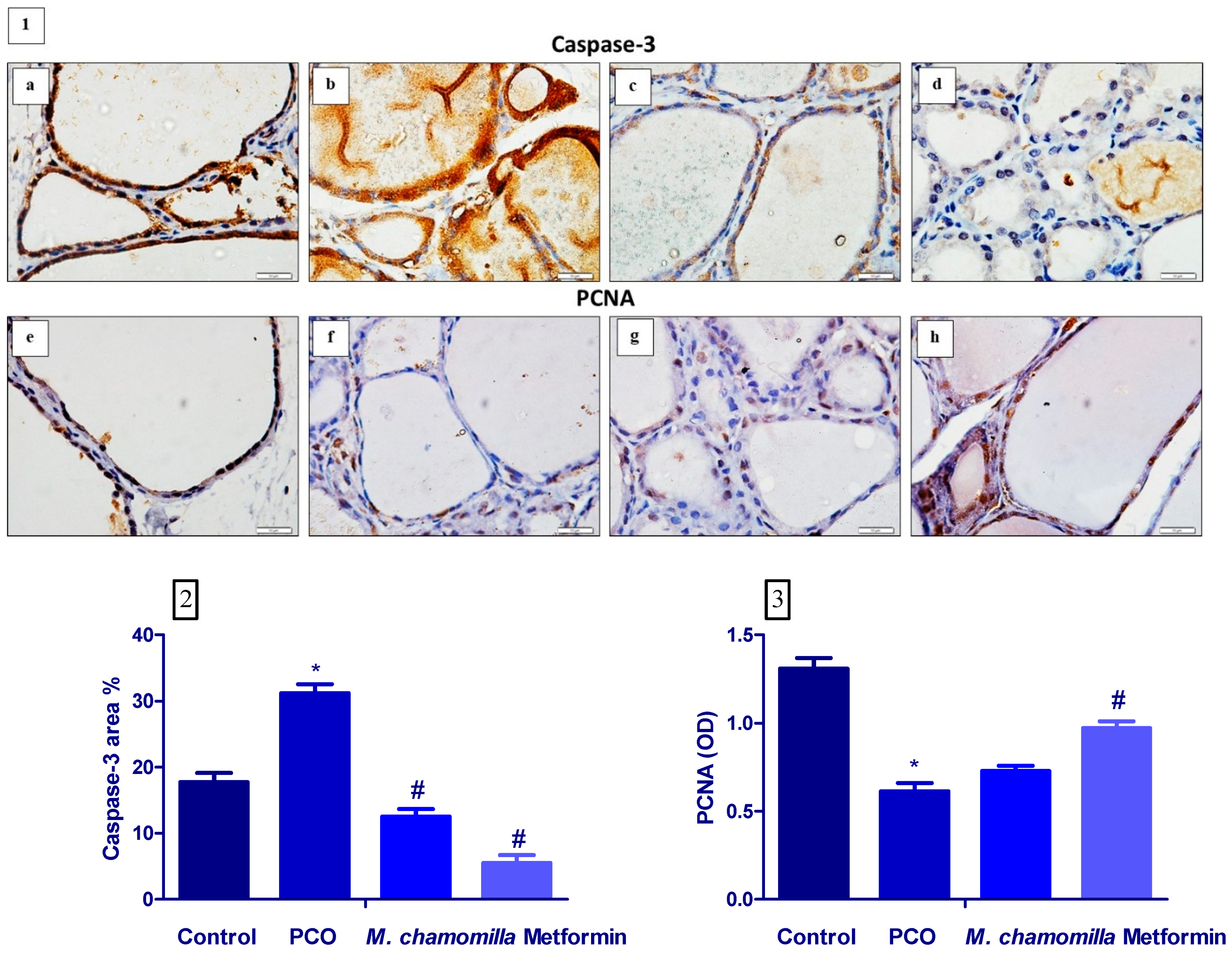