Cotranslational Folding of Proteins on the Ribosome

Back to GroEL-Assisted Protein Folding: GroES Binding-Induced Displacement of Denatured Proteins from GroEL to Bulk Solution

The main events in chaperone-assisted protein folding are the binding and ligand-induced release of substrate proteins. Here, we studied the location of denatured proteins previously bound to the GroEL chaperonin resulting from the action of the GroES co-chaperonin in the presence of Mg-ATP. Fluorescein-labeled denatured proteins (α-lactalbumin, lysozyme, serum albumin, and pepsin in the presence of thiol reagents at neutral pH, as well as an early refolding intermediate of malate dehydrogenase) were used to reveal the effect of GroES on their interaction with GroEL. Native electrophoresis has demonstrated that these proteins tend to be released from the GroEL-GroES complex. With the use of biotin- and fluorescein-labeled denatured proteins and streptavidin fused with luciferase aequorin (the so-called streptavidin trap), the presence of denatured proteins in bulk solution after GroES and Mg-ATP addition has been confirmed. The time of GroES-induced dissociation of a denatured protein from the GroEL surface was estimated using the stopped-flow technique and found to be much shorter than the proposed time of the GroEL ATPase cycle. View Full-Text
Keywords: GroEL-assisted protein folding; chaperonins; protein-protein interaction; bioluminescence; fluorescence GroEL-assisted protein folding; chaperonins; protein-protein interaction; bioluminescence; fluorescence
►▼ Show Figures 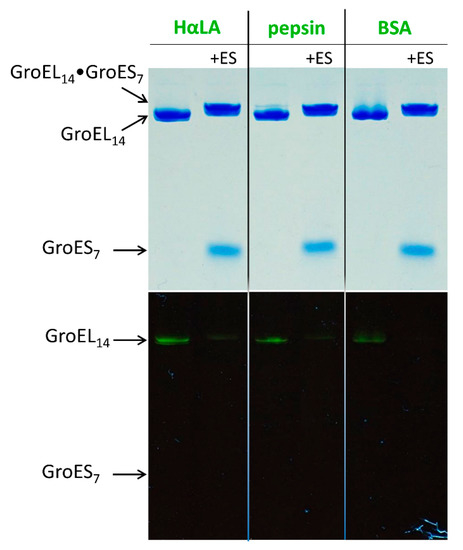