Modeling of the Hα Emission from ADITYA Tokamak Plasmas

Motional Stark effect (MSE) spectroscopy represents a unique diagnostic tool capable of determining the magnitude of the magnetic field and its direction in the core of fusion plasmas. The primary excitation channel for fast hydrogen atoms in injected neutral beams, with energy in the range of 25–1000 keV, is due to collisions with protons and impurity ions (e.g., He and heavier impurities). As a result of such excitation, at the particle density of 10–10 cm, the line intensities of the Stark multiplets do not follow statistical expectations (i.e., the populations of fine-structure levels within the same principal quantum number n are not proportional to their statistical weights). Hence, any realistic modeling of MSE spectra has to include the relevant collisional atomic data. In this paper we provide a general expression for the excitation cross sections in parabolic states within n = 3 for an arbitrary orientation between the direction of the motion-induced electric field and the proton-atom collisional axis. The calculations make use of the density matrix obtained with the atomic orbital close coupling method and the method can be applied to other collisional systems (e.g., He, Be, C, etc.). The resulting cross sections are given as simple fits that can be directly applied to spectral modeling. For illustration we note that the asymmetry detected in the first classical cathode ray experiments between the red- and blue-shifted spectral components can be quantitatively studied using the proposed approach. View Full-Text
Keywords: Motional Stark effect; cathode rays; fusion plasmas; plasma spectroscopy; density matrix; ion-atom collisions Motional Stark effect; cathode rays; fusion plasmas; plasma spectroscopy; density matrix; ion-atom collisions
►▼ Show Figures 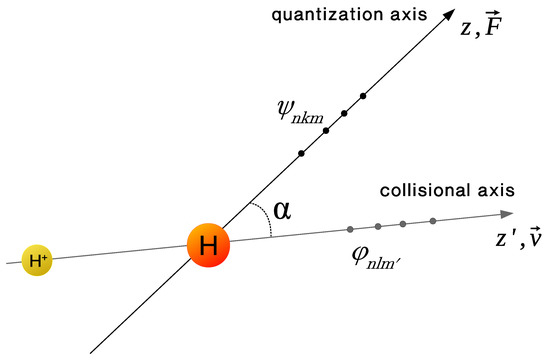