Improvement of the NIFS Atom and Molecular Database

The NIFS (National Institute for Fusion Science) Atom and Molecular Database, which has been available online since 1997, is a numerical atomic and molecular database of collision processes that is important for fusion research. This database provides the following: (1) the cross-sections and rate coefficients for ionization, excitation, and recombination caused by electron impact; (2) the charge transfer caused by heavy particle collision and collision processes of molecules; and (3) the sputtering yields of solids and backscattering coefficients from solids. It also offers a bibliographic database. We recently reconstructed the database system. The main purpose of the reconstruction was to migrate the database into an open-source architecture to make the system more flexible and extensible. The previous system used proprietary software and was difficult to customize. The new system consists of open-source software, including PostgreSQL database and Ruby on Rails. New features were also added to the system. The most important improvement is the interface with the Virtual Atomic and Molecular Data Center (VAMDC) portal. Using this interface, researchers can search for data in the NIFS database as well as in various other online databases simultaneously. View Full-Text
Keywords: databases; atoms; molecules; VAMDC; web databases; atoms; molecules; VAMDC; web
►▼ Show Figures 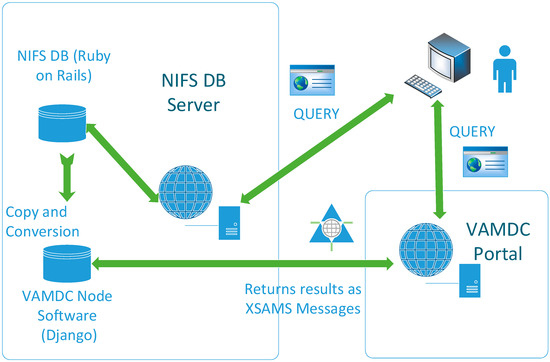