Oxygen impurity transport in the typical discharges of the Aditya tokamak was investigated using emissivity radial profile of emissivity of the spectral line (2p3p 3D3–2p3d 3F4) at 650.024 nm from the Be-like oxygen ion. This O4+ spectral line was recorded using a 1.0 m multi-track spectrometer capable of simultaneous measurements from eight lines of sight passing through the plasma. The oxygen transport coefficients were determined by reproducing the experimentally measured emissivity profiles of O4+, using a one-dimensional impurity transport code, STRAHL, and photon emissivity coefficient (PEC) belonging to that transition. The PEC values were obtained from both ADAS and NIFS atomic databases. Using both the databases, much higher values of diffusion coefficients compared to the neo-classical values were observed in both high and low magnetic field edge regions of typical Aditya tokamak Ohmic plasma. Although, almost similar profiles of diffusion coefficients were obtained using PEC values from both databases, the magnitude differs considerably. The maximum values of diffusion coefficients in the plasma edge at low field side of tokamak were ~45 and ~25 m2·s−1 when modeling was done using the ADAS and NIFS databases, respectively. Further analysis on the atomic data used in the calculation indicates that the difference in diffusion coefficients is mainly related to the variation in the values of atomic data of the two databases. View Full-Text
Keywords: visible emission; Be-like oxygen ion; impurity transport; Aditya tokamak; atomic data visible emission; Be-like oxygen ion; impurity transport; Aditya tokamak; atomic data
►▼ Show Figures 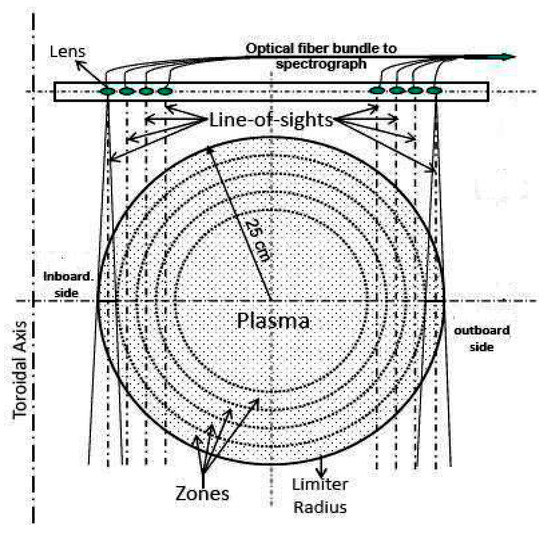