Electron-Induced Chemistry in the Condensed Phase
Previous Article in Journal

Neutral beam injection, for plasma heating, will supposedly be achieved, in ITER, by collisional detachment of a pre-accelerated D beam. Collisional detachment, however, makes use of a D-filled neutralisation chamber, which has severe drawbacks, including the necessity to set the D-ion source at −1 MV. Photodetachment, in contradistinction, would have several advantages as a neutralisation method, including the absence of gas injection, and the possibility to set the ion source close to the earth potential. Photodetachment, however, requires a very high laser flux. The presented work has consisted in implementing an optical cavity, with a finesse greater than 3000, to make such a high illumination possible with a state-of-the-art CW (continuous-wave) laser. A 1.2 keV -beam (only 20 times slower than the 1 MeV ion beams to be prepared for ITER) was photodetached with more-than-50% efficiency, with only 24 W of CW laser input. This experimental demonstration paves the way for developing real-size photoneutralizers, based on the implementation of refolded optical cavities around the ion beams of neutral beam injectors. Depending on whether the specifications of the laser power or the cavity finesse will be more difficult to achieve in real scale, different architectures can be considered, with greater or smaller numbers of optical refoldings or (inclusively) optical cavities in succession, on the beam to be neutralised. View Full-Text
Keywords: photodetachment; magnetically confined fusion; neutral beam injection; plasma heating; optical cavity amplification photodetachment; magnetically confined fusion; neutral beam injection; plasma heating; optical cavity amplification
►▼ Show Figures 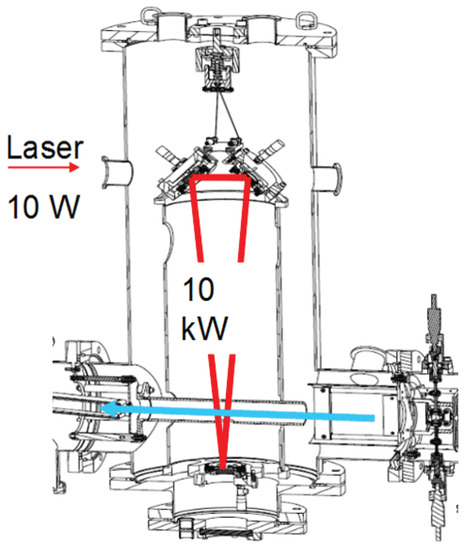