Differences in Pregnancy Metabolic Profiles and Their Determinants between White European and South Asian Women: Findings from the Born in Bradford Cohort

Associations between Blood Metabolic Profile at 7 Years Old and Eating Disorders in Adolescence: Findings from the Avon Longitudinal Study of Parents and Children

We investigated the association between 158 metabolic traits at 7 years with anorexia nervosa (Figure 1 and Figure 2) and binge-eating disorder (Figure 3 and Figure 4) at 14 (blue), 16 (red), 18 years (green), and cumulatively until 18 years (black). For our main analyses, we fitted 1264 logistic regression models that indicate whether an elevated metabolic trait level is associated with lower or higher risk of an eating disorder diagnosis in adolescence. We present the data by plotting the point estimates (circles or dots) and respective confidence intervals (error bars) in forest plots (Figure 1, Figure 2, Figure 3 and Figure 4) where metabolic traits are clustered by biochemical classes defined by core chemical structure (e.g., fatty acids) or metabolic pathway (e.g., glycolysis). In forest plots, the points to right of the vertical black line that marks the baseline risk (i.e., 1) indicate elevated risk for an eating disorder whereas points on the left of the black vertical line indicate lower risk for an eating disorder in adolescence.

We also conducted a sensitivity analysis (see Section 4.4.) to explore how much of the association was confounded by BMI or calorie intake. Findings were broadly comparable across models with similar point estimates and overlapping CI (for example, for the association between anorexia nervosa and total fatty acids at 18 years, all point estimates were approximately OR = 0.8, 95% CI = 0.5 to 1.2). For anorexia nervosa, associations for creatinine attenuated by BMI adjustment across the four time points. Forest plots comparing across models with different adjustments can be found in Figures S2a–S5b, 7a–10b, Supplementary Materials.

Anorexia nervosa and binge-eating disorder diagnoses, at 14, 16, and 18 years, according to DSM-5 criteria, were obtained as described previously [20]. Anorexia nervosa or binge-eating disorder by age 18 was defined as all individuals who were diagnosed with anorexia nervosa or binge-eating disorder at any one of the three time points: 14, 16, or 18 years, and had not crossed over to another eating disorder. The reference group was individuals who had not experienced any eating disorder, nor eating disorders symptoms by age 18 years, as well as participants who had not experienced any eating disorder, nor eating disorders symptoms, at 14 and 16 years, but had missing data at 18 years. Maternal education was obtained by questionnaire during pregnancy and used as an indicator of family socioeconomic position (A levels or higher, lower than A levels; A levels are needed to enroll in university in the UK). The participants’ sex was obtained from obstetric records and age was calculated from their dates of birth and dates of questionnaires or clinic assessments at age 7 years. BMI was calculated from measurements collected during clinical assessments when participants were approximately 7 years old. Height was measured in light clothing without shoes to the nearest 0.1 cm using a Harpenden stadiometer and weight was recorded to the nearest 0.1 kg using a Tanita scale. BMI was calculated as weight (kg) divided by the square of height (m2). Calorie intake at 7 years was assessed through a food frequency questionnaire as extensively described previously [30].

A high-throughput (1H) NMR metabolomics platform, Nightingale Health© (Helsinki, Finland), was used to quantify 158 metabolic traits in children’s non-fasting EDTA-plasma collected at 7 years old. The platform quantifies routine lipids, 14 lipoprotein subclasses, including particle concentration and lipids transported by these particles (see Appendix A), various fatty acids and fatty acids traits (e.g., chain length, degree of unsaturation, see Appendix A), amino acids, ketone bodies, glycolysis and gluconeogenesis-related metabolites, fluid balance, and one inflammation-related metabolite. This set of metabolic traits represent a broad molecular signature of systemic metabolism [31] and most are quantified in clinically meaningful concentrations (e.g., mmol/L). Fatty acids were modelled in original units and as ratios (expressed in %) to total fatty acids. Details of this platform and its use in epidemiological studies have been described elsewhere [32,33,34,35,36]. In addition, we calculated the phenylalanine/tyrosine ratio as it was shown to be a marker of catabolism in individuals with anorexia nervosa [37,38].

All metabolic traits were standardized by subtracting the sample mean and dividing by the sample standard deviation (SD), as this allows comparison across metabolic traits with different units and/or different concentration ranges. Logistic regression was used to examine the associations of each EDTA-plasma metabolic traits at 7 years old with either anorexia nervosa or binge-eating disorder assessed at 14, 16, 18, and cumulatively by 18 years. Associations are reported as odds ratios (OR) reflecting the change in odds of anorexia nervosa or binge-eating disorder per 1 SD increase in metabolic trait concentration at 7 years old. We fitted four models: in model 1, ORs were adjusted for maternal education and child’s sex and age; model 2, had the same covariates as model 1 plus child’s BMI at 7 years; model 3, was as model 1 plus child’s calorie intake at 7 years; and model 4 as model 1 with further adjustment for child’s BMI and calorie intake at 7 years. These confounders were decided a priori, we report the results of model 4 in our main analyses and comparison across models is shown in Supplementary Material. Our study is exploratory and we focus on effect size and precision [39,40]. All analyses were conducted using Stata version 14.1 (Stata Inc., TX, USA) and R version 3.5.1 (R Foundation for Statistical Computing, Vienna, Austria).

We are extremely grateful to all the families who took part in this study; the midwives for their help in recruiting them; and the whole ALSPAC team, which includes interviewers, computer and laboratory technicians, clerical workers, research scientists, volunteers, managers, receptionists, and nurses.

C.M.B. reports: Shire (grant recipient, Scientific Advisory Board member) and Pearson (author, royalty recipient). D.A.L. has received support from several National and International government and charitable funders as well as Medtronic LTD and Roche Diagnostics research that is not related to the study presented in this paper. The other authors report no conflicts. 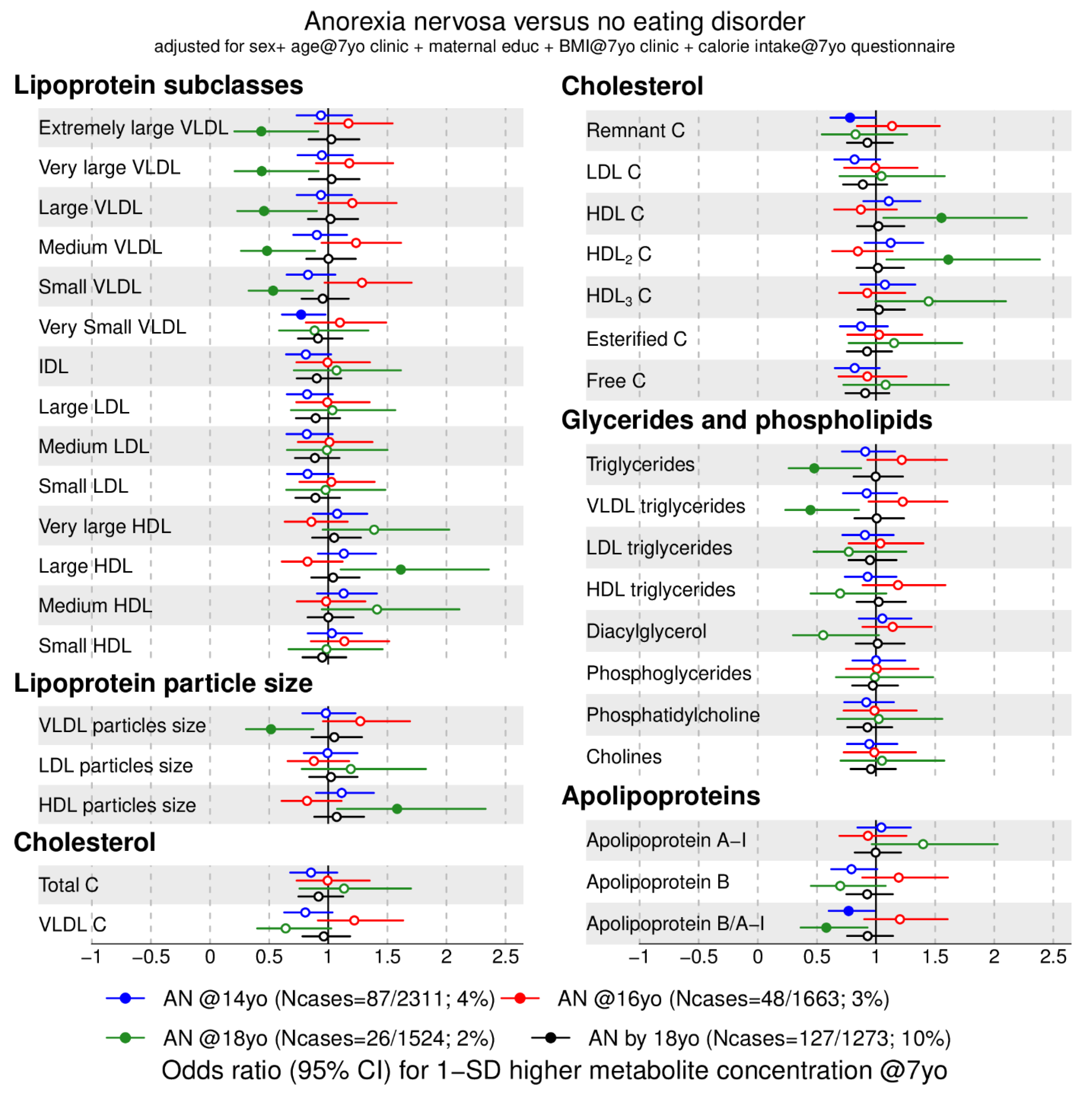