Nicotinamide adenine dinucleotide (NAD) is an essential redox carrier, whereas its degradation is a key element of important signaling pathways. Human cells replenish their NAD contents through NAD biosynthesis from extracellular precursors. These precursors encompass bases nicotinamide (Nam) and nicotinic acid and their corresponding nucleosides nicotinamide riboside (NR) and nicotinic acid riboside (NAR), now collectively referred to as vitamin B3. In addition, extracellular NAD+ and nicotinamide mononucleotide (NMN), and potentially their deamidated counterparts, nicotinic acid adenine dinucleotide (NAAD) and nicotinic acid mononucleotide (NAMN), may serve as precursors of intracellular NAD. However, it is still debated whether nucleotides enter cells directly or whether they are converted to nucleosides and bases prior to uptake into cells. Here, we studied the metabolism of extracellular NAD+ and its derivatives in human HEK293 cells using normal and serum-free culture medium. Using medium containing 10% fetal bovine serum (FBS), mono- and dinucleotides were degraded to the corresponding nucleosides. In turn, the nucleosides were cleaved to their corresponding bases. Degradation was also observed in culture medium alone, in the absence of cells, indicating that FBS contains enzymatic activities which degrade NAD+ intermediates. Surprisingly, NR was also rather efficiently hydrolyzed to Nam in the absence of FBS. When cultivated in serum-free medium, HEK293 cells efficiently cleaved NAD+ and NAAD to NMN and NAMN. NMN exhibited rather high stability in cell culture, but was partially metabolized to NR. Using pharmacological inhibitors of plasma membrane transporters, we also showed that extracellular cleavage of NAD+ and NMN to NR is a prerequisite for using these nucleotides to maintain intracellular NAD contents. We also present evidence that, besides spontaneous hydrolysis, NR is intensively metabolized in cell culture by intracellular conversion to Nam. Our results demonstrate that both the cultured cells and the culture medium mediate a rather active conversion of NAD+ intermediates. Consequently, in studies of precursor supplementation and uptake, the culture conditions need to be carefully defined. View Full-Text
Keywords: NAD metabolism; extracellular NAD+ intermediates; NMR spectroscopy; human cells NAD metabolism; extracellular NAD+ intermediates; NMR spectroscopy; human cells
►▼ Show Figures 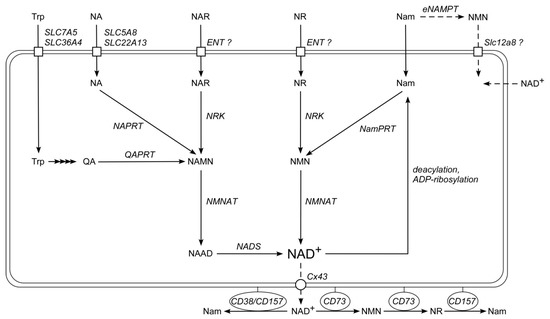