1H-NMR Urinary Metabolic Profile, A Promising Tool for the Management of Infants with Human Cytomegalovirus-Infection
Previous Article in Journal

Congenital adrenal hyperplasia (CAH) describes a group of autosomal recessive disorders of steroid biosynthesis, in 95% of cases due to 21-hydroxylase deficiency. The resulting hormonal imbalances lead to increased 17-hydroxyprogesterone and androgens levels, at the expense of decreased concentrations of glucocorticoids and, in some cases, of mineralocorticoids. A variety of clinical presentations accompany a range of severities, which are described as different forms of CAH, and are the result of these hormonal imbalances. The incidence of CAH worldwide is approximately 1 in 15,000 live births, and is population-dependent; thus, its inclusion in neonatal screening tests is widely discussed. Diagnosis of CAH is based on the quantification of 17-hydroxyprogesterone, usually by immunoassay, which has low specificity and high false-positive rates, resulting in a relatively high demand for a second-tier confirmation test. We report a case of a newborn recognized as female at birth, but showing ambiguous genitalia and other CAH clinical features, including hypernatremia, in the first days of life. In addition to the classical assays, liquid chromatography–tandem mass spectrometry was used to determine the serum steroid profile, allowing for the accurate and simultaneous quantification of seven steroids in the same analysis. Such an application immediately revealed an alteration in the levels of specific steroids related to CAH, leading to an early intervention by hormone replacement therapy. Subsequently, the diagnosis of classic CAH due to 21-hydroxylase deficiency was further confirmed by molecular testing. View Full-Text
Keywords: congenital adrenal hyperplasia; steroid profiling; mass spectrometry; metabolomics; LC–MS/MS congenital adrenal hyperplasia; steroid profiling; mass spectrometry; metabolomics; LC–MS/MS
►▼ Show Figures 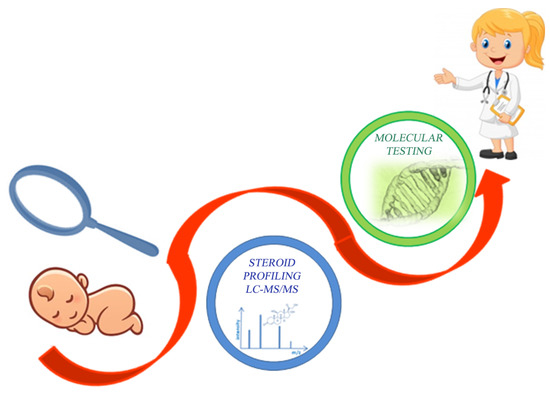