Cancer cells often have dysregulated metabolism, which is largely characterized by the Warburg effect—an increase in glycolytic activity at the expense of oxidative phosphorylation—and increased glutamine utilization. Modern metabolomics tools offer an efficient means to investigate metabolism in cancer cells. Currently, a number of protocols have been described for harvesting adherent cells for metabolomics analysis, but the techniques vary greatly and they lack specificity to particular cancer cell lines with diverse metabolic and structural features. Here we present an optimized method for untargeted metabolomics characterization of MDA-MB-231 triple negative breast cancer cells, which are commonly used to study metastatic breast cancer. We found that an approach that extracted all metabolites in a single step within the culture dish optimally detected both polar and non-polar metabolite classes with higher relative abundance than methods that involved removal of cells from the dish. We show that this method is highly suited to diverse applications, including the characterization of central metabolic flux by stable isotope labelling and differential analysis of cells subjected to specific pharmacological interventions. View Full-Text
Keywords: cell metabolomics; breast cancer; glucose; glutamine; isotope labelling cell metabolomics; breast cancer; glucose; glutamine; isotope labelling
►▼ Show Figures 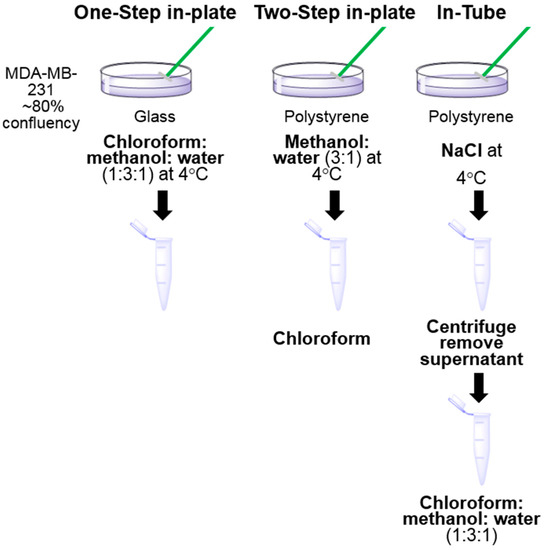