In Vivo Rate of Formaldehyde Condensation with Tetrahydrofolate

Formaldehyde is a highly reactive compound that participates in multiple spontaneous reactions, but these are mostly deleterious and damage cellular components. In contrast, the spontaneous condensation of formaldehyde with tetrahydrofolate (THF) has been proposed to contribute to the assimilation of this intermediate during growth on C1 carbon sources such as methanol. However, the in vivo rate of this condensation reaction is unknown and its possible contribution to growth remains elusive. Here, we used microbial platforms to assess the rate of this condensation in the cellular environment. We constructed Escherichia coli strains lacking the enzymes that naturally produce 5,10-methylene-THF. These strains were able to grow on minimal medium only when equipped with a sarcosine (N-methyl-glycine) oxidation pathway that sustained a high cellular concentration of formaldehyde, which spontaneously reacts with THF to produce 5,10-methylene-THF. We used flux balance analysis to derive the rate of the spontaneous condensation from the observed growth rate. According to this, we calculated that a microorganism obtaining its entire biomass via the spontaneous condensation of formaldehyde with THF would have a doubling time of more than three weeks. Hence, this spontaneous reaction is unlikely to serve as an effective route for formaldehyde assimilation. View Full-Text
Keywords: one-carbon metabolism; spontaneous reaction; auxotrophy; serine cycle; phenotypic phase plane one-carbon metabolism; spontaneous reaction; auxotrophy; serine cycle; phenotypic phase plane
►▼ Show Figures 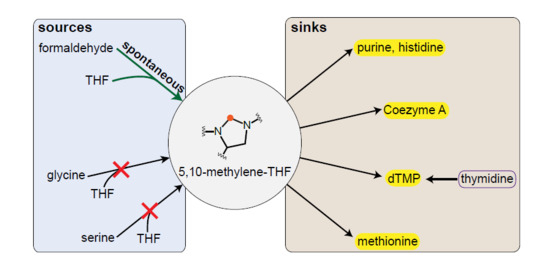