Giardia lamblia, a causative agent of persistent diarrhea in humans, domestic animals, and cattle, is usually treated with nitro compounds. Consequently, enzymes involved in anaerobic nitro reduction have been investigated in detail as potential targets. Their role within the normal metabolic context is, however, not understood. Using 1H high-resolution magic angle spinning (HR-MAS) NMR spectroscopy, we analyzed the metabolomes of G. lamblia trophozoites overexpressing three nitroreductases (NR1–NR3) and thioredoxin reductase (TrxR), most likely a scavenger of reactive oxygen species, as suggested by the results published in this study. We compared the patterns to convenient controls and to the situation in the nitro drug resistant strain C4 where NR1 is downregulated. We identified 27 metabolites in G. lamblia trophozoites. Excluding metabolites of high variability among different wildtype populations, only trophozoites overexpressing NR1 presented a distinct pattern of nine metabolites, in particular arginine catabolites, differing from the respective controls. This pattern matched a differential pattern between wildtype and strain C4. This suggests that NR1 interferes with arginine and thus energy metabolism. The exact metabolic function of NR1 (and the other nitroreductases) remains to be elucidated. View Full-Text
Keywords: amino acids; arginine; metabolism; giardia; HR-MAS; resistance amino acids; arginine; metabolism; giardia; HR-MAS; resistance
►▼ Show Figures 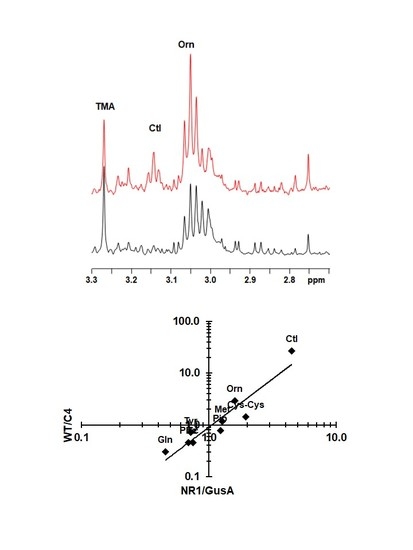