Design, Synthesis and In Vitro Antimicrobial Activity of 6-(1H-Benzimidazol-2-yl)-3,5-dimethyl-4-oxo-2-thio-3,4-dihydrothieno[2,3-d]pyrimidines

A series of 5-methyl-7-phenyl-3H-thiazolo[4,5-b]pyridin-2-ones has been designed, synthesized, and characterized by spectral data. Target compounds were screened for their antimicrobial activity against some pathogenic bacteria and fungi, and most of them showed moderate activity, especially compound 3g, which displayed the potent inhibitory effect against Pseudomonas aeruginosa and Escherichia coli with MIC value of 0.21 μM. The active thiazolopyridine derivatives 3c, 3f, and 3g were screened for their cytotoxicity effects on HaCat, Balb/c 3T3 cells using MTT assay, which revealed promising results. In silico assessment for compounds 3c, 3f, and 3g also revealed suitable drug-like parameters and ADME properties. The binding interactions of the most active compound 3g were performed through molecular docking against MurD and DNA gyrase, with binding energies and an inhibitory constant compared to the reference drug ciprofloxacin. The tested thiazolo[4,5-b]pyridines constitute an exciting background for the further development of new synthetic antimicrobial agents. View Full-Text
Keywords: thiazolo[4,5-b]pyridines; antimicrobial activity; pharmacokinetics prediction; molecular docking thiazolo[4,5-b]pyridines; antimicrobial activity; pharmacokinetics prediction; molecular docking
►▼ Show Figures 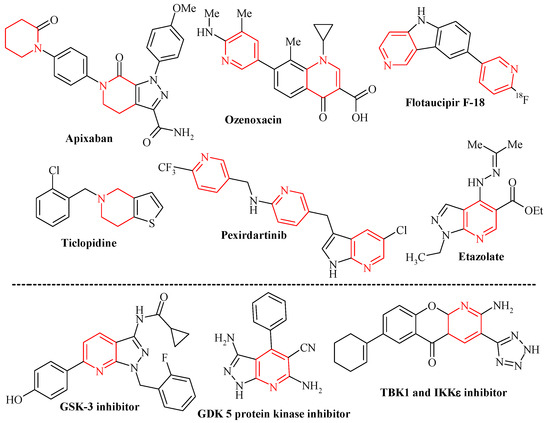 Roman Lesyk
Roman Lesyk is a professor of pharmaceutical/medicinal chemistry at Danylo Halytsky Lviv National Medical University. During 2004–2014, he occupied the dean’s position at the Pharmaceutical Faculty, whereas, since 2015, he was a Head of the Department of Pharmaceutical, Organic and Bioorganic Chemistry. His research interests concern 4-azolidinone cores within structure-based drug design, especially in the area of the medicinal chemistry of anticancer, anti-inflammatory, anticonvulsant, antimicrobial, antiviral, antitrypanosomal, and antimicrobial agents. He was a promoter of 16 PhD theses. Prof. Roman Lesyk is a Doctor honoris causa of the Poznan University of Medical Sciences (2019) and Laureate of the State Prize of Ukraine in Science and Technology (2019).
Zoom | Orient | As Lines | As Sticks | As Cartoon | As Surface | Previous Scene | Next Scene
We use cookies on our website to ensure you get the best experience. Read more about our cookies here.
Accept
We have just recently launched a new version of our website. Help us to further improve by taking part in this short 5 minute survey here. here.
Never show this again