Phytochemistry and Evidence-Based Traditional Uses of the Genus Achillea L.: An Update (2011–2021)

The pharmaceutical market is seeing an increased need for drugs available for transdermal delivery. Since the first transdermal patch was approved in the US by the FDA in 1979, not only has the number of transdermal drugs significantly increased but the rate at which transdermal drugs are approved has also more than tripled in recent years [1,2]. Despite this increase, there are still a significant number of drugs that could meet the criteria for transdermal delivery but remain commercially available via limited routes—most commonly, the oral route. There is a need for evidence to support the transdermal delivery of active pharmaceutical ingredients (APIs) to offer therapeutic alternatives for APIs that meet one or more of the below criteria [1,2]:
Additionally, there are a number of factors likened to API that need to be taken into consideration when one wishes to develop a transdermal dosage form, as the physicochemical properties of APIs determine their route and degree of absorption. These include, but are not limited to, pKa, molecule size, molecule stability, possibility of binding to epidermal components found along the way, and the oil/water partition coefficient. It is known, for example, that drugs in their nonionic forms have a greater capacity for permeation than those in dissociated forms. From this statement, it is clear that a lipophilic—more than a hydrophilic—character is necessary, although amphipathic molecules are good candidates to be promptly permeated. Another condition that directly affects absorption is the system’s thermodynamic potential. The greater the difference in concentration between the vehicle and the skin, the higher the potential and, hence, the greater the drive into the skin. Additionally, the pH of the formulation also interferes with the permeability. This is because, depending on its value, the ionization of weak acids and bases may occur, which is not desirable, since neutral substances are easier to permeate. In addition to the pH of the formulation, the skin pH (~6 in adults) also interferes with the degree of ionization of the compound, both of which should be taken into account. Finally, the factors related to patients are also important, as the skin is a tissue that is extremely rich in enzymes, which can metabolize drugs during their courses, as they catalyze both phase I and phase II reactions. This can be strategically considered in order to add a prodrug to the formulation so that it only becomes pharmacologically active when it crosses the skin. On the other hand, unforeseen reactions may occur that may inactivate it or change its intended action [3,4,5].
In this work, we focused on some of the APIs that meet the abovementioned criteria. Metformin HCl is a commonly prescribed drug for the management of type II diabetes and is often considered as a first-line treatment for this condition. It is an example of a drug that, when used orally, can cause significant gastrointestinal adverse effects, including nausea and diarrhea [6]. In addition to its utility for the systemic management of conditions such as diabetes, metformin HCl may also benefit from the local administration of specific types of cicatricial alopecia [7]. The transdermal penetration of metformin HCl has already been demonstrated in Pentravan, but in order to offer a complete transdermal solution, the stability must also be evaluated [8].
Danazol is a synthetic steroid used in the management of conditions such as endometriosis [9]. It is another example of a drug that may benefit from transdermal use, as it undergoes extensive first-pass metabolism, and as a result, it demonstrates poor oral bioavailability [10]. Resveratrol is a case of a substance with two isomeric forms, one of which undergoes significant and extensive metabolism. Trans-resveratrol undergoes significant degradation in acidic environments, which may contribute to its reduced oral bioavailability [11]. For both of these APIs, an alternative route of administration, such as transdermal application, would bypass the first-pass and gut metabolism, potentially offering increased bioavailability. In addition to its systemic use, resveratrol may also have utility topically for a variety of cutaneous disorders, such as inflammation and aging skin, and may even have antiproliferative activity [12]. Delivery through the outer layers of the skin will ensure it gets to the site of action in pharmaceutically relevant levels and provides an alternative to systemic use via the oral route.
Vitamin D3 (cholecalciferol) may also benefit from transdermal administration. When taken orally, systemic bioavailability is subject to significant variability, especially with patients suffering from fat malabsorption conditions [13]. Topical vitamin D3, similarly to resveratrol, may also play a role in the localized management of inflammatory skin conditions such as psoriasis [14].
Given the potential therapeutic benefits of a transdermal delivery system for each of these APIs, an evaluation of the stability in bases with known transdermal capabilities is necessary to provide the compounding pharmacist with confidence when providing therapeutic alternatives to patients for whom an oral route cannot be tolerated, for patients who need APIs that are associated with significant oral metabolism, or for patients that necessitate high local concentrations for the management of cutaneous conditions [15,16].
In this study, the stability of danazol, metformin HCl, and resveratrol as individual ingredients, as well as metformin HCl, resveratrol, and Vitamin D3 in combinations at bracketed high and low concentrations, has been evaluated over a period of 6 months, using a ready-to-use transdermal vehicle for compounding pharmacies (Pentravan® or Pentravan® Plus; Fagron, St. Paul, MN, USA).

The API samples were assayed by high-performance liquid chromatography (HPLC) at predetermined timepoints to verify the stability of the API in the vehicles. Aliquots for quantification (variable for each API) were withdrawn and diluted in order to obtain work solutions in the concentrations described in Table 1. Sampling times were: initial (T = 0), 1 month (T = 1), 2 months (T = 2), 3 months (T = 3), 4 months (T = 4), 5 months (T = 5), and 6 months (T = 6).
All creams were assayed independently, and at each timepoint, a system suitability check was performed using 5 standards run; the analyses were considered valid if the relative standard deviation (RSD) of each suitability check was lower than 2%. The evaluation parameter for the stability was the API assay with respect to T = 0 using the HPLC method (results given as percentage ± standard deviation). This normalization to force T = 0 to have a 100% result in the assay was performed to adequately see the possible decreases in contents of the APIs and to evaluate their suitability for use (for the products to be considered stable/compatible, the relative assay should lie within 90–110%, according to what international pharmacopeias suggest for finished products, such as the United States Pharmacopeia, British Pharmacopoeia, and European Pharmacopoeia) [17,18].

All analyses were performed by HPLC using the conditions described in Table 2. The APIs contents were calculated by direct comparisons of their areas with the standard ones. All samples were diluted to the work concentration with the mobile phase and then filtered through a 0.45-mm filter membrane and degassed using an ultrasonic apparatus for 30 min immediately before use. The standards were also diluted in the mobile phase. All columns were from Phenomenex (Torrance, CA, USA) and were connected with a precolumn with the same packing (4.0 × 3.0 mm, 5 mm) from the same manufacturer. All volumetric glassware and analytical balances used were calibrated.

At each sampling time, the visual appearance of the creams was also evaluated to verify their homogeneity and physical stability (data not shown). Throughout the whole study, no phenomena such as creaming, sedimentation, flocculation, coalescence, or phase separation were observed when the drug content was within the specifications.
The chemical stability results are shown in Table 3 and Figure 1, expressed as the assay (in %). For the creams to be considered stable, the relative assay should lie within 90–110%.
In our study, a beyond-use date (BUD) of 6 months was observed for the formulations stored at room temperature. In the absence of stability information for a specific formulation, USP <795> (Pharmaceutical compounding—nonsterile preparations) can be used as a guideline, which advises a beyond-use date of no more than 30 days [19]. The long BUD of 180 days presented in this study offers an increased convenience for both the compounding pharmacist and the patient.
The lower and upper limits were set as 90% and 100% of the labeled concentrations, respectively. The system suitability was checked for all analyses, with a relative standard deviation lower than 2%.

Conceptualization and methodology, C.Z. and S.T.; writing—original draft preparation and writing—review and editing, H.P., C.Z. and S.T. All authors have read and agreed to the published version of the manuscript.

The authors work for Fagron. The funders had no role in the design of the study; in the collection, analyses, or interpretation of the data; in the writing of the manuscript; or in the decision to publish the results. 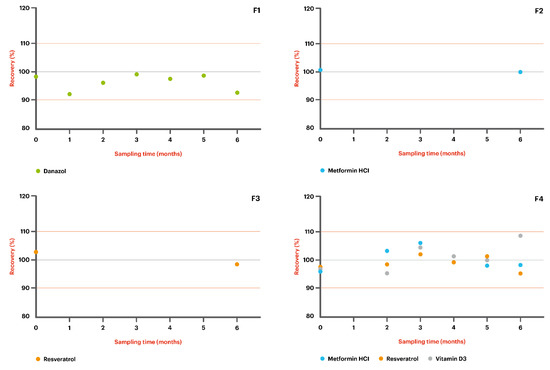 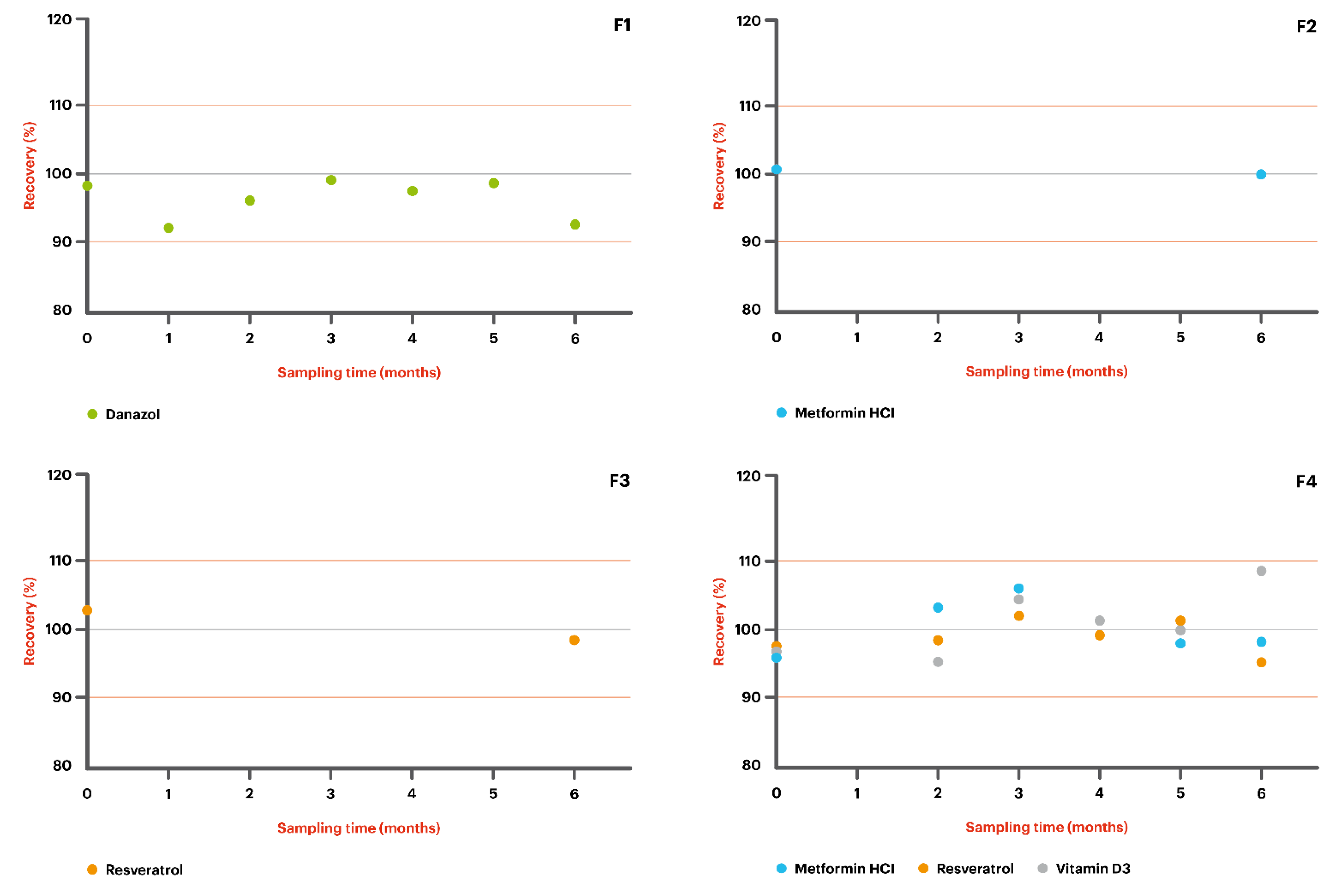