Antiaging Properties of the Ethanol Fractions of Clove (Syzygium aromaticum L.) Bud and Leaf at the Cellular Levels: Study in Yeast Schizosaccharomyces pombe

The pharmaceutical industry has produced various antioxidant-based antiaging cosmetic and supplement products. The current trend in the cosmetics industry is an application of natural resources, including natural-based antioxidant compounds over synthetic ones as cosmetic ingredients. Such a strategy may potentially reduce the production cost and avoid adverse effects of the synthetic materials used [1]. Indeed, the United States Food and Drug Administration (US FDA) reported an increase in cases of adverse health effects on cosmetic products from 2015 as many as 706 to 1591 cases in 2016, and more than 35% of skincare products caused severe health problems [2].
Aging at the cellular level is one of the inducers of a decline in the function of tissues and organs that can increase the prevalence of diseases, one of which is degenerative diseases. Cellular aging can occur due to exposure and accumulation of reactive oxygen species (ROS) from UV lights, cigarette smoke, pollutants, and chemicals in cosmetic products. The exposure of ROS sources can accelerate cell aging, for example, in skin cells. The aging of skin cells is characterized by facial wrinkles, dull skin color, thickening of the skin, gradual reduction in skin elasticity, slowing of epidermal turnover, which causes a decrease in one’s aesthetics and appearance [3]. The continuous accumulation of ROS molecules with an unbalanced intracellular antioxidative mechanism will induce oxidative stress. Oxidative stress can damage the activity of essential macromolecules such as DNA, proteins, carbohydrates, and lipids that can induce cell aging [4]. Antioxidant activity plays a vital role in helping to slow down the cellular aging process [3]).
Natural cosmetic ingredients are one solution in providing cosmetic products based on safe antioxidant and antiaging activities. One of the plants reported to have antioxidant activity is clove (Syzygium aromaticum L.). Previous studies reported that clove extract could extend the life span of model organisms, Schizosaccharomyces pombe and Saccharomyces cerevisiae, and increase yeast resistance to hydrogen peroxide (H2O2) oxidative stress [5,6]. However, the information regarding the activity of clove leaf and bud fractions as antioxidant and antiaging agents at the cellular level is not yet available. Therefore, this study was aimed to analyze the antioxidant activity and antiglycation activity of the n-hexane and ethanol fractions from clove bud and leaf extract in vitro and their potential in delaying aging at the cellular level. S. pombe as a model of organism was used to study the potential mode of action of clove fraction in delivering antiaging properties.

Total flavonoid was quantified based on the previous method [7]. Each sample fraction was adjusted to 1000 μg·mL−1. 0.5 mL sample fraction solution was then mixed with 0.5 mL 2% AlCl3 (Merck, Billerica, MA, USA), and incubated at room temperature for 30 min. The absorbance was measured at 415 nm with spectrophotometer UV-Vis. Blank solution containing sample without the addition of AlCl3 2% was treated the same as samples. Quercetin (Sigma-Aldrich, St. Louis, MO, USA) was used as standard for calibration curve. Total flavonoid content was expressed as mg QE·g−1 fraction.

Sample fractions were added with 0.4 mM of DPPH (Sigma-Aldrich, Steinheim, Germany) solution, 20% methanol, and 0.2 M of 2-(N-morpholino) ethanesulfonic acid (MES) buffer solution, respectively [8]. Next, the sample solution was incubated for 30 min in a dark room and measured using a spectrophotometer at a wavelength of 520 nm. Ascorbic acid was used as a positive control. Antioxidant activity is expressed in percentage of DPPH reduction by calculation: % reduction DPPH = (1 − (X1/X0)) × 100%.
X1: sample absorbance, X0: blank absorbance.

Each sample fractions were added with 50 mM linoleic acid (Aldrich, Buchs, Switzerland) in 99.8% ethanol, and 0.1 M phosphate buffer pH 7.0 [10]. Then, solutions were incubated in a water bath at 40 °C for 7 days. Each sample solution was added with 20% trichloroacetic Acid (TCA) (Sigma-Aldrich, Burlington, MA, USA) solution, and 1% 2-thiobarbituric acid (TBA) (Sigma-Aldrich, Darmstadt, Germany) solution after 7th day of incubation. Subsequently, the sample was heated at 100 °C for 10 min and centrifuged at 3000 rpm for 15 min. Sample was then measured using a spectrophotometer with a wavelength of 532 nm. Antioxidant activity is expressed in percentage of malondialdehyde formation (MDA) by calculation: % reduction MDA = (1 − (X1/X0)) × 100%.
X1: MDA concentration with sample, X0: MDA concentration without sample.

Yeast S. pombe was pre-cultured in YES liquid medium for 18 h at 30 °C. Pre-culture was then transferred to new YES liquid medium at initial OD600 = 0.05 and further used as main culture. Each sample fraction at various concentration was added into each main culture and further be incubated at 30 °C. Concentration of sample fraction used in this assay was based on the IC50 value of DPPH assay including 0.25×, 1×, 4×, 8×, and 12× IC50. Following 7 and 11 days of incubation, each culture was harvested and adjusted to OD600 = 1 using sterile medium. The particular solution was then serially diluted and each dilution suspension was then spot on solid YES medium and incubated for three days at 30 °C. Yeast grown in YES medium with lower glucose concentration (0.3% w/v) was used as positive control or commonly known as calorie restriction treatment [12], while yeast grown in YES medium without sample fraction was designed as a negative control.

Yeast culture was prepared as described previously on yeast viability assay. Yet, only the best concentration of sample fraction was used in this assay. Calorie-restricted yeast culture was used as positive control in addition to 0.1 μg·mL−1 ascorbic acid treatment. Each yeast culture was then serially diluted and each dilution suspension was spot on solid YES medium containing 1.2 and 3 mM H2O2 as oxidative stress treatment [13]. Agar medium was then incubated for three days at 30 °C.

Fission yeast cells were cultured as described previously in oxidative stress response assay. Following 1, 5, 10, and 15 day of incubation, each yeast culture was then serially diluted and spread in solid YES agar medium. Each YES agar was then incubated for 3 days at 30 °C and grown yeast colony was calculated.

Mitochondria activity was assayed by using rhodamine B [14]. Yeast main cultures that have been incubated for 18 h at 30 °C with sample fraction treatment were harvested by centrifugation at 5000 rpm for 1 min. The suspension was rinsed using 0.1 M phosphate buffer pH 7 and subsequently added with 100 nM Rhodamine B (Sigma-Aldrich, St. Louis, MO, USA). After that, fluorescence in correspond to mitochondria activity was observed by using a fluorescence microscope Olympus BX51.

Fraction was prepared as described previously. The LC-MS data were obtained by using UHPLC Vanquish Tandem Q Exactive Plus Orbitrap HRMS (ThermoScientific Waltham, MA, USA). LC separation was done by using Accucore C18, 100 × 2.1 mm, 1.5 µm particle size (ThermoScientific, Waltham, MA, USA). H2O with 0.1% formic acid (A) and acetonitrile with 0.1% formic acid were used as mobile phase. The gradient elution was designed from 0–1 min (5% B), 1–25 min (5–95% B), 25–28 min (95% B), 28–30 min (5%B) and a 0.2 mL·min−1 flow rate. Electrospray ionization (HESI) was used. Each sample was injected once (10 µL) with the ESI, operated in both negative and positive ionization mode. Nitrogen was used as the carrier. The mass spectrometer was operated in full scan mode with a scan range of 500–1500 m/z and automatic data-dependent MS/MS fragmentation scans. Moreover, raw LC-MS data were analyzed by Compound Discoverer 2.1 software (Thermo Fisher Scientific, Waltham, MA, USA). The corresponding software was integrated into the mzCloud and ChemSpider for matching fragmentation spectra and compounds.

Based on CLS assay, FEB with a concentration of 8 μ μg·mL−1 could maintain the chronological age of yeast cells up to day 20 compared to negative controls. However, the FEB treatment was not better than the positive control and 0.1 μg·mL−1 ascorbic acid (Figure 2). A decrease in glucose content (calorie restriction) from 3% to 0.3% in S. pombe grown on synthetic defined (SD) medium can increase the chronological age up to 23 days [15].

The selected concentration of sample fractions, especially FEB promoted cells survival against H2O2-induced oxidative stress. Yeast cells treated with ethanol-based fractions (FEB and FEL) could grow well under 3 mM H2O2 oxidative stress on day 11 (Figure 3 and Figure 4), whilst n-hexane-fraction could not promote yeast viability as compared to the ethanol-derived fractions.

As expected, treatment of FEB and FEL could induce mitochondria activity as shown by fluorescence assay (Figure 5). Similar results were shown in the ascorbic acid and calorie restriction treatments as favorable control treatments. In contrast, no fluorescence was observed in negative control. Yeast cells were not seen to glow in the negative control.

Based on CLS assay, FEB showed strong antiaging activity than other fractions. Indeed, cell cycle analysis revealed that FEB could cause cell cycle delay in S.pombe. For instance, FEB treatment can suppress the growth rate of cells from the G1 phase to the next phase, the S and G2 phases. FEB is thought to have an antiaging activity that prevents cells from aging more quickly into the G2 phase and maintains cells longer in the G1 phase (Figure 6).

As FEB showed the strongest antiaging potential, thus we further analyzed the chemical content of this particular fraction. Based on LC-MS data, FEB was found to have gallic acid (C7H6O5) (m/z 169.0) and (15Z)-9,12,13-Trihydroxy-15-octadecenoic acid at higher concentrations (C18H34O5) (m/z 329.2) than other compounds (Figure 7).

This research was funded by the Deputy for Strengthening Research and Development, Ministry of Research and Technology, and the National Research and Innovation Agency Indonesia through the “Basic Research Scheme” to R.I.A., grant number: 1/E1/KP.PTNBH/2021.

All the data presented or analyzed during this study are included in the article.

The authors thank Indonesian Medicinal and Aromatic Crops Research Institute (IMACRI), Ministry of Agriculture of The Republic of Indonesia, for providing the bud and leaf of clove, used in this study. In addition, the authors are grateful to the Advanced Laboratory of IPB University for facilitating flow cytometry analysis. 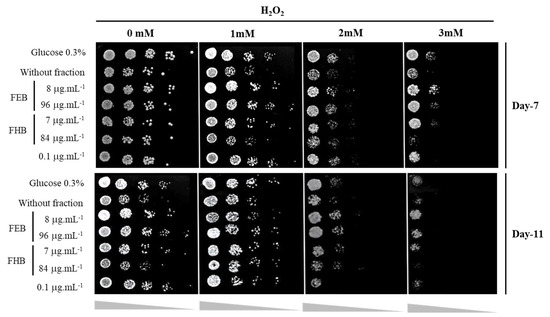 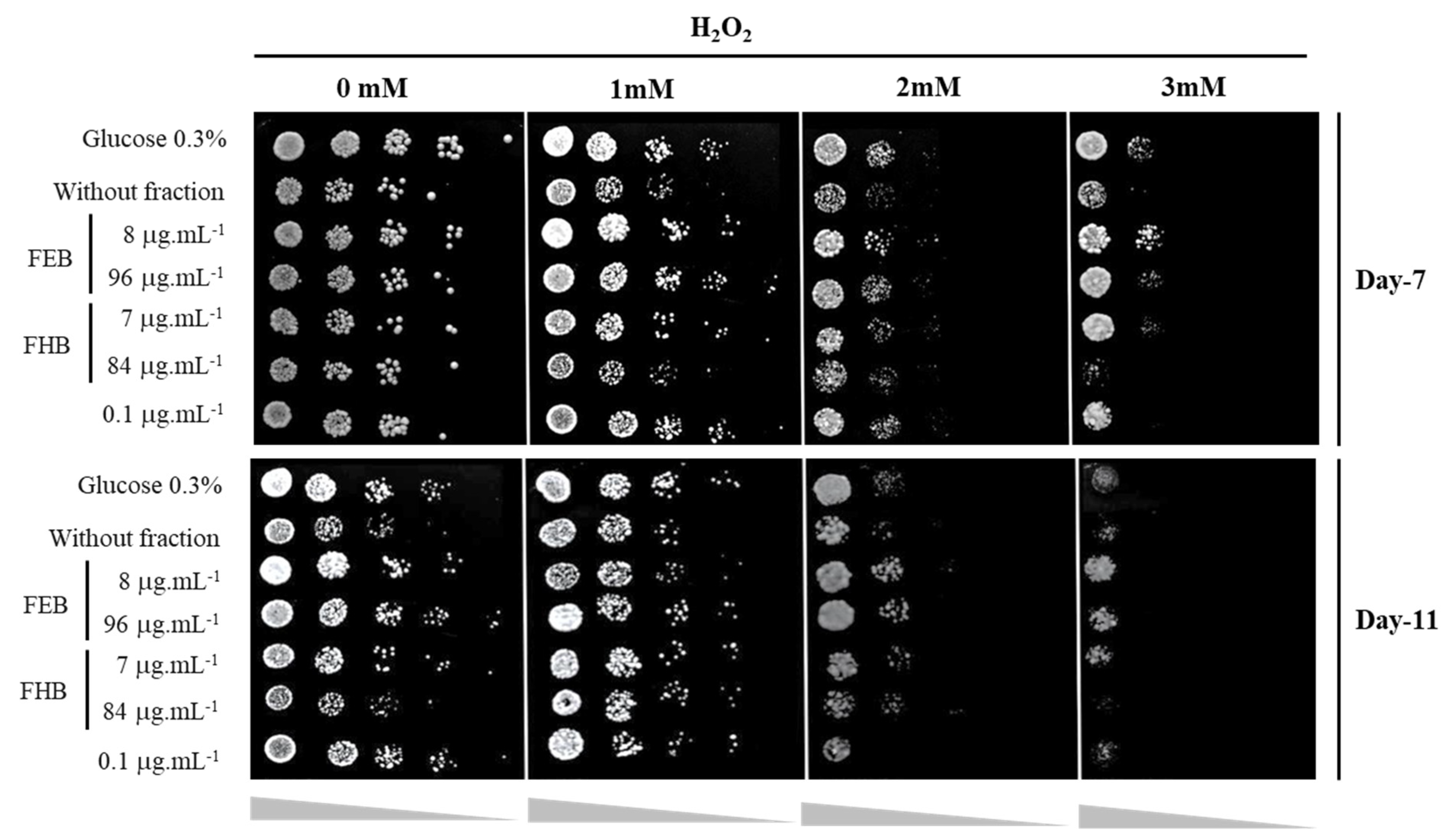 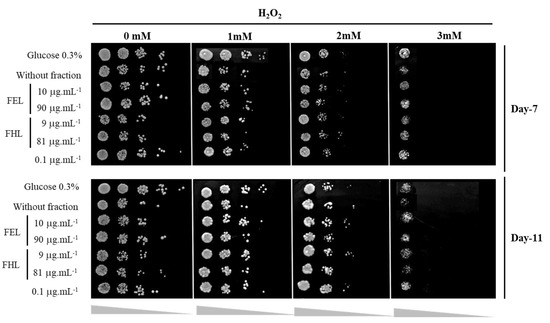 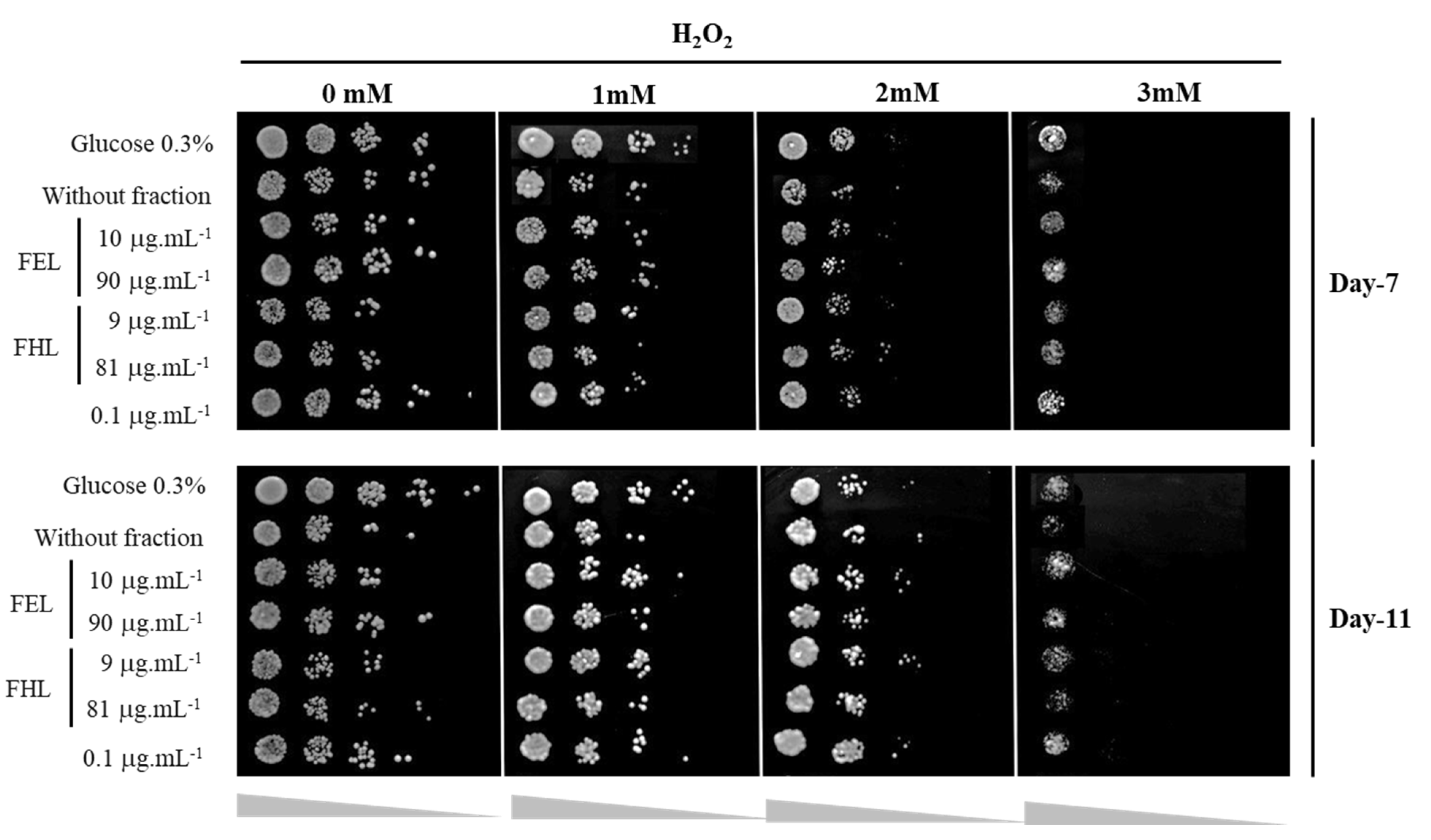 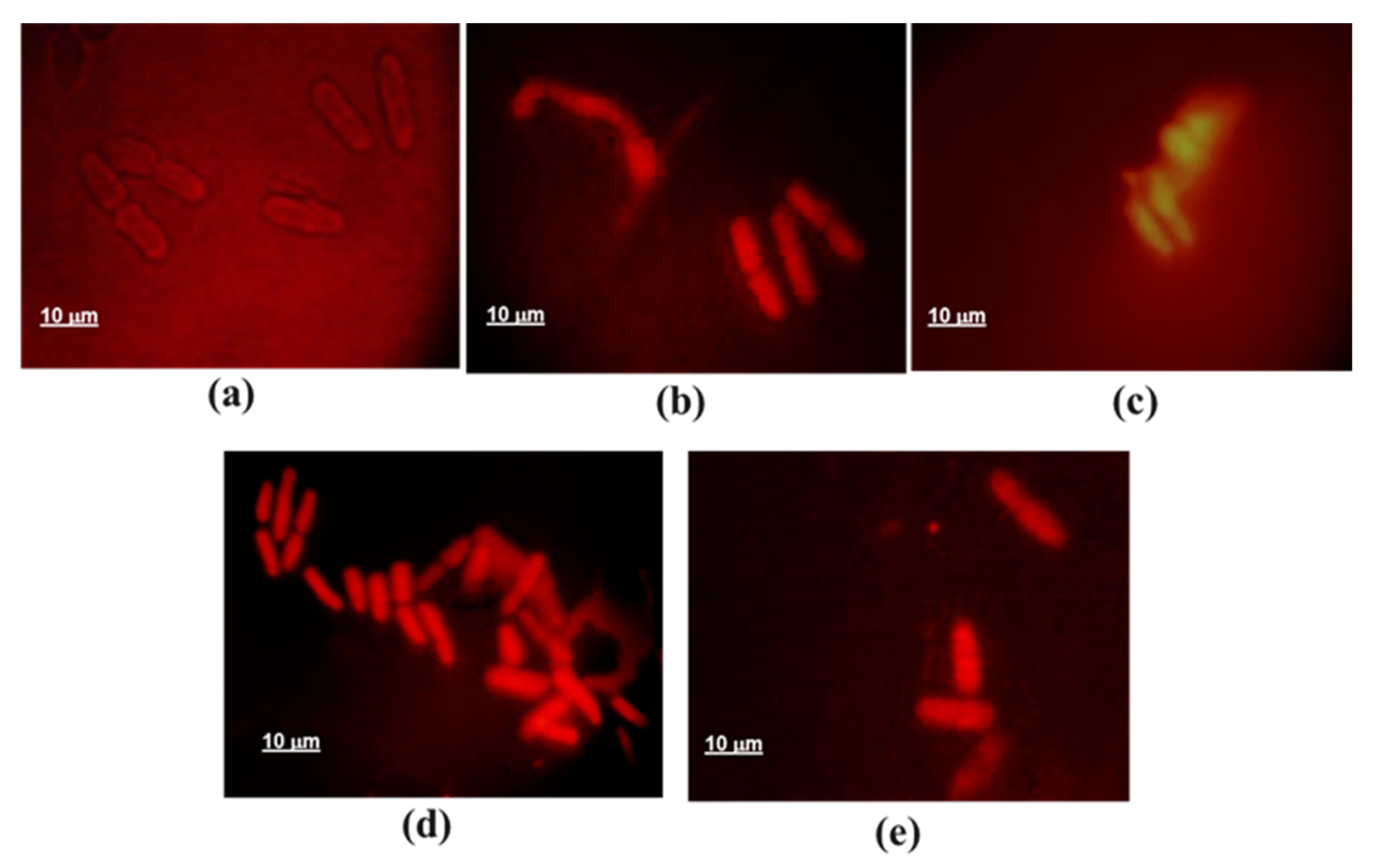 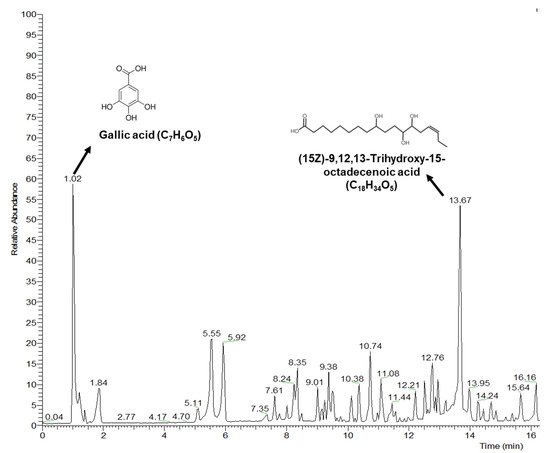