Reactive oxygen species (ROS) are related to several degenerative diseases. In this study, Acacia, a genus with many fast-growing species, was investigated to explore the many phytochemical compounds that are biologically active in processes dealing with ROS-related diseases. This study aimed to select extracts of Acacia heartwood on the basis of their pharmacological and phytochemical profiles and identify their bioactive compounds. Five methanolic extracts from Acacia heartwood were evaluated for their antioxidant activity using three different in vitro assays: toxicity toward Artemia salina and phenolic and polyphenolic content. Multivariate analysis was conducted to select two promising extracts and then their bioactive compounds were identified using liquid chromatography coupled with mass spectrometry. Acacia crassicarpa extracts showed the highest antioxidant activity, as well as phenolic and hydrolyzable tannin contents, but low toxicity. The A. mangium extract exhibited high flavonoid and condensed tannin content, whereas A. decurrrens had the highest toxicity with low antioxidant activity. Pearson’s correlation analysis demonstrated no correlation between antioxidant activity and toxicity. Moreover, the phytochemical profile exhibited an association with pharmacological parameters. Principal component analysis followed by cluster analysis divided the extracts into three clusters. Two heartwood extracts of A. crassicarpa and A. auriculiformis were chosen as the best extracts. Identification showed that these extracts were dominated by phenolic compounds, as well as anthraquinone and xanthone. View Full-Text
Keywords: Acacia; antioxidant; toxicity; phytochemical profile; multivariate analysis Acacia; antioxidant; toxicity; phytochemical profile; multivariate analysis
►▼ Show Figures 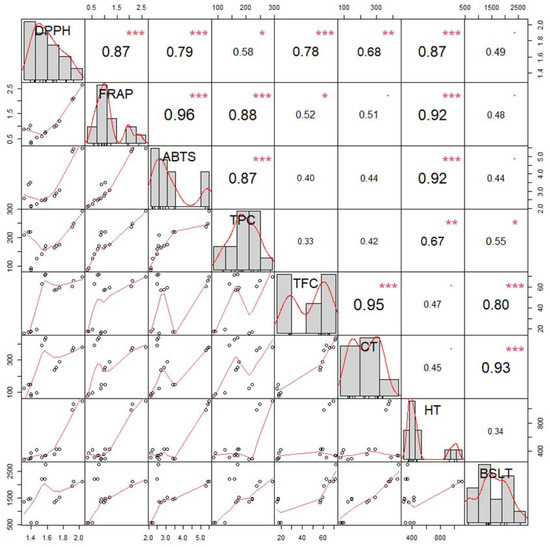