2.1. Fault Injection in the Development Process

The fault injection methods that can be used during the software development steps are largely divided into fault injection implemented by hardware and fault injection implemented by software (software-implemented fault injection, SWIFI).
The hardware-implemented fault injection methods use hardware characteristics to generate faults [6]. Principal hardware fault injection tools (FITs) include GOOFI-2 [7] and RIFLE [8]. Fault injection is also possible through a hardware probe such as TRACE32. However, these tools are expensive because they inject faults using separate hardware devices and are more appropriate for hardware or system development steps than for software development.
SWIFI is a cost-effective method of running software codes injected with faults, because unlike hardware-implemented fault injection, it does not require a separate device. SWIFI methods in AUTOSAR-based automotive software can largely be classified into three types: directly modifying the software source code, using AUTOSAR’s hook function, and using a wrapper for the fault injection target function.
Directly modifying the source code entails directly modifying the execution of the binary code such that faults will be triggered when the corresponding code is executed [9]. This method accurately injects faults at the position desired by the tester, but the execution flow may become different than that of the original code because the source code has been changed. As automotive software is sensitive to execution timing, the code may operate differently from the original intention when the timing is changed by the modified code.
The hook function of AUTOSAR [10] acts by inserting tracking codes such as pre-task, post-task, and error hooks in the functions defined in the AUTOSAR standard for the purposes of execution monitoring or fault injection. This method works well if the functions defined in the standard are used, but applying it in varied contexts is challenging because the hook function can vary depending on the degree of implementation of the OS in accordance with the AUTOSAR standard.
Using a wrapper in the fault injection target function [11,12] creates wrapper components in line with various AUTOSAR hierarchical structures and injects faults while monitoring the execution of the original components. Most SWIFIs inject faults using a wrapper [13]. This method can inject various faults, such as in the parameters, return values, and function calls of the fault injection target function, but it is difficult to implement because it only uses software without the help of a hardware debugger.

Before performing a fault injection test, the faults that should be injected must be defined. AUTOSAR defines five error types that can occur in automotive software: data, program flow, access, timing, and asymmetric errors [6]. A data error is caused by invalid values of messages exchanged between function parameters, variables, and/or components. For instance, the sudden unintended acceleration of Toyota vehicles, which was caused by a change in the data stored in the shared memory to an invalid value, corresponds to a data error [14]. A program flow error involves the execution of a program differently than what is expected due to omitted, invalid, or unnecessary operations. An access error occurs when software attempts to accesses resources for which it does not have permission. A timing error involves early or late delivery or omission of messages between components. An asymmetric error is a fault that delivers conflicting messages when multiple software components simultaneously receive a message. Tools that support the injection of these automotive software faults include Kayotee [9], CaNoe [10], G-SWFIT [11], and GRINDER [12].
Kayotee is a FIT that directly modifies source codes and can inject a data error fault that changes the value of a variable. However, other types of fault injection are not supported. A CaNoe-based FIT uses the hook function provided by AUTOSAR and can inject data errors by intercepting and changing the signals or messages in communication with external ECUs. However, the fault types that can be injected are limited because the FIT cannot directly change the parameter or return value of the function that is currently tracking for fault injection.
G-SWFIT and GRINDER are tools that inject faults using a wrapper. Unlike CaNoe, which uses the AUTOSAR hook function, a wrapper can be used to inject faults in the parameter or return value of the fault injection target function or the function call itself. Depending on how the wrapper is implemented, wrapper-based methods can perform fault injection for all five types of errors that can occur in automotive software. G-SWFIT and GRINDER can perform fault injection for some types of data and program flow errors. They can inject invalid values in the variables used in software or inject faults in the related parameter or function itself when a function call occurs.
As described above, most automotive software FITs focus on data errors. The method we propose can perform fault injection not just for data errors but for all five error types that can occur in AUTOSAR-based applications.

To inject faults into AUTOSAR-based automotive software, we first need to understand the AUTOSAR platform. AUTOSAR is defined by the standard architecture for productivity improvement in automotive electronics-embedded software development, as shown in Figure 2.
The software architecture defined in AUTOSAR is essentially composed of application software (ASW), a runtime environment (RTE), BSW, and a microcontroller abstraction layer (MCAL). The RTE layer of the virtual functional bus concept exists for development productivity improvement, and various SWCs are installed on top of this layer, in the ASW layer. Runnables are functions used to implement functions inside SWCs and to call each other. However, SWCs are implemented using different methods. For this reason, direct calls between different SWCs do not occur and SWCs instead communicate with other SWCs through the RTE layer. The OS and the software that provides services such as memory communication are installed in the BSW layer. Drivers related to the hardware device control are installed in the MCAL layer. In general, the calls between the layers of AUTOSAR occur between adjacent layers, but in order to maximize software performance, an SWC may call the BSW directly without passing through the RTE layer.
The calling relationships that can occur in the AUTOSAR-based automotive software can be classified as follows:

As mentioned in Section 2.3, there are five error types that can occur in AUTOSAR-based automotive software: data, program flow, access, timing, and asymmetric errors [18]. Accordingly, we analyzed the causes of errors, derived the fault types, and listed them in Table 1.

We redefined automotive software faults as based on the AUTOSAR interface by applying the fault types presented in Section 3.3 to each of the fault injection positions derived in Section 3.2. The data error type is applied to the global variable, function parameter, and return value. Program flow and timing errors are applied to the calling statement of the caller function and the return statement of the callee function. Access errors are only applied to the global variables shared in the calling relationships. Asymmetric errors are applied to return values when the design considered redundancy for fault tolerance. The details are outlined in Table 2.

4.1. Extraction of a Fault Injection Position

For the fault types that we defined, we compared the options of injecting faults in the automotive software using ASFIT versus using the existing fault injection method.

The purpose of this experiment is to demonstrate the superior performance of our method by comparing how well the faults defined in Table 2 are supported by the existing fault injection methods and the proposed method. As shown in Table 4, fault injection methods using hardware [19,20,21] and using SWIFI [9,10,11,12], as mentioned in Section 2.2, were selected for comparison.
The software faults that can occur also differ according to the characteristics of the ECU. Therefore, various ECUs were used to inject all the automotive software fault types defined in Table 2. As shown in Figure 7, the ECUs used in this experiment were a wiper control system, which is a body control module for vehicle interior convenience facility control; an electronic steering column lock (ESCL) control system, which acts as a smart key control; and a vehicle control unit (VCU), which is a vehicle driving system based on a mobile open platform for experimental development of cyber-physical systems.

The software faults that can be injected by each fault injection mechanism are listed in Table 5. The proposed ASFIT can inject all 54 faults, but other methods can inject only 12 to 42 faults.

Real-time performance is critical for automotive software. Although injecting all the software faults listed in Table 2 is important, measuring the performance, specifically, the runtime overhead, is also crucial. As such, when the task execution is delayed by fault injection, it can also cause a side effect aside from the injected fault. 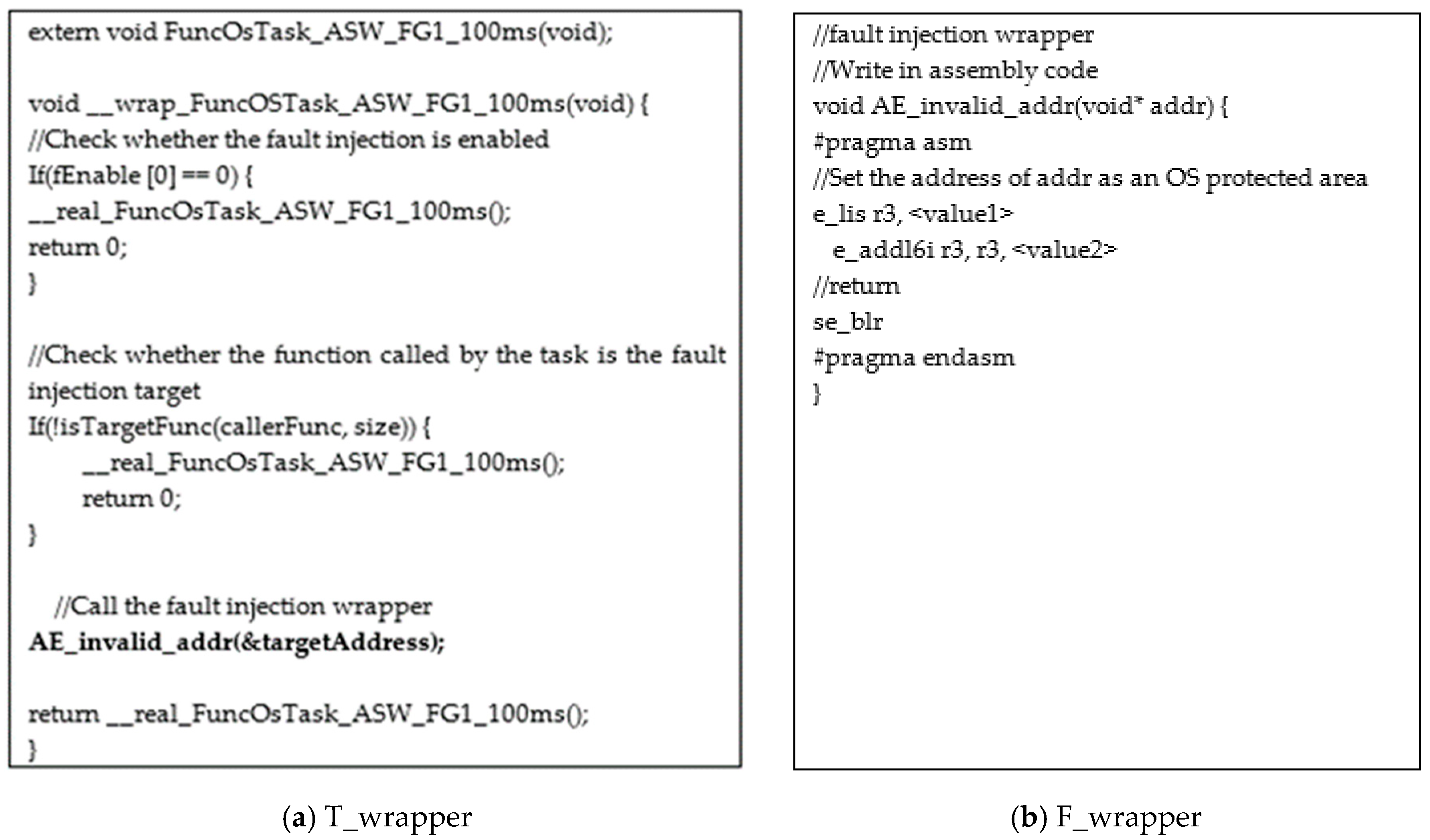 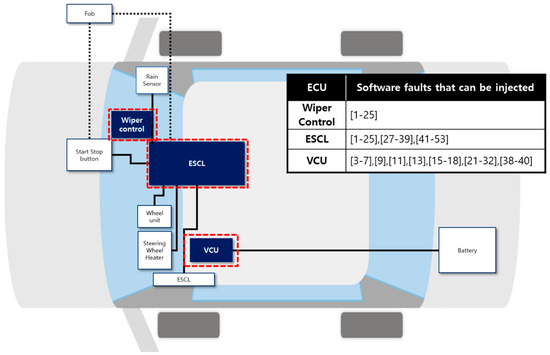 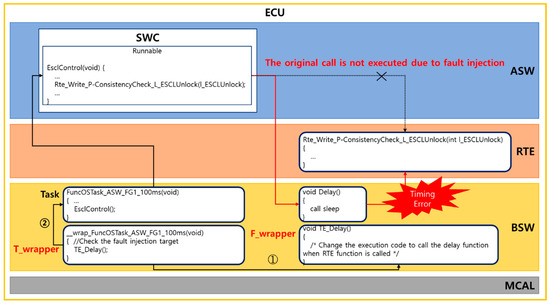 Table 5. Software faults that can be injected.
Table 5. Software faults that can be injected.
© 2020 by the authors. Licensee MDPI, Basel, Switzerland. This article is an open access article distributed under the terms and conditions of the Creative Commons Attribution (CC BY) license (http://creativecommons.org/licenses/by/4.0/).
We use cookies on our website to ensure you get the best experience. Read more about our cookies here.
Accept
We have just recently launched a new version of our website. Help us to further improve by taking part in this short 5 minute survey here. here.
Never show this again