Photovoltaic Degradation Rate Affected by Different Weather Conditions: A Case Study Based on PV Systems in the UK and Australia
Previous Article in Special Issue

2. Definitions and Computations of Correlation Coefficients

First, the MIMO signal model is defined in this section for the following discussions. Figure 2 shows the MIMO signal model considered in this paper; and are the numbers of transmitting and receiving antennas, respectively. is the channel matrix, which is defined as, where is the complex transfer function linking the l-th transmitting antenna to the k-th receiving antenna. The signal model for such a MIMO system is expressed as where is a column vector expressed as ( represents transposition of vector or matrix). Each of its entries represents the signal transmitted by each antenna element. is the received signal vector expressed as , and is the noise vector expressed as . All of the elements of and are independently distributed Gaussian random variables with zero mean. Note that ‘uncorrelated’ does not mean ‘independent’.

This section discusses the definition of channel correlation. The channel correlation can be directly computed from the MIMO channel matrix. The signal defined by (2) is substituted into Equation (4), which is rewritten as where is an identity matrix, and the signal and noise correlation matrices are respectively. Note that and are the average transmitted power per antenna and average noise power on each receiving antenna, respectively. The reason why and become scalar multiples of identity matrices is because all signal and noise components are independent and uncorrelated. From Equation (8), is defined as the channel correlation matrix; it has entries. explains the instantaneous correlation characteristics at the receiver side, and moreover that of the transmitter side is defined as due to the reciprocity of the channel. By using and , the instantaneous correlation coefficients are calculated in the same manner as the received signal correlation. The important characteristic of the instantaneous correlation coefficient is that is asymptotic to if the signal-to-noise ratio is sufficiently high.

The discussion above assumes the channel matrix is always constant. That is, the transmitting/receiving antenna is set at a certain position, and the propagation environment is completely static during the observation. However, the channel information for a particular pair of transmitter and receiver antenna locations does not always yield the representative characteristics of the place because the instantaneously observed channel may have extraordinary characteristics due to multipath fading.
The fading correlation considers the representative characteristics of the environment. Figure 3 shows the concept of a method for obtaining the fading correlation characteristics. A MIMO channel is observed while moving an antenna array in the range defined as the area in which the distribution of incoming waves does not change. This aims to exclude fading variation in the environment in which the antenna is placed. However, if the antenna is moved too much, the number of incoming waves may vary due to shadowing, etc. Therefore, it is desirable that the range in which the antenna is moved be limited to just a couple of wavelengths.
The fading correlation matrix is defined by
The correlation coefficients corresponding to Equations (11) and () are calculated by (between the m-th and n-th receiving antennas), (between the p-th and q-th transmitting antennas), respectively.

Section 2.5 explained the evaluation method of the correlation coefficient using the complex patterns. 2D radiation patterns have been generally used to evaluate the antenna efficiency or directivity, but most cases have used amplitude patterns (for example, [21,22,23]). If 2D complex patterns can be quickly measured, it becomes easy to evaluate the performance of a MIMO antenna. However, measuring a full 2D pattern normally incurs a significant measurement time or equipment costs.
Fortunately, S-parameters are much easier to measure than the radiation patterns [9,14]. The S-parameter matrix contains only reflection and mutual coupling information while it does not directly represent radiation properties. Nevertheless, the pattern correlations can be calculated from just the S-parameter matrix conditionally [8]. However, the radiation efficiency excluding reflection and mutual coupling losses must be close to 100%, that is, the Joule heat loss must be almost 0.
We now assume an antenna array whose S-parameter matrix is as shown in Figure 5. The signal, , incidents the feed ports of the antenna array. The reflected signal vector is expressed as . When the complex pattern of the m-th antenna element is expressed as , the observed field generated by this antenna array at a sufficiently distant point is expressed as where is the characteristic impedance of vacuum and r is the distance between the observation and reference points. By using (16), the total radiated power is expressed as
By substituting (15) into (17), the total radiated power is given by
Meanwhile, if the antenna is lossless (no dielectric loss and no conductor loss), the total radiated power should agree with the total input power, which is defined by the incident power minus reflected power. This relation is represented by
Comparing (18) to (19) yields the interesting relation,
This indicates that the correlation characteristics can be calculated from the S-parameter matrix only when the antenna array is lossless. In the following, the S-parameter based correlation matrix is expressed by to distinguish it from the complex pattern correlation matrix, . The complex correlation coefficient between the p-th and q-th antenna elements is calculated as where represents the p-th row and q-th column entry of and represents the p-th row and q-th column entry of .

2.7. Summary of the Various Kinds of Correlation Definitions

Two kinds of antenna arrays are dealt with in this paper, and the correlation coefficient is varied by changing the element spacing. Figure 7 shows the antenna models. Here, (a) is a half-wavelength dipole array and (b) is a square microstrip antenna array (MSAA); both are linear arrays with element intervals of d in the H-plane. The size of the conductor-backed dielectric substrate of (b) is determined so that the distance between the substrate edge and the center of each antenna element is 0.5 wavelengths. The thickness of the dielectric substrate was 1.6 mm, the relative dielectric constant was 4.2, and the dielectric loss tangent was 0.02. Both the dipole and MSAA had an operating frequency of 2.4 GHz. The moment-method based simulator (HyperLynx 3D EM) was used.
Figure 8 is a conceptual diagram of the model used to compute the propagation channel. This is a geometry-based stochastic channel model (GSCM) [7], and well explains the physical path distributions around the antennas. The scatterers are arranged sufficiently far from each antenna. Each entry of the MIMO channel matrix is yielded by the sum of all element paths from one of the transmitting antennas to one of the receiving antennas. In this simulation, the statistical conditions of the environment are identical for both transmitting and receiving sides. The number of the scatterers is set to 100 for each side, and the distribution of the scatterers are set to 3D uniform. The propagation channel is generated 1000 times for each antenna condition, where identical antenna arrays are used for both sides. The GSCM model is used only to calculate the fading correlation matrix. This is because both the complex pattern and S-parameter-based correlation matrices are determined by the antenna characteristics only, while the fading correlation matrix needs the propagation channel.

In this paper, the current definitions of the correlation coefficient of MIMO antennas have been explained. Numerical calculations were introduced to examine the effect of element spacing and type on the accuracy of the correlation coefficients. In particular, a numerical analysis of the 2-element dipole array showed that the S-parameter-based correlation yields an error greater than 10% if the radiation efficiency is lower than 97%, and this means that most of the practical compact antennas cannot be evaluated by using the S-parameter-based correlation approach. 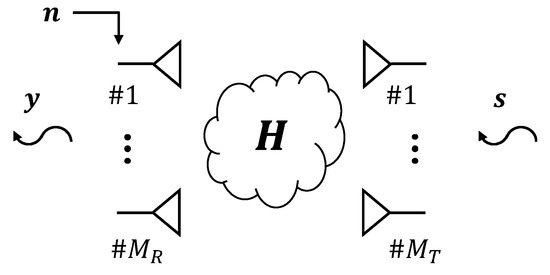 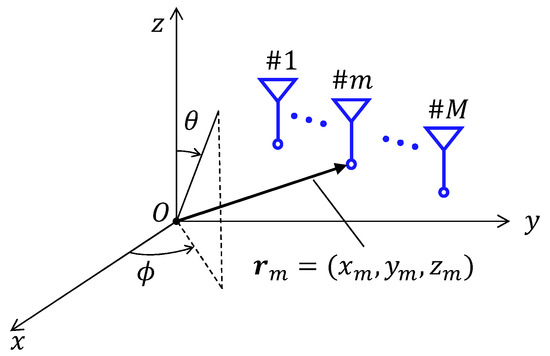 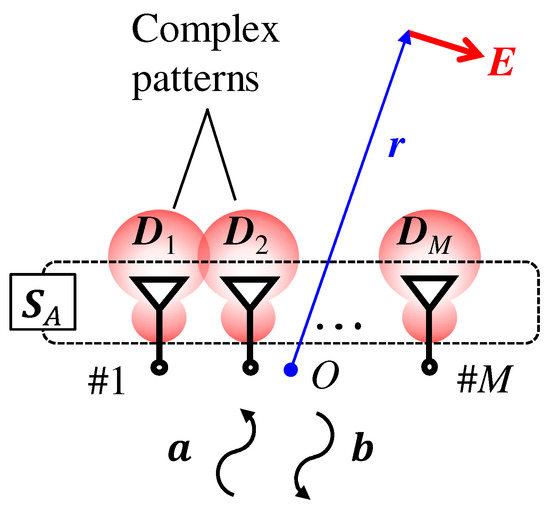 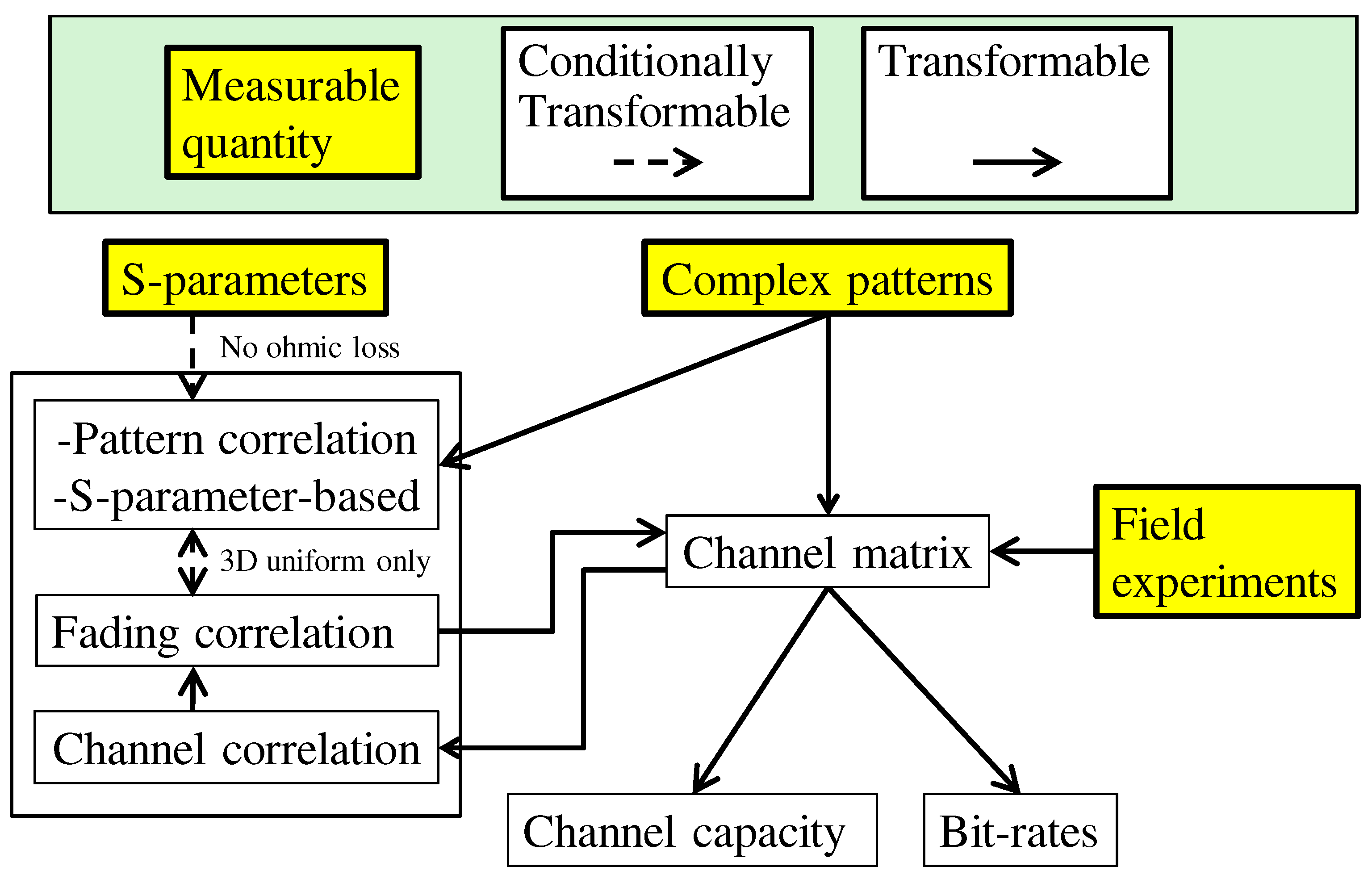 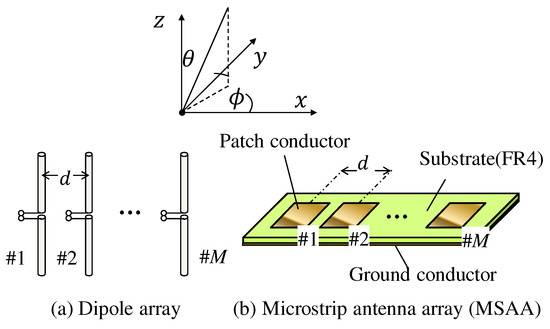 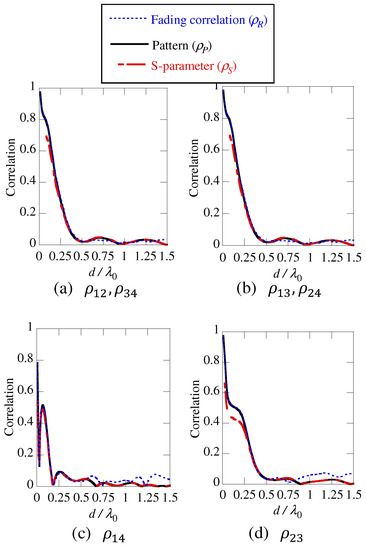 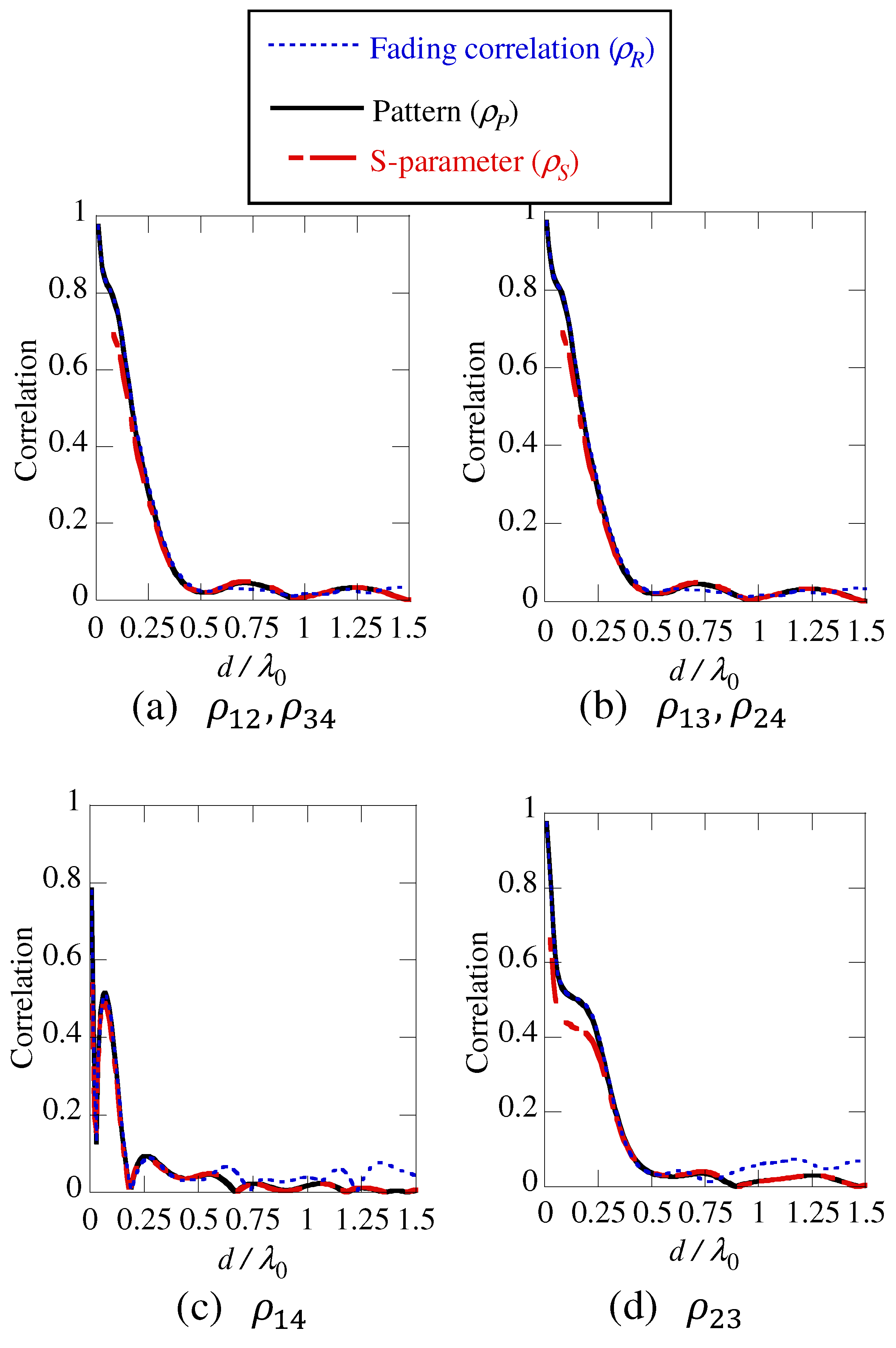 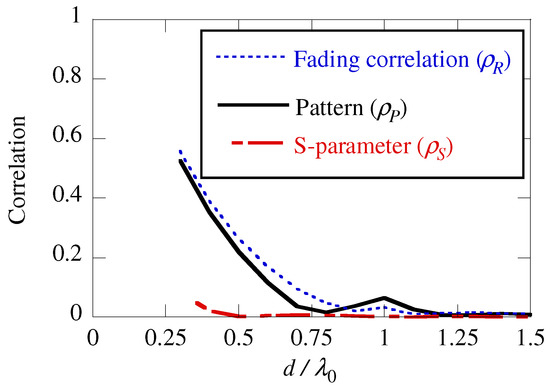 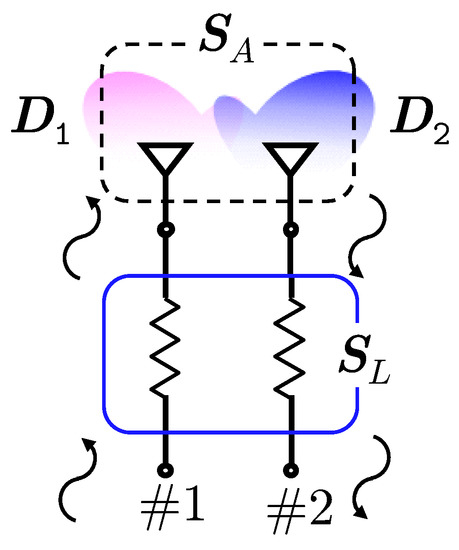 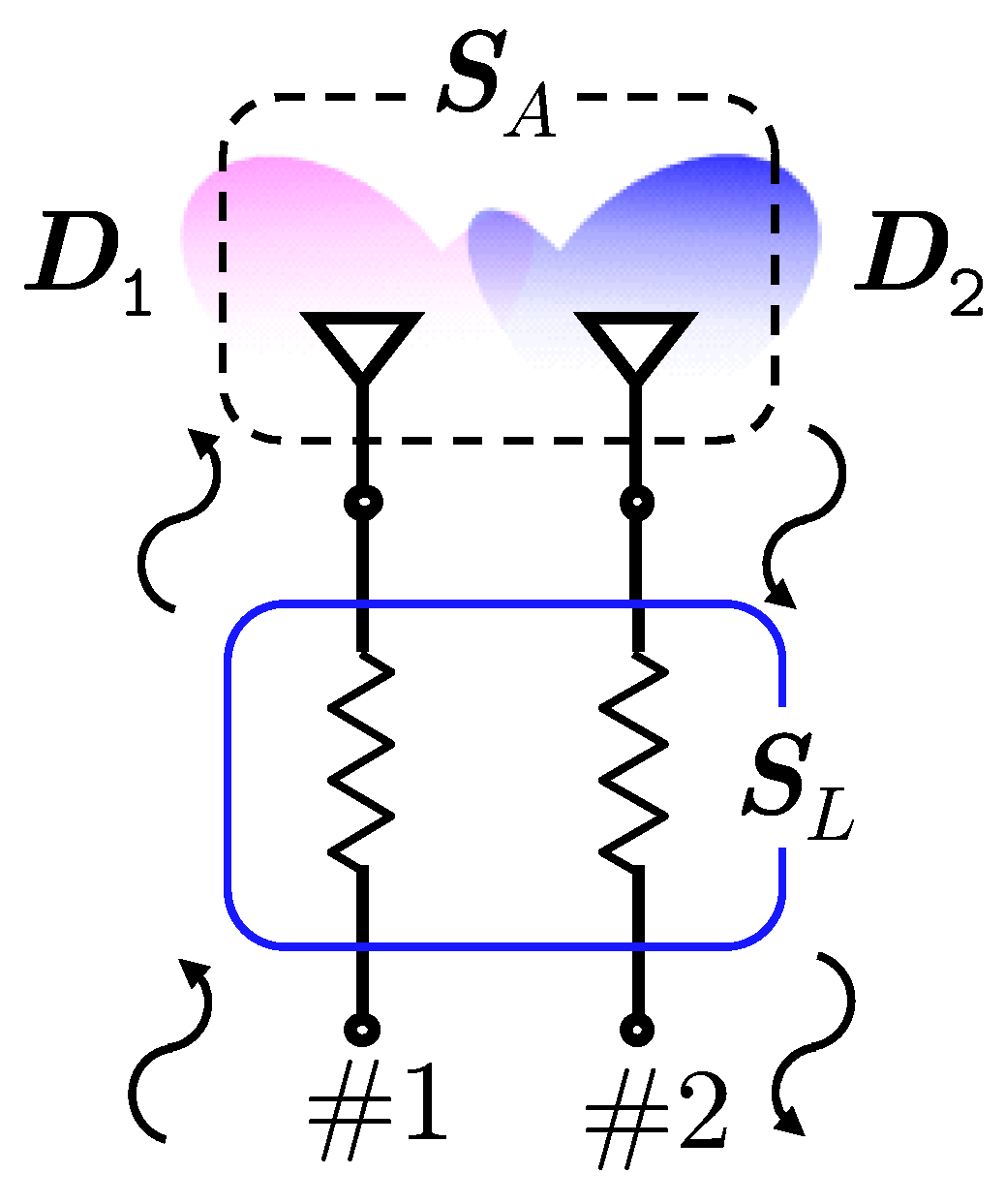 Table 1. Definitions of the correlation matrices.
Table 1. Definitions of the correlation matrices.
© 2020 by the authors. Licensee MDPI, Basel, Switzerland. This article is an open access article distributed under the terms and conditions of the Creative Commons Attribution (CC BY) license (http://creativecommons.org/licenses/by/4.0/).
We use cookies on our website to ensure you get the best experience. Read more about our cookies here.
Accept
We have just recently launched a new version of our website. Help us to further improve by taking part in this short 5 minute survey here. here.
Never show this again