Nonlinear Voltage Control for Three-Phase DC-AC Converters in Hybrid Systems: An Application of the PI-PBC Method
Previous Article in Journal

Wind energy is a clean energy, the use of which can avoid 5.6 billion tons of CO2 by 2050, equivalent to the yearly emissions of the 80 most polluting cities in the world, home to around 720 million people [1]. This would help to save up to four million lives annually by 2030 by reducing pollution, because one in eight deaths in the world is linked to air pollution [1].
The total worldwide wind power capacity in 2015 was 432.9 GW, which is a summative market growth of more than 17% [2,3,4]. By 2030, wind power could exceed 2110 GW and supply up to 20% of worldwide power demands [4].

Therefore, based on the above discussion, a BSS for a SCIG-based WF is proposed in this paper to enhance the LVRT capability during transient periods and to damp frequency oscillations during steady-state periods. A suitable PI controller-based cascaded control approach is constructed to guarantee the stable operation of the power system. The proposed control strategy also incorporates droop gain and frequency signals to provide an effective amount of real power from the BSS which will ensure smaller frequency fluctuations. Detailed design procedures and control strategies are adequately presented in this paper.
The transient and steady-state responses of the entire power system including IEEE nine-bus system, WF with BSS is compared with that of SCIG without BSS. Actual wind speed values of Hokkaido Island, Japan are considered for steady-state analysis.
The simulation results clearly indicate that the proposed strategy can confirm the LVRT capability of WFs, and damp the frequency fluctuations of a hybrid power grid.
The paper is structured in six sections. Section 1 presented the introduction, motivation behind this work, literature reviews, and contribution. Section 2 and Section 3 present the model of a hybrid power system and an aerodynamic model of wind turbine. Section 4 describes the proposed BSS along with its control strategy. The simulation results and analysis are presented in Section 5. Finally, Section 6 concludes the paper with a brief summary.

2. Model of a Hybrid Power System

The hybrid power system model presented in Figure 1 is used for transient and steady-state analysis. It has a WF and IEEE nine-bus main model. Basically, three different conventional synchronous generators (SGs) are used for the main system. The ratings of the SGs are 150 MVA (SG1), 250 MVA (SG2), and 200 MVA (SG3).
An AC4A-type exciter model is used for all SGs as shown in Figure 2 [19]. The thermal-based power station as depicted in Figure 3 is considered for SG1 and SG2, and the hydro-based power station is considered for SG3 as illustrated in Figure 4 [19].
Here, the FSWT-SCIG is linked to the main system at Bus 5 through 0.69 kV/66 kV, 66 kV/230 kV transformers and a dual transmission line. It has one SCIG (rated capacity: 100 MW) as shown in Figure 1. The reactive power is delivered to the SCIG using a capacitor bank during steady-state periods. Additionally, the BSS is connected next to the capacitor bank. The capacity of the BSS is 30 MVA. The frequency is 50 Hz and the base power of the power system is 100 MVA. The governor systems of SG1 and SG3 are controlled by an integral control to ensure automatic generation control (AGC) as depicted in Figure 5 [19]. The parameters of the SGs and SCIGs are presented in the Appendix.

3. Model of a Wind Turbine

The expression of the wind turbine’s mechanical power can be written as follows [20]:
Here, Pw = captured wind power, R = rotor blade radius (m), Cp = power coefficient, ρ = air density (kg/m3), and Vw = wind speed (m/s).
The expression Cp can be written as follows [21]:
Here, β = pitch angle (deg), ωr = wind turbine rotor speed (rad/s), c1 to c6 = wind turbine characteristic coefficients [21], and λ = tip speed ratio.
Figure 6 presents the characteristics curve of Cp vs. λ. The curve is found for a different β from Equation (2). From the graph, the optimum λ (λopt) = 8.1 and the optimum Cp (Cpopt) = 0.48. Figure 7 shows the model for the blade pitch control system of FSWT [22]. In FSWT, the pitch controller is used to control the real power output of the SCIG when it exceeds the rated power.

The BSS model which is used in this work is presented in Figure 8. It consists of a lead–acid battery unit, a voltage source converter (VSC) based on pulse width modulation (PWM), and a step-up transformer. For simplicity, the battery is symbolized using a constant DC voltage source. The DC voltage is transformed to grid-synchronized three-phase AC voltage using VSC.
The proposed control technique of the BSS is depicted in Figure 9. The different error signals are compensated using a cascaded control technique based on four PI controllers. The upper portion of the proposed control system controls the real power injected to the power grid system by adjusting the d-axis current (Id), whereas the lower portion is controlling the reactive power injected to the power system by adjusting the q-axis current (Iq). Additionally, in the upper portion the frequency of the grid system (fsys) is taken as feedback. Depending upon the frequency deviation, the upper controller portion will minimize the frequency fluctuations by injecting effective amounts of real power from the BSS during steady-state conditions. The trial and error technique is applied to choose the droop gain (Kp) which ensures optimized results.
In the lower portion, the r.m.s voltage (V) of the grid system is taken as feedback. During transient conditions (e.g., fault conditions), the lower controller portion will inject effective amounts of reactive power until the terminal voltage reaches its pre-fault value.
Finally, the reference voltages (Va*, Vb*, and Vc*) are compared with a high-frequency triangular carrier wave to get the gate drive pulses of the VSC. In this way, the LVRT’s capability and minimization of frequency fluctuations can be ensured.

As shown in Figure 1, the triple-line-to-ground (3LG) fault is considered as a network disturbance near Bus 11 at one of the double circuit transmission lines. The fault conditions are presented in Figure 10. The wind speed data applied to the FSWT-SCIG are sustained constantly at 12 m/s based on the supposition that the wind speed does not change often within this short period.
Figure 11 presents the reactive power response of BSS (Case 2), which indicates that it can provide an effective amount of reactive power to the SCIG during transient periods as depicted in Figure 12. Due to this effective injection of reactive power from the BSS, the terminal voltage of the SCIG goes back to the nominal value more quickly in Case 2, whereas it fails in Case 1, as shown in Figure 13. As the terminal voltage does not reach 90% of the nominal value within 1.5 s based on standard grid code [23], it is disconnected from the main power grid by opening the circuit breaker (CB) at 2.0 s. The rotor speed response of the SCIG, as shown in Figure 14, is unstable in Case 1 but is stable in Case 2 after the fault. This is because the SCIG requires more reactive power during transient periods than steady-state periods to improve the air gap flux. If enough reactive power is not provided, the developed electromagnetic torque of the SCIG declines considerably. Thus, the SCIG’s rotor speed increases considerably in Case 1 and makes the whole system unstable. On the other hand, in Case 2 the SCIG gets enough reactive power from the BSS during a network disturbance situation, and therefore its rotor speed response is stable. The real power output of the SCIG is shown in Figure 15. The real power output goes back to the nominal value more effectively in Case 2 than Case 1. Finally, the rotor speed responses of conventional SGs are presented in Figure 16. The rotor speed of SGs are more stable in Case 2 than Case 1. Thus, from the above analysis it is clear that the LVRT capability can be improved by incorporating the proposed BSS.

The actual wind speed value of Hokkaido Island, Japan is taken in this steady-state analysis as depicted in Figure 17. The total computational time is considered as 70 s.
Figure 18 shows the real power profile of SCIG-based WFs. The responses are identical for both cases, because no control system is involved in the SCIG. Additionally, the real power output is fluctuating because of the variable wind speed data.
The BSS real power profile for Case 2 is presented in Figure 19. From the figure, it is clear that the BSS can ensure an effective amount of real power based on the frequency fluctuations. Thus, the frequency variation is smaller in Case 2 compared to Case 1, as depicted in Figure 20, which validates the importance of the proposed BSS. Figure 21 shows the real power profiles of conventional power plants (SGs). The real power outputs of SGs are fluctuating because of the variable outputs of SCIGs. In addition, there is small variance between the Case 1 and Case 2 responses. This is because BSS is providing and taking real power to and from the grid system, based upon frequency variations.
Finally, Figure 22 presents the mechanical power output of FSWT. The responses are identical for both cases, as no control system is involved in FSWT-SCIGs.
Table 1 shows the +Δf, -Δf, and σ for both cases, which are calculated from Figure 20. The +Δf, -Δf, and σ are smaller in Case 2 compared to Case 1.

To augment LVRT aptitude and minimize the frequency oscillations of a hybrid power system during transient and steady-state periods, a novel BSS-based FSWT-SCIG is proposed in this paper. Detailed design procedures of the proposed BSS, WFs, and hybrid power systems are explained adequately. The BSS can provide real and reactive power during steady-state and transient periods, respectively. The proposed BSS is composed of both LVRT enhancement techniques and frequency control algorithms. Different case studies are executed to show the usefulness of the proposed BSS. The LVRT characteristic is determined with respect to the standard grid code, taking a 3LG fault. Steady-state performance is tested using the actual wind speed data of Hokkaido Island, Japan. The simulation results clearly indicate that the LVRT aptitude can be improved, and frequency oscillations can be minimized effectively, by using the proposed BSS. Therefore, this proposed control technique has an encouraging prospective value.
As future work, the variable droop controller techniques of BSS with FSWT-SCIGs will be a strong candidate.

The parameters of conventional SGs and SCIGs are depicted in Table A1 and Table A2, respectively. 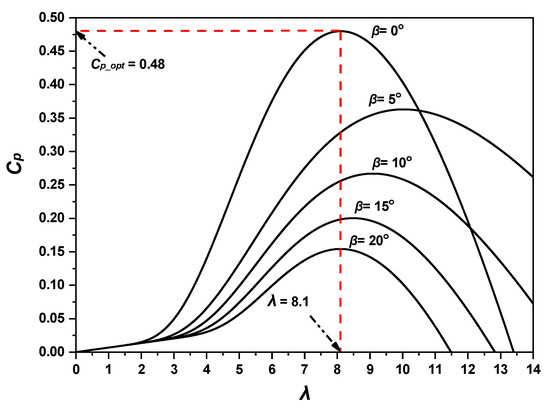 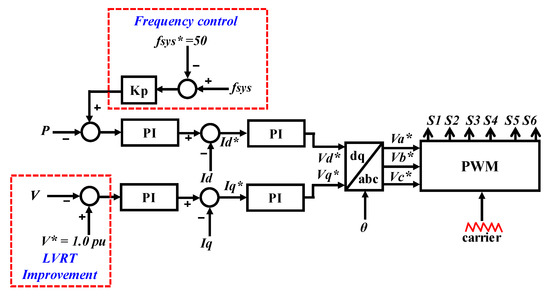 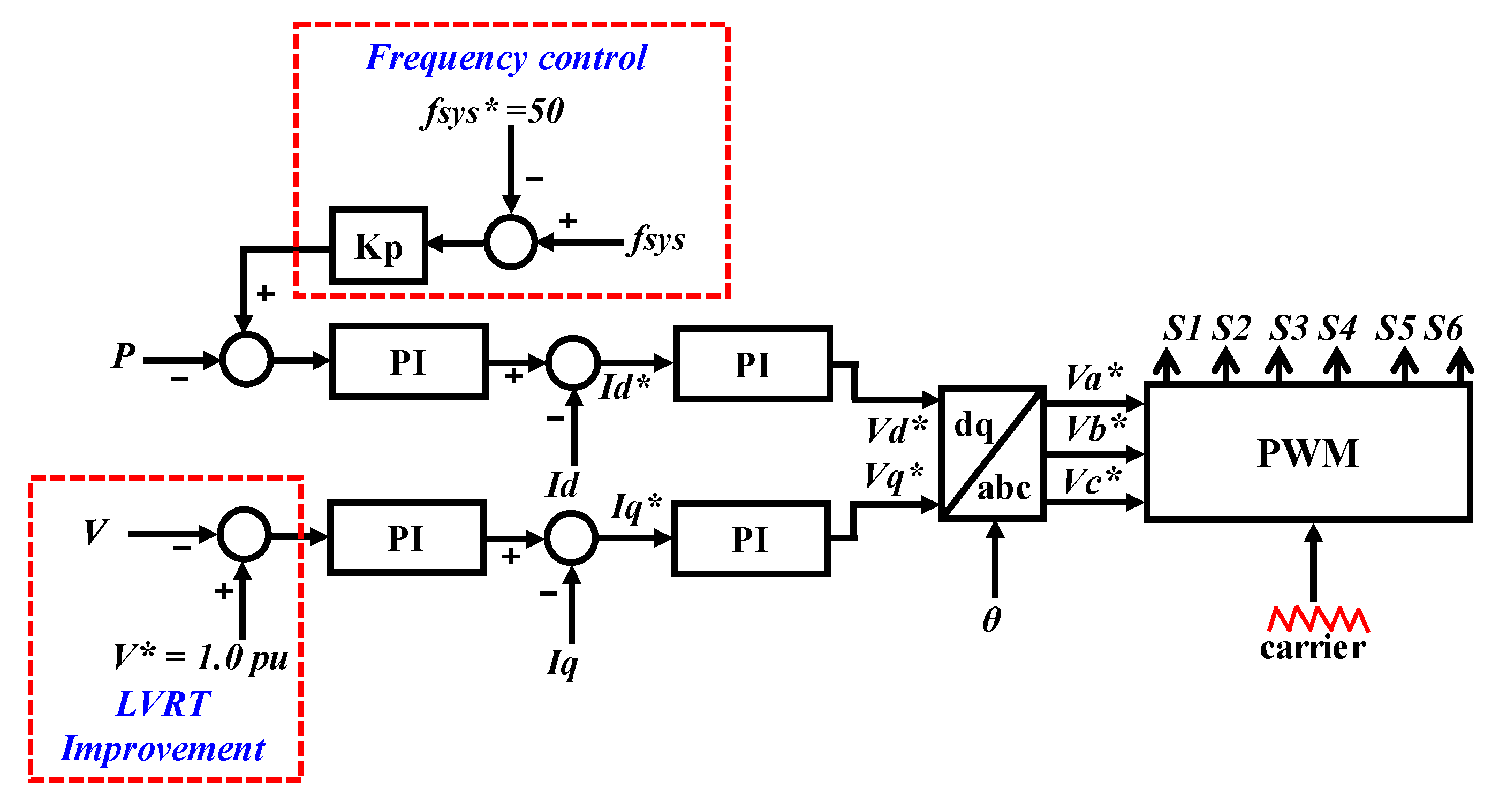 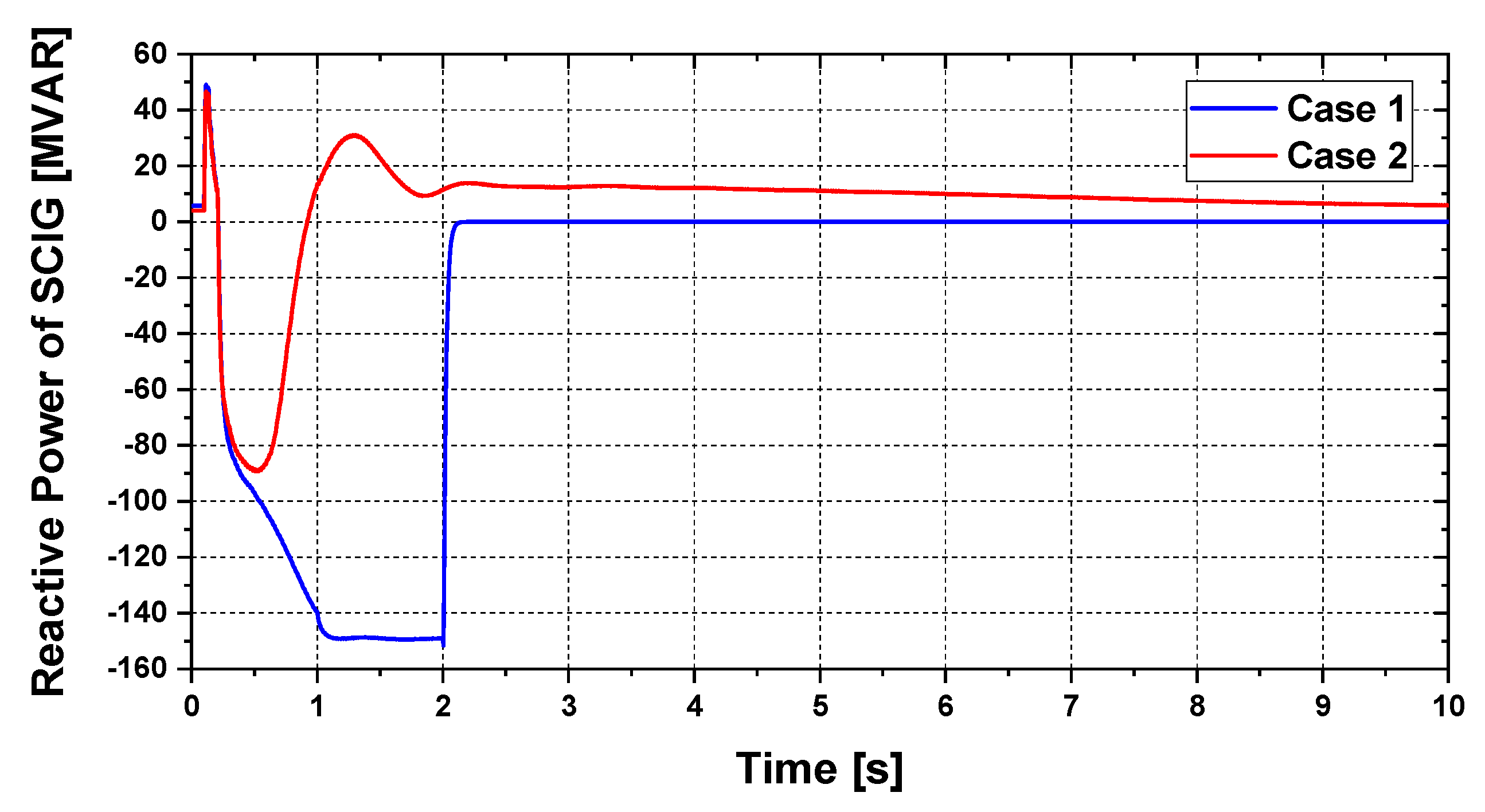 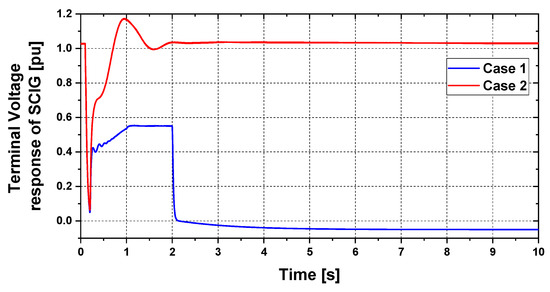 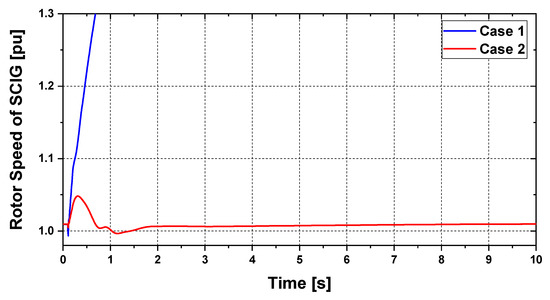 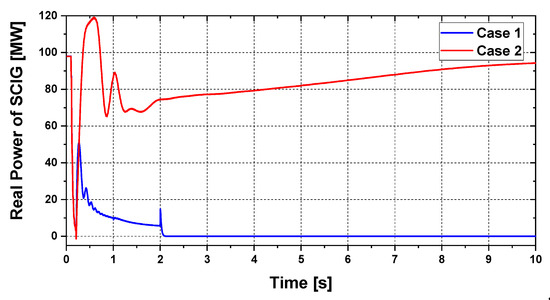 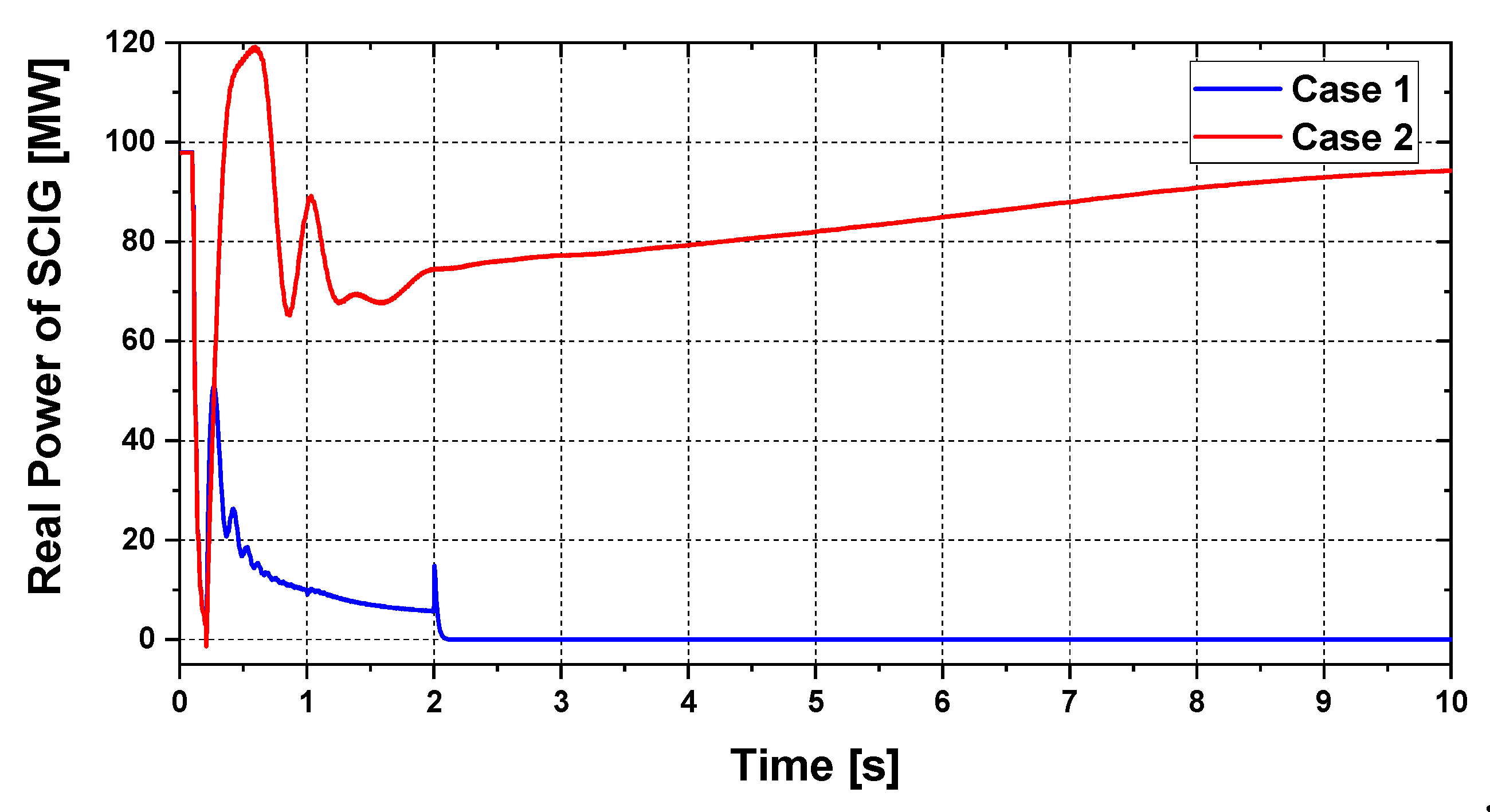 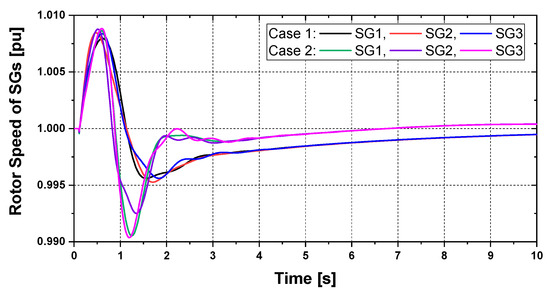 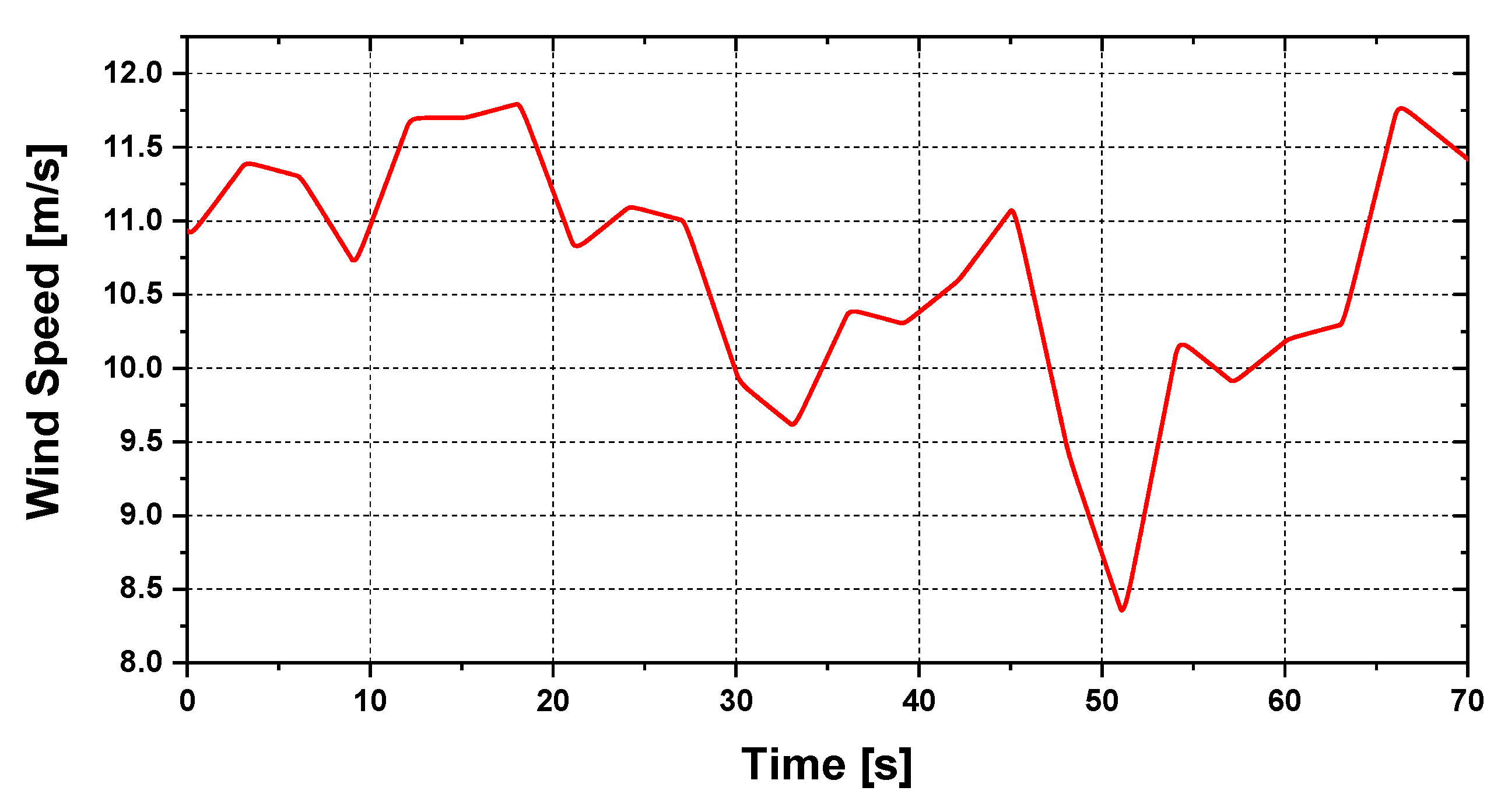 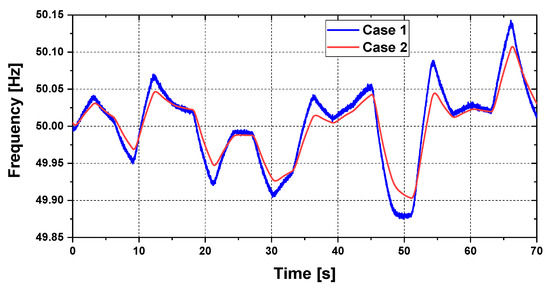 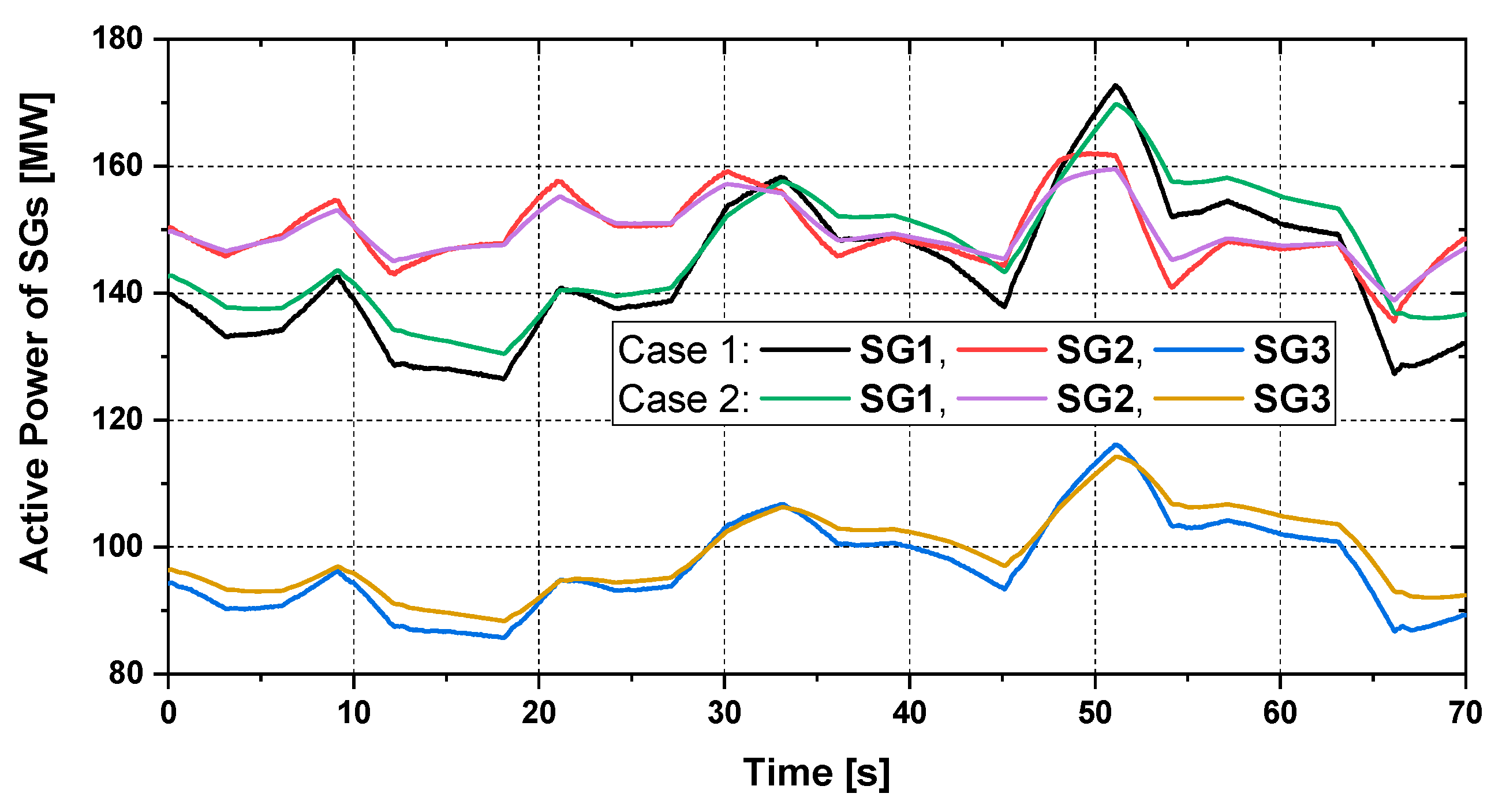 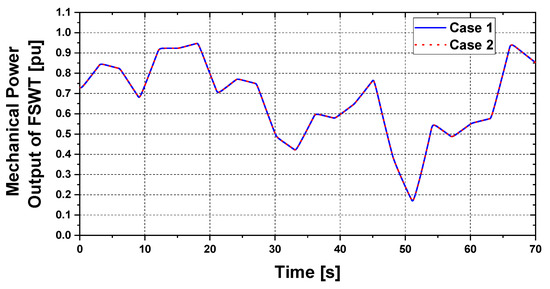