Fuel cell (FC)-driven railroad propulsion systems (RPSs) have been much appreciated for the past two decades to get rid exhausts of fossil fuels, but the inability of FCs to capture regenerative power produced by propulsion systems during regenerative braking and the dependency of its power density on operating current density necessitates the hybridization of FCs with batteries and/or supercapacitors to utilize the best features of all three power sources. Contrary to the research trend in hybridization where the purpose of hybridization such as fuel saving, high efficiency, or high mileage is achieved by certain operational algorithms without going into detail models, this study using detailed models explores the impact of high-power charging limitations of batteries on the optimization of hybridization, and proposes a solution accordingly. In this study, all three power sources were modeled, the optimal and suboptimal behaviors at the individual level were identified, and power distribution was implemented for a propulsion system, as recommended by the optimal features of all individual power sources. Since the detailed modeling of these power sources involves many mathematical equations and requires the implementation of continuous and discrete states, this study also demonstrates how, using C-MEX S-Functions, these models can be implemented with a reduced computational burden. View Full-Text
Keywords: railroad propulsion systems; power density; current density; state of charge; polarizations railroad propulsion systems; power density; current density; state of charge; polarizations
►▼ Show Figures 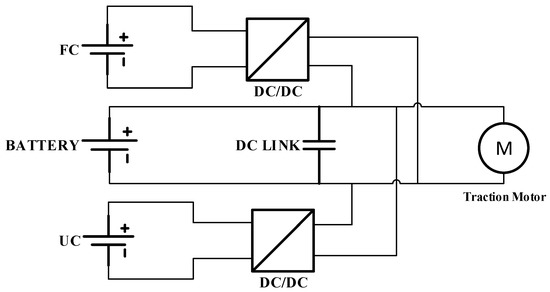