:
The coexistence of TV broadcasting and mobile services causes interference that leads to poor quality-of-service for TV consumers. Solutions usually found in the market involve external band-stop filters along with TV reception log-periodic and Yagi-Uda antennas. This paper presents a log-periodic antenna design without additional filtering that serves as a lower cost alternative to avoid interference from mobile services into the UHF TV. The proposed antenna operates in the UHF TV band (470–790 MHz-passband) and rejects the 800 MHz and 900 MHz bands (stopband) of 4G/LTE-800 and GSM900 services, respectively. Matching to 50 Ohms is very satisfactory in the passband with values of S11 below −12 dB. Furthermore, the antenna is highly directive with a realized gain of approximately 8 dBi and a front-to-back ratio greater than 20 dB.
Keywords:
CST simulations; GSM900 band rejection; log-periodic dipole antennas; 4G rejection

The adoption of digital modulation and advanced video compression techniques for terrestrial TV broadcasting, replacing analog broadcasting, resulted in considerable improvements in the efficiency of frequency spectrum utilization, making it possible to broadcast several TV programs in multiplex in a single 8 MHz TV channel. This transition set a part of the TV spectrum free for utilization for other applications, and thus, the wireless communications industry saw this transition as an opportunity to use the released frequency spectrum for mobile communication services. In turn, that led to European Member States being urged by the European Parliament to make sure that the frequency spectrum is efficiently utilized [1]. The European Commission (EC) investigated the allocation of the 790–862 MHz frequency band (the so-called 800 MHz band and part of the former UHF TV band) to Long Term Evolution (LTE-800) wireless services as a “digital dividend”, thus redistributing the benefits of digital TV migration [2]. The EC decision described in [3] suggests a harmonized plan that was adopted by European states (ITU Region 1) for LTE network deployment in the 800 MHz band. This band is particularly important for the mobile communications industry because of its relatively low building material penetration radio losses and the fact that most of the time mobile phones are used indoors. According to this plan, the spectrum of 790–862 MHz involves the use of chunks of 30 MHz uplink and 30 MHz downlink transmissions in the FDD (Frequency Division Duplex). Moreover, the uplink spectrum is separated from the downlink spectrum using an 11 MHz-wide frequency gap. On the other hand, DTT (Digital Terrestrial Television) is allocated the 470 MHz to 790 MHz band and that just leaves a 1 MHz-wide frequency gap between DTT broadcasting and LTE-800 mobile communications. A useful study performed in [4] investigates the effects of interference on the degradation of the QoS (quality-of-service) in the TV broadcasting band due to its vicinity with the LTE-800 band. Following the clearance of the 800 MHz band, the requirement of allocating the 700 MHz band (694–790 MHz) was stated in a worldwide resolution [5], which was later approved in the 2012 World Radiocommunication Conference (WRC-12) of ITU-R [6]. Thereafter, the 2015 World Radiocommunication Conference (WRC-15) [7] of ITU-R states the provisions used to deploy the 700 MHz band in ITU Region 1. Another significant study is presented in [8] and investigates the interference effects due to coexistence of the DTT broadcasting service and LTE service in both the 700 MHz and 800 MHz bands.
This paper is an extended version of a paper submitted to the IEEE NEMO-2019 conference [9]. Moreover, the proposed antenna in this paper has been further optimized to achieve higher and flatter realized gain (RG) along with a higher FBR (front-to-back ratio) throughout the DTT reception passband.

LPDAs (Log Periodic Dipole Arrays) or simply log-periodic antennas are frequently used for TV reception since the 1960s because of their excellent wideband properties and high directivity despite the fact that their peak gain is generally lower than that of similar size Yagi-Uda antennas [10]. Furthermore, LPDAs provide flat gain throughout their operating band and are thus considered as the best solution for applications where broadband behavior and gain flatness are important [11,12]. Compared to Yagi-Uda antennas, which are generally narrowband, LPDAs provide better gain flatness but a relatively lower RG. The performance of these antennas differs also because of their different feeding pattern [13]. Conventional LPDAs are usually designed using calculation guidelines proposed by Carrel in [14]. The basic LPDA geometry is shown in Figure 1.
A conventional LPDA is constructed using two booms arranged parallel to each other and separated by air using insulating or metallic fasteners at the rear end, as well as the front end, and sometimes in the middle of the antenna (see Figure 3). The two booms are forming a two-line air-dielectric transmission line, which feeds the antenna dipoles. The rear end fastener is usually metallic and acts also as a short-circuit stub. The spacing between the two conducting booms along with their cross-section size and shape controls the transmission line characteristic impedance, and therefore, it is important for matching of the antenna to a feeder cable [15]. In most cases, the antenna is matched to a feeding cable impedance of 50 Ohms in general or 75 Ohms for TV reception. The dipoles are fixed to the booms in such a way that the length of the dipoles decreases as we move from the rear end of the antenna toward the front end. In addition, half-dipoles are alternatively connected to the upper and lower booms, and two half-dipoles together form a complete dipole. The phase inversion between the feeds of the two consecutive dipoles is achieved because of the dipoles being arranged in a criss-cross fashion. This phase inversion ensures that the antenna always radiates as an end-fire dipole antenna array [16]. Contrary to Yagi-Uda antennas, where there is only one dipole that is active and all the other dipoles are passive, all the dipoles in an LPDA are fed by the conducting booms transmission line, and therefore all the dipoles are active. Depending on dipole length and thickness, each dipole of the LPDA resonates around a specific frequency. Antenna gain and/or bandwidth significantly increase with the total number of dipoles used [17]. The feeding is provided at the front end of the booms (left end of the booms in Figure 3) using a coaxial cable that is usually passing though one of the booms that are hollow.
Carrel [14] introduced design equations for the calculation of the dimensions in the case of the conventional LPDA geometry. The apex angle is the half angle in which all the dipoles are confined, and it is mathematically expressed as
In the above expression, the parameter τ is called the “scaling factor” and is the ratio of the lengths or diameters of two consecutive dipoles as shown by the following expression: where Ln and dn are, respectively, the length and the diameter of the nth dipole. In addition, the parameter σ shown in (1) is called the “spacing factor” and is defined as: where sn is the spacing between the nth dipole and its consecutive (n + 1)th dipole. The overall physical dimensions of the antenna significantly depend on the above two factors (τ and σ). Sometimes, a fixed diameter is used for the dipoles in order to simplify the antenna design and reduce costs.

An optimized interference-rejecting 10-dipole LPDA that mitigates interference problems because of UHF DTT broadcasting co-existence with LTE-800 mobile communications band has been presented. Compared to conventional LPDAs, the proposed optimized LPDA demonstrates improved performance in the UHF DTT reception band (passband), which improves the quality-of-service (QoS) of the TV reception. Another advantage is that the proposed antenna offers high-rejection capabilities in the LTE-800 band without the use of external bandstop filters, which reduces the final cost of the antenna. Furthermore, this paper highlights a novel design procedure for LPDAs in order to achieve desired passband and stopband characteristics by simply optimizing antenna geometry [19]. The proposed antenna exhibits excellent matching in the passband with low S11 values below −12 dB. Moreover, the antenna achieves a relatively flat gain of approximately 8 dBi in the passband and also demonstrates a highly directive behavior with a front-to-back ratio of 20 dB. Finally, this paper also presents the S11, RG, and radiation pattern measurements of the fabricated proposed antenna in an anechoic chamber. The measured results show good agreement with simulated results.

The work of T. H. Loh and D. Cheadle were supported by The 2017-2020 National Measurement System Programme of the UK government’s Department for Business, Energy and Industrial Strategy (BEIS), under Science Theme Reference EMT20 of that Programme. 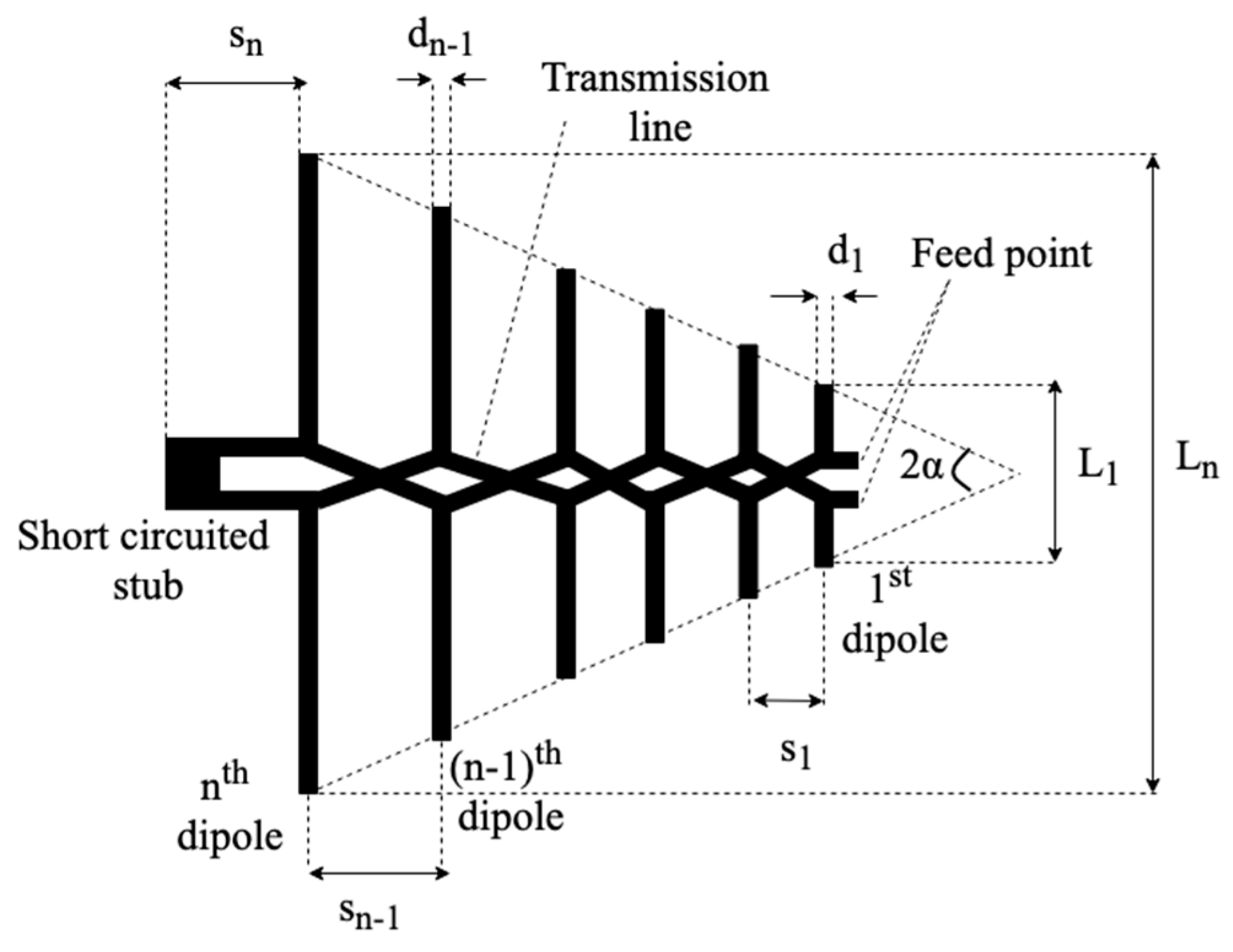 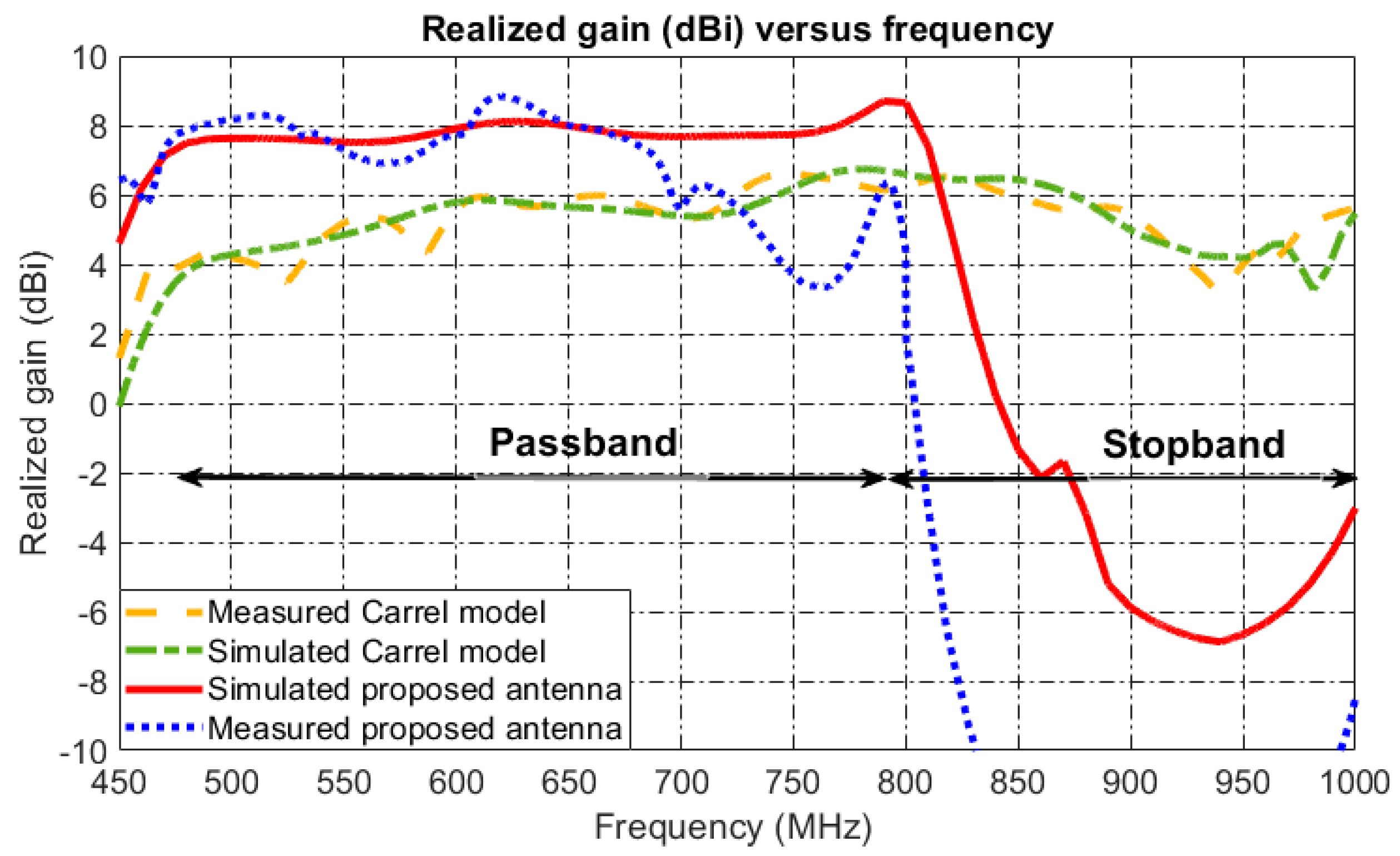 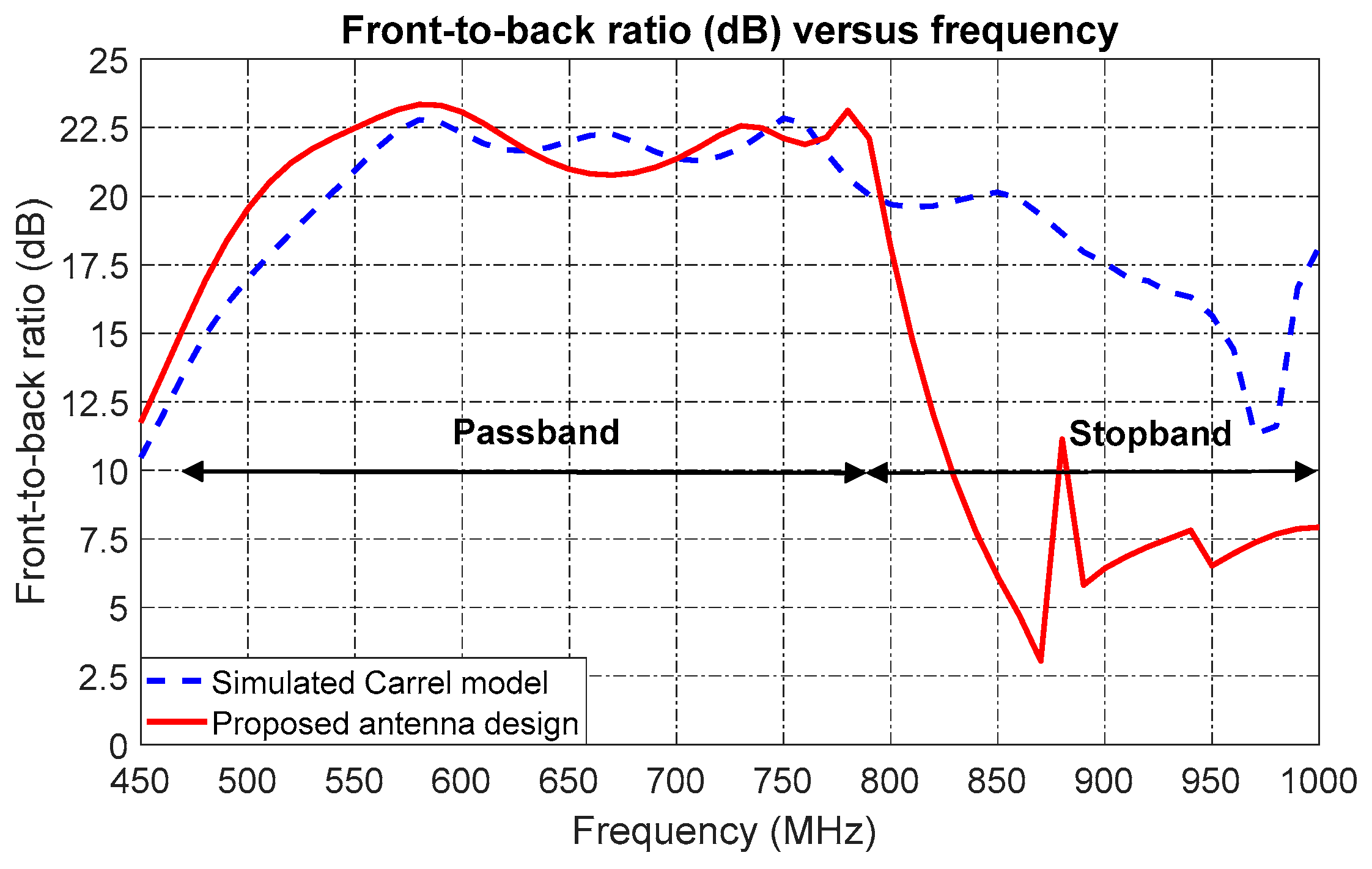 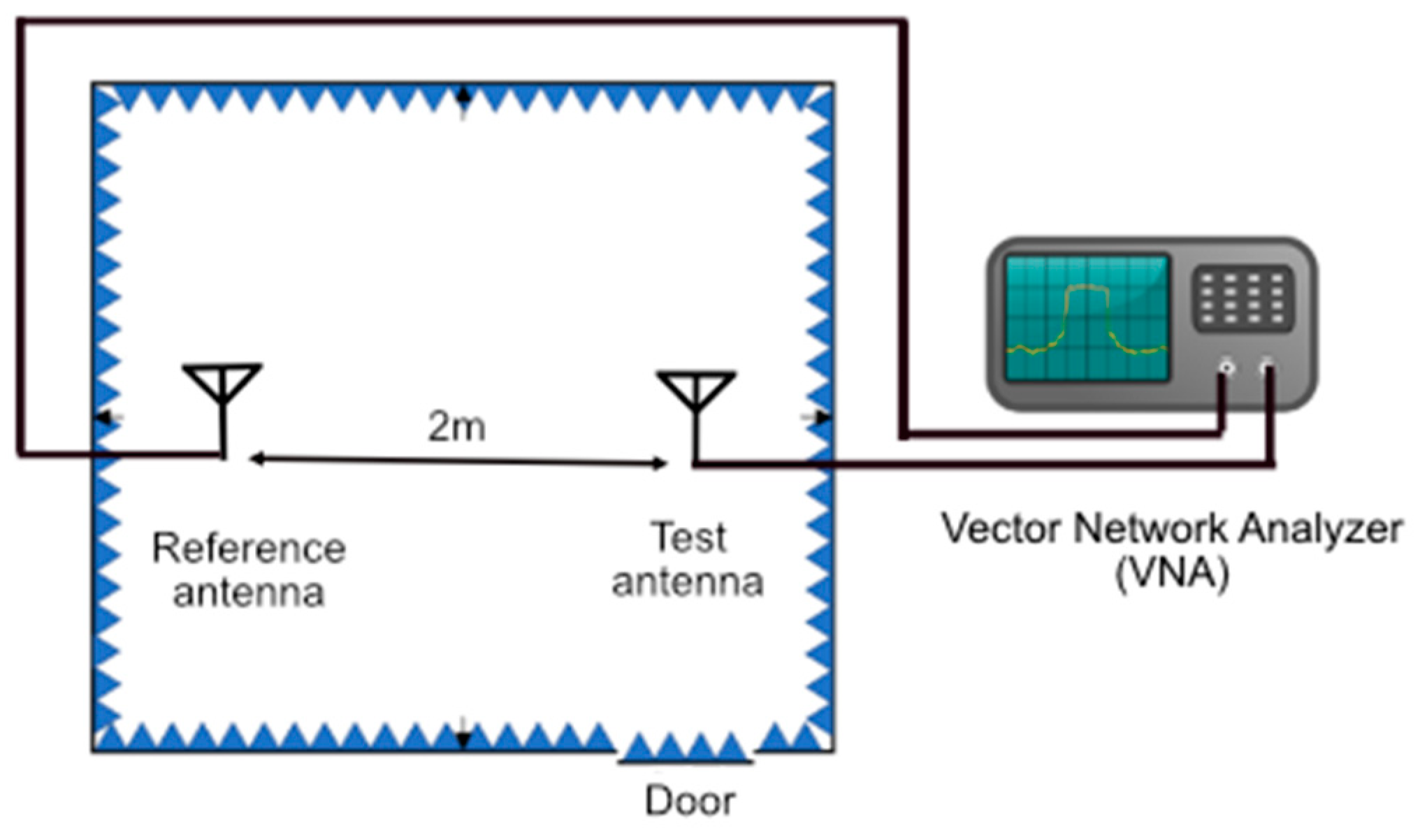