The direction of arrival (DOA) estimation is an important problem in array signal processing, and has a wide range of applications in the communication, radar, and sonar fields [1,2,3]. The conventional beamforming (CBF) method, also known as the Bartlett beamforming method [4], is the earliest known array-based spatial spectrum estimation algorithm. CBF extends the Fourier-based method of the spectrum estimation in the time domain to the spatial domain, and the angular resolution of CBF is limited by the "Rayleigh limit". To improve the resolution performance, methods based on the time-domain nonlinear estimation method have been proposed, such as the maximum entropy method (MEM) [5] and the minimum variance method (MVM) [6]. Furthermore, the subspace-based methods have been proposed in [7] to improve DOA estimation performance, including the multiple signal classification (MUSIC) method [8], Root-MUSIC method [9,10], and the estimating signal parameters via rotational invariance techniques (ESPRIT) method [11].
Additionally, the least squares-ESPRIT method [12,13] provides superior resolution and is asymptotically unbiased and efficient. More recently, maximum likelihood (ML) methods [14,15], the weighted subspace fitting method [16], and multi-dimensional MUSIC method [17] have also been proposed for DOA estimation. The research of ML-based methods is developing rapidly—for example, Ref. [18] proposes an alternating projection (AP) method to solve the optimal solution of the likelihood function with lower computational complexity.
The compressed sensing (CS) theory [19] asserts that, from far fewer samples than traditional methods used, one can recover certain signals, which means that the signal is uniformly sampled at or above the Nyquist rate. The theory of compressed sensing [20] mainly includes three aspects: the sparse representation of the signal, the design of the observation matrix, and the reconstruction algorithm. The design of the observation matrix is the key to ensuring the quality of signal sampling. The observation matrices are mainly divided into two categories, one of them being the random observation matrix, and the local Fourier observation matrix is a typical random matrix which can reconstruct the original signal very well [21].
By studying the uniqueness of the norm solution, and the equivalence of and norm solutions, Donoho first gave a sufficient condition that the norm solution can correspond to only the most sparse solution [22], and transformed a non-deterministic polynomial problems (NP-hard problem) into a convex optimization problem. These contributions make it not only possible, but feasible in reality to reconstruct the sparse signal. Later, Donoho proposed the concepts of “Compressed Sensing” [20] and “Compressive Sampling” [23], so that the theory of compressed sensing [19,24] was formally established.
Sparse representation provides a new perspective of DOA estimation, and has attracted lots of interest [25]. By exploiting the sparsity of targets in the spatial domain, the corresponding algorithms have been proposed to estimate DOA. The sparse Bayesian learning (SBL) [26,27,28] and the relevance vector machine (RVM) [29] were proposed. The SBL method achieves a sparser solution without the additional parameters; however, the high computational complexity of SBL methods means there are limitations to its practical application. Combining this with the application of the CS theory in radar signal processing, an iterative adaptive approach (IAA) [30] was proposed to achieve higher resolution. When the IAA algorithm is applied to Space-Time Adaptive Processing, a high-resolution clutter spectrum can be obtained without training the distance gate [31,32,33]. The -singular value decomposition method (-SVD) [34,35,36] is also proposed to solve the problem of excessive computation of the norm method in the case of faster beat, and estimates the spatial spectrum using the sparse signal reconstruction. However, the estimation performance of -SVD method reduces with decreasing Signal to Noise Ratio (SNR). The orthogonal matching pursuit method (OMP), which is used in [8], reconstructs the sparse signal with an observation matrix. The multiple orthogonal matching pursuit (MOMP) [8] and optimized orthogonal matching pursuit (OOMP) [37] based on the OMP method were also proposed. The OMP methods greatly reduce the computational complexity and improves the estimation performance.
Since the DOA is estimated by measuring the relative phases among antennas, the channel phase inconsistency cannot be ignored in the practical scenarios. Phase errors among antennas have a significant effect on the performance of DOA estimation. To solve this problem, Ref. [38] proposed a calibration algorithm to estimate the calibration matrix consisting of the unknown phase errors and a set of calibration sources. An eigenstructure-based method for direction-finding in the presence of phase uncertainties is also presented in [39,40,41] proposed a method based on the eigendecomposition of the covariance and conjugate matrices. However, these methods are difficult to use in practical scenarios owing to the high computational complexity.
In this paper, the problem of DOA estimation is investigated in a scenario with unknown phase errors among the antennas. By using a diagonal matrix, the sparse-based system model with additional phase errors is formulated. Then, the DOA estimation problem is converted into a sparse reconstruction problem using the CS theory. To improve the estimation performance, a novel reconstruction method is proposed, where both the DOA and the unknown phase errors are estimated iteratively. We also calculate the phase errors using a gradient descent method with the theoretical expressions. Finally, we compare the DOA estimation performance of the proposed method with state-of-the-art methods. In summary, we make the following contributions:
The remainder of this paper is organized as follows. The uniform linear array (ULA) system model with phase errors is elaborated in Section 2. The proposed sparse method with unknown phase errors is presented in Section 3. Simulation results are given in Section 4. Finally, Section 5 concludes the paper.
Notations: Capital letters in boldface denotes matrices, and lowercase letters denotes vectors. denotes the Frobenius norm. denotes the matrix transpose. denotes the Hermitian transpose. denotes the set of matrices with the entries being complex numbers. denotes an identity matrix. For a vector , denotes a diagonal matrix with the diagonal entries from . For a matrix , is a linear transformation which converts into a column vector. For a vector , denotes the th entry of .

In this paper, we adopt a ULA system to solve the DOA estimation problem. This system is supposed to have N antennas, with inter-distance d. As shown in Figure 1, K unknown signals are received by these arrays, and the k-th signal () has an arrival angle .
As shown in Figure 1, the phase difference of any two adjacent received signals is: where is the signal wavelength.
Firstly, consider the situation of one signal, where denotes the n-th received signal at time t. where is the time interval at which two antennas receive signals.
The received signal can also be written as: where is the signal frequency.
Thus, where .
Substituting (4) into (2) from (1) and (5), we observe that signals received by all antenna arrays are:
Now, considering two unknown signals and , signals received by the n-th antenna element can be expressed as:
Therefore, the signals received in total can be written as: where , denotes the steering vector for the k-th signal. , , and denotes the additive white Gaussian noise (AWGN).

In this section, a novel direction-finding method based on the Simultaneous Orthogonal Matching Pursuit (SOMP) [42] method is proposed in a scenario with phase errors. SOMP [42] is a multiple measurement vector (MMV) extension of the OMP algorithm. With less strict requirements on the signal sparsity, this method can realize the recovery of sparse signals by increasing the number of measurement vectors. The details about the proposed DOA estimation method with unknown phase errors is given in Algorithm 1.
At Step 4 of Algorithm 1, the estimated sparse matrix is updated by using the SOMP method. The SOMP method for the sparse reconstruction is given in Algorithm 2. The SOMP algorithm is an iterative procedure, and in each iteration of the SOMP method an atom is selected, and the residual is updated. The next was selected to maximize the correlation with the current residual. In this method, we use as the dictionary matrix instead of .
At Step 7 of Algorithm 1, we use a gradient descent method to update the phase errors. A gradient descent is a first-order iterative optimization algorithm applied in finding the minimum of a function. Steps proportional to the negative of the gradient (or approximate gradient) of the function at the current point are taken to find a local minimum of a function using gradient descent. We use the following Lemma to derive the gradient descent method.
In order to get the steepest descent direction, the derivation is required. The received signal vector can be expressed in another form as: where .
To get the exact step of every iteration, we define the following objective function: and the derivation of can be expressed as:
Additionally, the derivation of is: where is the real part of , and is the image part. Therefore, (12) can be expressed as: where and
We adopted as the step for every iteration, where p is a fixed step.

In this paper, we have investigated the DOA estimation problem of the ULA system in the scenario with unknown phase errors among antennas. The system model considering the additional phase errors was formulated by using a diagonal matrix. The DOA estimation problem can be converted into a sparse reconstruction problem to exploit the signal sparsity in the spatial domain based on the CS theory. Then, a novel method was proposed to estimate DOA, which updates the sparse signals and phase errors iteratively. Simulation results confirm that the performance of DOA estimation using the proposed method outperforms the state-of-the-art methods. Future work will focus on the extension of the proposed method in a scenario with moving platforms. 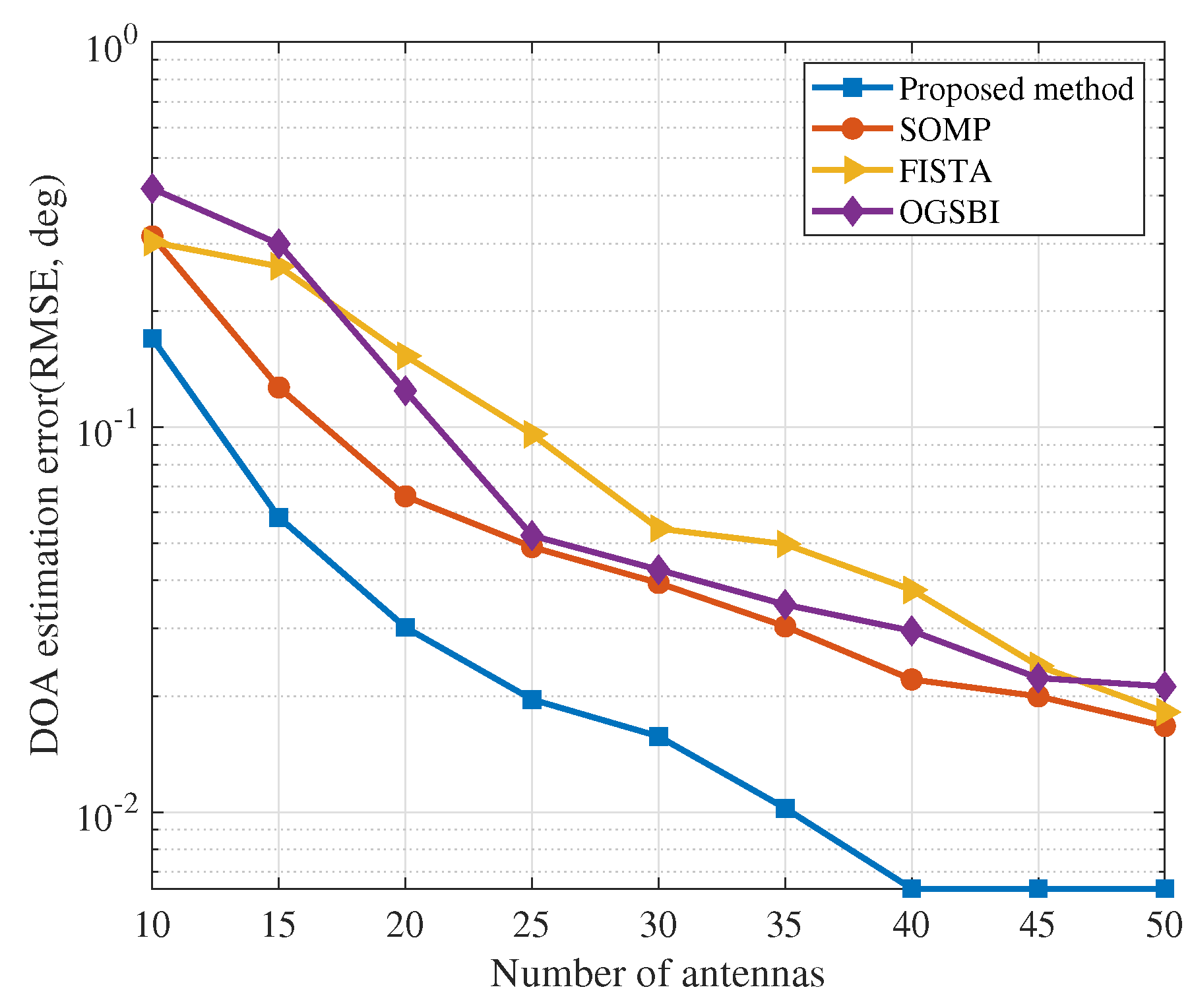 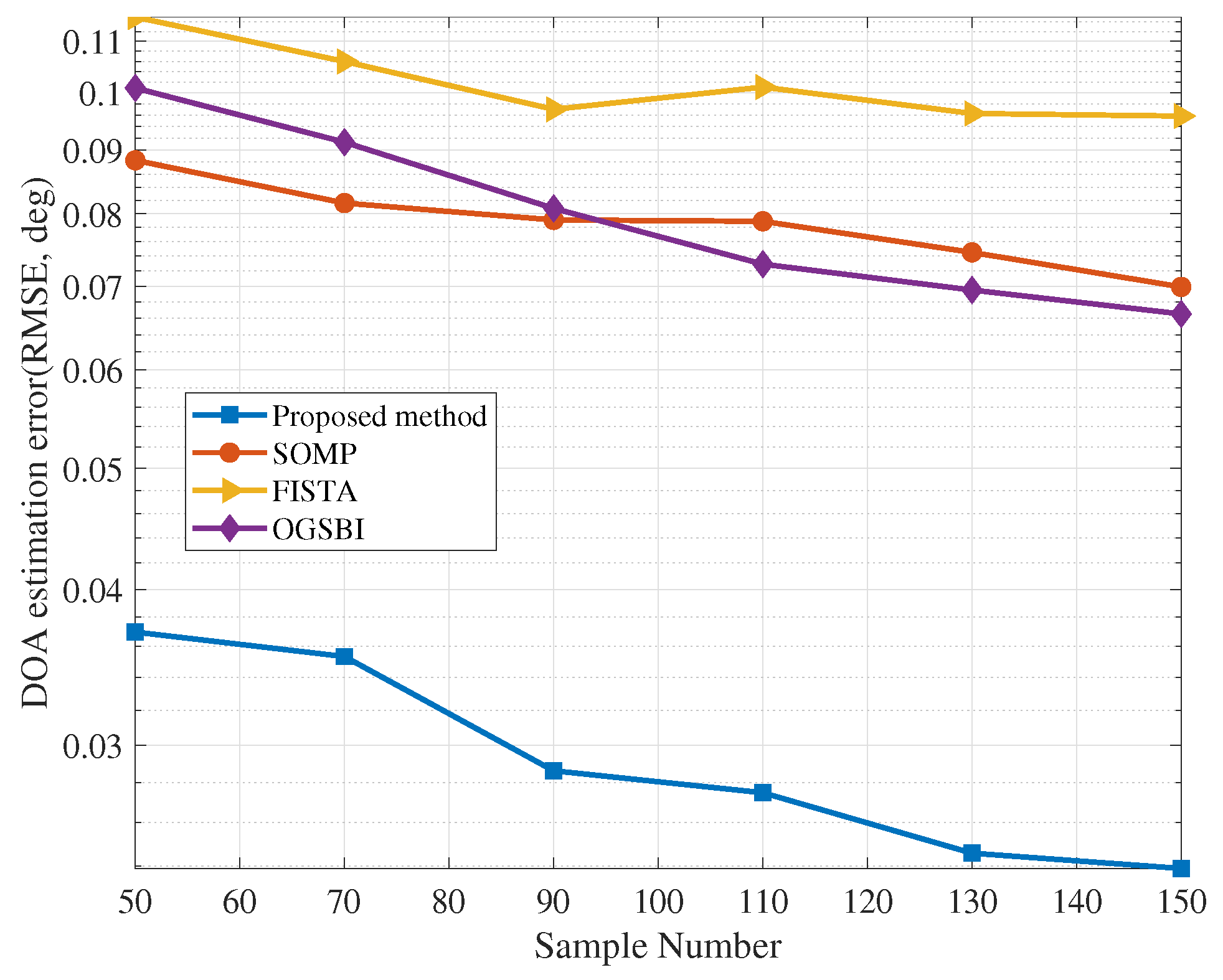 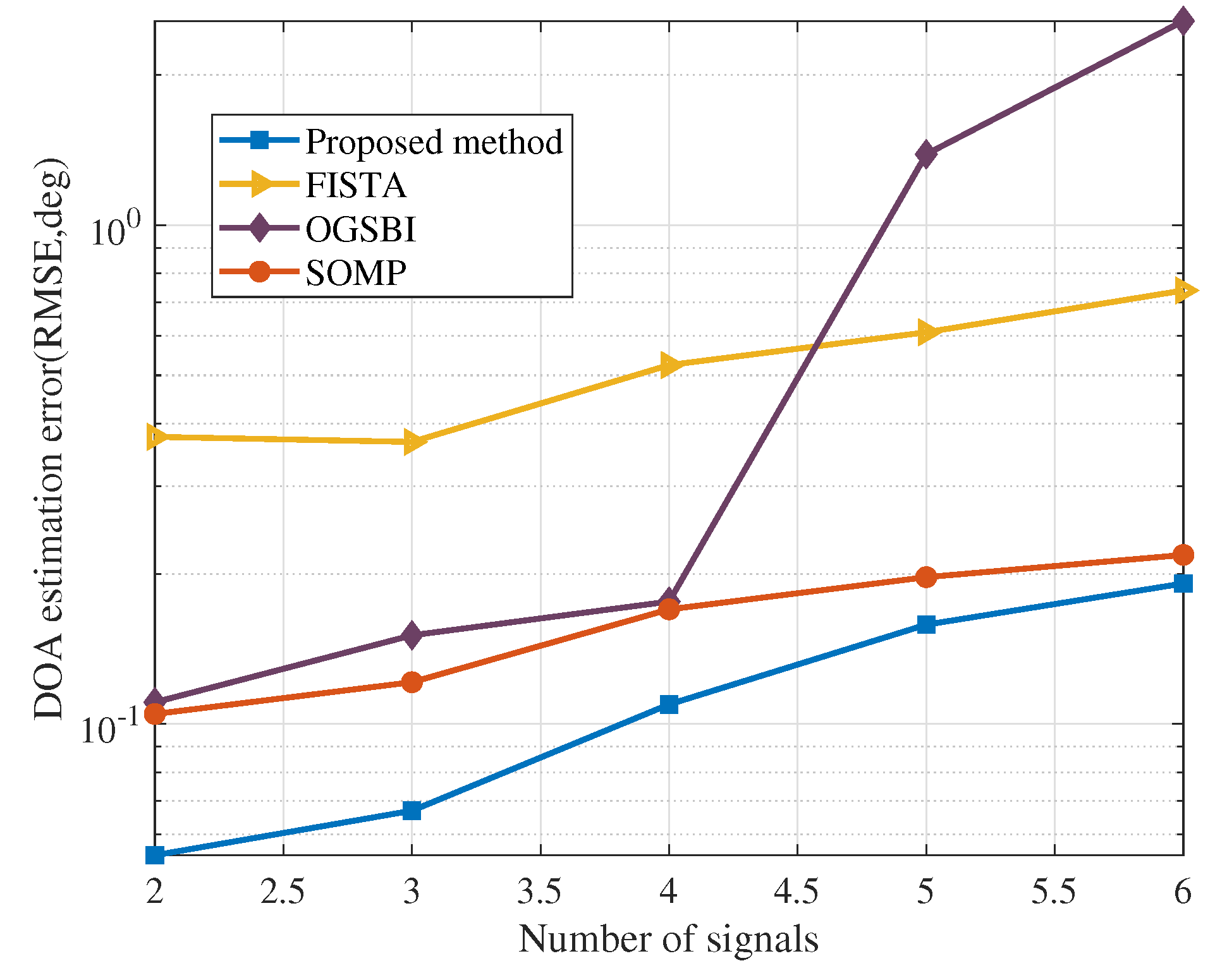 Table 2. Simulation Time.
Table 2. Simulation Time.
© 2019 by the authors. Licensee MDPI, Basel, Switzerland. This article is an open access article distributed under the terms and conditions of the Creative Commons Attribution (CC BY) license (http://creativecommons.org/licenses/by/4.0/).
We use cookies on our website to ensure you get the best experience. Read more about our cookies here.
Accept
We have just recently launched a new version of our website. Help us to further improve by taking part in this short 5 minute survey here. here.
Never show this again