Performance Analysis of IEEE 802.11p for Continuous Backoff Freezing in IoV
Next Article in Special Issue

Article
A High Capacity Watermarking Technique for the Printed Document
by

:
Digital watermarking technology is an effective method for copyright protection of digital information, such as images, documents, etc. In this paper, we propose a high capacity text image watermarking technique against printing and scanning processes. Firstly, this method obtains the invariant in the process of printing and scanning under the mathematical hypothesis model of print-scan transformation. Then based on the print-scan invariant, the Fourier descriptor is used to flip the trivial pixel points with high frequency information on the character boundary. Next, considering the resolution of the print-scan equipment and its influence on the print-scan invariant, a quadratic quantization function is proposed to embed watermark information of multiple bits for a single character. Finally, the QR code (Quick Response code) is researched, which has large information capacity, robust error correction ability and high decoding reliability. By using the QR code as the watermark information, we can reduce the impact of bit error rate during watermark extraction, and the robustness of the watermark information can be improved. The experimental results show that the proposed text watermarking algorithm has the advantages of anti-print scanning, anti-scaling, large capacity and good visual effects.
Keywords:
Text watermarking; anti-print scan; Fourier descriptor; large capacity; QR code

With the development of the Internet, data and information are ubiquitous in our daily life, and information exchange is becoming more frequent. However, digital information is easy to copy and transcribe, the copyright protection of digital information is becoming ever more prominent. Digital watermarking technology provides a way to solve the appeal problem. At present, the digital watermarking technology is relatively mature for images because they have a lot of redundant information to embed watermark, and these algorithms usually use the information in frequency domain of image for watermark embedding. For example, literature [1,2,3,4] embeds watermark information in the discrete wavelet transform (DWT) domain of image and achieve good results. But the text document has relatively little redundant information, so how to effectively add digital watermark to the document is relatively difficult [5]. In addition, a text file not only appears in the form of digital information, but also in paper status by printing, copying, etc. Therefore, it is essential to study the anti-print scan text watermark for copyright protection [6].
The digital watermark is embedded with the redundant carrier of the text, and it is supposed to have better robustness, good visual effects and huge watermark capacity. Therefore, we need to make a tradeoff amongst the three to achieve better results. In general, the current text watermarking algorithms can be divided into three categories [7,8]: One is based on the text structure, another is based on the natural language processing, and the third is based on the image processing.
The text structure-based methods embed the watermark information by adjusting some features of text, such as line spacing, word spacing, and punctuation position. Brassil et al. proposed a method of line-shift coding [9] and word-shift coding [10]. Line spacing is used to embed watermark information in line-shift coding. Word-shift coding uses the word spacing to embed watermark information. They are both anti-print scan algorithms. However, these methods cannot resist the influence of text format changes, and the watermark capacity is relatively small. Many scholars are likewise constantly researching the algorithm of this type. For example, Alattar et al. [11] use line-shift coding and word-shift coding to embed watermark information together, and add error correction technology to resist attacks.
Linguistic-based approaches use the semantic features of the text to embed a watermark. For example, by replacing certain words or sentences in the text to embed the watermark without touching the semantics of the text content. Liu et al. [12,13] studied the text watermarking algorithm based on semantic features. This type of method will change the text content, so it does not applicable to the cases where the text content cannot be changed. The following research [14] is a good review article which presents a comparative analysis of structural and linguistic method, and some guidelines and directions are proposed in this paper.
Image-based methods need to convert the text documents into images, and embed the watermark by processing the features in the image. According to the different features used, the current image-based methods can be roughly divided into several types: based on shape features, gray-based features, boundary-based features, pixel-based features, and shading-based features. Table 1 shows the analysis and comparison of several algorithms.
In summary, existing text watermarking algorithms have different spaces for improvement in watermark capacity, visual effects, robustness, and blind extraction. Therefore, this paper proposes a text watermarking algorithm that is resistant to print-scan and can embed information at large capacities. The algorithm combines the print-scan invariant, Fourier boundary descriptors, quadratic quantization function, and the QR code, etc. The algorithm increases the watermark capacity by more than 200%, and the performance is improved in terms of robustness, visuality and bit error rate.

This section introduces some theories in watermarking algorithm. They are as follows: print-scan invariant, Fourier boundary descriptor, quadratic quantization function and the QR code.

This section will introduce the proposed watermark embedding and extraction method, as well as the flipping scheme of boundary pixels.

Based on the previous introduction, the following is an example of embedding two bits of watermark information for each character. The watermark embedding process is as follows:

According to the watermark embedding process, the corresponding extraction process is as follows:

The watermarking algorithm proposed in this paper does not target specific character types and font sizes, and has strong generality. In the experiment, we embed watermark to the English and Chinese documents, then analyze the visual effect, capacity and robustness of the watermark. At last, we compare the experiment results with those of the existing schemes.

4.3. Comparison with the State-of-the-Arts

This paper proposes a high capacity watermarking algorithm for the printed document. Our algorithm is designed by studying the print-scan process, Fourier descriptor, quantization function and the QR code. Furthermore, the performance of the proposed algorithm is compared with the previous methods to demonstrate the advantages in capacity, visual effect and robustness. Compared with the existing methods, our algorithm has the following advantages:
It should be noted that this algorithm needs to design the quantization function according to the error range produced by the print-scan equipment. For different printing and scanning equipment, the quantization function may be different and the visual effects will be different. In addition, the boundary flipping strategy can also be optimized when there are many character boundary points. Moreover, for the improvement of robustness, other better error correction and verification schemes can be designed to reduce the impact of bit error rate during the extraction process. For example, the two-layer cellular neural network (CNN) architectures proposed in literature [32] are very suitable for generating highly robust watermarking patterns. In general, the research of text watermarking algorithm is still essential, and the research space is still very broad. In addition, for further work, we will focus on optimizing this algorithm with neural network, enhancing the security of watermark information and implementing this algorithm in a consumable SoC of printer. 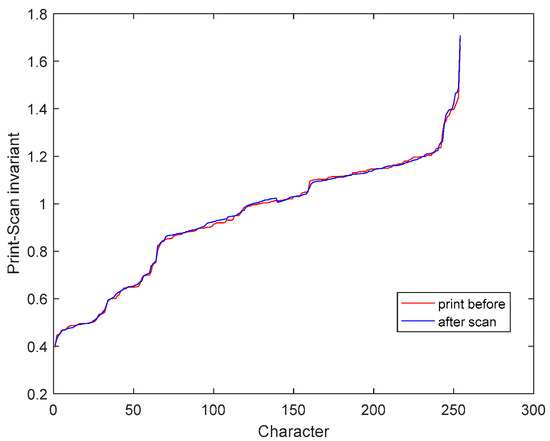 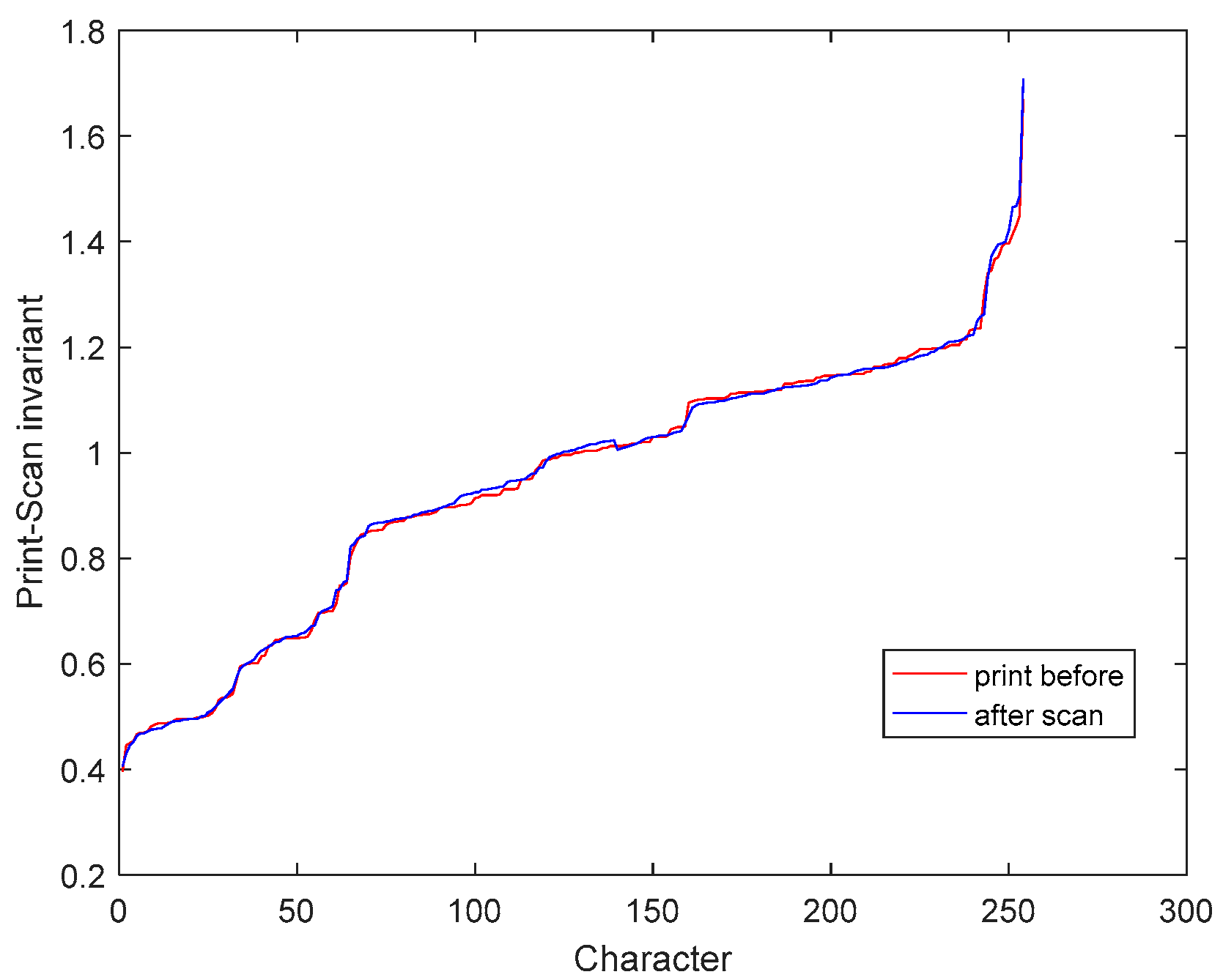 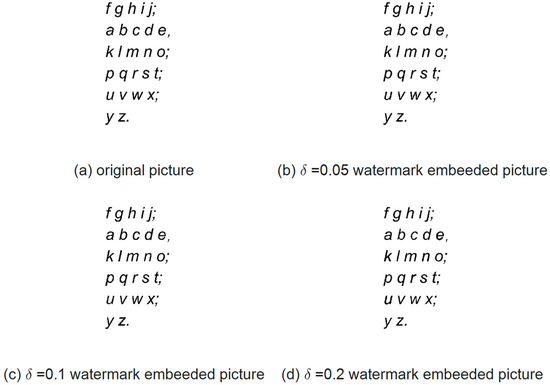 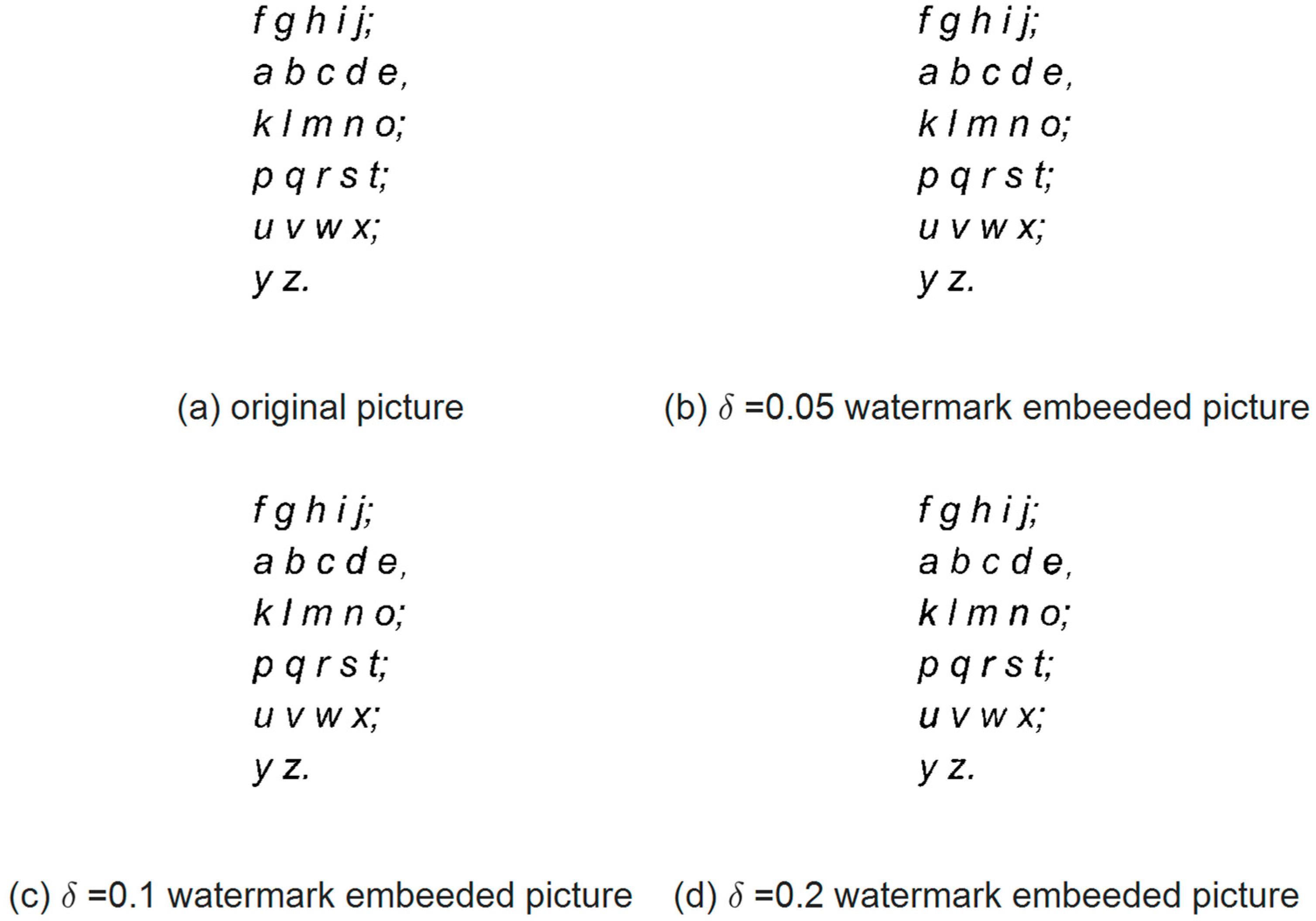 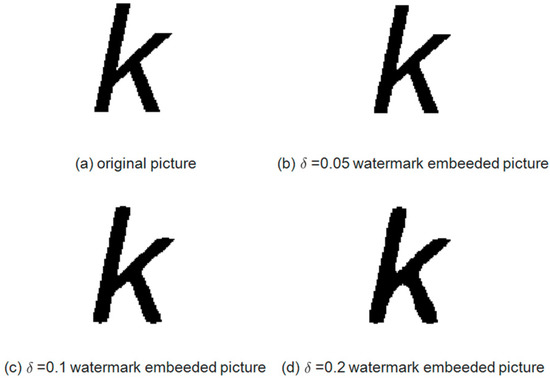 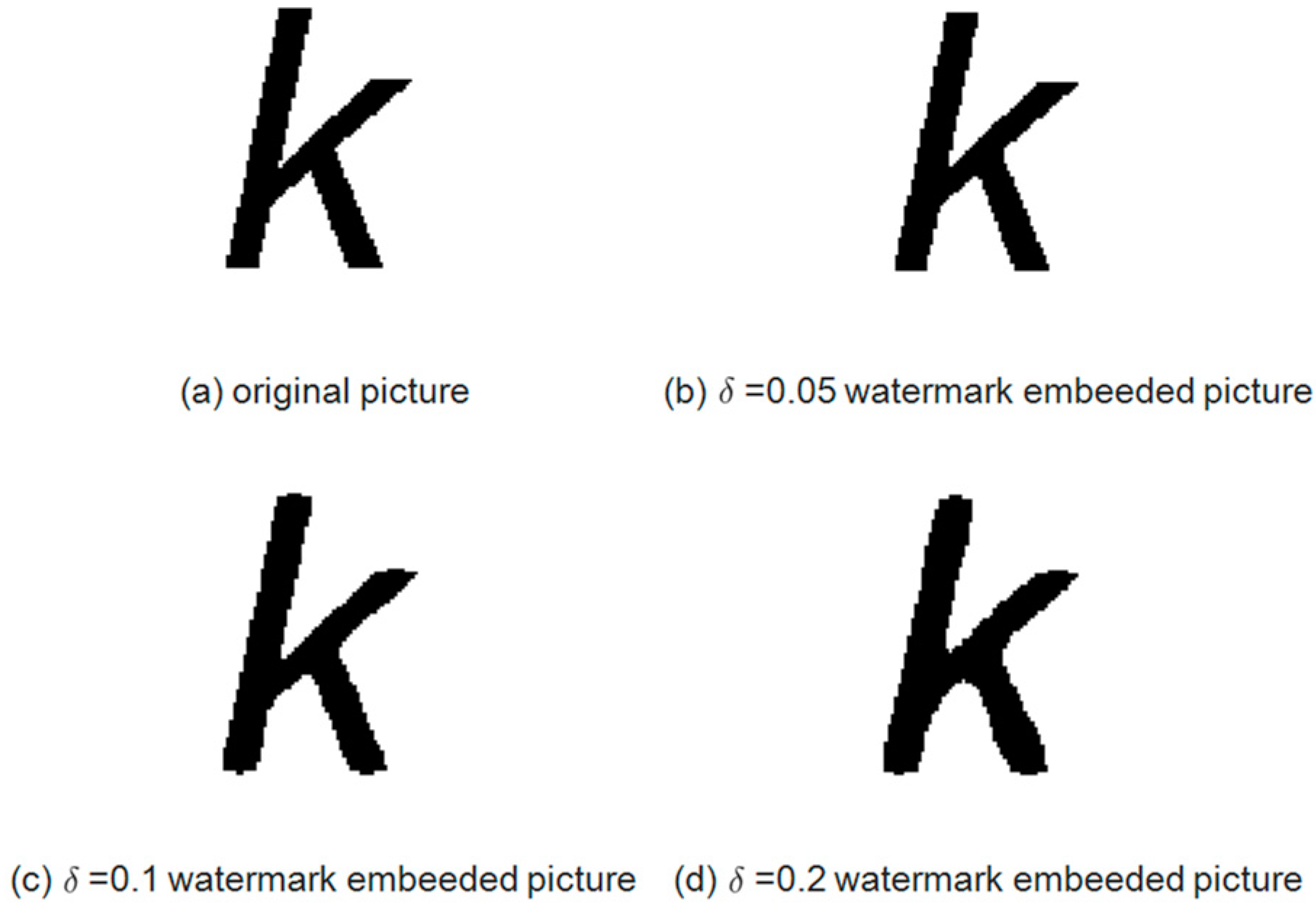 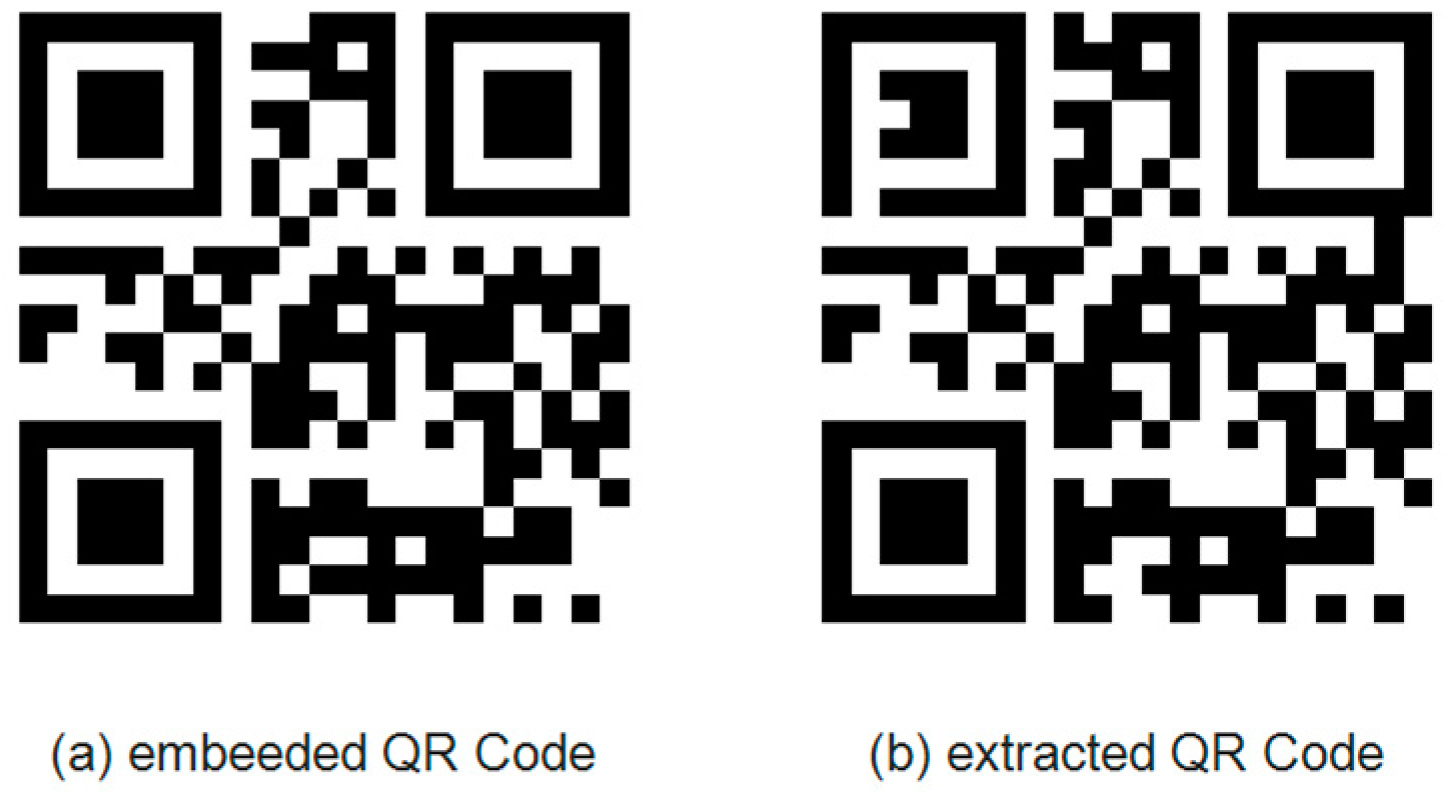