The Nano-Contact Vortex Oscillator (NCVO) is a highly nonlinear spintronic device that can depict chaotic and nonchaotic behaviors according to the current flowing through it. The potential use of such a device in the future-generation computing systems requires the knowledge of a realistic model capable of describing its exact dynamics. In this paper, we firstly investigate the behavior of NCVO based on the power spectral analysis. Furthermore, we propose and demonstrate two efficient approaches of reservoir computing for the modeling of such a device. The performances of the proposed models are addressed in two ways. First, the generated time-varying signals are compared with the simulated magnetizations of the NCVO at different operating currents. Then, the power spectral analysis of one of the two models is carried out to examine its overall behavior over the complete DC current operating range and its ability to diagnose chaotic and non-chaotic regimes. The proposed models show quite promising results that can be counted on for further research. View Full-Text
Keywords: computing systems; spintronic device; NCVO; modeling; chaos; reservoir computing computing systems; spintronic device; NCVO; modeling; chaos; reservoir computing
►▼ Show Figures 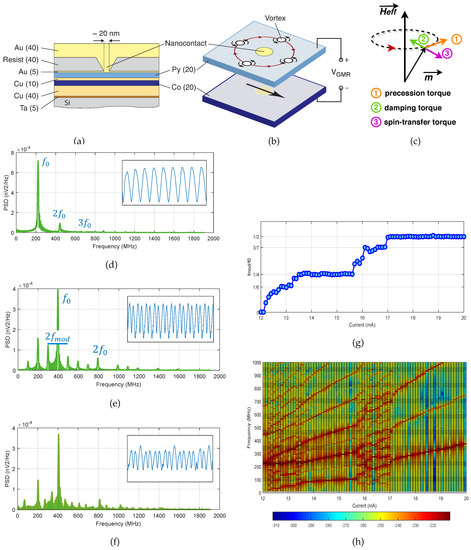