2.1. The Principle of Our Model for Monocular Depth Estimation

Figure 1 and Figure 2 show the principle of our model for monocular depth estimation. First, the input image was processed into a fixed size, then the input image was processed by the method of pyramid. Second, an innovative residual neural network of coarse–refined feature extractions for corresponding image reconstruction with long skip connections between corresponding layers in the neural network of coarse feature extractions and deconvolution neural network of refined feature extractions was proposed, through which the left approximate disparity map or right approximate disparity map was generated by the process that features outputted by the coarse residual neural network were multiplied by a fixed scale factor, and then the corresponding right image or left image was reconstructed based on the generated left approximate disparity map and input left image or the generated right approximate disparity map and input right image according to the method of bilinear interpolation. Finally, the left depth map or right depth map was generated based on input left image and corresponding reconstructed right image or the input right image and corresponding reconstructed left image according to the principle of binocular depth estimation that is shown in Figure 1 and Formulas (1–4). According to some [30,31], the basic principle of binocular depth estimation is as follows: (a) Formulas (1,2) are derived according to the principle of triangle similarity. (b) Formula (3) that is used to calculate disparity between the left view and corresponding right view is derived according to Formulas (1,2). (c) Formula (4) that is used to calculate depth from single image is derived according to the baseline distance between the cameras and the camera focal length .
To improve the training effect of our model, we proposed a novel training loss function that was a combination of the loss of corresponding view reconstruction based on SSIM [29], the loss of approximate disparity smoothness and the loss of depth map.

2.2. The Outstanding Advantages of Our Model

According to the principle of our model for monocular depth estimation in Section 2.1, we could clearly see that the most outstanding advantage of our model was that depth map was predicted through unsupervised monocular depth rather than supervised monocular depth. As supervised learning-based monocular depth estimation requires vast quantities of corresponding ground truth depth data, it is difficult to carry out training. However, unsupervised learning-based monocular depth estimation can be trained with easier-to-obtain binocular stereo footage. In addition, a more accurate depth map was predicted by our model thanks to four outstanding innovations, which are as follows: First, the pyramid processing for input image was proposed to build the topological relationship between input image size and depth of input image, which could improve the sensitivity of depth information from a single image and reduced the impact of input image size on depth estimation. Second, the residual neural network of coarse–refined feature extractions for corresponding view reconstruction was designed to improve the accuracy of feature extraction and solve the contradiction between the calculation time and the number of network layers. In addition, to predict high detail output depth maps, long skip connections between corresponding layers in the neural network of coarse feature extractions and deconvolution neural network of refined feature extractions were designed. Third, the loss of corresponding image reconstruction based on the structural similarity index (SSIM), the loss of approximate disparity smoothness and the loss of depth map were united as a novel training loss to better train our model. Four, the depth map was more accurate and reliable based on the mature and reliable principle of monocular depth estimation compared with predicted direct disparity.

2.3.1. The Pyramid Processing for Input Image

In this section, we show an extensive experiment for evaluating the performance of our proposed model. We evaluated our approach on the raw sequences of the KITTI benchmark which is a popular dataset for single image depth map prediction. To demonstrate the effectiveness of the proposed unsupervised monocular depth estimation model, we compared the performance of our model to both the supervised and unsupervised single view depth estimation method in Section 3.3.1. In Section 3.3.2, several factors affecting the performance of monocular depth estimation were discussed and analyzed as follows: (a) We compared our model in which the input images were processed by the pyramid method with the one that the pyramid method had not used, thereby demonstrating that input images processed by the pyramid method could improve the sensitivity of depth information in monocular images and reduce the influence of input image size on the estimation result. (b) To test the outstanding advantages of residual neural networks, we compared the performance of our residual network with VGG-16 in our model. (c) Our model was compared with the one without long skip connections between corresponding layers in the neural network of coarse feature extractions and the deconvolution neural network of refined feature extractions to show that long skip connection can predict high detail output depth maps. (d) To reflect the superiority of our proposed loss function, our novel loss function was compared with other well-known training losses. In addition, to verify the cross-dataset generalization ability of our model, our model and other monocular depth estimation methods were tested on Make3D that consisted of RGB/depth pairs in Section 3.3.3. Finally, the real outdoor scene was used to testify the superior performance of our model in Section 3.3.4.

The drone shown in the Figure 7a was assembled with flight control of open source Pixhawk and related components of the drone. Given the technical packaging, drones on the market are not conducive to secondary development. NVIDIA Jetson TX2, an AI computer in the embedded field with a six-core Tegra processor and 256-core Pascal architecture GPU was installed on the drone. The connection between NVIDIA Jetson TX2 and the drone is shown in Figure 7b.

Following previous work, we adopted the following evaluation metrics to quantitatively assess the performance of our unsupervised monocular depth estimation model. Specifically, we considered:
Average relative error (REL):
Root mean squared error (RMSE):
Average log10 error (log RMSE):
And threshold:
The percentage of pixels in the number of pixels that satisfy the condition that where is the ground truth depth, is the predicted depth, N is the sum of the pixels of all test images.

It took 36.5 h to train our model with the computer and parameter set in Section 3.1 and each image took about 0.05 s. The specific results of the training loss are shown in Figure 8, in which we can clearly know that the loss of each part oscillates slightly and tends to stabilize and the total loss drops to around 0.4 after multiple training. It was found that the training effect based on the unsupervised monocular depth estimation model proposed in this paper was excellent.

3.3.3. Generalizing to Other Datasets

To illustrate that our model could generalize to other datasets, here our model was compared with the state-of-the-art methods, including monocular depth estimation based on supervised learning and monocular depth estimation based on unsupervised learning on the Make3D [29] that consists of only RGB/depth pairs and no stereo images. Using our model only trained on the KITTI dataset, we tested it on the Make3D. The experimental results are shown in Table 4. The following conclusions were obtained according to the comparison of Table 2 and Table 4: First, the depth estimation accuracy of our model trained by KITTI dataset on KITTI was higher than that of Make3D. Second, the accuracy of the monocular depth estimation of our model was higher than the other methods, where it resulted in 0.328 REL, 7.529 RMSE, 0.348 Log RMSE.
Figure 10 gives qualitative results of our model on test images of Make3D. Qualitatively, our model could capture the general scene layout and object such as cars, trees well in images that shared similarities with the KITTI dataset. According to the Figure 10 and Table 4, the conclusion we could draw was that our model has excellent generalization ability.

We declare that we have no financial and personal relationships with other people or organizations that can inappropriately influence our work, there is no professional or other personal interest of any nature or kind in any product, service and/or company that could be construed as influencing the position presented in, or the review of, the manuscript entitled. 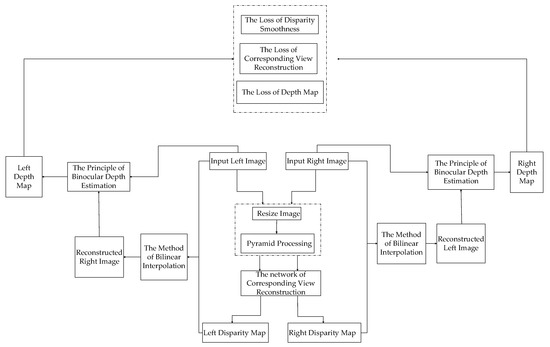 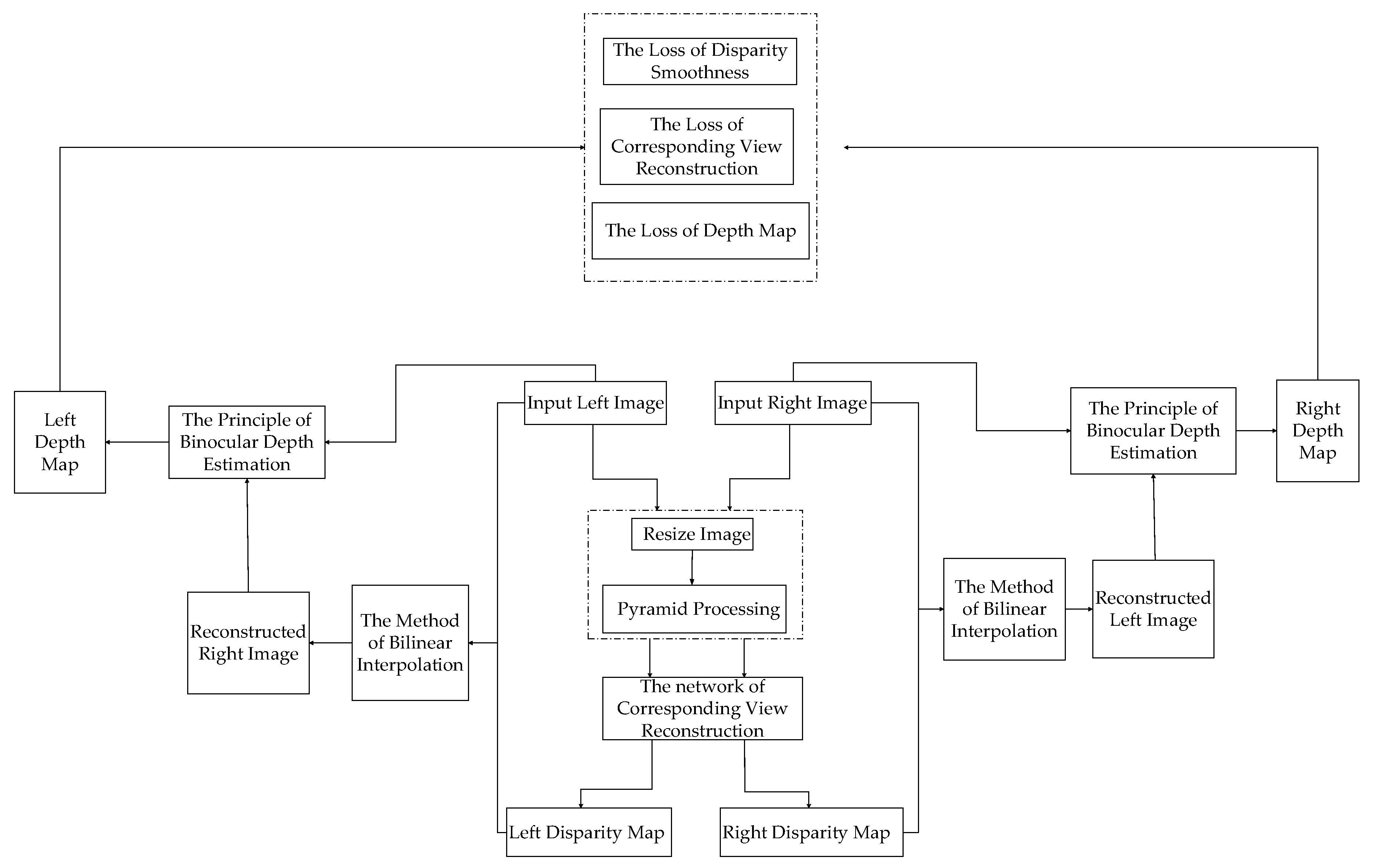 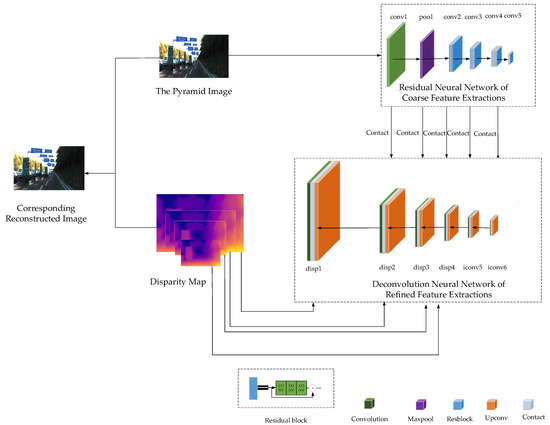 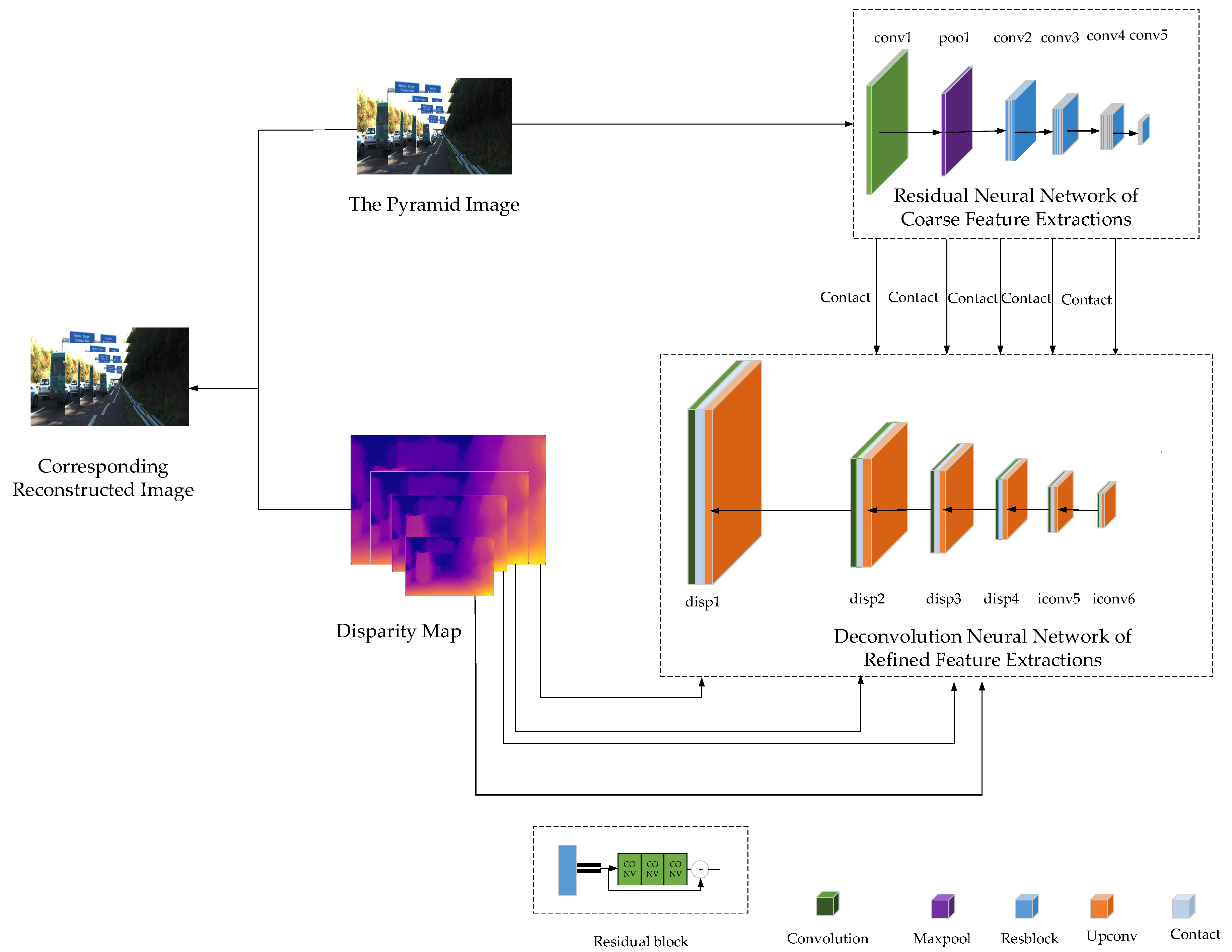 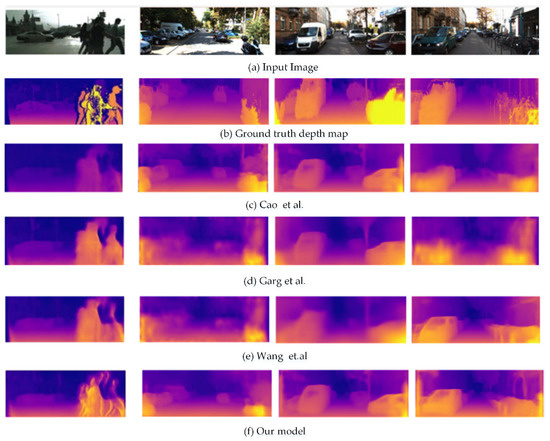 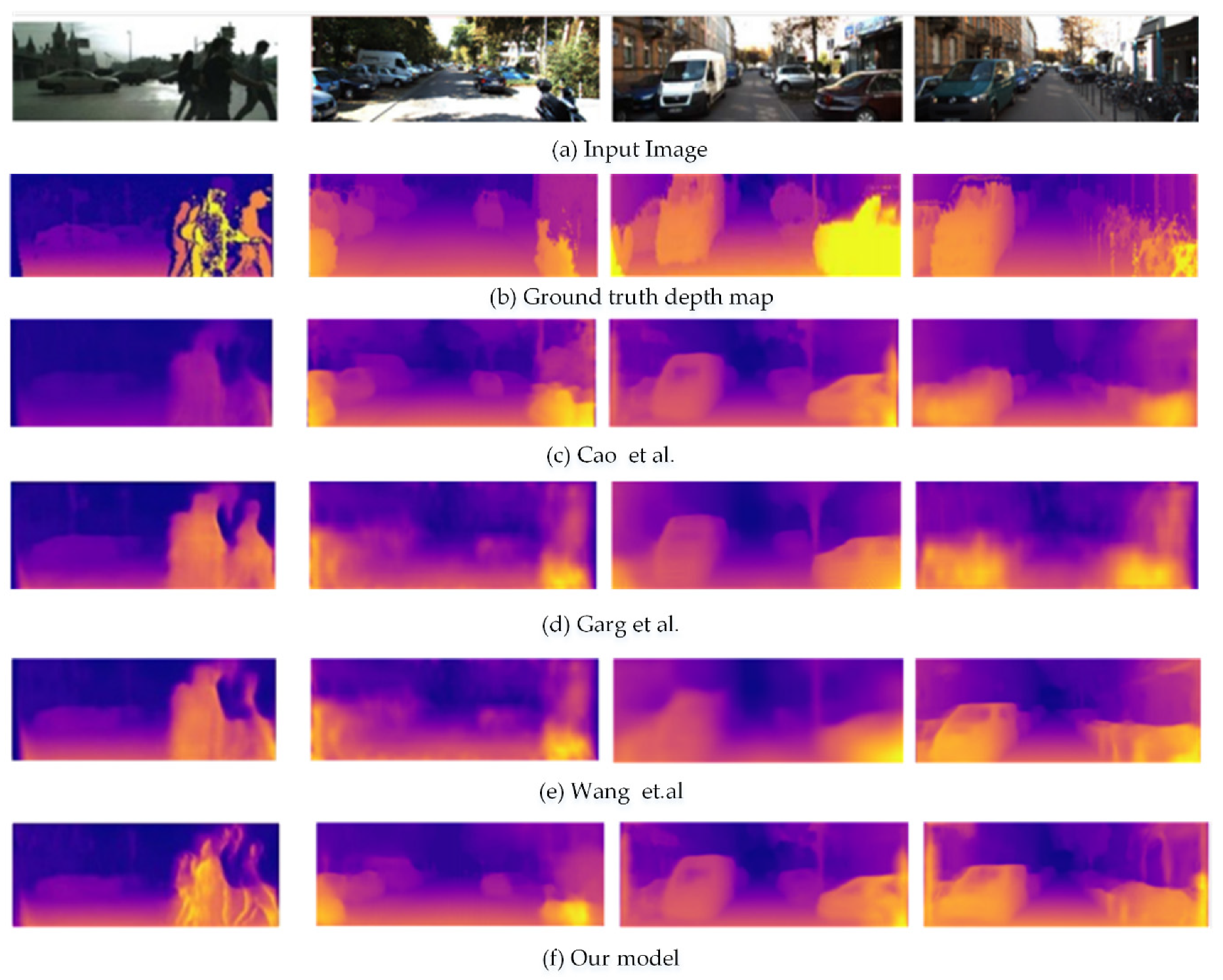