Modern video display terminals commonly use digital video signals. Transition minimized differential signaling (TMDS) coding implemented in video signal transmission using DVI (Digital Visual Interface) standard is commonly used. The aim of the coding scheme adopted by this solution is to eliminate the constant component of the electrical signal, increase the resistance to electromagnetic (EM) interference, and reduce electronic interference between cables. Professionals and hobbyists interested in the problems relating to protecting information against electromagnetic infiltration believe that TMDS coding, in contrast to the VGA (Video Graphics Array) analogue standard, significantly improves the electromagnetic security of processed graphic information. This paper shows a comparison of the abovementioned standards in terms of information protection against electromagnetic infiltration. The paper presents the results of computer simulations and studies dealing with practical compromising emanations for DVI standard and its susceptibility to electromagnetic radiation spying. The obtained results show that the commonly expressed ideas of digital standards being fully secure are false. The obtained test results show that the level of electromagnetic protection can be increased by using appropriate pairs of colors for the text and background. This solution has to be connected with a mode that smooths the edges of graphic signs. Then, the number of frequencies in which valuable emissions exist can be limited. In this paper, pairs of colors for which the level of protection of information can be increased are shown. The authors present their analyses on the basis of the method of colors. The method is connected to possibilities of selection of smoothing modes of edges. As Windows is the most commonly used system in classified work stations (so-called TEMPEST computers), this operating system was considered from the viewpoint of the protection of processed information. View Full-Text
Keywords: pattern recognition; image and signal processing; graphic information; DVI and VGA standards; Transition Minimized Differential Signaling; compromising emanations pattern recognition; image and signal processing; graphic information; DVI and VGA standards; Transition Minimized Differential Signaling; compromising emanations
►▼ Show Figures 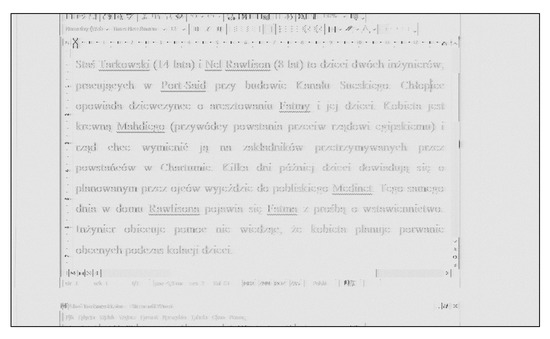