On the Implementation of the IEC 61850 Standard: Will Different Manufacturer Devices Behave Similarly under Identical Conditions?
Previous Article in Special Issue

A two-dimensional layer of carbon atoms known as graphene [1] has been investigated widely both theoretically and experimentally. Graphene has a unique band structure for which the electron and hole bands meet at two inequivalent points in the Brillouin zone. At these Dirac points, the electrons behave like quasi-particles according to the massless Dirac equation, which leads to a linear dispersion relation. The analogy between the electron wave nature in graphene electronics and the electromagnetic waves in dielectrics has suggested a series of optical-like phenomena, such as the Goos–Hänchen effect [2,3], negative refraction [4], collimation [5], birefringence [6], and the Bragg reflection [7] reported in recent papers.
Another analogy is the graphene-based electron waveguides [8,9,10,11,12,13,14,15,16,17,18], which will be useful for various graphene-based devices, such as electronic fiber [19]. The crux of such an electronic waveguide is the confinement of Dirac fermions in graphene. There are many schemes to confine electrons in graphene, e.g., electric confinement [20,21], magnetic confinement [22] and strain-induced confinement [16,17,18]. By having a quantum well in graphene to confine massless Dirac fermions, the guided modes in graphene-based waveguides with quantum well structure induced by an external electrical field have been investigated in detail [8,9,10]. Experimentally, gate-controlled electron guiding in graphene by tuning the carrier type and its density using local electrostatic fields has been achieved [12]. However, the confinement of the quasi-particles is not strong enough due to the Klein tunneling.
Another effective way to confine the electrons in graphene is by applying a uniform magnetic field [22] and the characteristics of magnetic waveguides in graphene have also been studied [13,14]. Recently, the strain-induced graphene waveguides has also attracted much attention [16,17,18]. Contrary to the electric or magnetic waveguide in graphene, the strain-induced waveguide confines electrons without any external fields. It confines the quasi-particles with the pseudo-magnetic field [23], which arises from the applied mechanical strain. The bound states of the strain-induced waveguides are dependent on the valleys, which is different from the electric and magnetic waveguides (valley independent). Furthermore, smooth one-dimensional potential [15,24,25,26] and velocity barriers [27] have been proposed to confine the Dirac fermions in graphene. Electrons can also be guided in nano-structured graphene, such as graphene nano-ribbons [28] and antidot lattice [29]. Recently, Allen et al. demonstrated the confinement of electron waves in graphene with the use of superconducting interferometry in a graphene Josephson junction [30].
For a given graphene waveguide with quantum well structures, the dispersion equation for its guided modes is normally determined by applying the continuity of wave function at the interfaces of the quantum well. This method is easy for one quantum well structure, but not for multiple or more complicated quantum well structures, e.g., a double-well potential. In this paper, we will apply a transfer matrix method [31,32,33] to deduce the dispersion equation for guided modes in a double-well potential structure. From the calculation, we will present the characteristics of the guided modes in detail, and report its novel properties as compared to other graphene-based waveguides.
In the present work, we focus on the properties of guided modes in a double-well asymmetric potential that acts as a slab waveguide for electron waves (based on Dirac solution) in a form similar to that in integrated optics. However, it should be noted that the optical properties or optical waves in graphene have also been investigated [34,35,36,37,38,39,40,41]. This work shows an analogy between the electron wave nature in graphene electronics and the electromagnetic waves in dielectrics.

2. Guided Mode and Dispersion Equation for a Double-Well Potential

In the presence of an electrostatic potential V(x), electrons inside a monolayer graphene can be described by the Dirac-like equation: where are the Pauli matrices, and m/s is the Fermi velocity. is a two-component pseudo-spinor wave function, and are the smooth enveloping functions for two triangular sublattices in graphene, which can be expressed as due to its translation invariance in the direction. In terms of , Equation (1) is written as
By using the transfer matrix method [31,32,33], we obtain a matrix M to connect the wave functions at the two boundaries at and : where , , . By solving Equation (3), one can immediately obtain the dispersion equation of a graphene waveguide (see below).
Here, we consider a double-well asymmetric potential for graphene waveguide as plotted in Figure 1a, where its potential distribution is denoted by
The proposed waveguide configuration can be realized by applying four gate-tunable potential barriers on single-layer graphene [42]. By tuning the applied voltage on the gate, a double-well asymmetric potential can be formed on graphene. For simplicity, we have unless it is specified elsewhere. In this model, we have neglected the microscopic details of the interaction effects such as the inter-valley coupling [43,44] and inter-valley scattering in the potential steps [44,45]. The electron wave incident into the quantum well (region 2) with an angle θ respect to the x-axis, and the guided modes are propagating in the y-direction. The critical angle of the incident electron waves from region i to region j is defined by where , E is the energy of incident electron and is the electrostatic potential in the respective region . The critical angle is shown in Figure 2 as a function of the incidence energy E for , , , , and .
For a given guided mode, there will be total internal reflection of electron waves at both the two interfaces of a waveguide. For example, at large incidence angles , total reflection occurs in a specific range (marked with “slanted lines”) as plotted in Figure 2. In this range, the electron waves will be reflected at the interfaces back and forth with an angle of in region 2 () with a guided wave propagating in the axis as shown in Figure 1b.
For the angle within in region 2 and the angle in region 3, which lies in a range marked with “vertical lines” in Figure 2, the electron waves will refract into region 3, and total internal reflection occurs at the interface . The electron wave will oscillate in the region of as shown in Figure 1c. It is important to note that there are no guided modes within , as there is no angle θ to fulfill the condition . Thus, there are only two types of guided modes in a double-well potential. The first one is the guided modes in , and the other is the guided modes in .
To derive the dispersion equation, the electron wave function in the double-well potential can be written as:
Here, we have , , , , , . And , , , , , .
Based on the transfer matrix method, we have: where , and .
By multiplying Equation (9) with matrix , we obtain
From Equation (10), we obtain the dispersion equation for the guided modes in a double-well potential, which is and , , , , and . The dispersion equation for the guided modes obtained with the transfer matrix method is more convenient than the usual method that solving the Dirac equations from the continuity of wave function at the interfaces of quantum wells. The dispersion equation (Equation (11)) obtained for the double-well asymmetric potential can be recovered to that of the symmetric quantum well-based graphene waveguide by setting and . Thus, we have which is the dispersion equation for a symmetric quantum well, as reported in Ref. [8]. Equation (12) can also be directly obtained by using the transfer matrix method:

3. Characteristics of the Guided Modes in a Double-Well Potential

This work is supported by the Singapore Ministry of Education T2 Grant No. T2MOE1401 and the U.S. Air Force Office of Scientific Research (AFOSR) through the Asian Office of Aerospace Research and Development (AOARD) under Grant No. FA2386-14-1-4020. 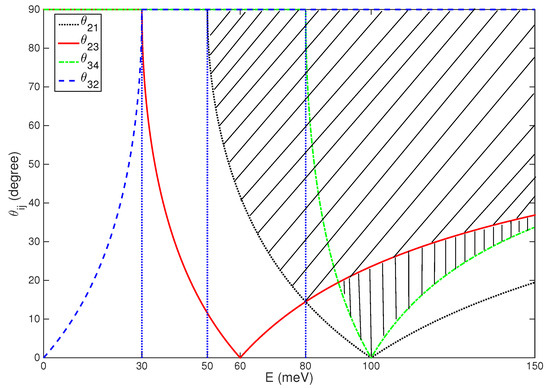 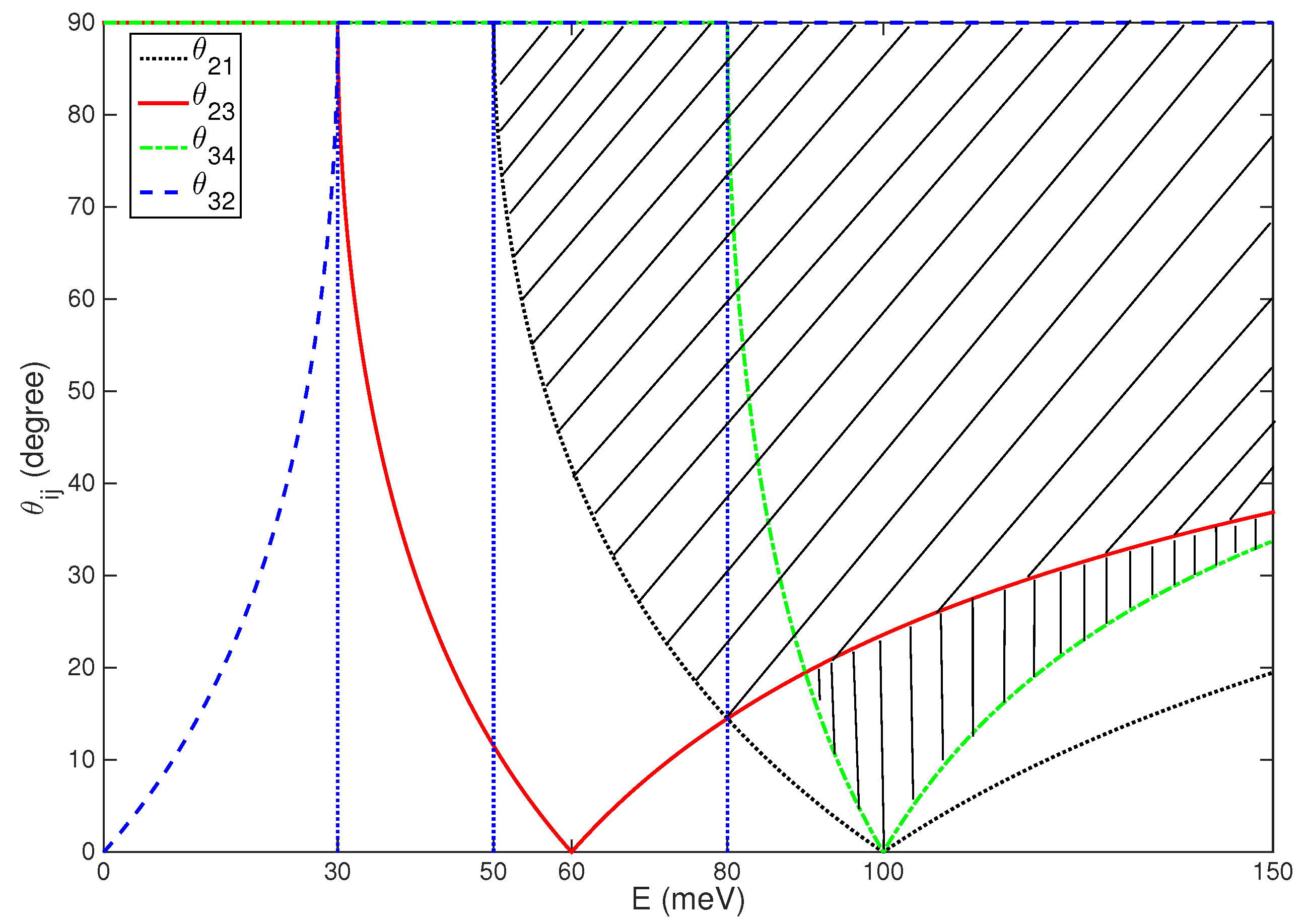 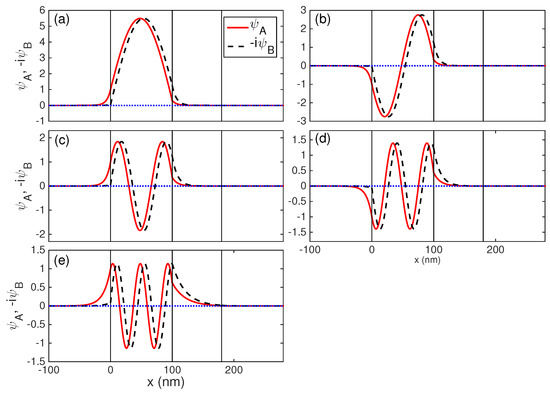 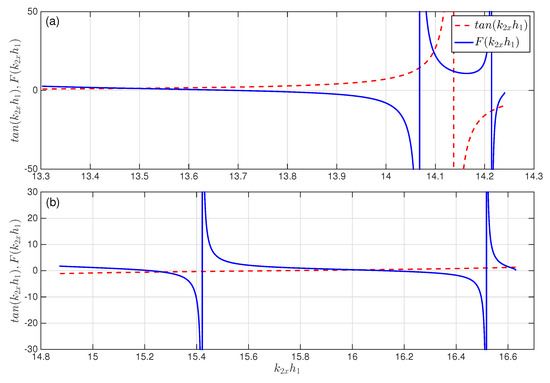 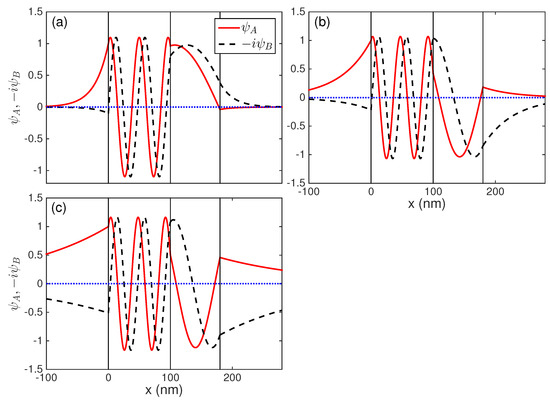 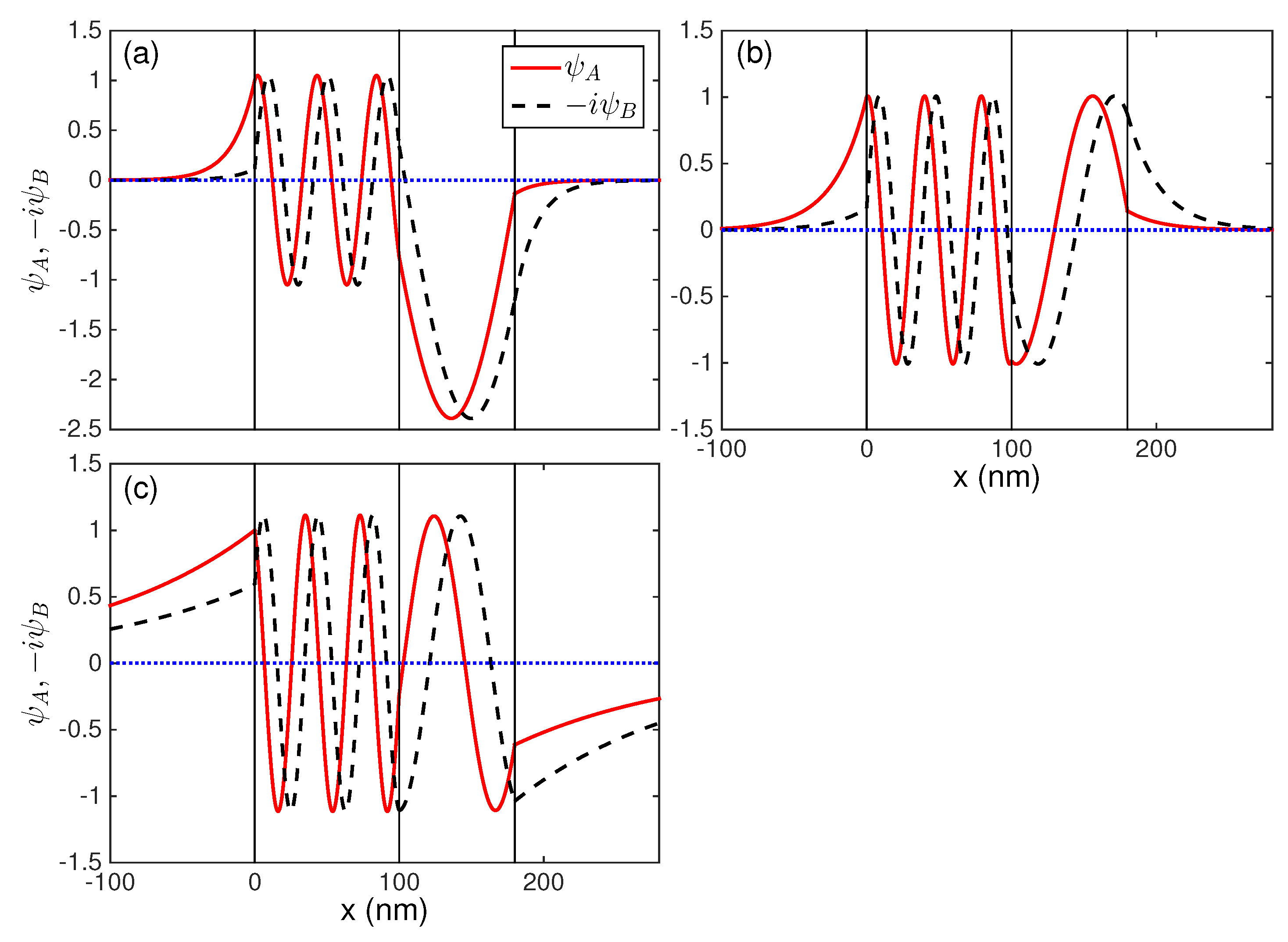 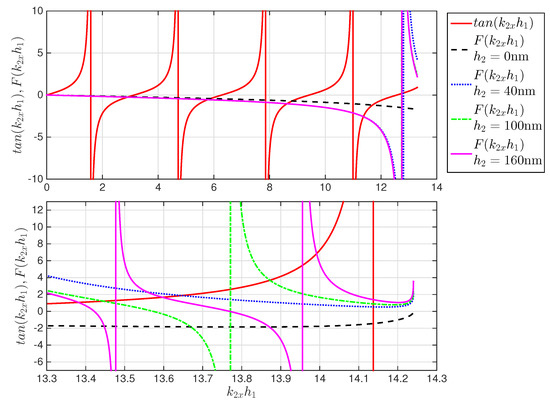