Bioglea as a Source of Bioactive Ingredients: Chemical and Biological Evaluation
Previous Article in Journal

Trans-retinoic acid, known as tretinoin, is a staple ingredient for people suffering from severe acne and other skin-related maladies [1,2,3]. As the acid form, retinoic acid is a very aggressive skin exfoliating agent that also has interesting skin-improving benefits. These include smoothing of the skin’s stratum corneum and thickening of the skin’s epidermis as well as effective restructuring of the underlying dermal and epidermal matrix proteins such as elastin and collagen. The ingredient is also used in many strong skin brightening formulations often in combination with steroids and hydroquinone [4]. Because retinoic acid is a known teratogen, its use is tightly controlled, and it can only be purchased with a doctor’s prescription.
Retinol has become a very popular proxy for retinoic acid. Retinol is a retinoic acid precursor that shares many of the same skin benefits as retinoic acid, but without the aggressive aspects often associated with the use of retinoic acid [5,6]. In addition, even milder forms of retinol are known, such as retinol esters like the very popular retinyl palmitate, that are much milder, do not share the teratogenic aspects of retinoic acid and can be sold in basic skin care products without a doctor’s prescription. As one moves from retinoic acid, to retinol and then to more milder forms such as retinyl palmitate, while the aggressive skin irritating effects are diminished, often the beneficial skin improving effects are tempered by the mildness of the retinoic acid derivatives. Nonetheless, retinol and its corresponding esters are very popular skin care active ingredients with well-established, clinically proven skin benefits.
Many people who use retinoid-based products will report that the active ingredient is irritating to their skin. However, this claim of irritation, as it relates to retinol and the retinol esters, is more anecdotal than factual. There are few vigorous clinical scientific studies that conclusively demonstrate that retinol, applied topically without occlusion, irritates the skin. One clinical study undertaken to show the advantages of a conjugated retinoid derivatives verses retinol at 1.0% and retinoic acid at 0.025% demonstrated some advantages in using retinol for skin hydration vs retinoic acid, noting that in early use, the retinol was more drying than the conjugated retinoid, but significantly less drying than retinoic acid [7]. In this study, however, the participants could continue to use skin moisturizers which may have influenced the skin hydration results.
Recently, a blend of polysaccharides with a demonstrated ability to control skin inflammation via reductions in release of active Caspase-1 from inflammasome-induced inflammation was shown to also have what appeared to be a profound ability to maintain skin hydration for an extend period of time after topical application [8,9]. Because retinol was expected to be somewhat aggressive to the skin, it was felt that examination of this blend of polysaccharides in a clinical study employing non-occlusively applied retinol formulations might be an interesting test of the polysaccharide’s ability to control inflammation and moisturize the skin. In this study, 22 individual forearms were employed to examine two formulations containing 0.5% retinol and to see how the formulations impacted skin barrier disruption (Transepidermal Water Loss (TEWLmeter), erythema (Chromameter) and hydration (Corneometer).

For this study, 11 volunteers (6 females, 5 males, ages 35–60, Fitzpatrick Skin Types II-III) were recruited to participate and each signed Informed Consent to participate in the study. All 11 volunteers allowed both arms to be employed in the studies which effectively allowed for examination of 22 individually treated forearms. Two skin lotion formulations were created for the study using the ingredients shown in Table 1 that were identical to the polysaccharides reported in the earlier studies [8,9].
The lotions were prepared immediately before the study began and were placed into air-tight pump dispensers to minimize as much as possible the potential air oxidation of the retinol over the course of the study. Individual forearms were marked with indelible ink with a spot as shown below in Figure 1.
The individuals were provided with two lotion bottles marked simply as Lotion 1 (in a black bottle) and Lotion 2 (in a white bottle). It was important for the individuals not to mix up the bottles or treatments which would take place at home during the 12 days of the study. For this reason, the bottles were differentiated by color and the participants were provided with a copy of Figure 1 to use as a guide. The participants were asked to apply approximately a dime sized quantity of product to each treatment site and to rub the product in well using separate fingers in an area of approximately 4 × 4 cm taking care not to place product into the areas of the control measurements or to cross over the indelible ink mark. The ink mark, which was maintained throughout the study, allowed constant control of testing site measurement locations.
Prior to commencing the study, baseline measurements were taken of each of the treatment and the control areas to establish a baseline for statistical analyses. For the entire study, the Cortex DermaLab Combo (Hadsund, Denmark) was employed using the instruments designed to measure Transepidermal Water Loss (TEWLmeter), Erythema (Chromameter) and Hydration (Corneometer) [10,11]. The instrument detectors were calibrated just prior to the study. The individual measurements were done in a temperature and humidity-controlled room set at 22–25 °C and 55–60% RH. Participants sat for 10 min prior to each set of measurements to allow their skin to equilibrate to the surrounding room temperature and humidity. After the initial baseline measurements were completed, each participant was provided with their lotions and shown how to carefully apply the products to each treatment site, how much product to use, and most importantly, how to rub the product in with separate fingers so as not to cross contaminate the formulations.
For the TEWL measurements, each site was tested four (4) times at different locations until a steady state reading was achieved at each site and the four values were averaged for a final TEWL reading. For the Chromameter measurements, the DermaLab instrument allows four individual readings which are automatically averaged by the instrument. The values measuring erythemal response (redness) were examined in this study. The Corneometer allows for eight individual measurements that are subsequently averaged by the instrument for a final hydration value. The measurements followed the pattern: TEWL, Chromameter, and then Corneometer.
During the study, the individuals took the products home and applied them 2X per day, in the morning after their washing routines and in the evening prior to going to bed. To keep as much standardization as possible in the study, the individuals were instructed not to use any surfactant-containing ingredients when rising the test sites, only warm water. Application of any other products was restricted including sunscreens (very important as the study took place over the Fourth of July Holiday) and other kinds of moisturizing products. Because the study was run on the inner volar forearm, the impact of potential UV radiation on the treated sites would also be minimized as compared, for example, to a study run on the face. In addition, all the volunteers noted that they would avoid any type of tanning activities during the length of the study. Each volunteer noted that they had not used a retinoid-containing product on their skin or orally in the last six months.
Final data were analyzed using Microsoft Excel statistical software which included Paired T-Test analyses. Prior to analyzing all datapoints, the individual TEWL, Chromameter, and Corneometer measurements were baseline normalized to account for the variations seen across the various treated and non-treated sites.
At the end of the 12-day treatment period, the individuals did one final application in the morning, and a measurement of all parameters was done in the morning. The individuals were instructed not to use surfactants or other products on their arms over the weekend and when they returned on Monday morning a final analysis of skin hydration was done on each treatment site. This allowed for a regression analysis of the treatments for skin moisturization.
To compare the results of the product treatments, the accumulated testing data was normalized to baseline measurements and the difference in the values of the final measurement, T(4), and the initial measurement, T(0), were determined. Statistical analyses were done on the baseline normalized values. After the completion of the regression study, a final moisture measurement, T(5), was completed and analyzed in a similar fashion.

Results from the measurement of erythema are shown in Figure 3.
While it appears that the placebo-treated site was starting to cause some possible redness compared to the control site (p = 0.068), the value did not reach statistical significance within the 12-days of the study. More importantly, if an erythemal response was occurring none of the volunteers noted or could see any indications of redness occurring on their skin. The Chromameter may have detected an early indication of a potential for erythema, but within the 12-days of this study, it was not significant enough to be measured.

This study examined the impact of formulations containing 0.5% retinol to see how the formulations impacted skin hydration, skin barrier function and skin redness over a 12-day application timeframe with product application 2X/day. It was found that formulations containing 0.5% retinol were not overly irritating or damaging to the skin’s barrier function over the 12-day treatment regimen. However, 0.5% retinol did prove to be very drying to the skin, a condition which upon longer application periods might begin to lead to some barrier disruption and skin irritation. It was found that a unique blend of polysaccharides previously shown to influence the skin’s innate immune response to external threats that prime skin cells NLRP inflammasomes (keratinocytes) to release active Caspase-1 was able to not only maintain skin hydration during the retinol treatments, but also to extend skin hydration out for 3-days after a final treatment and regression. The study supports an emerging hypothesis about how to build and maintain extended skin hydration by employing larger, natural, water-loving polysaccharides that can remain bound to the skin over extended timeframes.

The research was funded by BotanicalsPlus®.

The authors of the paper are all employees of BotanicalsPlus®. No other Conflicts of Interest are reported. The funders had no role in the design of the study; in the collection, analyses, or interpretation of data; in the writing of the manuscript, or in the decision to publish the results. 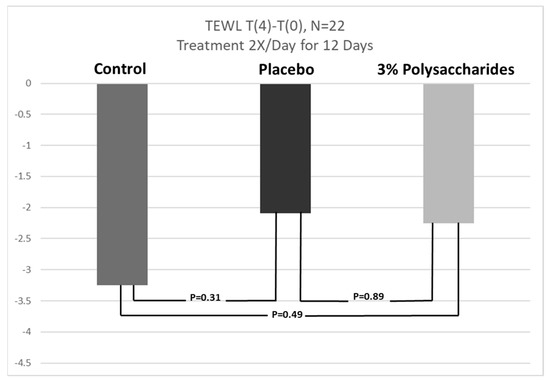 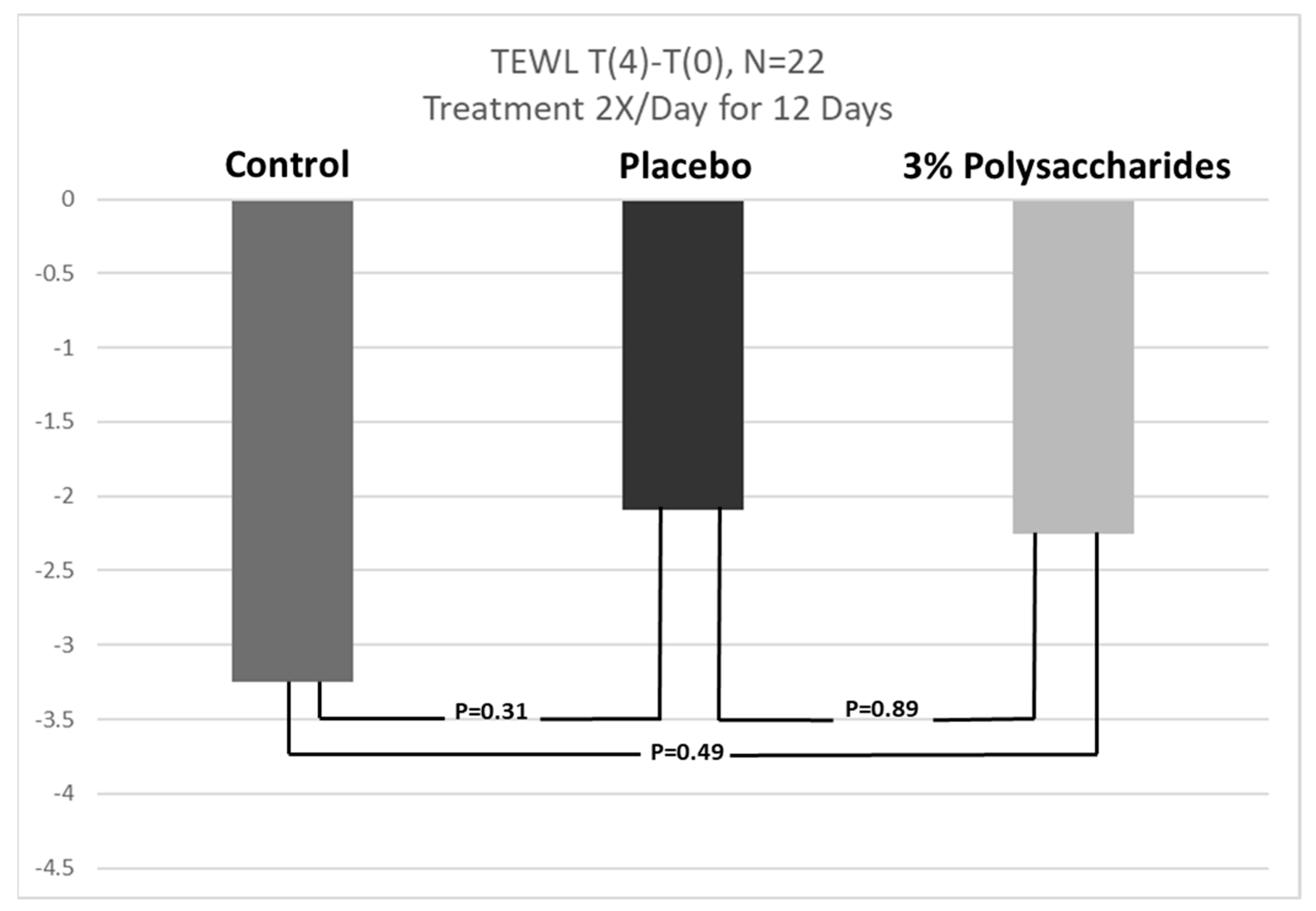 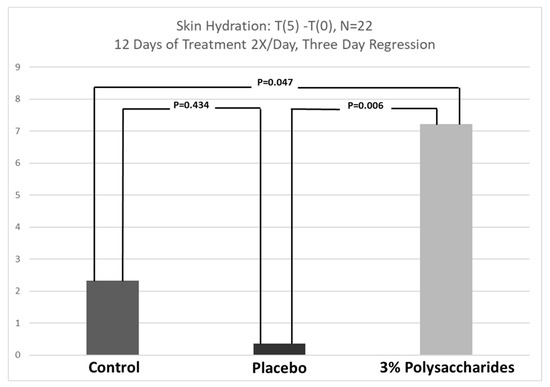