Applications for Marine Resources in Cosmetics

As a facial skin condition, oily skin causes cosmetic problems, such as large pores, shiny appearance, and the feeling of greasiness and heaviness. Furthermore, extensive sebum production leads to common skin disorders such as acne vulgaris or seborrheic dermatitis. This study investigated the efficacy of sebum control tonics containing Juniperus communis fruit oil, Pelargonium graveolens oil, or niacinamide. The effects of Juniperus communis fruit oil, Pelargonium graveolens oil, and niacinamide on sebum excretion rates were investigated using Sebumeter®. Sebum measurements (Sebumeter® SM 815, Courage & Khazaka®, Köln, Germany) were made on the skin surface in three places by applying the sebumeter probe to the forehead after 10, 60, and 120 min from application of the tonic. The results indicated that the application of the tonic maintained a lower sebum secretion 10 min and 60 min after the application of the cosmetic, compared to those before it. However, a visible sebum-reducing efficacy after 2 h was reported only for tonic containing 0.25% Pelargonium graveolens oil and for the tonic with the addition of 3% niacinamide. After 2 h, the values of sebum measurements were 44 ± 5.13 a.u. and 58 ± 9.07 a.u., respectively. Our results show that the tonic with the addition of 0.25% Pelargonium graveolens oil is the most effective in reducing sebum production. View Full-Text
Keywords: sebum; sebostatic activity; essential oil; niacinamide sebum; sebostatic activity; essential oil; niacinamide
►▼ Show Figures 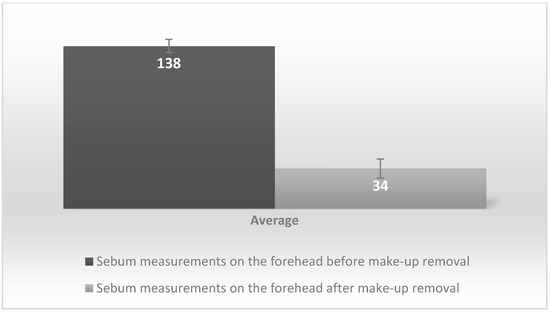