Modeling Competition between Countries in the Development of Arctic Resources

The article is devoted to the approaches that can be applied in the distribution of Arctic resources between the main reference countries of this region. The objective economic nature of the problems that arise in this region makes it possible to characterize them as a competition of claims for a limited and potentially dynamically changing resource. At a formal level, this problem has a general nature and it is typical for many areas of modern economy. At the same time, it is impossible to deny its specifics, which imposes significant restrictions on possible methods of solution. In recent years, problems in the sphere of interstate cooperation under conditions of limited resources have significantly increased. In such a situation, scientific and practical research in the field of mechanisms for regulating the relations between the parties (economic entities) becomes interesting. In analyzing the mechanisms of distribution of limited resources, one can use the theory of cooperative games, mathematical models of resource rationing, as well as works on the study of problems of equitable distribution (s.c. Fair Divisions). In the framework of such tasks, the range of applicants for limited resources can be limited to countries or regions directly adjacent. The process can be include of “external players” who have sufficient investment potential. The subsequent development and analysis of the problems of regulating intercountry interaction are associated with mathematical formalization. Such formalization presupposes a description of the situation of competitive interaction between countries in the form of a stochastic cooperative game. An analysis of possible concepts for the solution of this game will lead to meaningful conclusions about specific schemes (mechanisms) of rationing.
Keywords: Fair Divisions; cooperative games; resource allocation; cooperative stochastic games Fair Divisions; cooperative games; resource allocation; cooperative stochastic games

Problems of rationing become relevant in situations where the volume of claims by interested parties relative to a certain resource exceeds its volume.
The focus of this study is on the practical aspects of applying various methods (schemes) for solving problems of distribution-limited resources. In the context of Arctic region problems, it will primarily be mineral minerals, oil and gas.

The results obtained by each method can demonstrate the best distribution of requirements across the selected resource types. The participants of the game (countries or their associations) will receive the volume of resource (oil, gas and other resources) that meets the specified requirements (on the basis of the chosen rule). Thus, the solution of the problem will be an equitable distribution of resources under the given economic conditions.
Solving the problem of distribution of rights to the Arctic resources under the current economic conditions is an urgent task. None of the researchers can say exactly what rights a particular country or region has to a particular type of resource. Nevertheless, the proposed game models allow us to illustrate the diverse situations that may arise under the conditions of inter-country competition. These models will help to examine in detail the impact of countries’ positions on the results of the actual distribution of rights to limited resources in the future.
Note that the need for such a situation may arise in various sectors of the economy; however, the situation of resource allocation in the Arctic region is relevant. Currently, the solution of such problems for resources in the disputed territories, which became available in connection with the development of new technologies and improvement of technology, is becoming increasingly important.
As a conclusion, it should be noted that the purpose of interaction between the state today is to create conditions for sustainable operation, the preservation of solvency and the formation of comfortable conditions for the existence of citizens. For this domestic purpose, most states are doing well, but their position in the external environment has a serious impact on the internal policy of the state.
The concepts of a monopolar world today do not lose their relevance. The immediate centre of this monopoly remains a big question. If a few years ago the absolute leader was recognized by the United States, today their positions have significantly deteriorated.
The question of maintaining a monopolar world remains a big question, the concept of a multi-polar world seems more obvious, where the most likely contenders for the role of the leading powers are several—the US and China, Russia and Europe, which can seriously resist them.
What coalitions can be formed? At present, it is obvious that America is striving to create a multipolar world, but having lost its position, gives way to other participants, such as China, which has long maintained neutrality, but with a serious strengthening of the negative influence of the United States and attempts to influence its policy, decided to apply the policy of creating a coalition with other powers, in particular with Russia. Such a game (when it comes to the theory of games) makes it clear that the center, though retained by the United States, already significantly begins to outweigh the united coalition (Russia and China).
Today, Russia, even under the most optimal circumstances, will not be able to become the center of the monopolar world due to the weakness of its influence on all emerging coalitions.
At the same time, in any situation, each of the participants (USA, Europe, Russia, China) will seek to create a coalition with other participants to strengthen their positions to create a stable situation for themselves.
These trends also have an impact on the achievement of specific objectives in the area of equitable distribution of resources, including in the area of claims by states that do not have territorial points of contact with resource sources.

The authors contributed equally to this work. P.K. сarried out the formation of the model, as well as the construction and selection of rules for determining the distribution. In the implementation of practical calculations, they obtained results by the method of the Talmud. V.H. carried out the selection of data and practical calculations in the implementation of the assessment of the distribution of countries in the Arctic region using the proportional method, the method of uniform income and a single method of loss. A.T. carried out the systematization of the material and the construction of graphical visualization of solutions to the problem of distribution of resources of the Arctic, obtained by various methods of rationing.

The paper is based on research carried out with the financial support of a grant from the Russian Science Foundation (Project No. 14-38-00009, the program-targeted management of the Russian Arctic zone development) and Peter the Great St. Petersburg Polytechnic University. 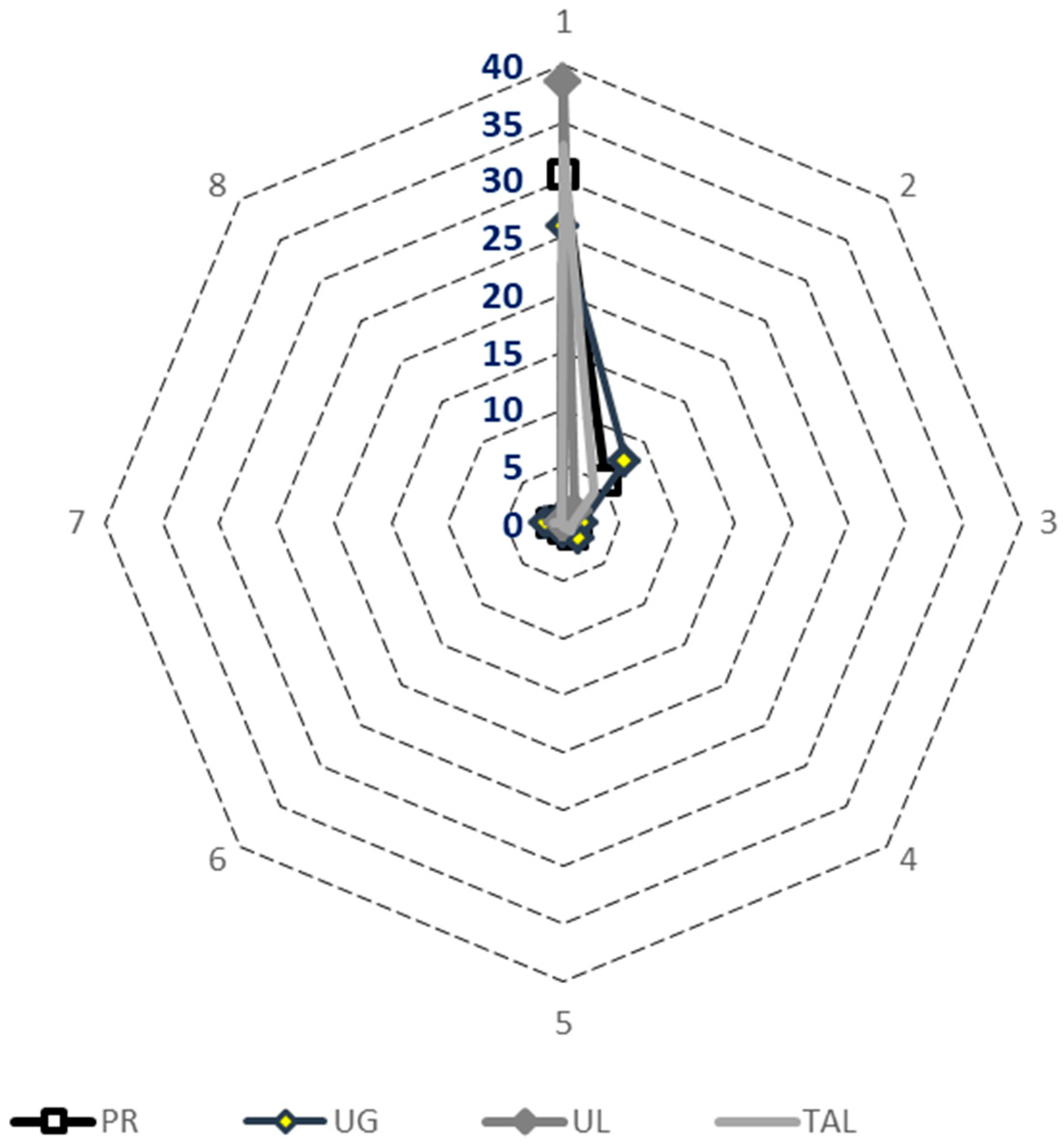