Mine Sited after Mine Activity: The Brownfields Methodology and Kuzbass Coal Mining Case
Next Article in Special Issue

The Social Cost of Sub-Soil Resource Use

Olga A. Konnikova
2 and

This study is conducted on data obtained from 10 enterprises working in the Arctic zone. It was based on a complex of quantitative information (accounting data, primary accounting data, production information, etc.) and qualitative information (in-depth expert interviews with management representatives of each company). The obtained results were processed using MS Excel. Let’s consider the changes in the design process during the transition from CNC to additive technologies (Figure 2) [51,52,53].
Abbreviations in this figure stand for: CNC—machine tool with computer numerical control; CAD—computer-aided design; CAE—computer-aided engineering; CAO—computer-aided optimization; CAM—computer-aided manufacturing. According to Figure 2, testing the processability is completely excluded from the design process, because the principle of formation of additive technologies implies the possibility of obtaining almost any form layer-by-layer [54,55]. Software and hardware can obtain a form without human intervention, which makes it possible to completely abandon staff units such as production engineer and to reduce the cost of the final product.
Following the design phase, the production stage will also undergo significant changes [56,57]. Since the production process is almost impossible to universalize from a structural point of view, it will be easier to visualize changes through a model of production cost formation. In the enlarged form, the formation process of the production cost can be represented by the following additive model: where:
According to Model (1), each of the elements will undergo a change, since additive technologies assume fundamentally different materials. Moreover, this material has a much greater return on production waste, which is also due to the principle of formation. In this case, waste recycling is almost identical to that when using casting technologies [58,59]. The additive devices themselves also have their own characteristics, which certainly affects the cost of their operation. The structure of labor costs will also change, since the additive installation management process is much less labor-intensive than the CNC control process [60]. Similar issues are also raised in [61,62,63]. A more detailed visualization of the structural changes can be seen in the extended additive model of the formation of the production cost: where:
The presented model formed the basis of the study methodology. Conducted quantitative studies and in-depth expert interviews made it possible to identify changes in the structure of this model during the transition to additive technologies, as well as the causes of these changes and key problems associated with them. The results of this comparison are presented in the next part of the paper.

Considering the model, the cost of the material (Cm) consists of the cost of its acquisition (Cm1), logistics costs (Cm2), the cost of additional processing (Cm3) and the irreversibility of waste and rejects (Cm4). Industrial additive installations assume the use of specialized materials of powder type; their cost considerably exceeds the cost of classical materials, due to the insufficient volume of their production. The situation with industrial costs is ambiguous, since on the one hand, the process of storage and transportation is greatly simplified due to the greater variability of the transported volume, but on the other hand the number of their producers is quite few [64,65,66]. At the same time, the cost of additional processing is much lower, since there is no need for preliminary preparation of the material and the formation of blanks. The irreversibility of waste and rejects is much lower than in classical methods of metal-forming. In fact, the recyclability of waste and rejects can reach 100%. So,
With the general changes in the ratio between the elements of material costs, the composition of these costs does not change. Labor costs change insignificantly in terms of composition and structure. Processing time is an extremely variable indicator, unsuitable for comparison. Auxiliary time in the case of additive technologies will be significantly lower, since the production process is more automated [67,68]. Time for preventive maintenance, time for rest time and personal needs, as well as time for preparation and finish works remain virtually unchanged. So,
The method for calculating electricity costs (Cel) retains the main mechanism, but load factor and efficiency of the electric engine are replaced by alternative indicators for the additive installation [69,70]. The energy consumption of modern additive installations is comparable to the energy consumption of CNC equipment:
Cel-additive ≈ Cel-CNC
Cost items related to material consumption and planned replacement of the coolant are completely eliminated and are replaced by alternative indicators for runout of structural elements of the additive installation (Pad) (for example, an extruder). Since these elements are much more unified and durable, lower costs should be assumed:
Pt + Pc ≥ Pad
The cost of annual depreciation of the additive installation (Cd-ad) will be much higher, since its cost significantly exceeds the cost of alternative CNC equipment, even though it is necessary to purchase ancillary equipment:
Cdm + Cda ≤ Cd-ad
Other elements of the model remain unchanged. We see that the change in the composition and structure of the production costs is rather ambiguous. The enterprise can achieve a reduction in material costs only under conditions of a significant percentage of rejects and industrial waste. The company can achieve a reduction in labor costs only if the processing time is shortened, which is possible only in the case of geometrically complex products that are impossible to manufacture on CNC equipment [71]. The company can achieve lower equipment costs only if the additive installation has a longer useful lifetime. It can be concluded that the decision to integrate additive technologies into industrial enterprises operating in the Arctic zone is complex and ambiguous. This decision depends on many factors, and the result is subject to a high level of uncertainty. Therefore, the issue of forming an instrument for assessing the investment attractiveness of such a transition is extremely urgent. The authors’ aim is to form a tool to determine the level of investment attractiveness of integration of additive technologies in the manufacturing process of an industrial enterprise operating in the Arctic zone.

The specificity of the object makes the use of any common evaluation method ineffective. An accurate and adaptive model for assessing the prospects of investment attractiveness of integration of additive technologies cannot be based on purely statistical or exclusively expert information. The impossibility of using statistical methods of assessment is determined by the impossibility of obtaining a sufficient amount of empirical material for the formation of a reliable research base. On the other hand, expert methods carry subjective features, which greatly increase the risk of expert error. Increasing the accuracy of the results of estimating such phenomena lies in the field of applying the theory of fuzzy sets. Its methods are based on a system of expert assessments; however, unlike statistical and expert estimation methods, they make it possible to consider the level of uncertainty by using the membership functions (μ (x) ∈ (0, 1)) of a subset to a given set. Methodologically, the use of this modeling approach is limited by the need to involve a wide range of experts. In this case, the experts were representatives of the management system of 10 Arctic zone enterprises who were previously involved in this study.
The investment attractiveness of the integration of additive technologies is assessed on the basis of a system of indicators built on a hierarchical basis and defined in different measures. The first level of the system is presented by aggregated criteria, the aggregate interaction of which synergistically affects the level of investment attractiveness. It is proposed to use a cost approach, and to measure investment attractiveness through the potential for cost reduction. The second level of the system is represented by specific indicators that affect one or another criterion. These indicators describe the state of both the external and internal environment of an industrial enterprise operating in the Arctic zone. At the same time, they include both statistical and expert values. The system of these indicators is presented in Table 1.
The model has two linguistic variables:
Variable No. 1—level of investment attractiveness of integration of additive technologies in the manufacturing process of an industrial enterprise operating in the Arctic zone;
Variable No. 2—the level of each private indicator (20 indicators). The term-set of each linguistic variable consists of 5 subsets:
Linguistic variable No. 1:
Linguistic variable No. 2:
Each indicator is assigned its own level of significance (ri). In accordance with the hierarchy of the system, it was established that indicators of the first level are of equal importance, since each of them characterizes a separate component that affects the integral indicator and cannot be considered in isolation from the others. The indicators of the second level are equally significant to the indicators of the first level; therefore, the significance shares are evenly distributed within each group. Figure 3 shows the hierarchical system of influence of indicators, together with the established significance of each of them.
As a classifier for the level of attractiveness of additive technologies integration, we take the most commonly used standard, the five-level 01-classifier by Nedosekin A.O., where the membership functions are trapezoidal triangular numbers [72]. This classifier has 5 node points, in which the value of the membership function is equal to one (0.1, 0.3, 0.5, 0.7, 0.9).
For each of the private indicators, a classifier of current values is generated. These classifiers are built on the basis of statistical information by industry, and the distribution criterion is the frequency of the hit of the indicator value in the interval. If the indicator is expert, the classifier is built on the basis of expert review.
Based on the results of the calculation of each of the private indicators, the recognition of their values by the criterion λij ∈ (0, 1) is carried out. Based on the results of recognition of the values of private indicators, an integral indicator of the level of investment attractiveness of integration of additive technologies in the manufacturing process of an industrial enterprise operating in the Arctic zone is calculated. The obtained integral indicator is linguistically interpreted, similarly to private indicators. In the end, we get an interpretation of the level of perspectiveness of integration of additive technologies and the degree of confidence of the researcher in this interpretation.

In the article, the issue of changing the composition and structure of production costs at an industrial enterprise operating in the Arctic zone while integrating additive technologies is considered in detail. It was found that the transition to additive installations will make it possible to abandon at least one staff unit—the production engineer—which will significantly affect the cost of product design. At the same time, production cost can change ambiguously. In this regard, a fuzzy model was developed to assess the level of investment attractiveness of the integration of additive technologies in the manufacturing process of an industrial enterprise operating in the Arctic zone. This model consists of a set of indicators that fully reflect the prospect of reducing the production costs. The linguistic interpretation of the final result makes it possible to answer the question of whether an enterprise should invest in a technological transition, and the linguistic interpretation of the intermediate results will help to understand why to do it. Further development of this model is its approbation. Based on the results of the approbation, it is supposed to clarify the fuzzy-logical classifiers of private indicators, as well as the specification of their composition and weights. This model will be useful for developed industrial enterprises operating in the Arctic zone, considering the integration of additive technologies, and for researchers in the field of advanced manufacturing technologies.

The funders had no role in the design of the study; in the collection, analyses, or interpretation of data; in the writing of the manuscript, and in the decision to publish the results. 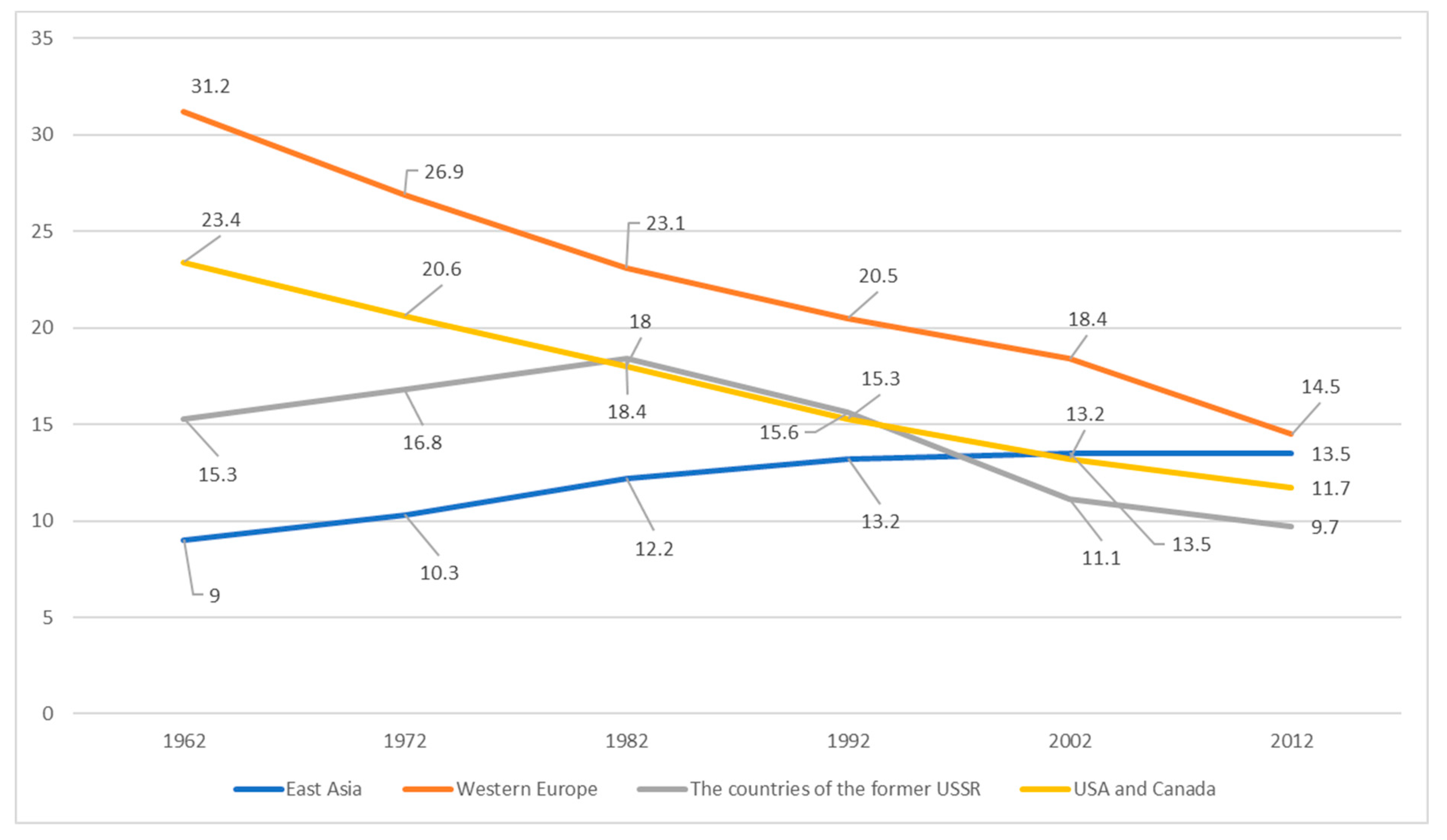