A Case for Security-Aware Design-Space Exploration of Embedded Systems

There is a growing need to sense very low levels of current in many biosensors and diagnostics applications [1,2,3]. Current levels in such applications can be as low as picoamperes (pA) which are harder to detect using CMOS circuitry due to circuit noise. Several readout circuits have been developed for low current sensing. For example, an integrator or a transimpedance amplifier (TIA) has been employed to convert the current signal into a voltage signal, followed by quantization of the converted voltage signal. However, with the current in the pA range, if the integration method is adopted, it would take a long time to accumulate the small current into measurable voltage signal [4]. If a TIA is employed, the feedback resistance must be large enough (i.e., gigaohms range) to obtain high gain and there is a trade-off between achieving high dynamic range and achieving low input-referred current noise. Moreover, such a large feedback resistor cannot be reliably realized on-chip and must be externally connected. A high-value active pseudo resistor made using off-state transistors have been widely used for small current sensing [5,6,7,8]. However, the resistance is inversely proportional to the input current, which leads to a variable current gain and bandwidth applications [9].
In most applications, the small current signal needs to be amplified at high speed in bandwidths excess of 1 MHz. One such application is for nanopore sensing where the transient activity is in microseconds with Femto ampere current levels. A current conveyor is commonly employed for current amplification; however, the conventional current conveyor is not suitable for the small current amplification since the bias current of the conveyor leads to large input-referred current noise [10,11]. No-bias current conveyor has been adopted for low-noise current sensing [12]. The noise levels achieved may still be prohibitive for low current sensing. A current preamplifier was presented, featuring a matched double-MOS architecture around an amplifier to obtain current amplification in [13]. Capacitors with the same current ratio are needed to increase the bandwidth. The fixed current amplification gain leads to a smaller dynamic range. In this paper, a current preamplifier with a programmable gain is proposed to obtain bidirectional current amplification. The programmable current gains setting enables one to achieve a higher overall input dynamic range. Higher gain allows for faster operation for small input currents while lower gain avoids saturation of the integrator stage for large input currents. Thus, the variable current gain enables a wider input dynamic range. Note the input dynamic range is defined as the ratio of the largest to the smallest input signal that the circuitry can process. For a programmable gain amplifier, the dynamic range will be measured as a ratio of highest input signal level (at lowest gain setting) and the largest referred input noise ever measured for any of the gain settings. A pulse width modulation output stage provides a digital output without the need for clock. The circuit is designed in a 0.18 m CMOS process and validated using post-layout simulations.

Floating current mirror is utilized to realize high current gain for amplifying weak current levels [13]. In Figure 1, transistor and are connected across the feedback loop of the amplifier. Transistor and are connected to the output node . The node connects to the negative input node of a following TIA or integrator stage which keeps at the exact same voltage potential as node or . Therefore, transistors and have the same and . The input current flows in or out through or , depending on the polarity of the current signal. Transistors and are sized N times as and , respectively. Therefore, the current through or is N times the input current signal. The capacitor and have the same ratio of N for high frequency current amplification as in Equation (1).
This architecture has the advantage that it provides high current gain so that the input-referred current noise at the input node from the following TIA or integrator is attenuated by the high current gain of this preamplification stage. However, this fixed high current gain would saturate the following TIA or integrator stage when the input current signal is large. The maximum input current is limited to the tens of nA range. In this paper, we design a programmable current preamplification stage to extend the input current signal range. This allows one to trade-off noise performance with a high dynamic range.

To allow processing of wide range (100 fA − 1 A) current signals, the gain of the current amplifier is designed to be programmable, and the gate control voltage of transistor and can be externally tuned to adjust to the different range of input currents. Two cascade current gain stages are implemented for a maximum of 1000×. This is designed to amplify currents as low as 100 fA. The first stage offers a maximum current gain of 50, while the second stage provides a maximum current gain of 20. The effective capacitor ratio and the effective transistor ratio are programmable to achieve different current gain for a high dynamic input current range as in Table 1.

To allow for a wide dynamic range at the input, the reference current feeds the clockless delta-sigma modulator (aka pulse width modulation stage). The reference current stage provides a selection of reference currents to the wide range input current signal. The tiny reference current is obtained by the current splitter architecture as in Figure 9 [15]. The attenuation gain is 10 in this design. The R2R topology provides the same voltage, so the current flowing in or out of this circuit will be linearly divided into two parts, according to the transistor size. Different scaled currents can be obtained from different transistor size ratios as in Table 2.
We use a simple divide-by-2 circuit to explain the operation of this circuit as in Figure 10. For a long-channel transistor, the drain current is proportional to the channel size . Based on this statement, in Figure 10a, the transistor with size is equivalent to the four identical transistors , , , and , with same size in a series-parallel configuration. The current I splits equally through each of the four transistors. Transistor and can be simplified as an equivalent transistor with a size of . Therefore, in Figure 10b, the transistor-based current split architecture by a factor of 2 is shown.

The comparator is a continuous-time circuit as shown in Figure 12 [16]. The internet positive feedback loop should be larger enough to enable the hysteresis performance. The hysteresis is 40 mV. The reference voltage and can be adjusted to select the integration voltage window.

The entire design is implemented in 0.18 m CMOS technology, and the total layout area is 1410 m × 720 m. The transistors and the capacitors of the current amplification stage consume most of the layout area in Figure 13.

The circuit was simulated with post-layout extraction. This captures the RC parasitic effects in addition to any coupling capacitance. The current gain for wide dynamic range input current and the noise performance are simulated. By controlling the digital codes, the current gain can be programmed to be 1000×, 100×, 10×, and 1× as in Figure 14. The proposed switch connections enable the flat current gain in various current gain settings.
With high current pre-amplification, the input-referred current noise at the input is given by Equation (5). Note that the noise from the integration stage has been attenuated by the current-amplification gain. The feedback transistors and the input stage amplifier dominate the input reference current noise contribution. is the shot noise from in Figure 8 operating in the subthreshold region. The voltage noise from the op-amp over the input capacitance sets the minimal noise of the circuit when the input current is small.
The equivalent input voltage noise from the front-end amplifier is shown in Equation (6). The pre-amplification stage from Figure 10 has a dominant noise contribution. k is Boltzmann constant, and K is a process related constant which influences the flicker noise.
The noise density and integrated noise simulation are shown in Figure 15 and Figure 16, respectively.
Table 3 lists the integrated noise (rms) with the signal bandwidth of 100 Hz, 10 KHz, and 1 MHz, and with the current gain of 1000×, 100×, 10×, and 1×, respectively. One can choose a fast operation mode for the small input current with some trade-off with the bandwidth, or one can process high bandwidth signal with a slower operation.
In Figure 17, sinusoidal signals of the amplitude of 100 fA (10 Hz), 1 nA (1 KHz), and 1 A (1 MHz) are used as the input signal, respectively, and results show that recovered signal matches well with the input signal [14].
Table 4 lists the proposed readout circuit performance and compares it with other recent state-of-the-art demonstrations. We added a new metric to the table; “Speed improvement factor”. It is defined as the improvement in output data rate from the use of variable gain settings. This can be estimated as follows. is the threshold voltage of the comparator, and is the integration capacitor. I is the integration current and is the integration time for the 1× current gain setting; 1000I is the integration current and is the integration time for the 1000× current gain setting. We can write Equations (7) and (8) for these two settings.
Equation (9) implies that the circuit can generate the output pulse at a rate 1000 times using the 1000× current gain setting.

This paper presents a low-noise current readout circuit using programmable gain setting switches to process a wide input range of currents of 140 dB. The switch arrangement for choosing the programmable gain has been proposed that introduces no phase distortion and it offers flat high-frequency gain. The programmable amplification current stage offers a fast operation of the small current signal and provides a large input dynamic range. The one-bit clockless delta-sigma modulator produces digital output, the input signal is calculated directly from the duty cycle of the pulse output signal. The current amplification enables a higher output data rate for smaller currents. Simulation results in a 0.18 m CMOS process to validate the performance. 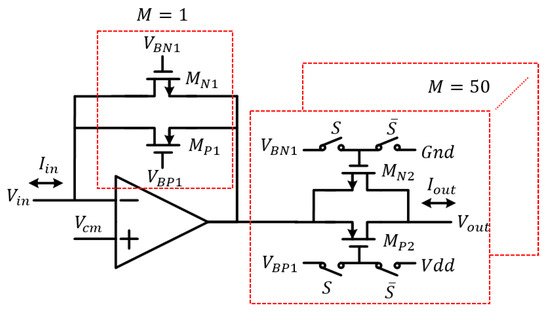 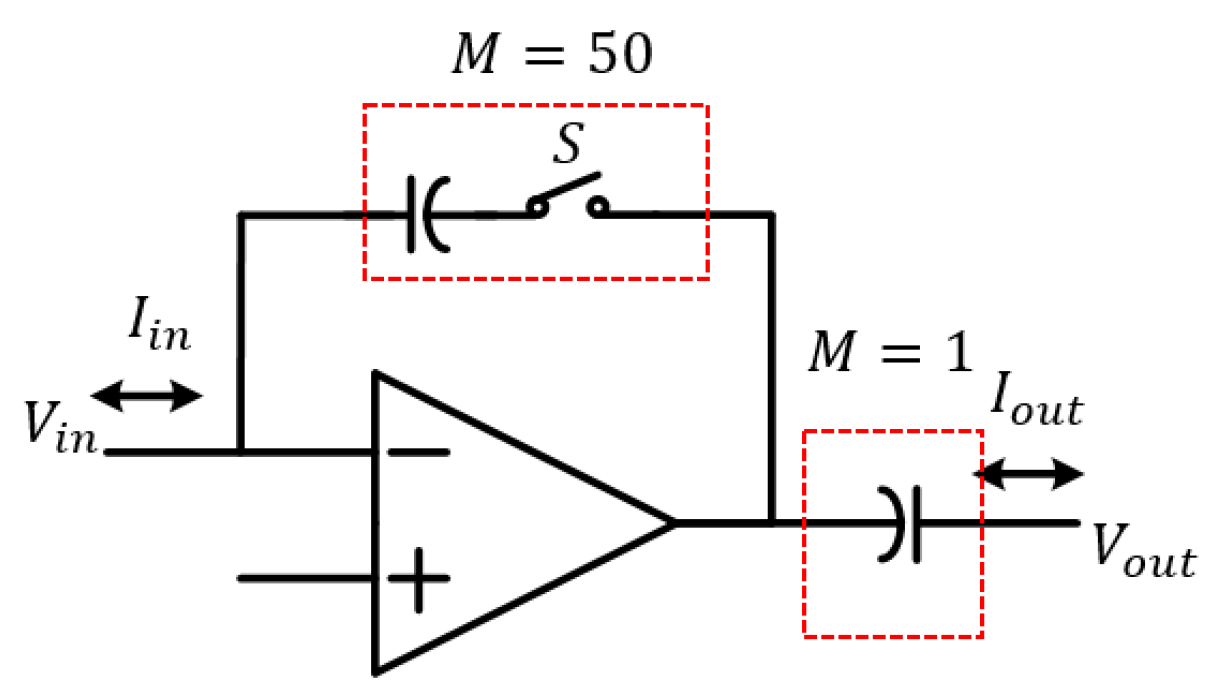 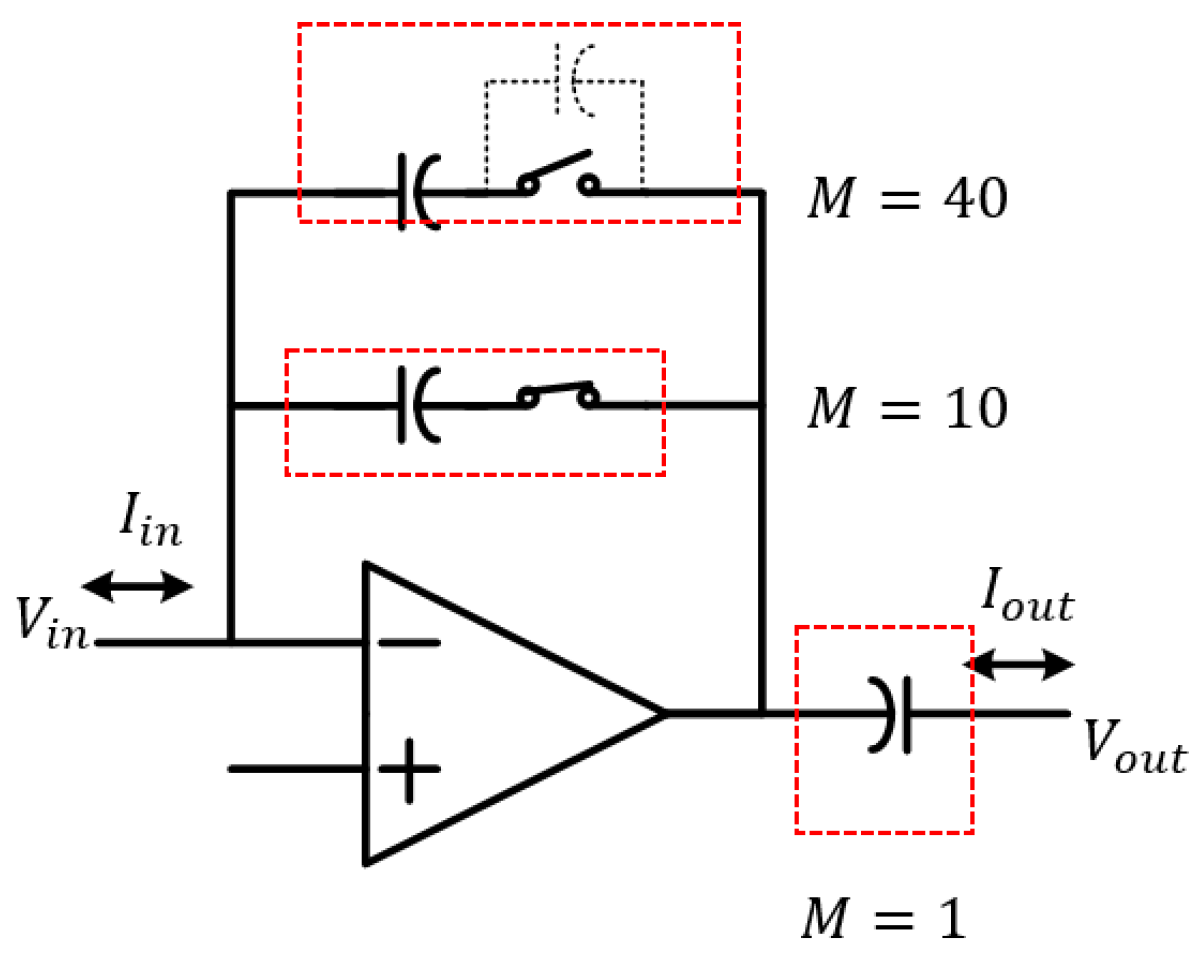 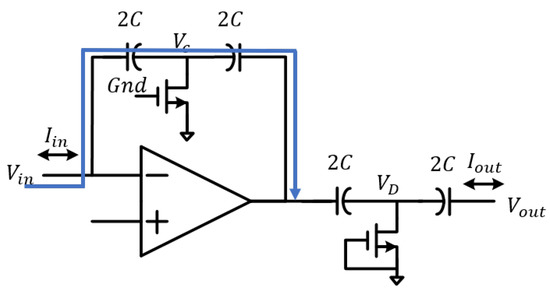 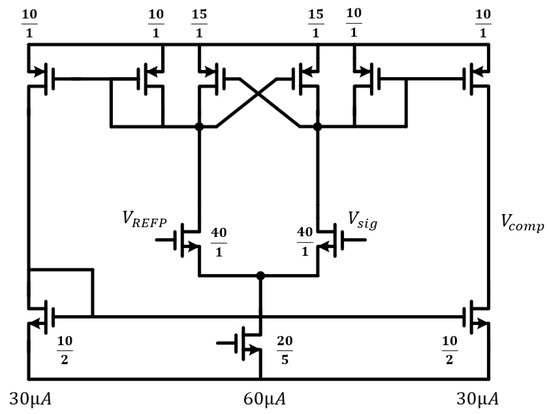 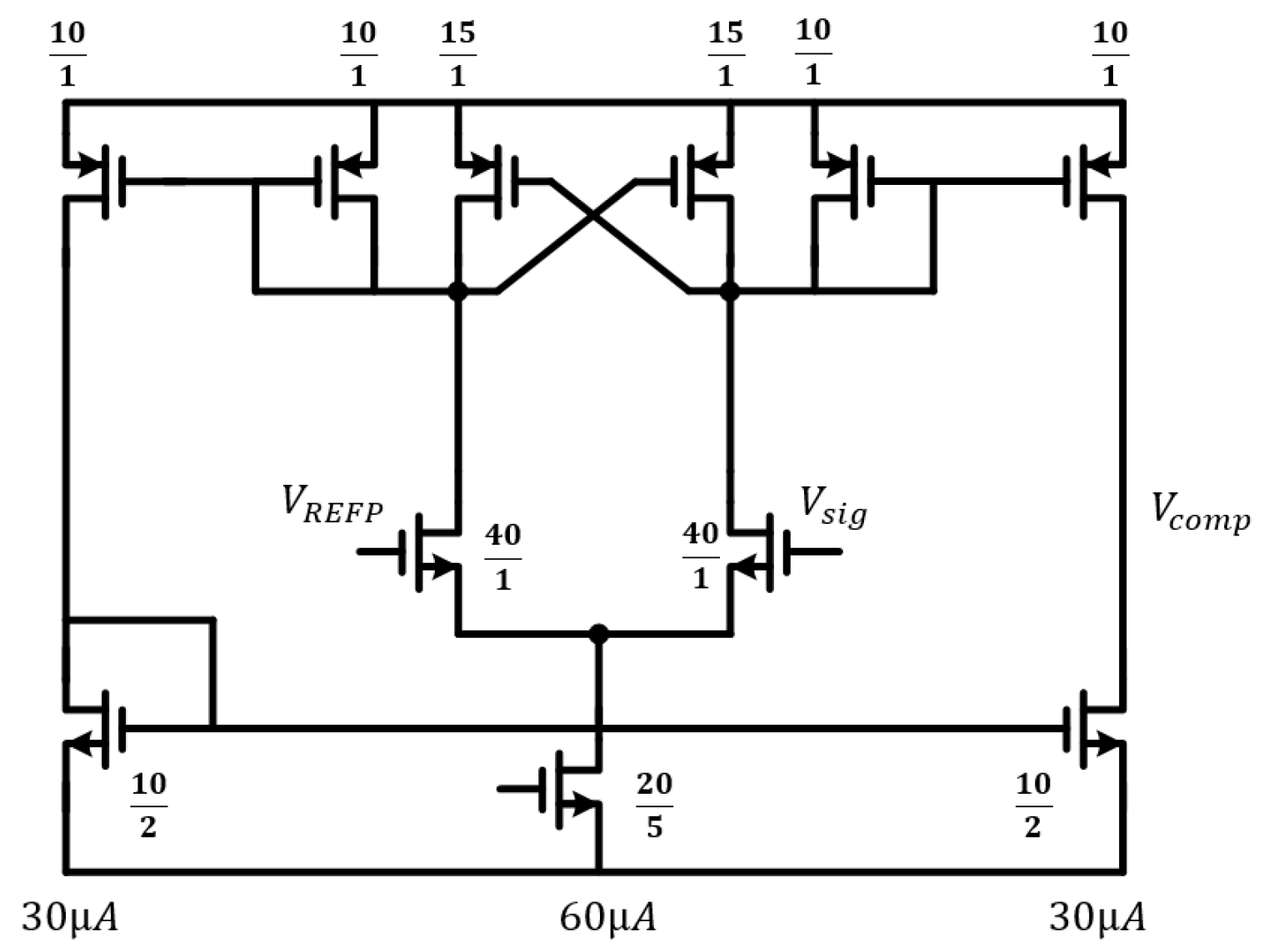 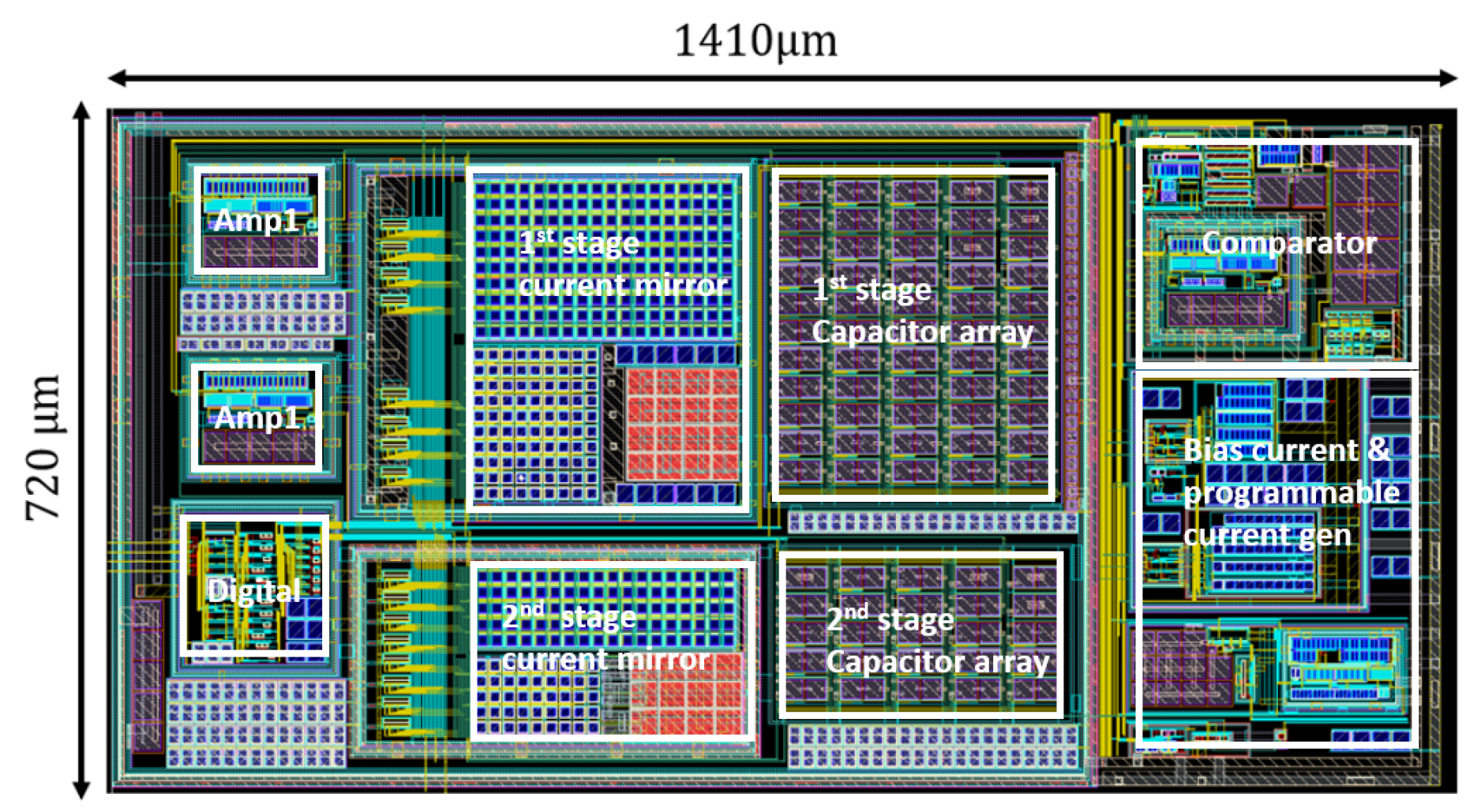 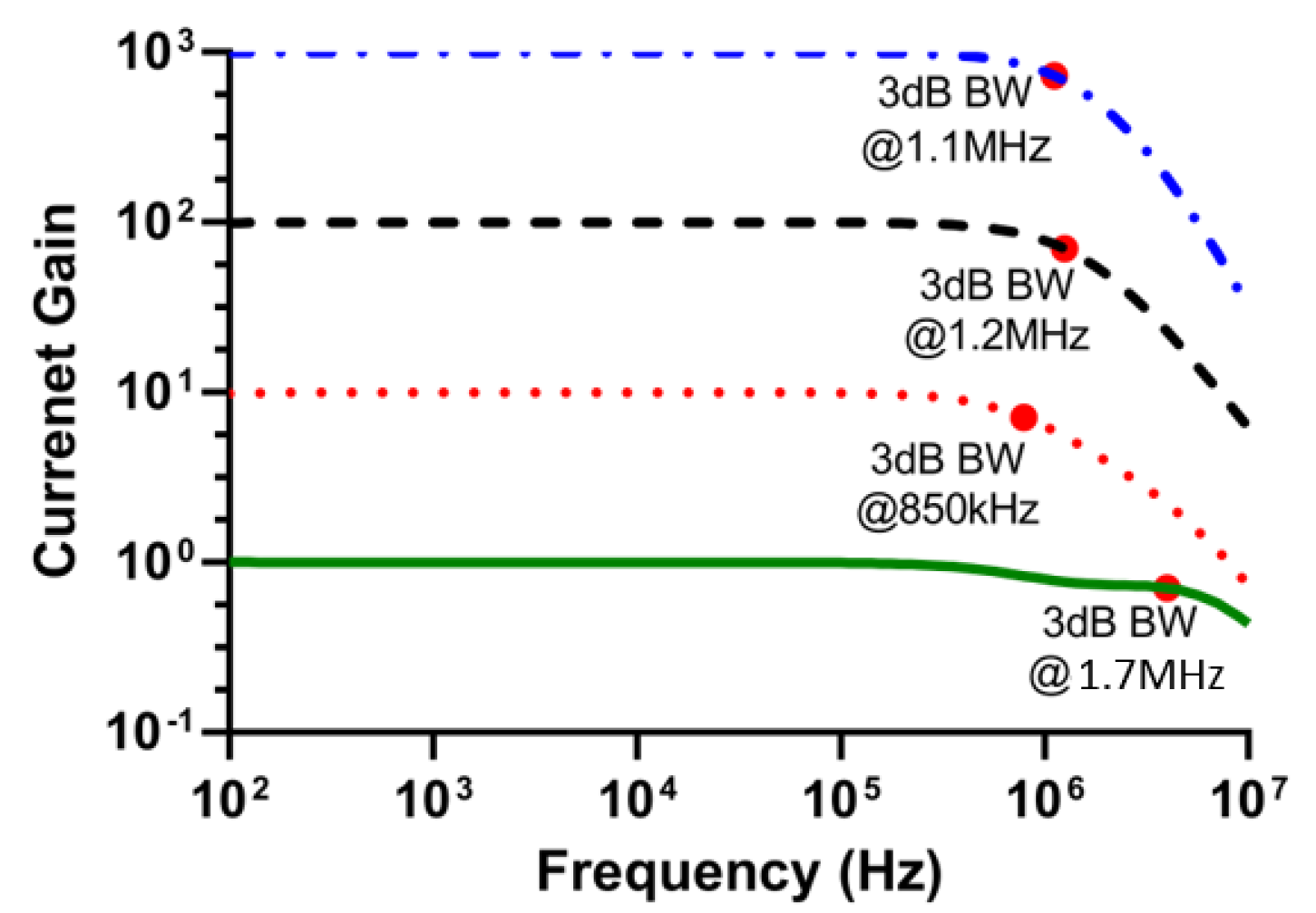 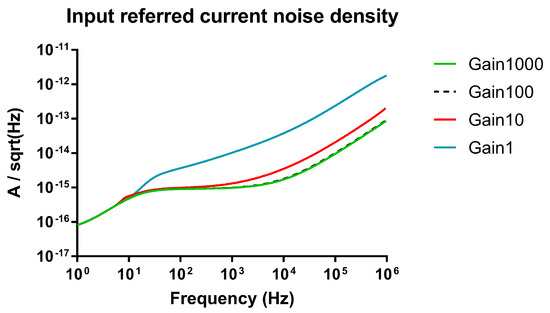 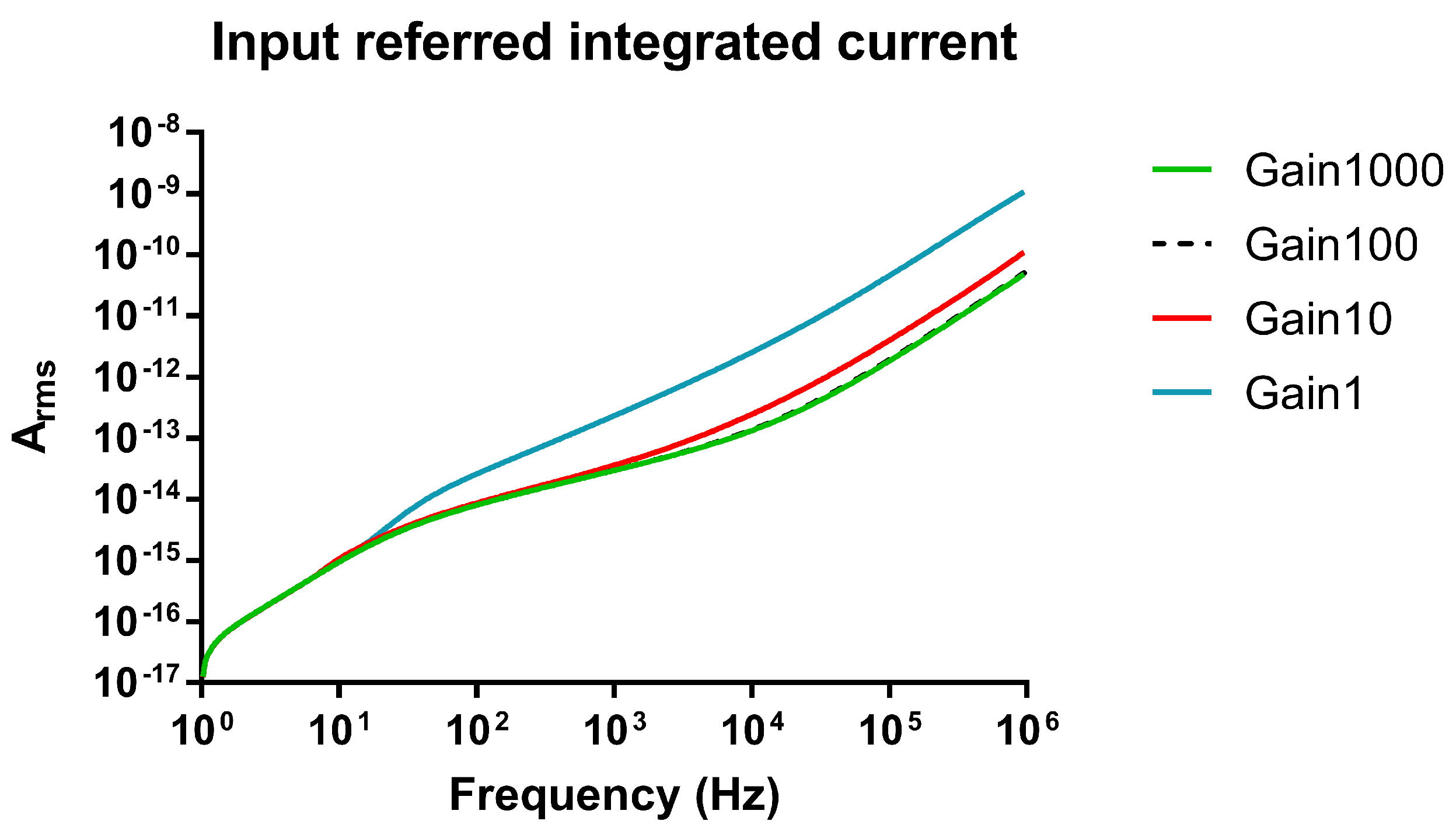 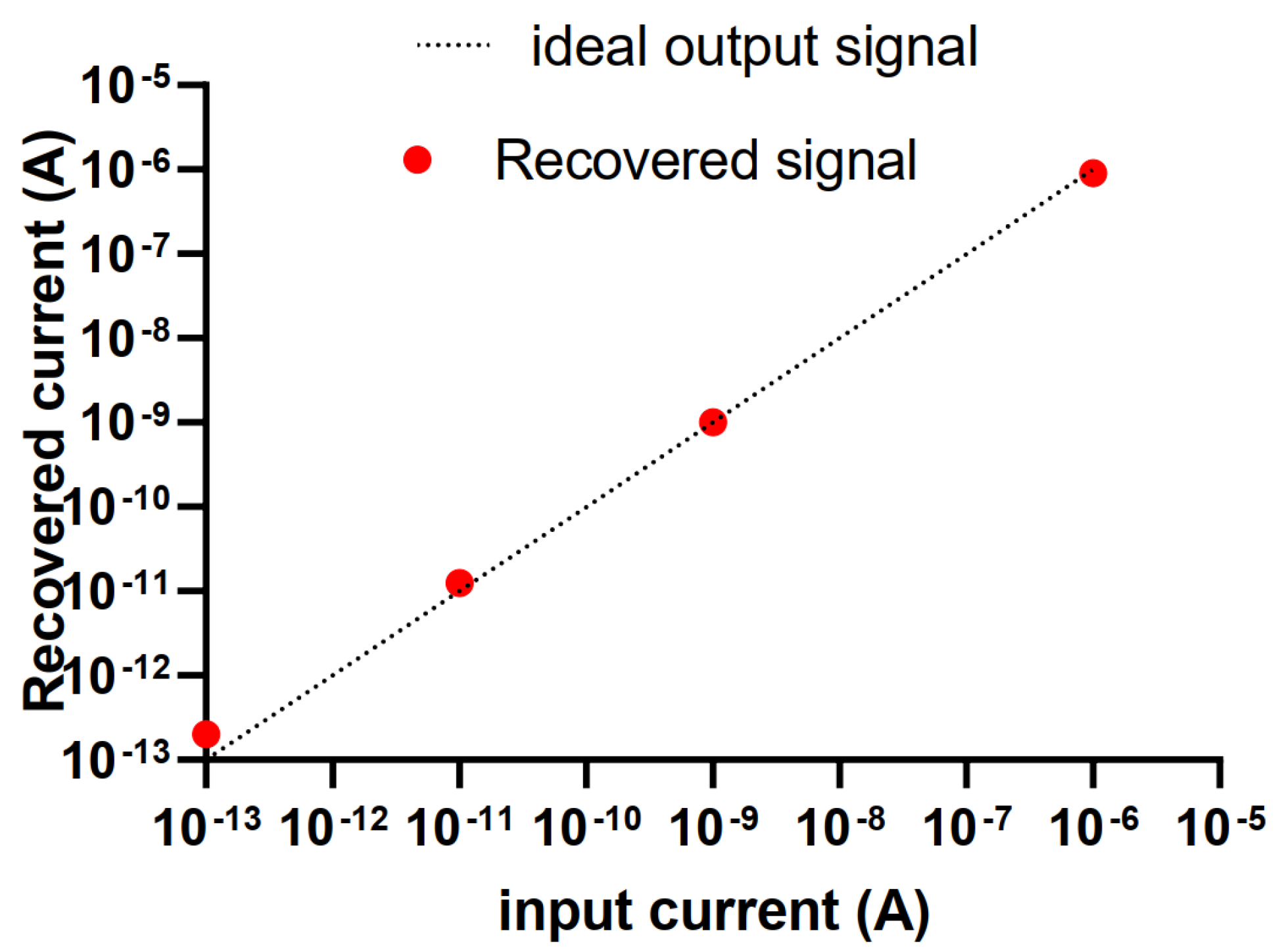 Table 4. Table of comparison with relevant architecture.
Table 4. Table of comparison with relevant architecture.
* Simulation result.
© 2020 by the authors. Licensee MDPI, Basel, Switzerland. This article is an open access article distributed under the terms and conditions of the Creative Commons Attribution (CC BY) license (http://creativecommons.org/licenses/by/4.0/).
We use cookies on our website to ensure you get the best experience. Read more about our cookies here.
Accept
We have just recently launched a new version of our website. Help us to further improve by taking part in this short 5 minute survey here. here.
Never show this again