A Brief Theory of Epidemic Kinetics

This article describes a simple Susceptible Infected Recovered (SIR) model fitting with COVID-19 data for the month of March 2020 in New York (NY) state. The model is a classical SIR, but is non-autonomous; the rate of susceptible people becoming infected is adjusted over time in order to fit the available data. The death rate is also secondarily adjusted. Our fitting is made under the assumption that due to limiting number of tests, a large part of the infected population has not been tested positive. In the last part, we extend the model to take into account the daily fluxes between New Jersey (NJ) and NY states and fit the data for both states. Our simple model fits the available data, and illustrates typical dynamics of the disease: exponential increase, apex and decrease. The model highlights a decrease in the transmission rate over the period which gives a quantitative illustration about how lockdown policies reduce the spread of the pandemic. The coupled model with NY and NJ states shows a wave in NJ following the NY wave, illustrating the mechanism of spread from one attractive hot spot to its neighbor.
Keywords: COVID-19; New York; New Jersey; SIR models; Network COVID-19; New York; New Jersey; SIR models; Network

2.1. Fitting the Total Number of Infected People and the Number of Deaths

Data from total infected people and total number of deaths in New York state are available at the New York times web site, see [20]. We downloaded the data from there from 1 March to 1 April, which makes 32 days. We reported the number of total cases in Table 1 and the number of deaths in Table 2.
For numerical simulations of Equation (2), the parameter r was set to . Then, in order to fit the data of the total number of infected people, we chose: and to fit the total number of deaths, we chose:
Initial conditions were set to 19453556 being the number of people living in NY state in 2019 according to USA Census bureau. Regarding reported data in Table 1 and Table 2, as a matter of fact, not all infected people in March 2020 were tested. To take into account this fact in our model, we adjusted the parameters to fit the quantity from the model, with the total number of infected people (data in Table 1) minus the total number of deaths (data in Table 2), i.e., we assumed here that only 20 percent of living people that have contracted the virus has been tested positive. Note that shortly after the first submission of this work, NY state reported the result of a random antibody test over a sample of 3000 individuals. Statewide, 13.9 percent of people tested positive, ranging form 21.2 percent in New York City (NYC), to 3.6 percent in upstate counties. See [21,22]. Comparing with data from [20], this gave a ratio of approximatively 10; only about 10 percent of people having caught the virus in NY would have tested positive. Statistical estimates of related ratio, depending on the number of estimates provide a range of , see [23]. Simulation of system (2), and comparison with data resulting from Table 1 and Table 2 are plotted in Figure 1a. In Figure 1b, we plotted the total number of deaths from the model and compared it to the data. In Figure 1c, we have plotted four curves corresponding to various for different simulations of (2).
For reader’s convenience, these values are summarized in Table 3. This panel illustrates how the health policies flatten the curve. In Figure 1d, we have again plotted the solution for as in (3), for a longer period.

2.2. Fitting the Total Number of People at Hospital

Next, we have retrieved data corresponding to the number of people at the hospital between 16 March and 1 April, see Table 4. During this period, and after, NY state officially reported daily useful charts and statistics, on the local spread. We then computed an estimation of people being effectively at hospital at a given date. We denote the total number of hospitalizations at a given date. In order to fit the solution of (2) with this data, we performed a linear regression between and . The coefficients a and b of the linear regression were determined by the least-square method, leading to the formulas: with
The result is plotted in Figure 2a. It clearly shows a good approximation by two distinct lines, corresponding to and
Then, a prevision of number of people needing hospitalization can be provided by the formula:
The result is plotted in Figure 2b.

Summing up the equations in (2) and looking for stationary solutions yield the following theorem.
Theorem 1.
We assume that initial condition of system (2) satisfies and . Then for , all variables remain bounded and positive: there exists a positive constant such that for all :and
Non-negative stationary solutions of the system are given by , with and . Furthermore, is decreasing, is increasing and the variation of is given by the sign of
Remark 1.
It is worth noting that this theorem, whose proof is relatively straightforward, provides two simple but relevant interpretations from the applicative point of view. The first thing is that the stationary solutions are given by , with and . This means that the stationary solutions, are all with 0 infected but may take arbitrary non-negative values (within a bounded interval) for susceptible and recovered. This reflects the reality of the disappearance of the virus. The second thing we want to mention is that the variation of I is given by the sign of expression (5). In particular, basically during a classical wave, this sign will be positive before the apex and negative after.

It is estimated that around 400,000 people used to commute from NJ to NY before the lockdown policies due to the pandemic. It is natural to integrate these effects in the model, since those commuters played the role of vector for virus before the lockdown. We therefore built a small network by coupling two nodes, representing NY (node 1) and NJ (node 2). To this end, we coupled two copies of the local model (2) to take into account the daily fluxes between those two states. This led to the following model:
The assumptions are analogous to those given Section 2, but we aimed here to take into account the daily fluxes between NJ and NY. For sake of simplicity, we considered that there was a flux of people coming from NJ to NY in the morning and returning home at night. The coupling functions, which are non-autonomous here are given by: for node 1 and for node 2, where functions stand for the densities of population coming from mode j and going into node i. In the remaining of the manuscript we assume that these functions do not depend on and R and drop the superscripts. Furthermore, we assume and to be periodic of period 1 (one day), with a Gaussian profile and respective apex at 8:30 am and 6:30 pm. Note that the amplitude is multiplied by a coefficient greater than 1, in comparison with to take into account the amount of population int NY and NJ. We want to emphasize here the attractivity of NYC, and therefore assume that the fluxes are mainly from NJ to NY in the morning and form NY to NJ in the evening. The function integrates policies of lockdown: after March 23, in the model, the daily fluxes are divided by 1000. Therefore, the function is a piecewise constant function given by:
Initial conditions were set to for node 1 and for node 2. Note there are no infected cases at initial time in NJ. This means that in our model, initial spread in NJ follows from infection in NY. The same methods as in Section 2 were used to fit the data for both NY and NJ for the network model (6). Illustrations are provided in Figure 3. It shows how the model fits the data. In Figure 3a, we have plotted the quantity as a function of time in red. Recall that, in the model , represents the number of people in the population which has been infected by the virus and are still alive. The blue dots correspond to the data retrieved from [20] and plots the total number of infected minus the number of total deaths. Analogously, in Figure 3b we have plotted the quantity as a function of time, in red. The blue dots correspond to the data retrieved from [20]. Finally, Figure 3c illustrates and , which represent respectively the infected population in NY and NJ. It shows how the curve of NJ follows the curve in NY, with a small attenuation.
An analog theoretical result as in Section 2 holds for solutions of (6).
Theorem 2.
We assume that initial condition of system (6) satisfies , , and . Then for , all variables remain bounded and positive: there exists a positive constant such that for all :and
For any non-negative , the following functions satisfying for are solutions of (6). Furthermore, is decreasing, is increasing and is non-increasing if and only if
Remark 2.
As in Remark 1, we want to point out some interpretation of this theorem in the context of the pandemic. Here, we have described some solutions with free epidemic component (). Note that in this case however, and are not constant since they vary according to the fluxes between the two nodes. Again the last inequality, quantifies the idea that when the spread of the virus becomes lower than the death and recovery the infected population starts to decrease. The difference here is that we take into account the two nodes together.

In this article, we have considered a simple non-autonomous SIR model to fit the data of COVID-19 in New York state. The model illustrates and quantifies how acting on the control allows us to flatten the curve of infected people over the time. From the model, using classical statistical methods, it is then possible to provide predictions of the number of people in needs of hospitalization. Lastly, we have fitted data from NJ state thanks to a coupled SIR model taking into account the daily fluxes between NJ and NY. It allows us to predict similar dynamics in NY and NJ, with a delay and small attenuation. Note that, despite its simplicity, our model fits, as good as more sophisticated models, the available data during the growing phase of March 2020. In a forthcoming work, we aim to fit data with the model over a longer period. This would provide an accurate estimation of the different parameters.

B.A. and M.A.A.-A. set up the mathematical model, performed the research, provided the mathematical analysis and wrote the paper; B.A. did the numerical simulations. All authors have read and agreed to the final version of the manuscript.

This research has been in part funded by CNRS, International Emerging Action program. 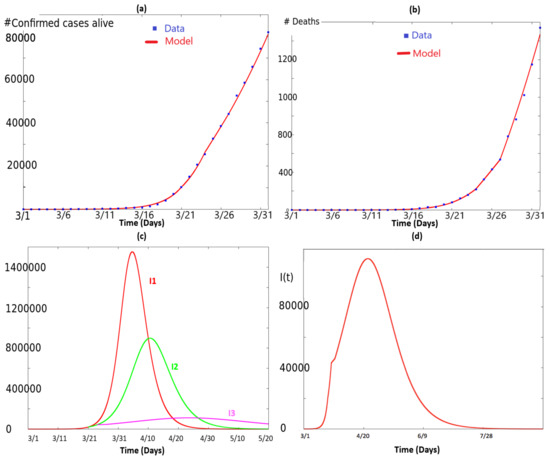 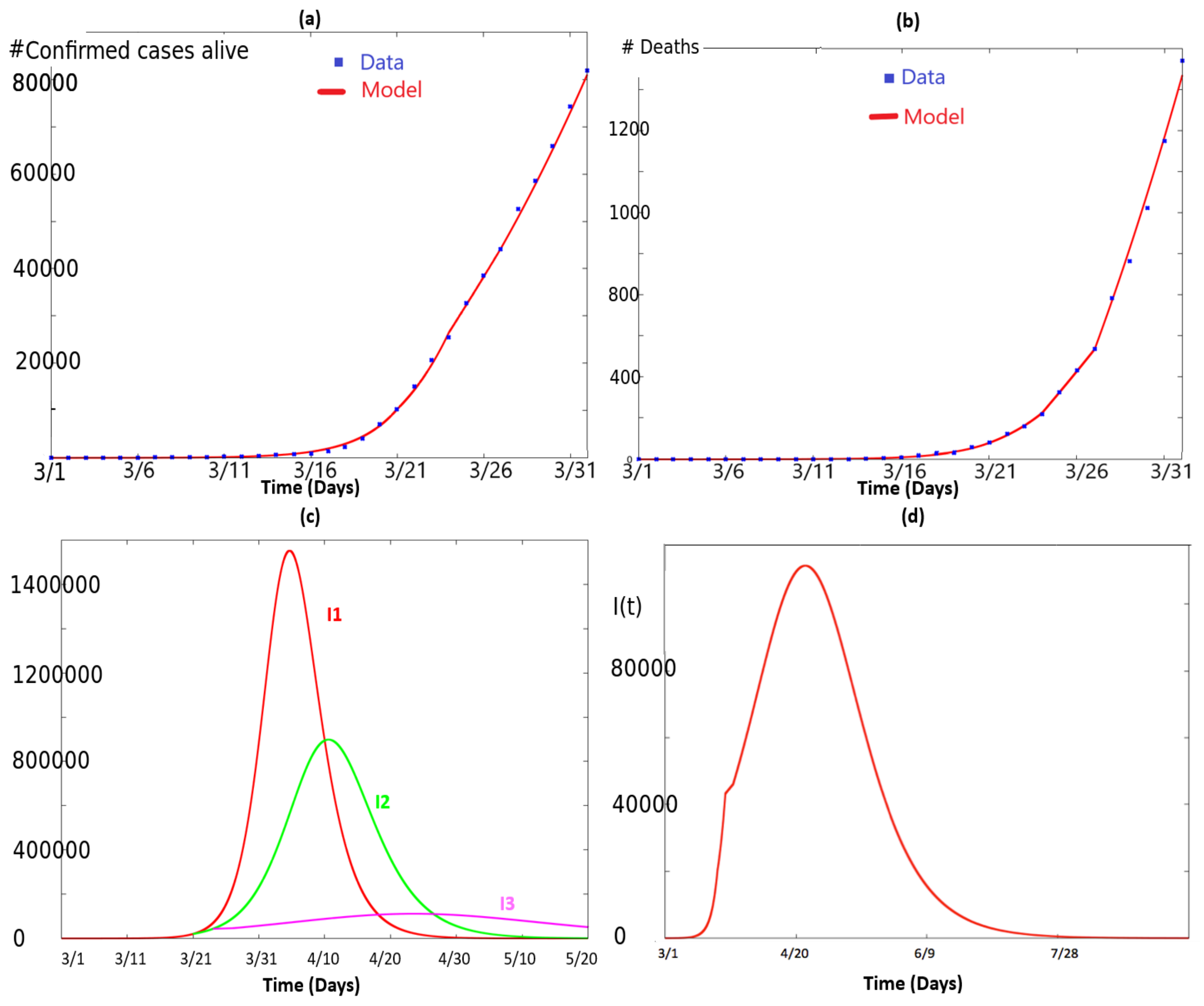 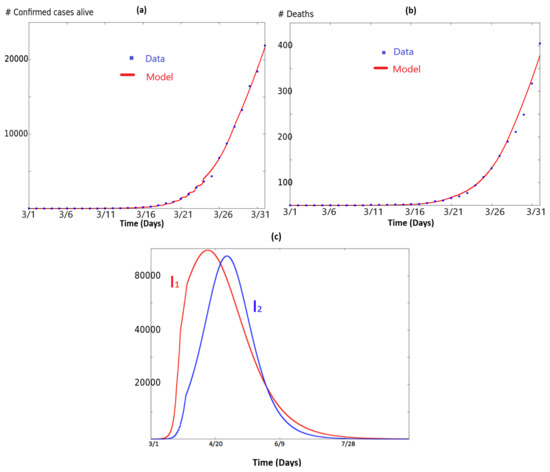 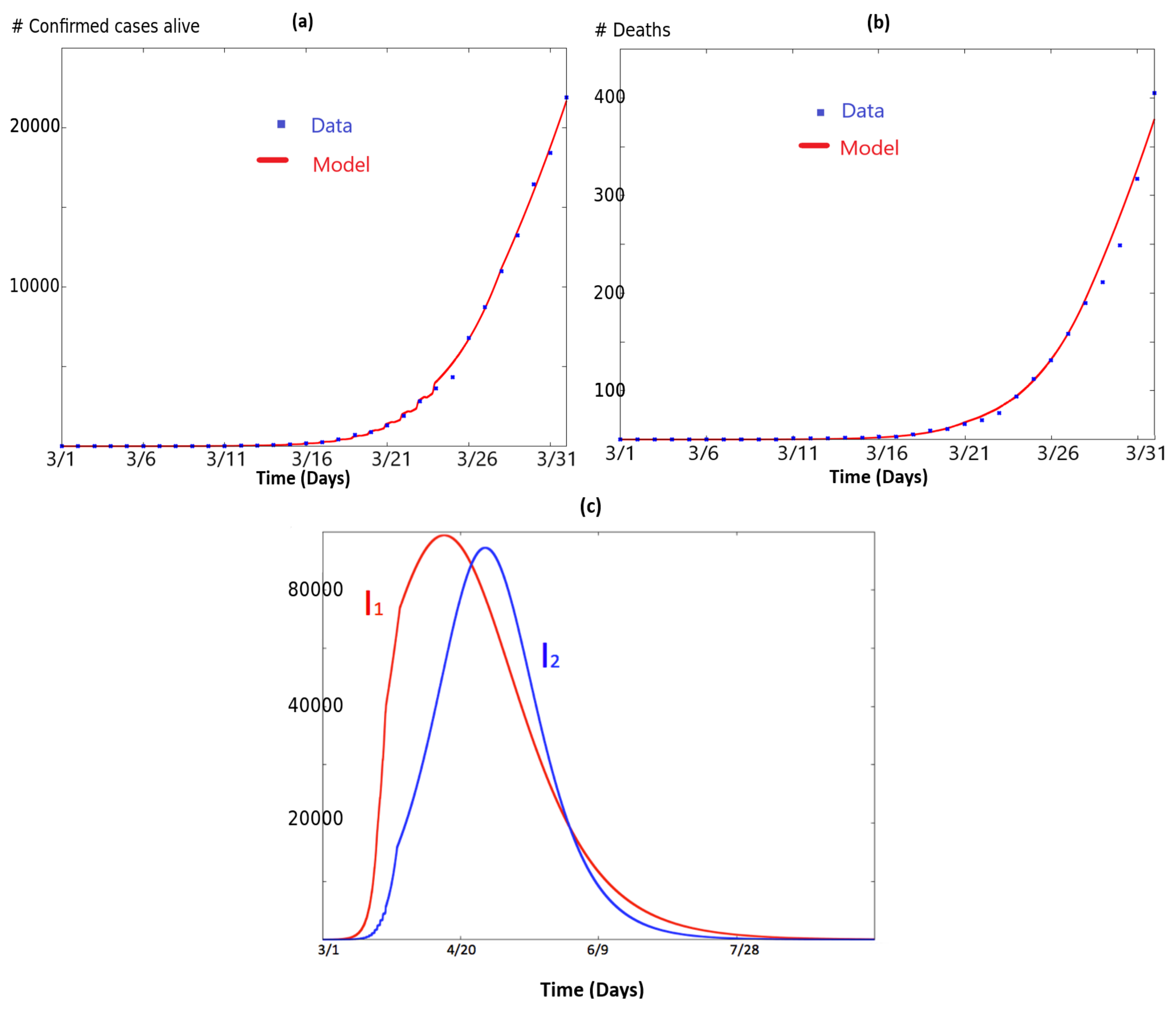