The Role of Mitochondria in Cardiovascular Diseases
Previous Article in Journal

Recent studies involving microbial communities in termite mounds have been more focused on bacteria and fungi with little attention given to archaea, which play significant roles in nutrient cycling. Thus, we aimed at characterizing the archaeal taxonomic and functional diversity in two termite mound soils using the shotgun sequencing method with the assumption that termite activities could promote archaeal diversity. Our findings showed that termite mound soils have archaeal groups that are taxonomically different from their surrounding soils, with Euryarchaeota, Korarchaeota, and Nanoarchaeota being predominant while Thaumarchaeota and Crenarchaeota were predominant in the surrounding soils. Additionally, the observed nutrient pathways: phosphorus, nitrogen, and sulfur were all significantly more predominant in termite mound soils than in their comparative surrounding soils. Alpha diversity showed that archaea were not significantly different within termite mound soils and the surrounding soils. The beta diversity revealed significant differences in the archaeal taxonomic composition and their functional categories between the termite mounds and surrounding soils. Our canonical correspondence analysis revealed that the distribution of archaeal communities was likely dependent on the soil properties. Our results suggested that termite activities may promote the diversity of archaea; with some of our sequences grouped as unclassified archaea, there is a need for further research to unveil their identity. View Full-Text
Keywords: bioturbators; Illumina MiSeq; shotgun sequencing; soil physicochemical properties; South Africa; termitarium bioturbators; Illumina MiSeq; shotgun sequencing; soil physicochemical properties; South Africa; termitarium
►▼ Show Figures 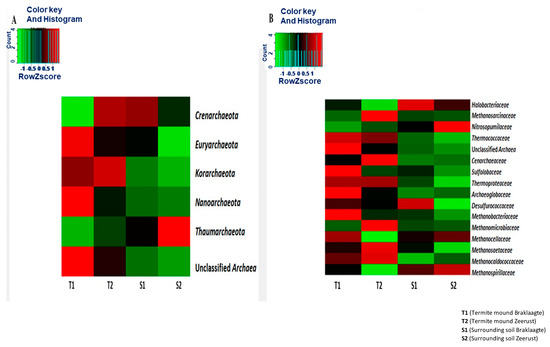