A combined metatranscriptomic and metagenomic study of Vostok (Antarctica) ice core sections from glacial, basal, and lake water accretion ice yielded sequences that indicated a wide variety of species and possible conditions at the base of the glacier and in subglacial Lake Vostok. Few organisms were in common among the basal ice and accretion ice samples, suggesting little transmission of viable organisms from the basal ice meltwater into the lake water. Additionally, samples of accretion ice, each of which originated from water in several locations of the shallow embayment, exhibit only small amounts of mixing of species. The western-most portion of the embayment had very low numbers of organisms, likely due to biologically challenging conditions. Increasing numbers of organisms were found progressing from west to east, up to approximately 7 km into the embayment. At that point, the numbers of unique sequences and sequence reads from thermophilic, thermotolerant, psychrophilic, and psychrotolerant organisms increased dramatically, as did sequences from alkaliphilic, alkalitolerant, acidophilic, and acidotolerant sequences. The number of unique and total sequences were positively associated with increases in concentrations of Na+, Ca2+, Mg2+, SO42−, Cl−, total amino acids, and non-purgeable organic carbon. The numbers of unique sequences from organisms reported from soil, sediment, ice, aquatic, marine, animal, and plant (probably pollen) sources also peaked in this region, suggesting that this was the most biologically active region. The confluence of the high numbers of organisms, physiologies, and metabolic capabilities suggests the presence of energy and nutrient sources in the eastern half of the embayment. Data from the main basin suggested a cold oligotrophic environment containing fewer organisms. In addition to bacteria, both the basal ice and accretion ice contained sequences from a diverse assemblage of eukaryotes, as well as from bacteria that are known to be associated with multicellular eukaryotes. View Full-Text
Keywords: Lake Vostok; subglacial lake; metatranscriptomic; metagenomic; marine; aquatic Lake Vostok; subglacial lake; metatranscriptomic; metagenomic; marine; aquatic
►▼ Show Figures 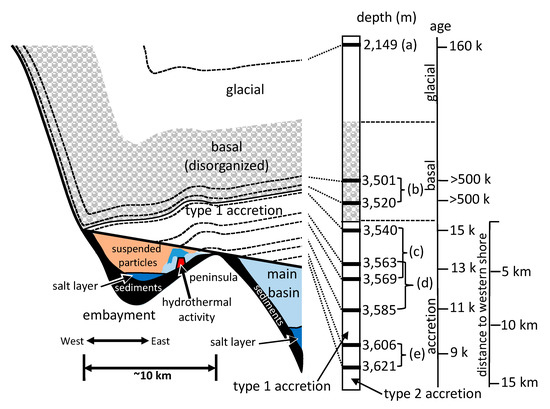