The commensal bacteria Escherichia coli causes several intestinal and extra-intestinal diseases, since it has virulence factors that interfere in important cellular processes. These bacteria also have a great capacity to spread the resistance genes, sometimes to phylogenetically distant bacteria, which poses an additional threat to public health worldwide. Here, we aimed to use the analytical potential of MALDI-TOF mass spectrometry (MS) to characterize E. coli isolates and identify proteins associated closely with antibiotic resistance. Thirty strains of extended-spectrum beta-lactamase producing E. coli were sampled from various animals. The phenotypes of antibiotic resistance were determined according to Clinical and Laboratory Standards Institute (CLSI) methods, and they showed that all bacterial isolates were multi-resistant to trimethoprim-sulfamethoxazole, tetracycline, and ampicillin. To identify peptides characteristic of resistance to particular antibiotics, each strain was grown in the presence or absence of the different antibiotics, and then proteins were extracted from the cells. The protein fingerprints of the samples were determined by MALDI-TOF MS in linear mode over a mass range of 2 to 20 kDa. The spectra obtained were compared by using the ClinProTools bioinformatics software, using three machine learning classification algorithms. A putative species biomarker was also detected at a peak m/z of 4528.00. View Full-Text
Keywords: antibiotics; bacterial resistance; one health; MALDI-TOF MS; biomarkers antibiotics; bacterial resistance; one health; MALDI-TOF MS; biomarkers
►▼ Show Figures 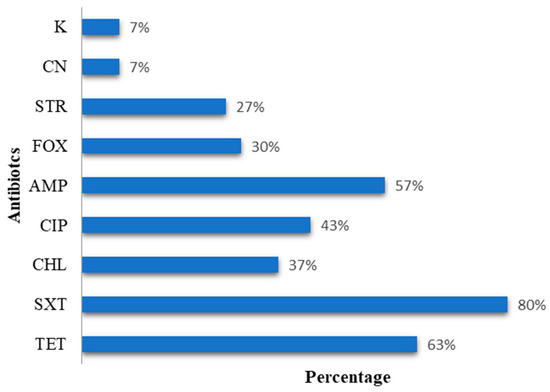