While no doubt thought about for thousands of years, it was Antoine Lavoisier in the late 18th century who is largely credited with the first “modern” investigations of biological energy exchanges. From Lavoisier’s work with combustion and respiration a scientific trend emerges that extends to the present day: the world gains a credible working hypothesis but validity goes missing, often for some time, until later confirmed using proper measures. This theme is applied to glucose/glycogen metabolism where energy exchanges are depicted as conversion from one form to another and, transfer from one place to another made by both the anaerobic and aerobic biochemical pathways within working skeletal muscle, and the hypothetical quantification of these components as part of an oxygen (O2) uptake measurement. The anaerobic and aerobic energy exchange components of metabolism are represented by two different interpretations of O2 uptake: one that contains a glycolytic component (1 L O2 = 21.1 kJ) and one that does not (1 L O2 = 19.6 kJ). When energy exchange transfer and oxygen-related expenditures are applied separately to exercise and recovery periods, an increased energy cost for intermittent as compared to continuous exercise is hypothesized to be a direct result. View Full-Text
Keywords: oxygen uptake; anaerobic energy costs; glycolysis; EPOC oxygen uptake; anaerobic energy costs; glycolysis; EPOC
►▼ Show Figures 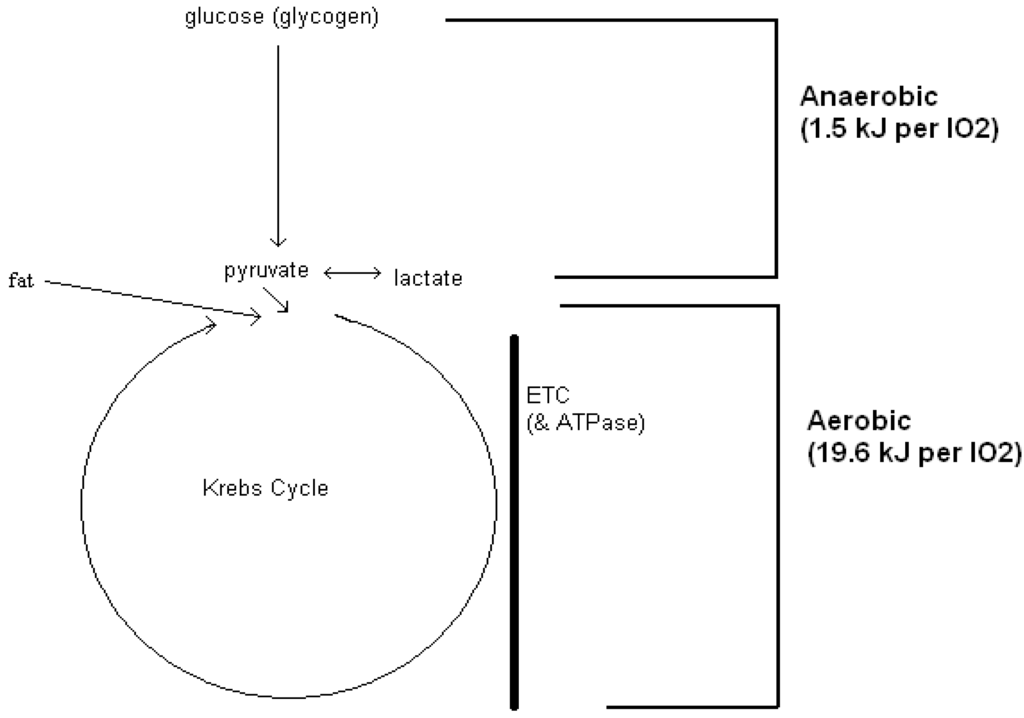 
Scott, Christopher B. 2014. "Combustion, Respiration and Intermittent Exercise: A Theoretical Perspective on Oxygen Uptake and Energy Expenditure." Biology 3, no. 2: 255-263.